Aiming to be the big new festival to end the year with a bang, LA3C held its inaugural event at the LA State Historic Park despite the gloomy weather. Advertised as a curation of the best-in-class experiences of music, food, and bold interactive art from some of the world’s best artists, expectations were high from the very start.

The SHE Meaningful Marketplace acted as a small business marketplace, with booths selling handmade soaps, accessories, tote bags, and more, located right at the entrance of the event. The Dining Discovery zone, which was right behind the marketplace, featured various food booths and food trucks. Aside from these two sections, everything else was scattered throughout the festival. While having food and drinks throughout the event made it convenient for fans who were waiting in front of the main stage, it was unfortunate that the art installations were also scattered about. With such a huge emphasis on working with local artists to curate beautiful installations for the event, it was disappointing to see there were only a few, and were all located in different spots without much explanation, making it difficult to tell what they were for anyone who wasn’t specifically looking for them.

LA3C also advertised its involvement with various local charities, including Film Independent and Heart of Los Angeles (HOLA). These organizations had informational booths tucked in with other sponsor booths. Introduced by Mingyu and Vernon, members of K-pop group SEVENTEEN, scientist and conservationist Dr. Jane Goodall made a surprise guest appearance onstage in between musical performances to greet attendees. Dr. Goodall spoke to the crowd regarding the importance of taking care of our planet, but her inspirational speech was not met so kindly, as the crowd continued shouting and heckling to the point where she asked the crowd to “shut up and listen.” Her unexpected speech in between SEVENTEEN and Snoop Dogg’s sets left the crowd confused and uninterested, as they were more focused on the musical performances.

Regardless of the food, market, art, and charities, the primary focus of the festival is the music. The main LA3C stage and side stage for DJs, known as the Hot Import Nights stage, were located on opposite ends of the venue, and the overall vibe of each stage was also vastly different. The HIN stage was surrounded by various modified sports cars, as part of the signature HIN look, and a few sponsor booths and art pieces. Meanwhile, the main stage was flanked by two large screens, and various food, beverage, and merchandise booths, with one or two art pieces scattered around. However, both stages themselves were quite plain, with no extended walkway. Even so, each act made up for the simple stages with their passion and stage presence. 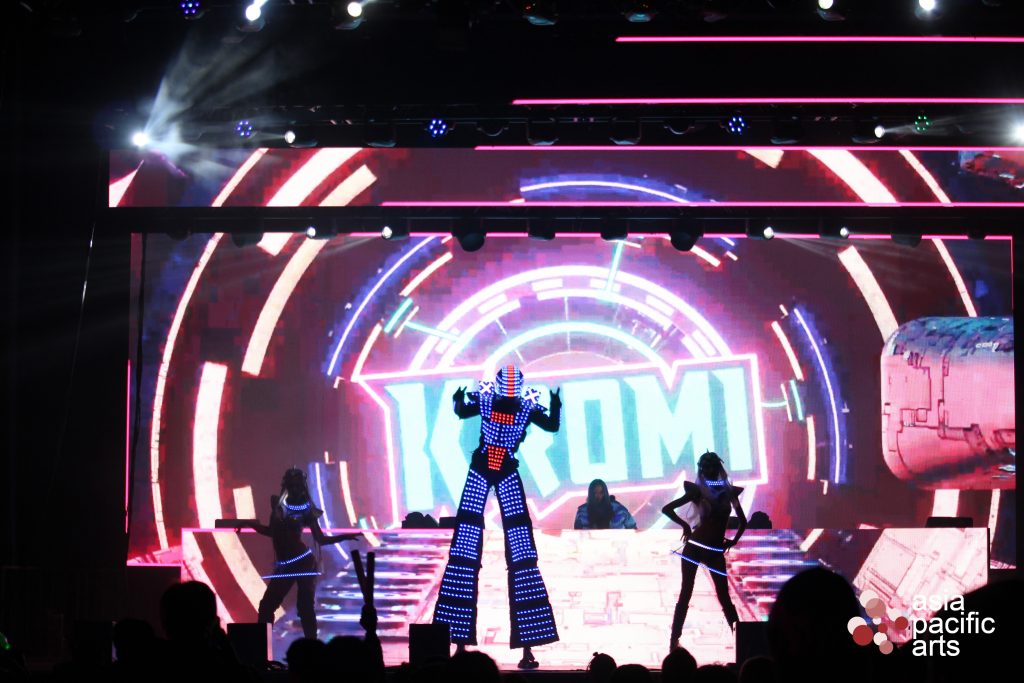 DJs from all around the world were featured acts on the HIN stage, and all of the featured Asian DJs were also women, aside from Matt Nguyen, half of the EDM power couple Arius. Freya Fox, Kim Lee, Peach, Meirlin, Accia, Cam Girl, Kromi, and industry veteran TOKiMONSTA all had their own sets, adding their own personal touch to their stages. Freya Fox, who is a gamer-turned-DJ, premiered her new song, “I’m Too Free,” during her set. Joining the crowd during other performances, Freya shared how much she loves supporting the other acts, especially with so much Asian representation on the stage, as every performer deserves an audience.

Kim Lee’s performance was paired with dancers, some on stilts holding up hearts, and Peach’s set featured a dancer spinning around in a giant ring. Meirlin kicked off her set with a remix of Mariah Carey’s “All I Want for Christmas Is You,” and Accia brought acrobatic dancers to the stage during the last 15 minutes of her set. Cam Girl started her set off with a few friends on stage with her, telling the crowd to get ready to party, and dynamic duo Arius hyped each other up, filling the stage with their energy. Kromi performed to a full crowd, featuring some dancers wearing glow sticks and a large glowing man during the first half of her set. The Chinese DJ also impressed fans with a mix of BLACKPINK’s “Pink Venom,” coming to the front of the stage to dance during the song. TOKiMONSTA closed out the HIN stage for the weekend, a perfect final act as one of the DJs who helped pave the way for so many Asian women DJs. Playing her signature sound, which mixes tranquil melodies and EDM, TOKiMONSTA was the best way to end a weekend of partying. While daytime performances at the HIN stage saw only a few people in the crowd, nighttime stages gathered crowds nearing 1,000 attendees. 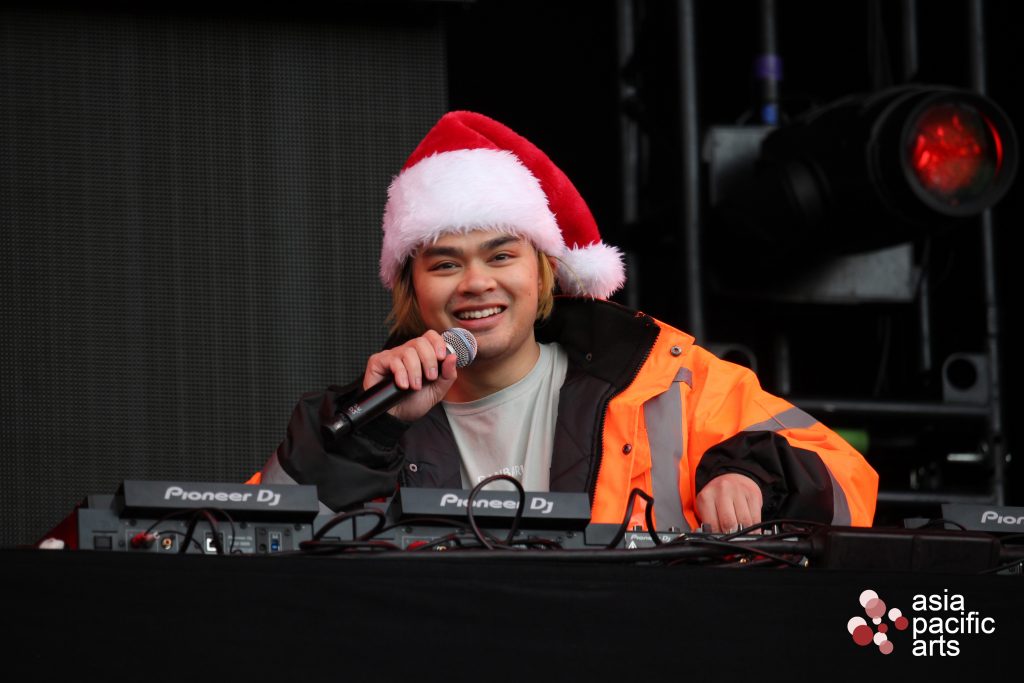 Over by the main stage, fans crowded around in anticipation of the musical acts to perform. Shawn Wasabi, who was there for his first ever live performance in Los Angeles, kicked off the festivities for the weekend, performing never-before-heard music and bringing out special guest Sophia Black during his set. Although early on in the day, his performance brought plenty of energy, as he jumped around with his Santa hat on while working the turntable. He was met with the same energy, as attendees cheered loudly throughout his set.

The highlight performance of the event was undoubtedly SEVENTEEN, though not just for their amazing stage presence, but also for their fans, known as Carats, and their dedication to supporting the group at the festival as well. Attempting to camp overnight despite the less-than-savory neighborhood, fans showed up and showed out for the K-pop group. Countless fans dressed as the members or as tigers in support of member Hoshi, and each one was armed with a lightstick and fan banner. Sprinting straight to the barricade, Carats stood there for five hours waiting for the group, yet still kept up their energy for every performer on stage, supporting them even if unsure of who they were. The house DJ played a variety of K-pop songs between sets to pass the time, ranging from MONSTA X’s “Middle of the Night” to LE SSERAFIM’s “Anti-Fragile.” 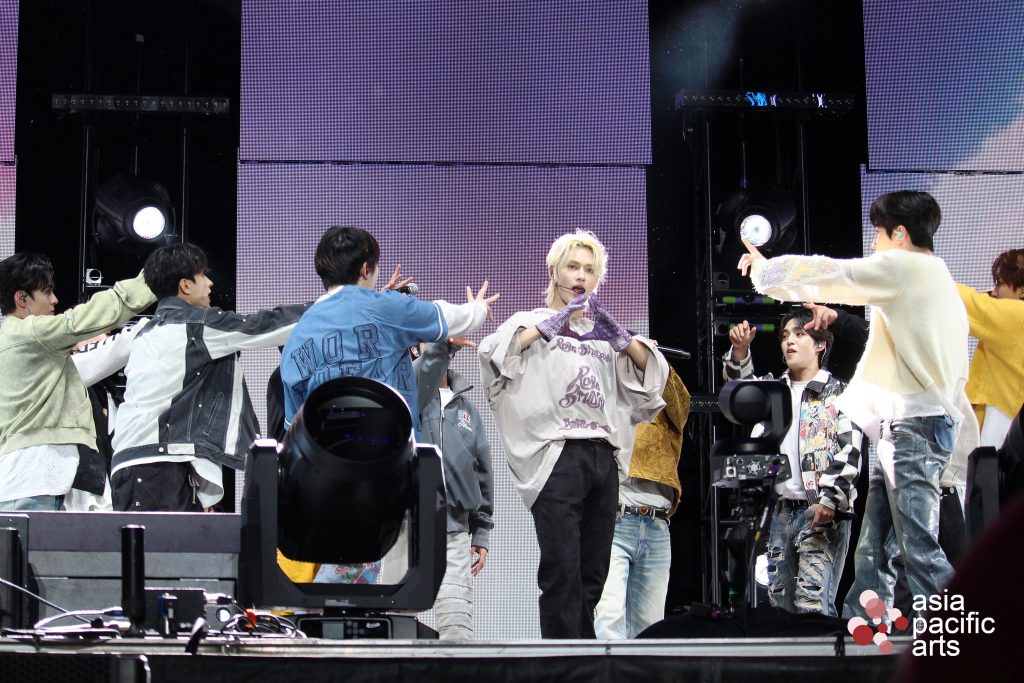 As the time neared 6 p.m., Carats only grew louder and rowdier, knowing it was almost their favorite group’s turn to perform. In true K-pop fashion, a VCR recording welcomed SEVENTEEN to the stage. Despite the fact that some attendees may not have known who they were, the group went full force and put their performance chops on display. Essentially, the 13-member group performed a condensed version of their recent Be the Sun world tour, with a special gift thrown in for Carats in the middle. The group performed title tracks, such as “Hot,” “Rock with You,” and “Left & Right,” and unit stages to show off their various styles in smaller groups. The English-speaking duo Joshua and Vernon, kicked off the unit stages with their pop punk-inspired song, “2 Minus 1,” surprising unsuspecting attendees with the sudden genre change. This led into SEVENTEEN’s performance, vocal, and hip hop team performances, giving the crowd a taste of their strong dance, vocal, and rap abilities. Teased previously in an interview with Billboard, the leaders also performed their song “CHEERS,” much to the delight of Carats. The group finished their set with their signature extended performance of “AJU NICE,” singing and dancing to the song for 15 minutes straight before exiting the stage.

SEVENTEEN was the perfect choice to introduce K-pop to attendees who knew nothing about it, as they’ve proven time and time again that their performances are a delight. Effortlessly executing difficult choreography in-sync and hitting every high and low note flawlessly, the group is proof that K-pop is more than the stereotype of overly groomed faces. With powerful stage presence and energy, SEVENTEEN is unapologetically themselves whether they’re before fans or uninitiated listeners, offering a balanced combination of playful yet serious as they went from song to song. As the group electrified the crowd with their musical versatility, no one would have guessed this was their first U.S. music festival appearance.

With this being LA3C’s first event, there’s certainly a lot of room for growth. Luckily for them, the artists in attendance were made for the stage and successfully made up for event drawbacks with their amazing performances. While LA3C was established with a meaningful intent, the event could use some work to become more cohesive and better reflect its mission. 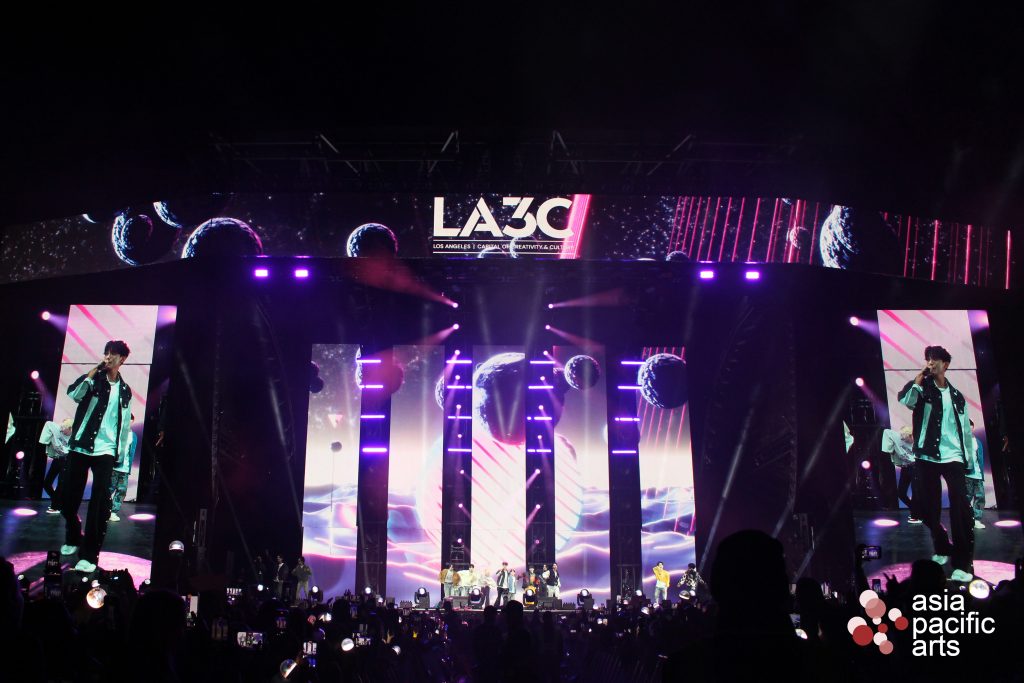