Ginger Root, an alternative soul project led by singer and multi-instrumentalist Cameron Lew, closed out their latest U.S. tour in Lew’s hometown of Orange County. Lew was joined onstage by drummer Matt Carney, bassist Dylan Hovis, and intrepid videographer David Gutel. To commemorate this special hometown concert, the show was live-streamed on Ginger Root’s Youtube channel, and the camerawork was like that of an overexcited camcorder user, darting quickly from one band member to the next and zooming in for artistic effect. The rhythmically strobing lights, spontaneous videography, and Ginger Root’s nostalgic 80s city pop sound came together to create a delightfully disorienting, immersive audiovisual experience.

The band describes its sound as “aggressive elevator soul,” a nod to the driving bass lines, heavy dose of funk, and a classic Japanese city pop feel that is bound to induce more head-bopping than socially acceptable in a crowded elevator. They performed songs from the City Slicker EP like opener “City Slicker,” “Juban District,” and “Loretta,” the latter of which Lew introduced by thanking the YouTube algorithm. The EP is meant to serve as an OST for an imaginary character “just trying to get through and trying to make do” in the Juban District, a real place in Tokyo referenced in Sailor Moon. A second Sailor Moon reference appeared during an anime medley that also featured songs from Cowboy Bebop and One Piece. 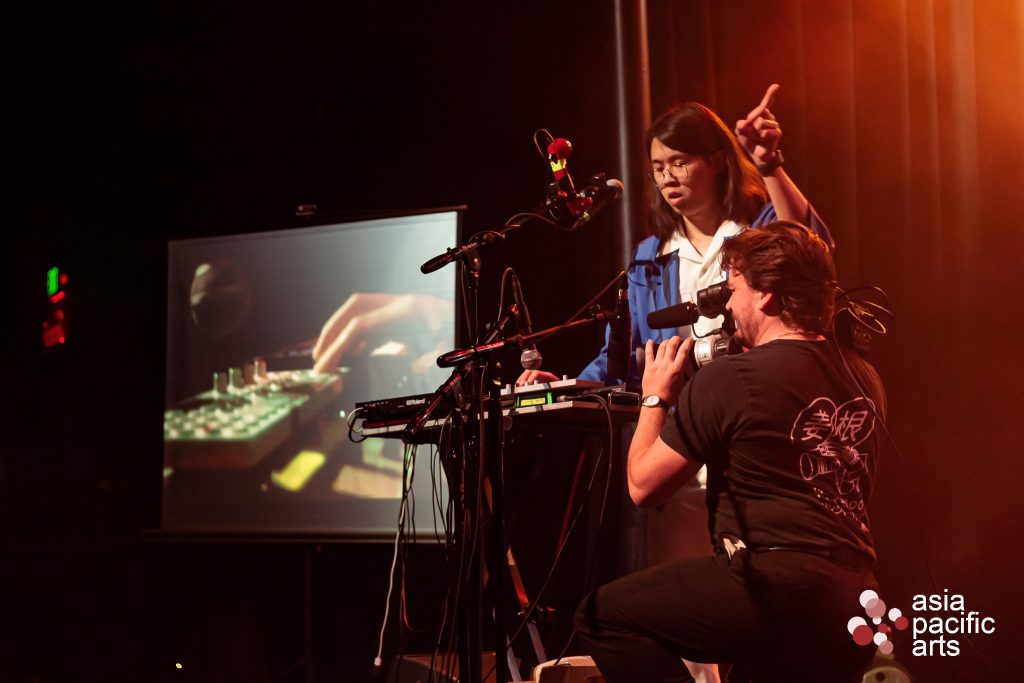 Little details of the performance–the red telephone mounted next to Lew’s mic, a sunglass-sporting dog figurine on the drumset, the 90’s home video-esque camerawork, the references to the music videos–gave the audience a window into Ginger Root’s aesthetic and cinematic world. Before the band performed “Loneliness,” the screen played the music video to explain the backstory, in which the singer that Ginger Root wrote a song for abandons the stage last minute, and the singer’s manager desperately asks Ginger Root to perform live instead. After a successful performance, he is thrust into unexpected fame, and the album Nisemono, which means “counterfeit” in Japanese, explores the insincerity and imposter syndrome that comes with this fame. As if stepping out from the music video played onscreen, the reporter from the “Loneliness” MV appeared onstage to publicize Ginger Root’s newfound fame, and the red blazer-donning manager from the same music video delivered a saxophone solo in “Loretta.” An onscreen advertisement for the “Ginger Fresh” drink served as the intro to “Holy Hell,” and after “Over the Hill,” the manager came on stage to serve Lew the drink previously advertised by Lew himself, further blurring the lines between Ginger Root’s cinematic universe and reality. 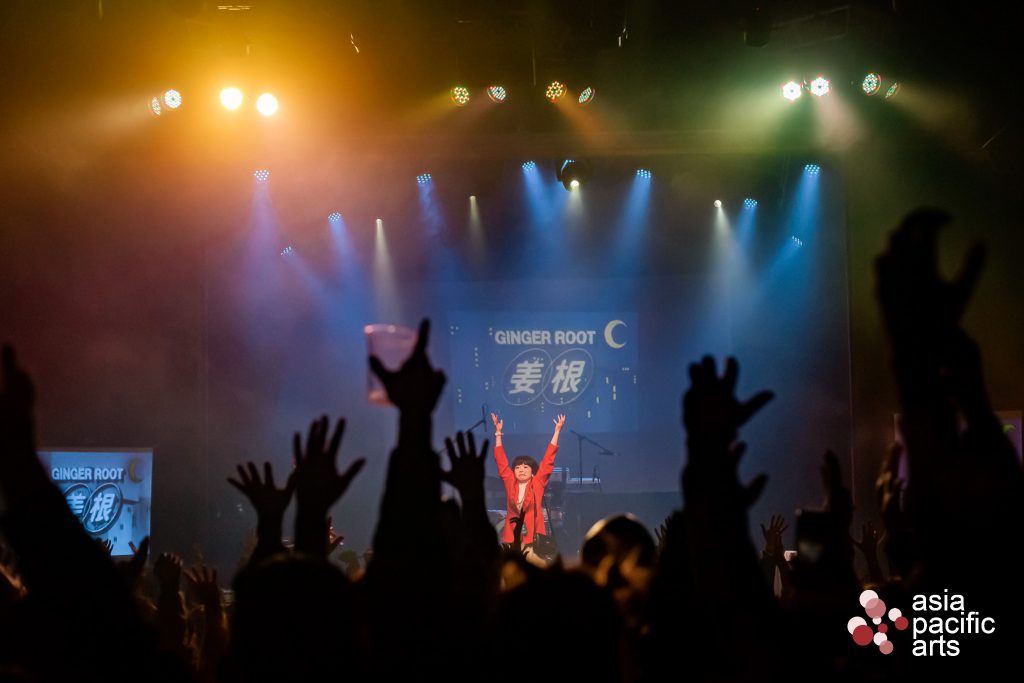 Lew’s dry humor gave the audience hearty chuckles between songs. “Do you ever go in the grocery store, and you’re walking down the bread aisle, and you look at the baguettes and you think, ‘Ah friends’? If you imagine a croissant or baguette, your enjoyment of the next song, ‘Le Château’ will increase,” Lew said with a deadpan expression, one of several borderline absurd comments of the evening. Before beginning “Fly Too,” he aptly described the experience of “reality meditation,” where you are “centering yourself and you kind of get anxious and you’re like ‘Oh my god I’m meditating.'” The keyboard solo at the beginning of “Fly Too” perfectly encapsulated the “reality meditation” Lew described, consisting of a few delicately played chords that quickly descended into frustration and dissonance. Thankfully, the rest of the song moved beyond the unsuccessful meditation attempt and embraced a laid-back, dreamy sound, interrupted only by Lew’s announcement of the mid-song key change.

Ginger Root closed out the concert with “Weather,” which features a call-and-response bit with the audience during the chorus, and two encore pieces, “Mahjong Room,” an homage to Lew’s cultural heritage and an uptempo cover of city pop staple “Dress Down” by Kaoru Akimoto. Lew expressed how surreal it felt to sell out a venue where he grew up seeing his favorite bands perform at and thanked his bandmates and concert staff before excusing himself to take a Zoom call, an apt, tongue-in-cheek ending to Ginger Root’s first tour since the pandemic.

Check out the photo below to see all our photos from the concert on Facebook! 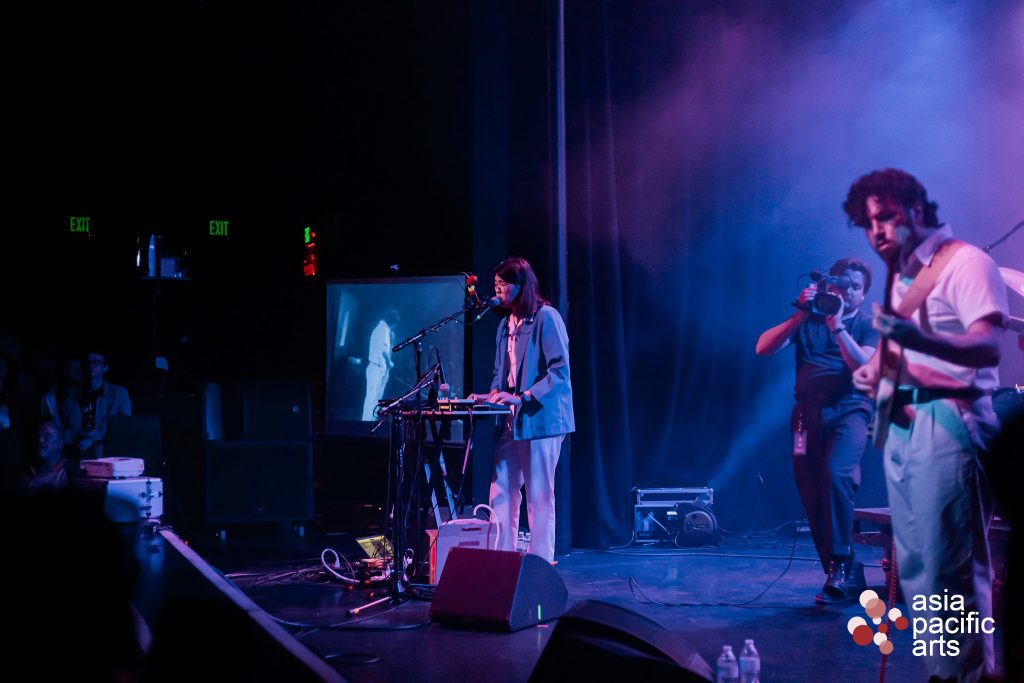