In a noisy, fast-paced world, immersing yourself in a film like Riceboy Sleeps is a welcome escape. Director, writer, and actor Anthony Shim has created a quiet, intimate drama that is so true to life that you can’t help but feel deeply for each of the characters. The film premiered at the 2022 Toronto International Film Festival and won the Platform Prize, which is attributed to films of “high artistic merit that also demonstrate a strong directorial vision.” In the few months since, Riceboy Sleeps has taken home awards at multiple festivals, including, most recently, the Flash Forward Audience Award at the Busan International Film Festival.

In just under two hours, Riceboy Sleeps perfectly captures the imperfect life of a Korean family, consisting of single mother So-Young (Choi Seung-yoon) and her son Dong-Hyun (Ethan Hwang, Dohyun Noel Hwang). In the early 90’s, after her husband’s suicide, So-Young decides to leave Korea and moves with her son to a small town in Canada. Between these two characters, there is an abundance of love and sacrifice, growth, and suffering. The themes most strongly explored in Riceboy Sleeps are the mother-son relationship and the immigrant experience, which we see from both Dong-Hyun and So-Young’s perspective.

As a young child, Dong-Hyun endures incessant bullying by ignorant classmates, and he slowly begins to detach himself from his Korean culture in order to fit in. After his peers make fun of his packed lunch, he tosses his kimbap into the trash and asks his mom to prepare him food like the other kids eat instead. His teacher, unable to pronounce his name, suggests that he adopts an English name, like David. Later, when the film jumps forward to 1999, the first we see of teenage David/Dong-Hyun is him staring into a mirror with dyed blond hair, putting in blue contacts lenses. Dong-Hyun has been molded by an environment that is unappreciative of, and even hostile to, his Korean identity, to the point that he feels the only way he can belong is to forgo it completely and assimilate. 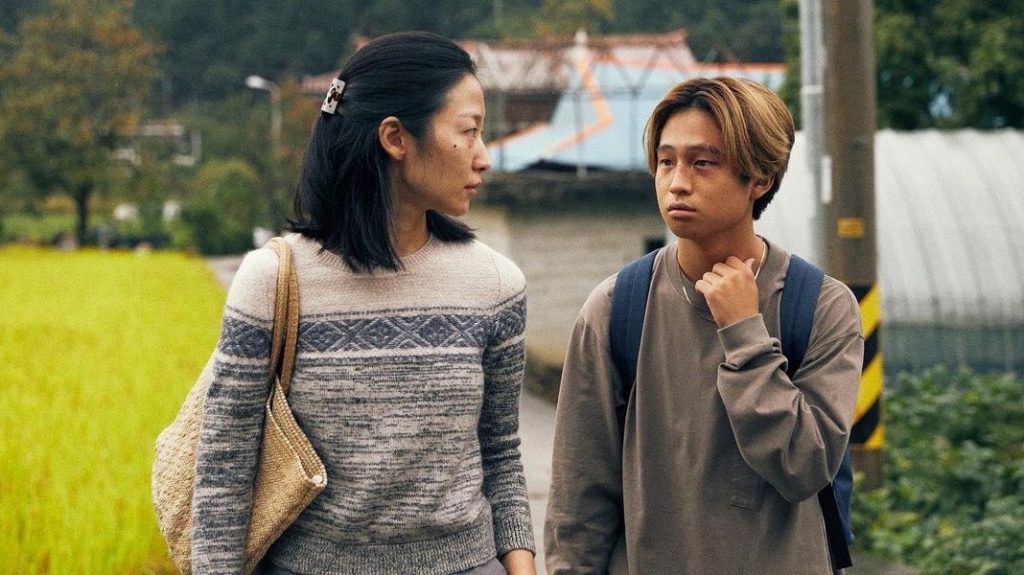 As a mother, So-Young is fiercely capable, always tirelessly giving what she can to provide for Dong-Hyun. Defying the stereotype of a submissive Asian woman, she embodies the tenacity and fortitude that a single mother and woman of color must possess to carry her head high through a white, male-dominated environment. When a male coworker gropes her casually at work, she almost brushes it off but turns back around, loudly and firmly yelling in his face to never touch her again. She raises Dong-Hyun with the same mentality. In a particularly funny and endearing scene, she instructs him that if a kid tries to bully him, he should ask “Do you know taekwondo?” and hit them as hard as he can. When this piece of advice eventually gets Dong-Hyun into trouble at school, So-Young arrives at the principal’s office, appalled not at her son’s behavior but at the fact that he was the only one being punished despite the other kids’ instigation and involvement. After telling the principal off for being racist, she storms out with Dong-Hyun and drives them back home, telling him not to cry: “If you cry or show weakness to people they will walk all over you.”

Perhaps one of the most difficult scenes to watch is when So-Young receives her cancer diagnosis. She brings in a Korean-English dictionary into the doctor’s office, expecting nothing more than some information about why she’s having back pain. When the doctor tells her she has terminal Stage 4 pancreatic cancer, So-Young doesn’t understand at first. She begins to look up the word “terminal” in the dictionary before the doctor gently but straightforwardly explains that she will die. There is something so striking about this moment, and Choi Seung-yoon pulls off this scene, as well as many others, with such subtle expressions that it feels less like an actor portraying a character and more like a real human being reacting to these moments. This sort of phenomenal, nuanced acting is also displayed by Anthony Shim, who, in addition to directing and writing the film, also plays Simon, the man So-Young is dating. In the scene where Simon learns about her cancer, we don’t see or hear So-Young tell him the news within the frame, only Simon’s body language and facial expression, somber and broken, as he takes in her words.

Along with the superb acting, much of the soft, intimate nature of Riceboy Sleeps is attributed to the beautiful cinematography work of Christopher Lew. He makes use of two different aspect ratios, starting in 4:3, which is reminiscent of an old home movie, before expanding to 16:9 for the scenes in Canada. Combined with the muted colors and grainy visuals, the film gives off a certain nostalgic undertone. Lew also uses camera cuts sparingly, with long sections of close-up scenes between two people often depicted in one shot. Sometimes, the camera will rove slowly from one speaker to another, making the viewer feel like an invisible observer in the room. Instead of rapid-fire dialogue, there are ample pauses in conversation, some almost feeling longer than necessary, inviting the viewer to take in the moment alongside the characters on-screen. At the heart of this drama, and what the film closes in on at the end, is the often complicated relationship between mother and son. In one scene with Simon, So-Young relates a Korean folktale about “goryeojang,” the practice of abandoning elders in the mountains to die when resources were scarce. Ultimately, the story is about sacrifice and unconditional love, with the old woman continuing to provide for her son until the very end, even as she knew he was bringing her closer to her death. So-Young’s relationship with Dong-Hyun had always been strained by the fact that she avoided talking to him about his father and his suicide. In the final act of the film, So-Young finally bridges the valley between herself and her son by taking Dong-Hyun back to Korea to meet his paternal grandparents and uncle. In the green mountains of Korea, the mother and son begin to mend their relationship, and Dong-Hyun also starts to open up to his Korean roots. In a particularly symbolic scene, he goes to a spa with his uncle and gets a haircut, buzzing off his blond hair. He loses his contacts in the jacuzzi and returns to wearing glasses, becoming nearly unrecognizable from his former self. In a reversal of the previous scene, Dong-Hyun/David is transformed again, both inside and out.