Ukulele virtuoso Taimane Gardner has carved out a unique, bold sound for herself that draws from styles as disparate as metal, classical, jazz, and flamenco. On a chilly Tuesday evening in late October, she put on an unforgettable show with five other performers at the Smothers Theatre in Malibu during one of the last stops of her Hawaiki world tour.

Dressed in a flowy emerald dress and a crimson flower hairpiece, Taimane welcomed the audience with a friendly “Aloha” and placed a white lei over her microphone, a tangible reminder of her Hawaiian roots. On both sides of the stage, she is flanked by Ramiro Marziani on classical guitar and Stefie Dominguez on percussion, and the trio opened with a dramatic “Led Zeppelin Meets ” Beethoven” mashup. The intensity–along with the strumming speed–escalated at an almost unbelievable pace until the accompaniment parts pulled back briefly for the “Stairway to Heaven” opening motif to linger in the thick silence. As Taimane gracefully moved around the stage, her fingers danced furiously across the ukulele strings, drawing out sounds one would not think were possible from the small instrument. The brief pauses in the middle of songs were perfectly timed to build suspense before the performers swept the listener back into the relentless, groovy ride.

Violinist Baethoven joined the trio onstage for a melancholy, but no less dramatic, medley of iconic themes from “The Godfather” and “Narcos.” The arrangement was perfectly suited for the instrumentation: the electric violin solo drew out the heart-wrenching emotion of “The Godfather” theme, and the soft shaker lended a tinge of Bossa Nova to the “Narcos” theme. Other mashups on the setlist included “Carmen / Toccata / Phantom of the Opera” and Taimane’s signature medley, the “Beethoven, System of a Down, Led Zeppelin & ACDC” medley, both of which creatively weaved multiple genres into riveting performances.

The concert also showcased several songs from, Taimane’s latest album, Hawaiki, a project inspired by a recent trip to Samoa and celebrates the Polynesian side of her identity. The next song, “Bora Bora Sunset”, is Taimane’s favorite song on the album, and she guided the audience to imagine sipping wine on a relaxing, tropical getaway when listening to the song. Dancers Sky Fung and Norm Munoz joined the musicians with a Polynesian dance routine, helping to create an audiovisual recreation of a picturesque seaside paradise.

The next two songs, “Ladybird” and “Fire”, allowed the musicians to, in Taimane’s words, “let their hair down” and show off their skills individually, and it was quite a treat to see the musicians interact and let one another shine. Before long, the audience was clapping along and cheering for each soloist, feeding off of the pure joy that the musicians exuded onstage. “Ladybird” hearkened back to “Seven Nation Army”, venturing into a grungier, rock sound while also bringing in fun, blues-inspired licks, and “Fire” channeled that unapologetic attitude into a red-hot, flamenco-esque sound.

After toning the energy down for a cover of “Wicked Game” by Chris Isaak and “Afterparty,” the latter of which was inspired by a tune Taimane heard in a dream, she introduced attendees to her two ukuleles. The instrument she has been using for the evening is named “Tigerlily” for her beautiful stripes, and her “younger gothic emo sister” ukulele is named Kaa, after the snake in The Jungle Book, for her darker physical and tonal color. Taimane performed her final song with Kaa, whose moodier timbre suited the stormy atmosphere of the piece. “Neptune’s Storm” is arguably one of, if not the most, compelling songs of the evening. It opened with a solemn conch shell horn solo and segued into an atmospheric, mystical musical depiction of the turbulent gas giant, an image further reinforced by Sky’s deliberate routine portraying a wanderer exploring amidst a storm. The immediate aesthetic and sonic immersion of the performance was nothing short of an incredible artistic feat.

Taimane performed with the audacity of a metalhead, the grace of a Flamenco dancer, and the precision of a classical artist, and true to her name, which translates to “diamond” in Samoan, she shone brightly on stage, no special effects needed. While undoubtedly an incredibly versatile musician, she is first and foremost a performer, and every aspect of her concert, from the selected performers to the well-balanced setlist, was designed to ensure an evening that was spellbinding from the very first note to the very last. 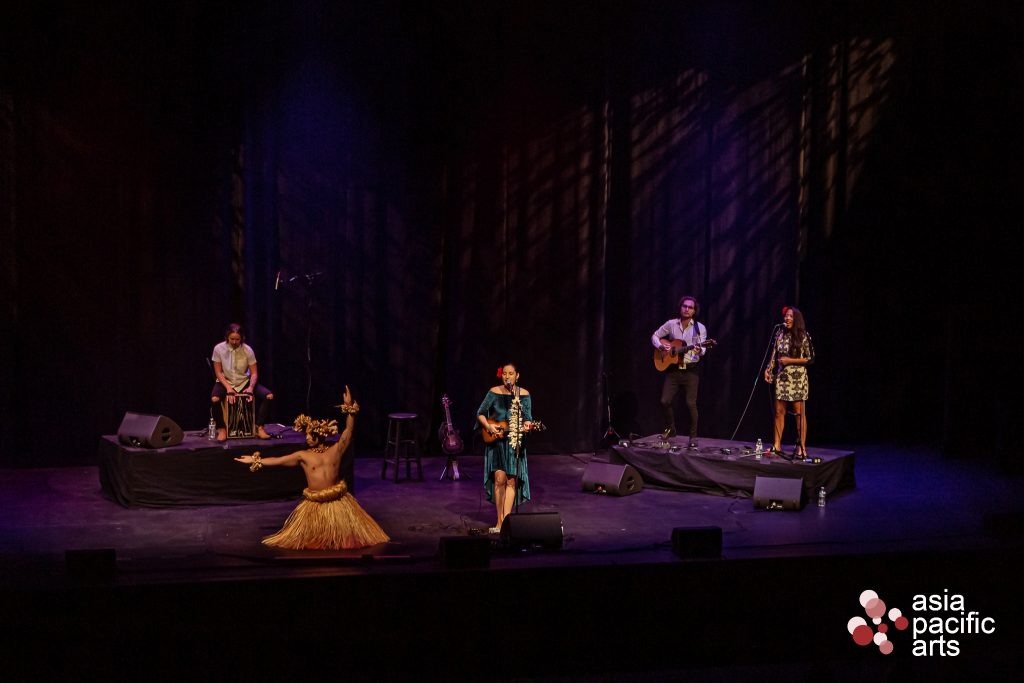