For the final stop on the U.S. leg of the Nicole tour, NIKI performed at The Wiltern in Los Angeles on a chilly October evening to entertain her loyal fans. The sold-out show had the attendee line wrap all the way around the building, clearly showing the crowd’s high anticipation.

With so much of NIKI’s music relaying her experiences growing up in Indonesia and moving to the U.S., to then working to make it in the music industry as a woman of color, it was important to NIKI to highlight other women of color at her show. One of the night’s opening acts was Paravi, an Indian American singer-songwriter whose popularity skyrocketed on TikTok during the pandemic. Paravi’s set introduced unreleased songs such as “Shake the Feeling,” telling her story of being caught between the Indian and American versions of herself before realizing that this particular in-between feeling encompasses an entire community itself. Another of her songs spoke about body shaming, and needing to unlearn the hate young women have grown to have for their bodies. Her deep, rich voice and meaningful lyrics were the perfect introduction to NIKI’s equally beautiful but much lighter, brighter voice.

Right before her set, the venue played Taylor Swift’s “All Too Well,” which has a lot of meaning to NIKI. Well-known for being a fan of the singer, NIKI got her big start opening for Taylor’s concert in Jakarta as a teenager. Soon after, the house lights dimmed once again, and the sound of a guitar and drums could be heard as the beginning notes of “Keeping Tabs” welcomed NIKI. Running on stage with a huge smile on her face, NIKI was dressed in an all black outfit, with her hair tied back. Although no stranger to fancier outfits, such as her previous Head in the Clouds performance which featured three outfit changes, the decision to wear such a simple piece was very fitting for the Nicole tour. With the album representing the singer’s acceptance of her past self and bringing things back to the basics, the simple outfit also helped everyone focus on her music, rather than any additional effects. Recalling her start as just a girl with her guitar, her performances for the night were paired with live instruments from her all-girl tour band, and NIKI herself rotated between playing two guitars and a piano to accompany her singing. The stage set up was also quite plain (in a good way), with NIKI front and center, her band behind her, a screen playing behind the scenes clips while she sang, and a few small lights to create a fairy light effect occasionally lighting up. 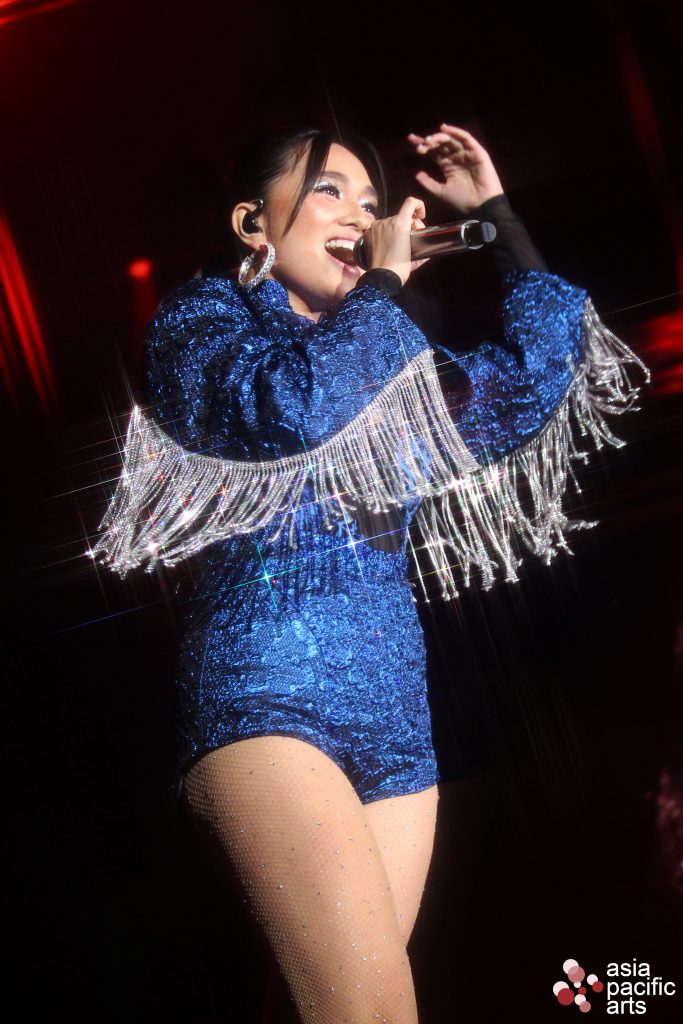 Singing some of her biggest hits, NIKI powered through songs like “Lowkey,” “Vintage,” and “Urs” before picking up her first guitar for the night to strum along as she sang “Backburner,” her “not-so-secret favorite song off her album.” Sharing small tidbits of information before many of her songs, the nostalgia was clear on NIKI’s face and in her voice as she introduced songs she wrote as a teenager. “I wrote [Anaheim] at 17 years old in Jakarta, and I’m playing it at 23 at a sold out show in Los Angeles,” she gushed, while strumming the strings on her guitar. NIKI showed off her skills on various instruments, not just sticking to singing or playing guitar, bringing a piano along for “The Apartment We Won’t Share,” “Around,” and “Lose.” Calling it her “little piano moment,” the piano playing on stage paired well with the spacious venue, echoing all around and creating a haunting, sentimental atmosphere, especially with somber songs like “Lose.”

Despite not interacting with her audience in the form of taking phones for selfies or signing autographs on stage, NIKI still kept the audience involved. At one point during her set, she asked fans what songs they’d like to hear from her. Following this, she performed “Split,” a song she wrote about not feeling like she has a home anywhere as she spends part of her life in Indonesia, and part of it in the U.S. Nothing else seemed more fitting for this “hometown show,” and the audience agreed as they sang along to the emotional song. Feeding off of this high, the singer-songwriter asked for a second song from the audience, and began to sing “I Like U,” an older song that still had the audience screaming the lyrics along. Reaching the end of her set, NIKI introduced the second to last song before the encore as the “saddest song of the set,” before requesting for fans to hold up their phone flashlights. Her fingers gently began to strum the strings on her guitar yet again for “Oceans & Engines.” Everyone’s eyes naturally closed as they held their phone lights up, swaying side to side and singing along.

Everything from the outfits, stage setting, and even the venue itself all contributed to the evening being the perfect closing show to the tour. The Wiltern is a historic venue located in the heart of Koreatown and was always a dream for NIKI. Sharing a fun fact with the audience, she mentioned that the first place she lived when she moved to LA was actually just down the street from the venue. “I would walk by The Wiltern every morning and see a different name on the marquee, and just think, ‘Wow, that’s so sick!’ You guys have no idea how much it means to me that the last show is here, and you guys even sold it out,” she shared. “It’s the very last show of the tour. It took a minute, but Los Angeles is really starting to feel like home to me, so it’s really special to be able to end the tour here.”

The concert wrapped up with “High School in Jakarta,” and NIKI was beckoned back on stage for an encore performance of “Indigo” and “Every Summertime.” Although there weren’t any stage effects or special lighting effects to pair with the show, the concert was still incredibly memorable for both artist and audience. In a true ode to the phrase “simple is best,” NIKI instead enchanted her fans with her voice, her lyrics, and her music. Spending the night singing with those who’ve supported and waited for her, NIKI closed out her Nicole tour with many memories to hold onto until she meets her fans again.