Starting off their U.S. tour strong, ENHYPEN performed two nights at Anaheim’s Honda Center, a venue previously filled by some of the biggest musical acts. With the first night in Anaheim being the start of their Manifesto tour, the group wasn’t sure what to expect, but Engenes certainly made it a night to remember for both themselves, and ENHYPEN as well.

At the start of October, K-pop boy group ENHYPEN kicked off the U.S. leg of their first world tour with a two-night show at Anaheim’s Honda Center. Prior to the band’s entrance on stage, fans were already getting into the mood for the show, shouting fanchants along with the music videos playing on each large screen in the venue. Outside the venue was a booth to help fans set up their lightsticks, enabling bluetooth to create a sea of synchronized color-changing lights during the concert.

As the house lights dimmed to signal the start of the show, the first video of the night featured each of the ENHYPEN members lighting candles on a cake while a lunar eclipse lit up the sky. This set the tone for the remainder of the videos and concert, which took attendees through an eerie journey with dark elements that ultimately leads to the light. Once the video ended, the stage lights came on to illuminate the group behind a thin screen on stage, ready to dive into the first song, “Given-Taken.” Just like in the video, the band donned royal white outfits trimmed with gold. The first performance ended with an explosion of gold glitter confetti, shimmering in the air, as the group went on to perform “Flicker.” After quick introductions offering their names and sharing their excitement and anticipation, all in English, ENHYPEN quickly launched into more performances. Switching between cute songs like “Not For Sale” to sultry tracks like “Let Me In,” the setlist kept everyone on their toes, anticipating what could come next. 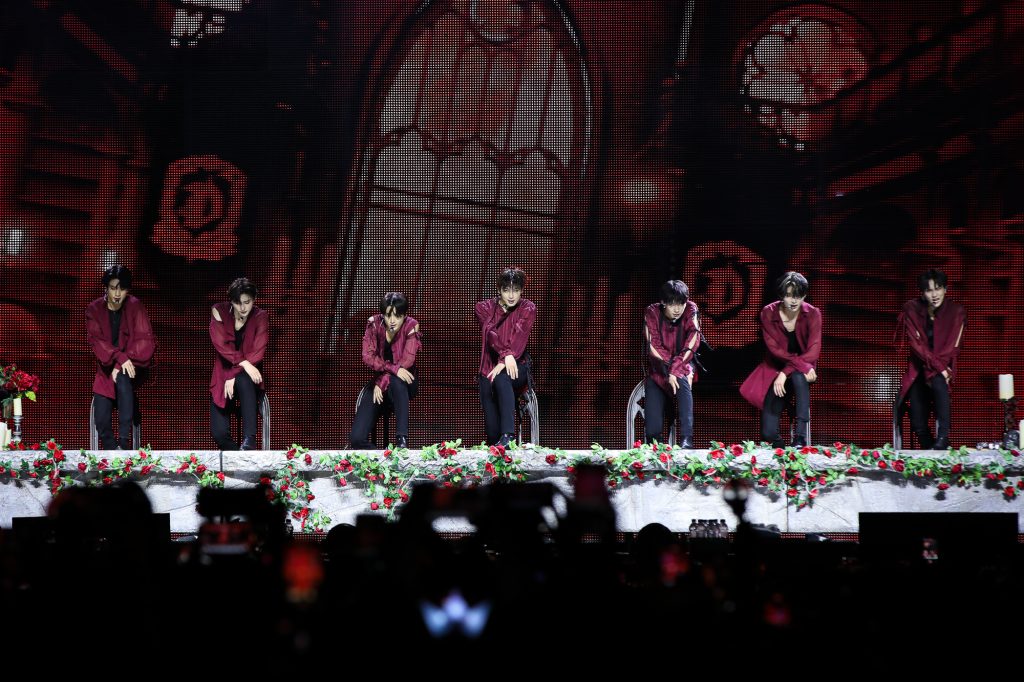 The second video was a sudden switch from a calming blue to an alarming red, indicating the change in mood, as the group returned to the stage in dark red blouses to perform “Drunk-Dazed.” A dining table similar to the one in the video lined with roses and vines was brought on stage for “One in a Billion,” and the group prepared a special dance break before performing one of their most popular songs, “Fever.”

A unique effect on the onscreen stage featured graffiti that was “wiped off” bit by bit to reveal each member of the group. Making a 180, ENHYPEN appeared in sparkling school uniforms to match the brighter sound of “Attention, Please!” During the performance, the group gave fans, known as Engenes, a surprise gift, launching signed balls into the audience. For their TikTok viral song, “Polaroid Love,” the members strolled through the audience to get a little close and personal. Although the lack of an extended stage put some distance between the group and the crowd, ENHYPEN’s performance and energy bridged that distance, reaching fans throughout the venue. 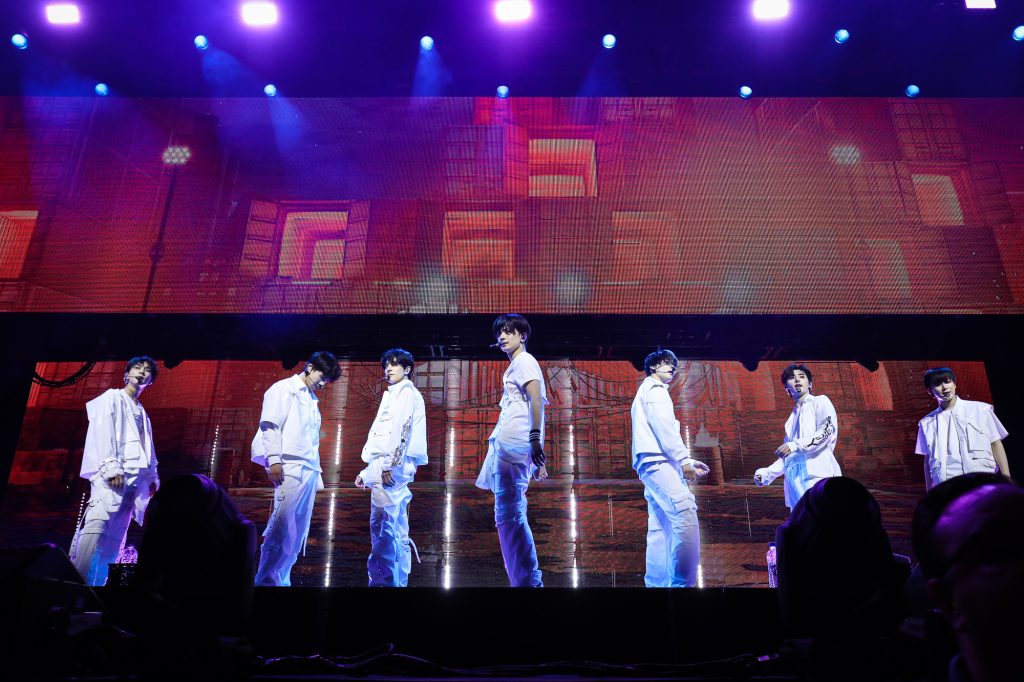 Winding down toward the end of the night, the third video similarly changed tones, but this time, from red to green. Approaching a red door with leader Jungwon in the front, the door opened to a green glow, and the members were back on stage, dressed in street fashion. The all-white outfits glowed on stage as the group blew through high-energy tracks, “Blessed-Cursed” and “Go Big or Go Home,” against streamers and bright color lights. Niki mentioned how much more fun it was to perform these songs with Engenes, and the group expressed their sincere gratitude to their fans during their final moments together. The group finished sharing their thoughts and promised to go through their last song while giving their all, and they performed “Future Perfect (Pass the MIC)” before exiting the stage.

Amid loud chants of “ENHYPEN,” the lights dimmed again as another video came on showing the members walking towards a bright light. This was timed with the members appearing on stage in their tour merchandise to perform “ParadoXXX Invasion” and “SHOUT OUT,” greeting their Engenes one last time for the evening. Not wanting to leave, the group even performed “SHOUT OUT” a second time, as members Heesung and Jungwon held back tears. Closing the show with promises to come back and messages of thanks, Heesung wrapped things up with one last thank you. “This is all because of you guys.” 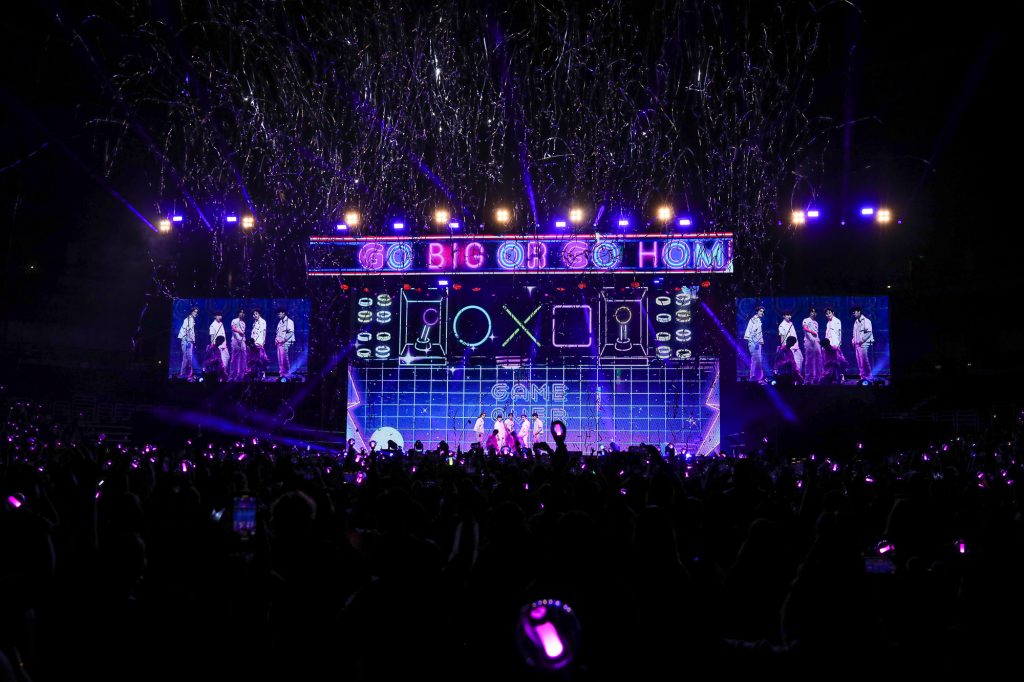 While the synchronized dancing, strong rap, and effortless high notes made for a good show, what truly made the evening great was seeing ENHYPEN grow more confident and comfortable on stage as the night went on. At the start of the show, each member’s greeting was timid, but after hearing the cheers of their fans who had waited so long to see them, the group grew more playful, joking around with one another and Engenes. They talked about the storyline from the videos and how they prepared them wanting to create a theme for the show, and overall letting loose to have fun on stage. Admitting to the crowd how exhausted they were after performing a packed setlist, they reassured everyone that they wouldn’t give in so easily because the energy and love from fans was enough to keep them going. The group’s honesty and passion created an unforgettable experience for Engenes who were ecstatic to see the full group together for the first time in the US. Sunoo, who did not attend KCON with the rest of the group earlier this year, was welcomed with deafening screams that prevented him from even being able to speak, and the sound of the audience was only slightly less loud for other members, shocking Sunghoon out of a daze, unable to speak through his laughter.

The members carried a subtle innocence to them, as if everything was new to them, reveling in the way Engenes sang, danced, chanted, and cheered throughout the show. Performing with the stage presence of a well-seasoned idol group, but with the gentle and appreciative approach of a rookie group, ENHYPEN presented the perfect balance. Although fans were the ones who bought tickets to see the group, the curious and excited glint in the members’ eyes as they looked into the crowd could convince anyone they were the ones seeing their idols.