Kicking off Labor Day weekend, Anime Impulse returned for a second time this year, but in a new location. Anime Impulse typically takes place around Martin Luther King Jr. Day and is part of the Asian American Expo held at the Pomona Fairplex. Given the popularity and demand for anime conventions earlier in the year, the organizers decided to host a part two to Anime Impulse. This time they featured a bigger list of guests for fan meetups and autograph signings. Initially, Impulse gained attention when they announced Nijisanji EN Vtuber group, Luxiem, as their first guests for the September event.

Unlike larger, industry conventions, Impulse boasts an affordable ticket price at $15 a day. This includes access to various events including Anime Impulse, Sneaker Expo, K-PLAY! FEST, and a mini version of Asian American Expo. Held in January, Asian American Expo hosts various Asian food and product distributors, and most of its attendees skew older. Their audience are mainly families who come to buy packaged snacks and goods for low warehouse prices. While Anime Impulse is a smaller part of the Asian American Expo event in the MLK Day version, the Labor Day event put anime front and center. Impulse attracted a younger crowd—filled with cosplayers and K-pop enthusiasts—in one place at the OC Fair & Events Center. Each event was held in a single area comprised of five separate exhibition halls. These halls acted as individually themed shopping centers with a plethora of food vendors in the parking area next to the itasha, cars decorated with anime images. 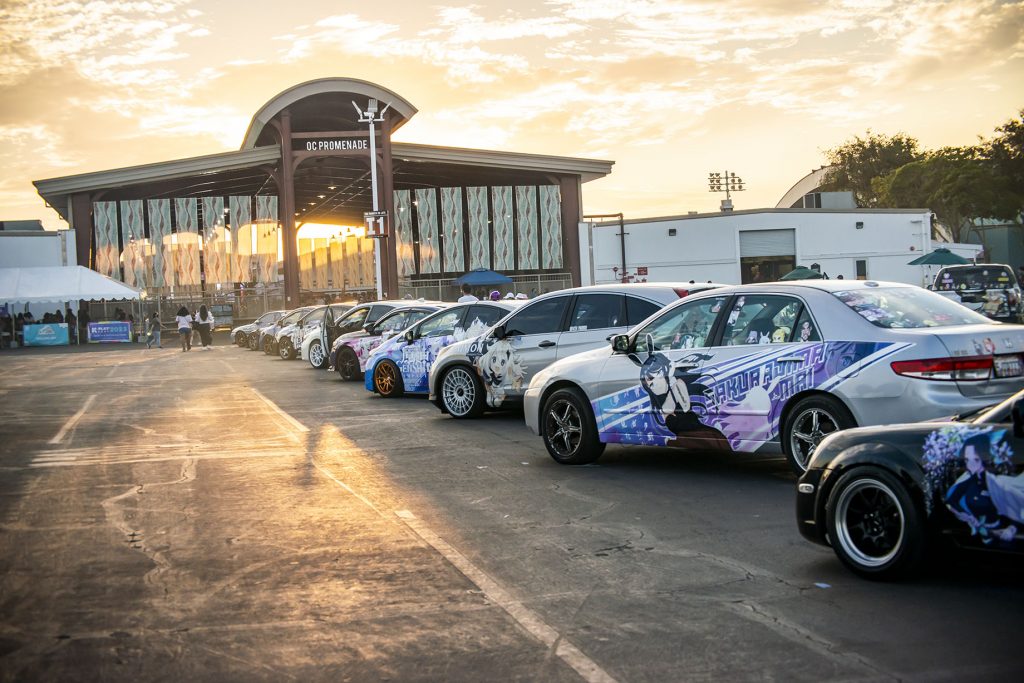 Both the Winter and Summer versions of Anime Impulse are part of a growing trend of swap-meet gatherings with a low ticket cost for entry. Unlike the more expensive industry conventions, the local convention location allows for more attendees to gain direct access to store fronts and artist alleys. On the other hand, Impulse lacks all day panel programming compared to big conventions like Anime Expo or Crunchyroll Expo. Outside of the event’s main attraction, the average attendee’s day consists of fan meetups, shopping, and eating. At the same time, the inclusion of voice actor signings, live stage performances, and Luxiem’s panel were more than enough to convince fans from far and wide to come and experience what Impulse had to offer. 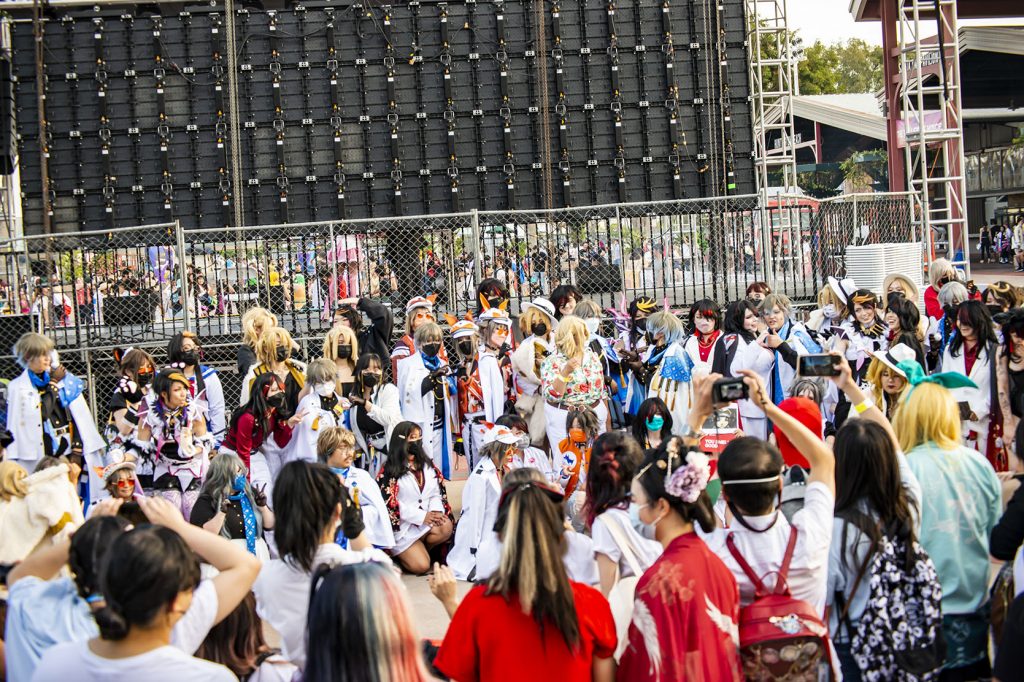 In partnership with Nijisanji, Anime Impulse held “Showtime with Luxiem,” which included a live panel, fan meet and greets, merchandise, themed drinks, and a photo opportunity with standees of the members. This event marked Luxiem’s first convention in Los Angeles, and their second in the US. Before Impulse, they held a live panel at Dallas’ Anime Fest in August. Personally, I was curious as to how Anime Impulse would host a physical event for this group of popular virtual streamers. Closing the digital gap by providing a physical event to meet a virtual person doesn’t sound appealing on paper. However, it’s arguably the smartest business idea that adds flavor to the fan and streamer interaction.

Meet and greet pictures with luxiem!! I was so nervous;; it was such an honor meeting you all!! Hopefully next time I won't be so awkward;; #MystaRias #IkeEveland #lucakaneshiro #ShuYamino pic.twitter.com/NNlCEZ1TZS

Prior to the event, Impulse sold one minute one-on-one meet and greet tickets with each member at $75 each. If you wanted a minute with each streamer, you would’ve paid a total of $375. Minutes could not be stacked and only one person could go into the booth at one time. Despite the price, this is a steal compared to the cost of a Super Chat as it includes the ability to experience a private moment with the streamer. Inside the booth, fans had the opportunity to speak directly with a member of Luxiem, be seen by them through a camera, and take a selfie with the large screen projecting their model. For those who couldn’t purchase a ticket or any official merchandise, Impulse had Luxiem-themed drinks to quench the thirst from a humid September heatwave.

In addition to purchasing meet and greet tickets, fans could also purchase a ticket for Luxiem’s Q&A panel at $25. The ticket would guarantee a front and center seat to the live panel with a random chance to ask one question to the entire group. Held at the center of the fairground, the stage was brightly lit with the five members side by side. Ike Eveland warned that he’d look like a “PowerPoint presentation” due to unforeseen technical difficulties, but his sound worked perfectly. Arguably, the most exciting portion of the panel was voice actor Keith Silverstein’s surprise appearance at the panel. The five members looked at him in awe, mouth agape, as Silverstein recited his lines as Zhongli from Genshin Impact. Without missing a beat, Vox Akuma responded to him as the crowd roared in the background. Originally, Silverstein announced he would be attending Anime Impulse as a guest for autograph signings, but his appearance at the panel was kept as a surprise from Luxiem.

All in all, the direct fan interaction between Luxiem and a live outdoor audience was an unreproducible memory. Similar to Crunchyroll Expo hosting the Hololive experience in August, anime conventions are looking to expand their relevancy in the virtual YouTuber and streamer space. It’s unclear if Anime Impulse will continue to be a bi-annual event, but it will be returning on January 14-15, 2023. Luxiem has not announced any other upcoming conventions, but Anime Impulse showed fans what is possible. 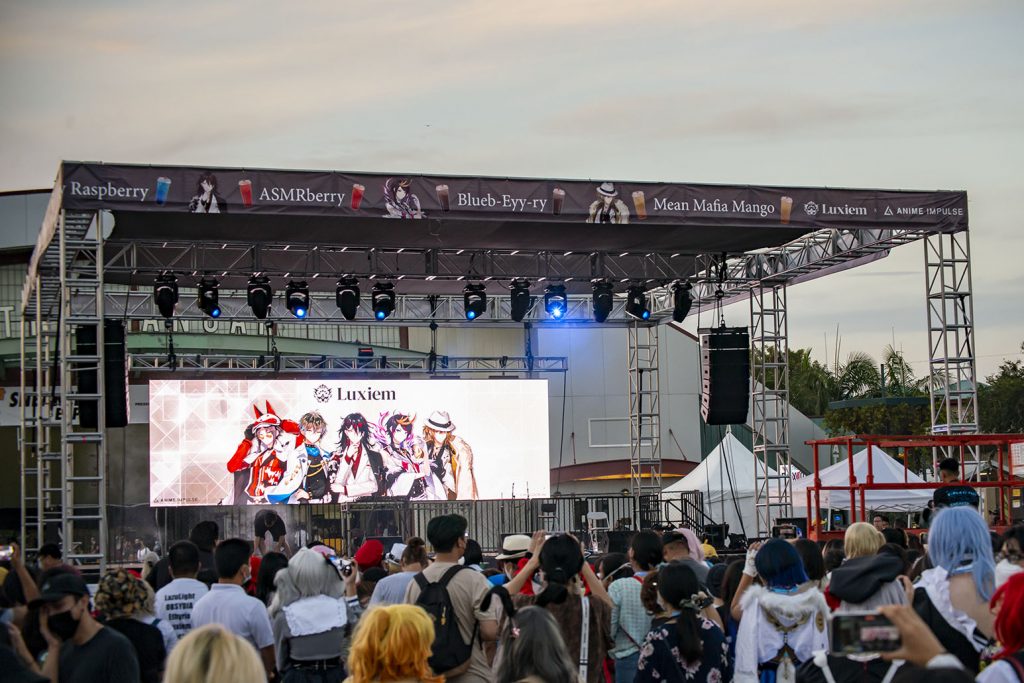