On the first evening of September, a line of concertgoers waited eagerly outside Frost Amphitheater at Stanford University. The show had been delayed by about an hour, and the crowd was getting antsy as they heard the rumbles of soundcheck finishing up within the outdoor venue. When the gates finally opened, people flooded inside, running up as close to the stage as possible to claim first dibs on a prime viewing spot. Frost Amphitheater, which holds upwards of 6,000 people at standing room capacity, was sold out for the night, filled with excited fans of the musical artist Joji. His popularity in the Bay Area had actually led to an additional second show at Bill Graham Civic Auditorium in San Francisco the next day, which sold out to an additional 8,500 attendees.

A 29-year-old singer-songwriter, Joji is known for his lo-fi R&B music, often grouped into the “sad boi” genre with his down-tempo beats and melancholic lyrics. As demonstrated by the attendance at Stanford, his audience consists of many young adults, some who probably grew up watching him back when he created comedic sketches and songs on Youtube. This stop was the first of many on his latest tour, SMITHEREENS, which will continue through the end of October. Accompanying him on portions of the tour are openers SavageRealm, a rapper and hip-hop artist from Houston, and Rei Brown, an R&B artist who has collaborated with Joji in the past. 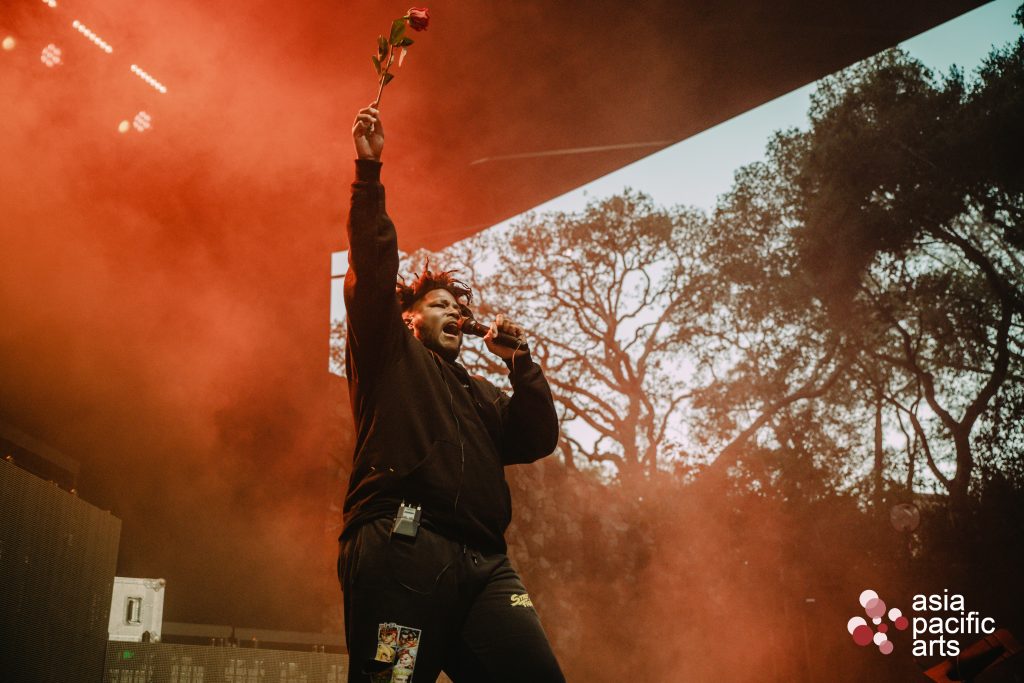 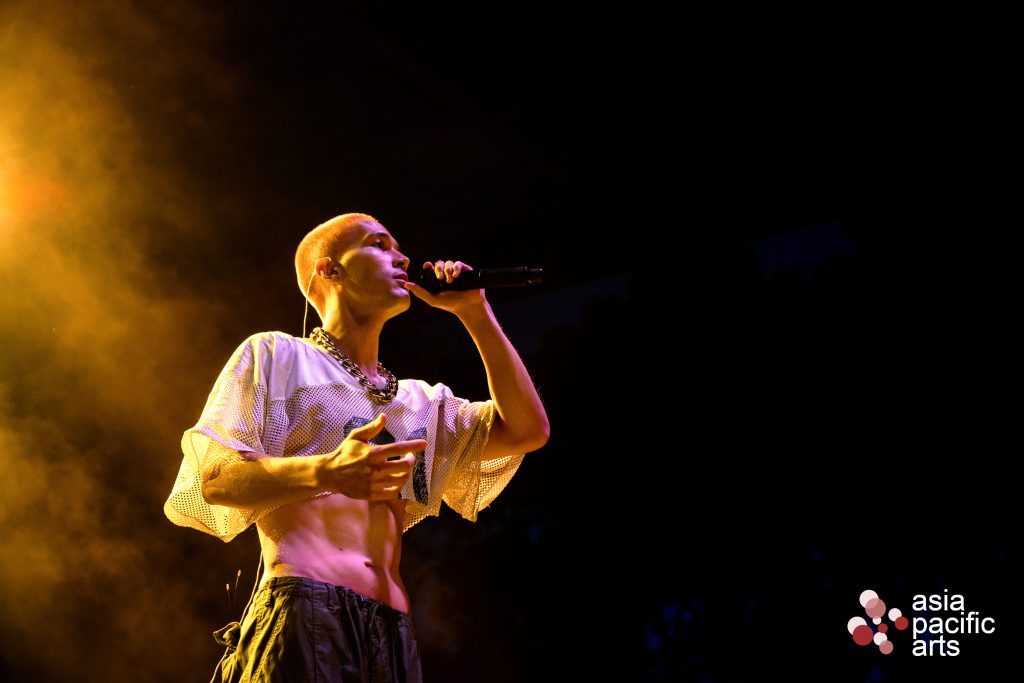 After a quick intermission, Rei Brown was next up to the stage. Dressed in a cropped t-shirt that revealed his abs, he received hoots and hollers of compliments from the crowd, with one audience member yelling “SLAY BROWN,” a wordplay on his name. Rei ushered in a mellow mood with his performance of songs like “Thinking About You,” one of the tracks he worked on with Joji. Rei’s latest album Xeno was just released this summer, marking this night as the first live performances of songs including “Neptune” and “Solar.” With a wide smile, Rei remarked that this was the biggest venue he’s performed at so far. For his final song, he sang “Forever,” a song he co-wrote with Joji and Keshi, who he also opened for recently during a tour.

When the main act of the night finally appeared, resounding cheers rippled across the crowd. Appearing on a tall platform on stage, Joji started his set with “Sanctuary” from his 2020 album Nectar, with fans singing along to every word of the chorus. Joining him on the platform was SavageRealm, who occasionally made use of a soundboard to punctuate Joji’s jokes and songs with sound effects. Bantering with his buddy on stage, Joji introduced some of his songs with a punny question that included the title of that song: “How about we give them some ATTENTION?” His set also included the live debut of “YUKON (INTERLUDE),” a just-released single with his signature piano instrumentals, a fast-paced drumbeat, and layered vocals. 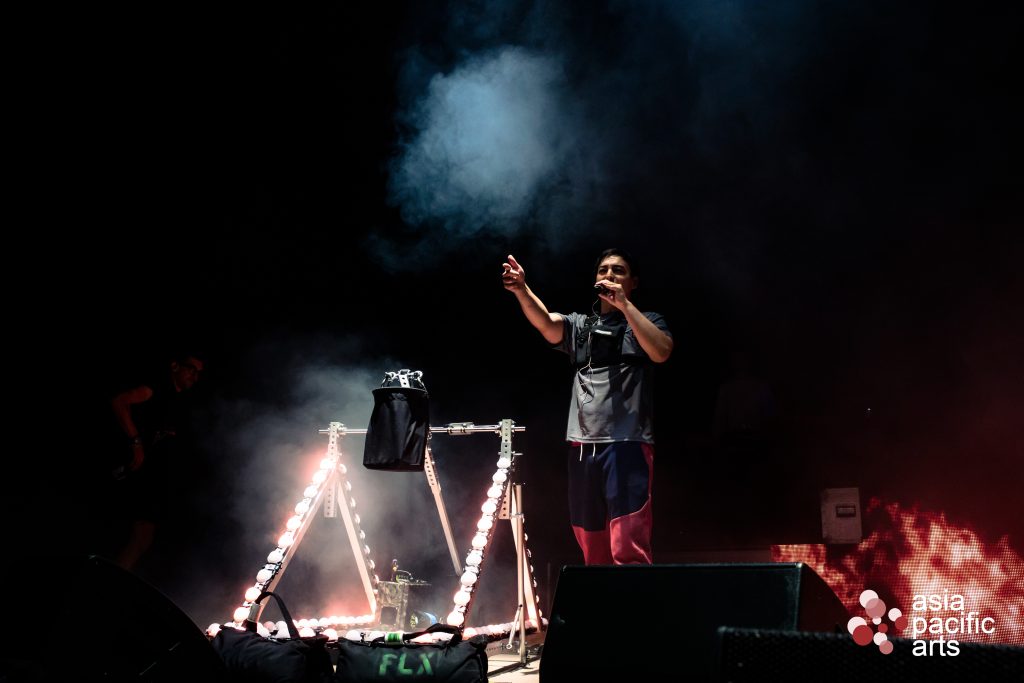 In between songs, Joji took the opportunity to introduce as much fun as possible, bringing out the wackier side of his personality. He brought out a trebuchet and bazooka to launch t-shirts into the crowd and later on invited a Jack Sparrow impersonator onto the stage who he had randomly met. SavageRealm and Joji also hosted an impromptu rock-paper-scissors contest between two audience members, getting everyone else to cheer on the participants. At one point, Joji’s band members started freestyling on the guitar and piano, with Joji joining in before they jokingly stopped him.

Overall Joji’s performances were a blast to watch, whether you were up at the very front or back in the grassy areas, taking in the ever-changing lights and trippy, abstract visuals from a wider field of view. From the high energy of the chorus in “Gimme Love” to the calming vibes of “Slow Dancing in the Dark,” Joji kept his audience enraptured throughout the night. He showed off his musical chops by performing two versions of the latter song, starting with a slower acoustic rendition, followed by the regular recorded version, to which he danced around the stage with the mic stand. Finally, with so many enthusiastic fans in attendance, the night could not end without an encore. Joji re-appeared to perform “Glimpse of Us” live for the first time. His fans sang alongside his soulful vocals, and the night air was lifted by hundreds of voices echoing in synchronicity.

Click on the photo below to see all our photos from Joji’s concert in Palo Alto on Facebook! 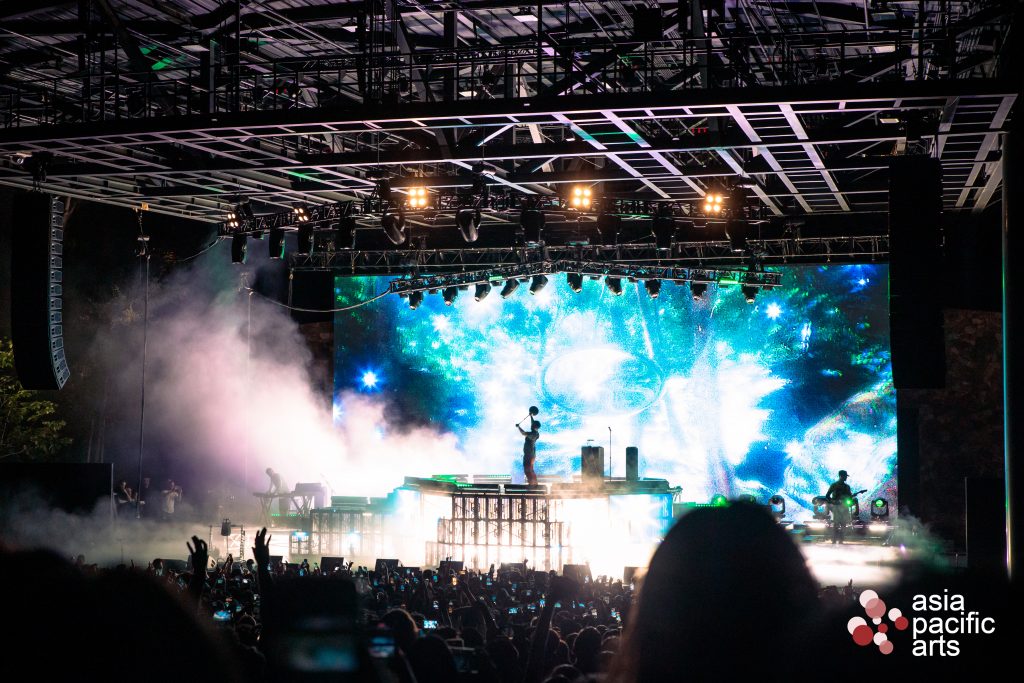