With the influx of K-pop concerts in Los Angeles, there’s never a shortage of idol groups performing their upbeat tracks with eye-catching choreography. On the first weekend of September, however, Korean music fans were given a change of pace, as K-R&B singer JUNNY kicked off his first U.S. tour at the live music venue, 1720.

Before the main star of the night stepped on stage, opening acts Justin Park and DJ Minjeong set the tone by hyping up the crowd. Justin Park brought out special guest Zane Taylor to perform their new song, “Sunset Years,” and Minjeong pumped up the crowd with remixes of popular Western and K-pop songs such as aespa’s “Next Level.” With the show already scheduled for a short two hours, the opening acts surprisingly took up a full hour, leaving only one hour for JUNNY to spend on stage with his fans.

Luckily, the time arrived quicker than expected, and JUNNY ran on stage to open the night with “Color Me.” Following the release of his latest album, blanc, the singer performed several songs off the album, including title song “Not About You,” “Mugshot,” and “Obvious.” New music aside, the artist also checked in with the audience to see how long everyone had been a fan of his. With a wide variety of older and newer fans, JUNNY also threw things back with performances of older songs such as 2019 single “Distance” and 2020 release “By My Side,” the latter of which had the audience turning on their phone flashlights to wave in the air as they sang along. JUNNY grooved from stage left to stage right, greeting fans constantly and singing his heart out. “I’m so happy right now,” he exclaimed, as he couldn’t contain his excitement about performing his own show here in LA.

Not only was JUNNY able to show off his strong vocals, hitting high notes with ease, but he was also able to show just how great he is at interacting with his fans. JUNNY didn’t hold back on engaging with fans, including generously reaching for fans’ phones to record videos for them, taking phones that were tossed on stage from the crowd, reaching over and completing hearts, jumping off the stage to get closer to the crowd, and just talking with fans while on stage. Prior to performing his song “Not About You,” he shared that the song was about his ex, to which the audience began to boo. To his amusement, someone in the audience asked him if he needed a new one, to which he slyly responded that he might. Simple, yet charming interactions like this, along with his catchy songs to sing along to, kept the audience enthralled from start to finish. With his set only lasting one hour, though, the short set left fans yearning for more. After JUNNY wrapped the show with “OH!!” and “Thank You,” fans continued to linger at the venue, as if in disbelief and denial that the show was already over. 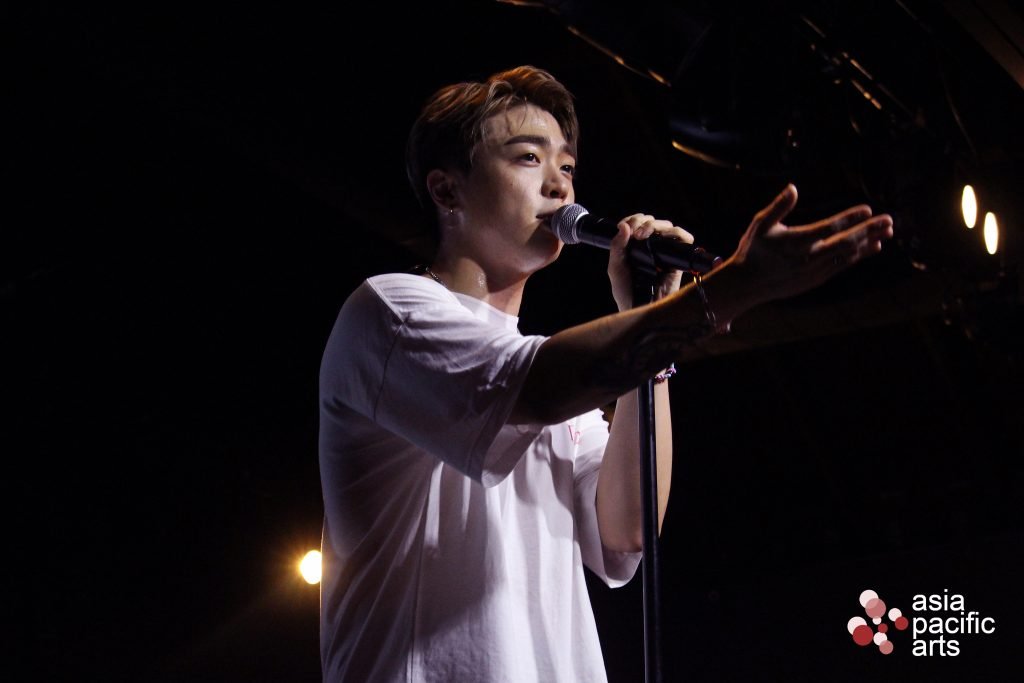 Despite JUNNY’s amazing energy and performance, the venue of choice unfortunately put a big damper on the overall experience. Taking place at such a small venue had its perks—fans were able to get close to the singer, and his voice easily resonated throughout the venue—but this specific spot also had its downsides. The 1720 isn’t located in the safest of areas, and seeing the crowd of young fans (especially female fans) lined up outside against the graffiti covered walls near Skid Row before the show was enough to raise safety concerns. Thankfully, fans seemed well aware of their surroundings and moved in packs before and after the show.

During the concert, the lights stayed similar to the standard lighting of a nightclub — dark, with occasional strobe lights. Not only was the lighting dim, making it difficult to see JUNNY at times, but it felt like there was also enough flashing lights to induce a seizure if anyone in the audience was light-sensitive. With the day of the concert being the hottest day of the summer so far in LA, the venue sadly also did not seem to have any AC. Fans were requesting water from staff members walking by, and sweat could be seen dripping from everyone as the night went on. An unexpected upside to the short show was that it was short enough to finish without any medical concerns.

Even though the evening did not go without issues, JUNNY put on a fantastic show and kicked off the tour with a strong start.