Veteran Japanese hip hop band, Teriyaki Boyz, made their return to the U.S. at the 2022 edition of 88rising’s Head in the Clouds. In their 17 years together, the group has also covered various facets of entertainment independently. From fashion to music, the quintet continues to grow and shape worldwide culture with their influence. Their most popular track, “Tokyo Drift,” still trends internationally since its inception in 2006. More recently, the song’s legacy was further heightened by algorithmic recommendations on streaming platforms, as well as Rich Brian’s freestyle in the early days of the 2020 COVID-19 shutdown.

Individually, each member has been working on their own projects over the past decade. Ilmari and Ryo-Z have been performing together as RIP SLYME. Rappers Wise, Nigo, and Verbal—who is also in m-flo—have all been booked and busy in their own careers throughout the years. Even though their last album as Teriyaki Boyz was in 2009, the five members came together to collaborate on “Morë Tonight” featured on Nigo’s latest album. Although Nigo wasn’t present at HITC 2022, he’ll be performing ComplexCon in Long Beach on November 20th. The four members of Teriyaki Boyz couldn’t confirm if they’d be a surprise cameo during the upcoming I KNOW NIGO performance at ComplexCon, but if so, that means attendees are in for the reunion of a lifetime.

Asia Pacific Arts had a chance to catch up with the legendary group at this year’s Head in the Clouds before their set.

APA: How did all the five members come together to form Teriyaki Boyz?

Ilmari: This is way back in 2003 when Nigo wanted to put together an album of overseas producers and Japanese artists. He asked the four of us to join on a song before Teriyaki Boyz was formed. But the song got such good traction that he wanted to do a whole album with us together. That ended up leading to the formation of the group.

APA: How did Teriyaki Boyz get involved with 88Rising and Head in the Clouds?

Verbal: We haven’t been performing together for quite some time. But “Tokyo Drift” had been streaming and a lot of artists had been doing remixes. So around that time, I was talking to Sean while I was in LA—and these guys know, so correct me if my timeline is wrong—and he pretty much asked that we should do something together. Maybe do a remix of “Tokyo Drift” and one thing led to another. He was like, you guys should just get on stage at Head in the Clouds. Of course, I asked the rest of the guys, and we were super down. It just kind of happened.

APA: Nigo isn’t here, but he’ll be at ComplexCon. Will you all be there too?

Verbal: We can’t really disclose. Even though Nigo couldn’t make it here, he wanted us to perform anyway because it leads up to things as he also just released I KNOW NIGO. It was the first time for us to get back into the studio. He liked the whole vibe because it felt like back in the day. I think you know it’s safe to say that we might be doing more shows in the future.

APA: That leads straight into the next question: how did you all come together in the studio to record “Morë Tonight”?

Ryo-Z: The project itself was quite sudden. Pharrell set over the instrumental and said he needed everything recorded by that week. We got in the studio and pretty much just laid out the vocals. We didn’t have much time to…

Wise: We had three days, or something like that.

Ilmari: When we did get in the studio, it reminded us of how it was like back in the day when we were recording. It’s different from how our respective groups are.

Verbal: Just to fill in, Q1 of 2021 was around the time when Ilmari, me, and some of us were buzzing about a potential comeback because Nigo was saying that he’s going to release an upcoming album. So Ilmari and I remember talking to him saying, “Hey, did you hear that conversation about us? Doing a track like that together?” We would ask Nigo and he was like, “Yeah, I think it’s going to happen.” But after that, we just didn’t hear anything. So, we just assumed after summer that it wasn’t going to happen.

Then—as Ryo-Z was saying—one day Pharrell said, “Here’s the track and we’re sending you the files.” And we’re like, okay. Then we call Steven Victor—he’s Pusha T’s A&R—to set everything up. We asked when he needed it by, and he said that week. That’s when we jumped into the studio, and we were almost forced to go back to the grind of the way we used to do things. It was super fun. But yeah, it just kind of happened. It was like a whirlwind.

APA: Please tell us a little bit about what each of you have been working on.

Ryo-Z: Ilmari and I are part of RIP SLYME, and Wise is a supporting member of the same group too. During COVID, there wasn’t much going on. But now festivals are picking up, so RIP SLYME is attending a lot of festivals in Japan right now. Teriyaki Boyz is also happening, so everything’s getting hectic.

Ilmari: Right now, it’s two of us plus Wise as support. All we need is Verbal to join.

Ryo-Z: Yeah, there was a show in Nagasaki a couple of weeks before we came to LA. Basically we were each doing a showcase, m-flo and RIP SLYME included.

Wise: I’m also working on my own music too, and we could have done the Teriyaki Boyz at another showcase, which we did talk about. But in the end, we decided to just keep it for 88Rising.

APA: Quite a lot of people at Head in the Clouds are familiar with “Tokyo Drift,” but didn’t grow up with it. What do you want the audience to take away from your performance here?

Verbal: That we have a bunch of songs besides “Tokyo Drift.” I’m kind of curious how much people know. We might even ask that on stage today. It was kind of cool because we’re looking through all the streaming sites like Spotify, and we see a lot of people doing remixes. “Tokyo Drift” became its own kind of animal. We’re curious how the crowd’s going to perceive us because we’re going to be performing a lot of songs from the older catalog.

APA: This will be Teriyaki Boyz’s first U.S. performance in a long time. What do you want to tell your fans here who have been around since Day 1?

Wise: As part of the Asian community, it’s such an honor to be here at 88Rising as a guest. We’re excited, and we’re going to have a lot of fun. We wish for the fans to have fun as well.

Verbal: We just want to thank Sean and the whole 88Rising family for inviting us and giving us this opportunity. We felt like we just traveled time going back to the recording booth for “Morë Tonight” on Nigo’s album. The last time we recorded was…

Ryo-Z: Probably over ten years ago.

Ilmari: We’ve known each other since high school.

Verbal: Yeah, so when we got back together in the studio, we just meshed real quick. It was super fun. I’m super excited. This 88rising stage made us rehearse a lot, and it was a lot of fun since there was a lot of synergy there. I have to say, we’ve never rehearsed this much ever. I think even when we were active, we never really rehearsed as much. We’re just hoping everybody feels our show and enjoys it.

Ilmari: We just watched Atarashii Gakko! and they definitely practice a lot more than us.

Verbal: Which is not a bad thing.

Ilmari: We might perform the old school breakdance, so check that out. 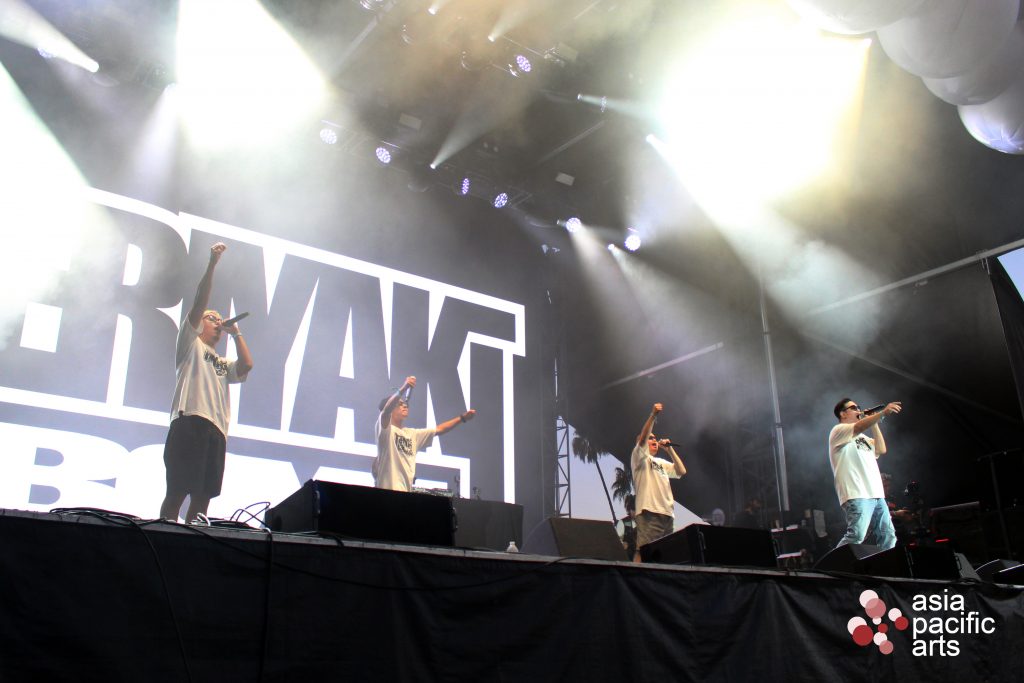