Korean band The Rose will be setting off on their third stateside tour this autumn, as part of their Heal Together World Tour. Beginning in October on the East Coast, the band will play a total of 16 cities, completing the North American leg of their tour mid-November in Mexico City.

Debuting in 2017 with their sorrowful rock ballad “Sorry,” The Rose has been making music on all fronts: releasing mini albums Void and Dawn, taking part in various drama OSTs, and having member Woosung participate in JTBC’s SuperBand.

Unfortunately, the entirety of their career can’t be seen only through rose-colored glasses. In 2020, the group filed a lawsuit against their previous company, J&Star Company, for contract termination, claiming the company did not pay the group and demanded rigorous promotional schedules. Following their lawsuit, members Dojoon, Hajoon, and Jaehyeong enlisted for their mandatory military service, while Woosung kept busy as a soloist to promote himself and the group – opening for Epik High’s U.S. tour, releasing his album Moth, and going on his own promotional tour for said album.

Completing their military duties and settling their lawsuit, the band released their latest single, “Beauty and the Beast,” in December 2021. Along with their tour announcement, The Rose also shared that they’ve officially signed with Transparent Arts and Wasserman Music and will be releasing their first full studio album, Heal, by the end of this year. 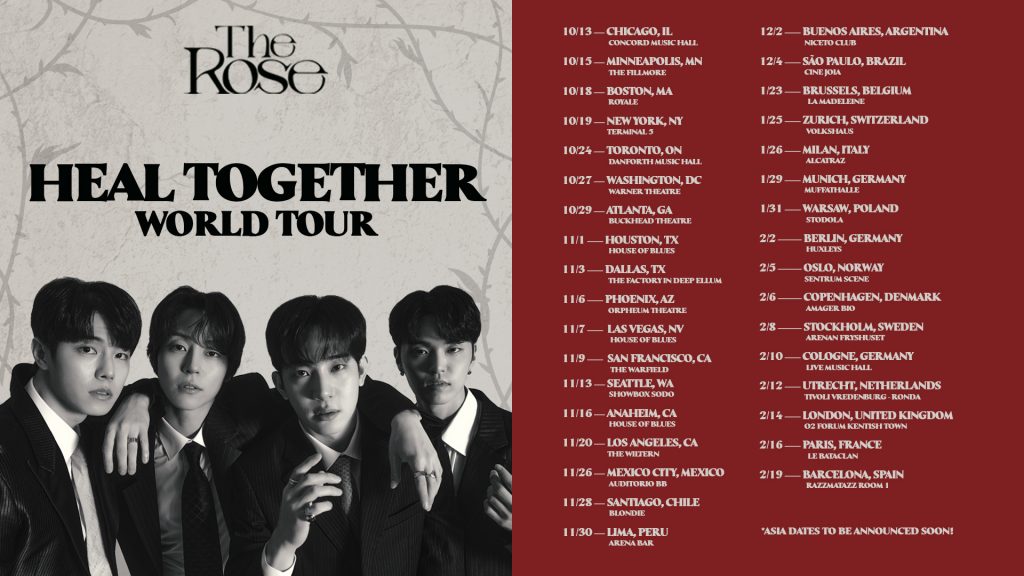