Bay area native Rosalie Chiang, known for her role as the voice behind the titular character of Pixar’s Turning Red, attended Crunchyroll Expo 2022 as a special guest. Alongside other guests like Kaiji Tang, voice actor of Jujutsu Kaisen’s Satoru Gojo, Chiang joined a panel to discuss AAPI representation in anime and challenges AAPI face in the industry today. APA sat down with Chiang, aptly wearing a Death Note shirt, to chat about anime, getting her start in acting, and working on Turning Red.

APA: It’s the final day of Crunchyroll Expo. How’s it been going for you?

Rosalie Chiang: Oh, I’ve had lots of fun here. This is my first convention. To be part of this and seeing all the other anime fans gathering and celebrating anime has been super fun and inspiring honestly.

APA: I noticed you’re wearing a Death Note t-shirt. What are some of your favorite anime?

Chiang: I would say Cowboy Bebop because I love the noir style, and I’ve cried multiple times. And Kaguya-sama: Love is War. I think it’s such a funny show. Even though it can be really outrageous, it’s really grounded because I feel like anyone, as a teenager, can relate to those experiences. Perfect Blue was really traumatizing, but I really loved it at the same time.

APA: With your experience as a voice actor for Turning Red, do you have any interest in voice acting anime? If so, what kind would you like to be in?

Chiang: For sure, I’m definitely interested in doing English dubs. I used to just watch stuff all the time, and then I realized there was English dubbing, which is completely different from Japanese because it’s adapted more for Western audiences. I’m open to anything, whether it’s action or rom coms.

APA: You participated on a panel here at Crunchyroll Expo about Asian representation in entertainment. Can you share how you got your start as an actor, and what inspired that?

Chiang: Yeah, I would say overall, like Disney Channel and Nickelodeon. Those shows are what initially inspired me. When I was seven, I didn’t have a very broad sense of TV and movies. But what really sparked my desire to start acting was when I started watching more adult shows like The Office and The Simpsons. My two main idols are Steve Carell and Nancy Cartwright. Steve Carell because he just has such a natural way of acting out really outrageous situations and Nancy Cartwright because when I saw a video of her doing all of her characters in The Simpsons in 40 seconds, I was just so impressed. I have never seen a voice actor demonstrate so much of their work at once, and that inspired me to get into voiceover.

APA: In an interview, you brought up that when you wanted to get into acting your mom was initially perplexed, but your parents got you signed up for acting classes to get started. How has this journey been?

Chiang: That journey honestly hasn’t ended yet. It’s still going on. I’m still struggling with it, but I’m also succeeding at the same time. I would say imagine Mei; imagine her telling her mom and dad she wants to do acting. Let’s be honest, Mei’s mom would be like no but her dad will suggest being supportive. This whole journey has been full of ups and downs, which is very typical. When I was nine, I thought I would book everything, have so many jobs, and become super famous. As time went on and I got older, I realized just how nasty the acting business can be because each audition has like 100 people for one role, you face rejection every day, and if you even land the role, you don’t know if the show will get picked up. I’m just playing it by ear and seeing what happens, but I’m also working on my craft.

APA: Sometimes when we’re going through uncertainty, it’s helpful to have a goal to be focused on. In your ideal world, what kind of role would you like to play, whether it’s as an actor or voice actor?

Chiang: Originally, I was very in love with voiceover and thought, “Oh, I just want to do this for the rest of my life, and that’s it. I don’t want to do any live action acting.” But after I filmed a little TV show, I made so many friends. Those bonds were something I didn’t realize I needed. I would love to do something like Louise from Bob’s Burgers because she’s such an interesting character. She’s like Mei, in that she’s really ambitious and determined, but with a psychopathic side. I also really like Kaguya Shinomiya from Kaguya-sama: Love is War because of her range and relatability as a teenager. She’s reserved on the outside, but inside, she’s freaking out all the time. 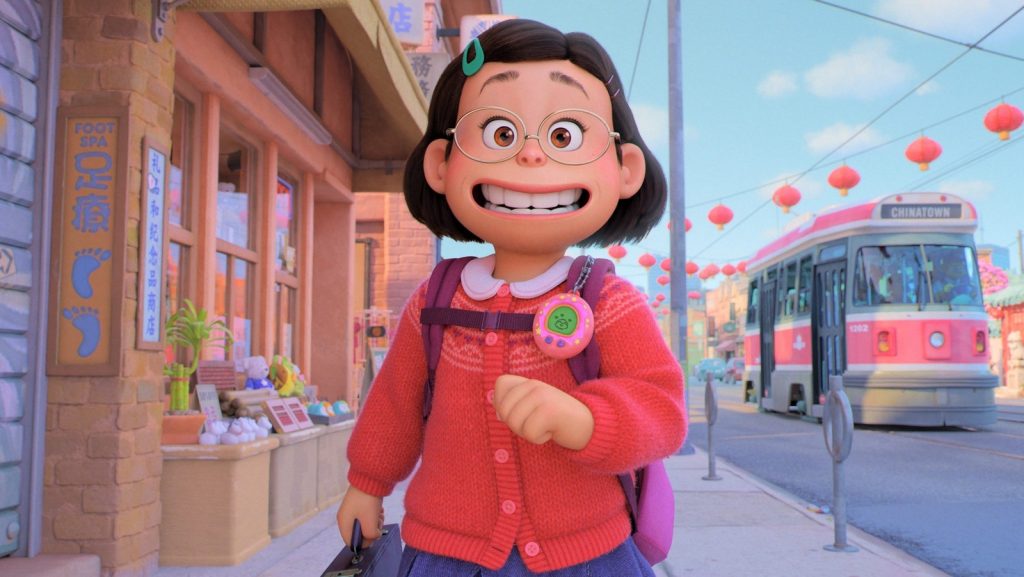 APA: Let’s chat about Turning Red. It’s a deeply personal story for director Domee Shi and even you, as you experienced your pre-teen years while working on the film alongside the lead character Mei. How was it working on the film while growing with Mei?

Chiang: I booked the film when I was 12. At that point, I felt like Mei was really similar to me. She’s determined and fights for what she believes in. As time went on, I really understood where Mei was coming from about her relationship with her mom and friendships because I was going through it too. When I was having dinner with Domi and our producer Lindsey, we were sharing stories about growing up, and I realized our experiences are not that different. I thought my personal coming-of-age experiences were almost wrong because it was so different from what I was seeing on TV. After seeing Turning Red and talking to other Asians about their relationships with their moms, I realized my experience is universal.

APA: Speaking of relationships with moms, you worked with Sandra Oh, who played your mother in the film. Not only as your “mother,” but as a veteran actor, did she offer you any helpful advice?

Chiang: It was an incredible honor working with her. She was one of the few Asian actors I knew in Hollywood. And when I found out she was playing my mom, I was ecstatic. She’s such an incredible woman who gave me a lot of advice. The most valuable thing she told me was to be kind to yourself. As a teenager, we can be really self critical and hate ourselves for no reason because we feel like we have to. I’ve always had sort of a negative perspective on life, especially going into the acting business because I just face rejection all the time, and it wasn’t going anywhere. From when Pixar initially expressed interest in booking me, it was two years until they actually did; in that time period, I could have been fired at any time. I was so nervous. After watching the movie the first time, I hated my performance. I thought I did a horrible job and that people were going to hate my voice. After probably the fifth time watching it, I was able to appreciate all the work and the emotional ups and downs.

APA: To wrap it up, what’s next for you?

Chiang: I can’t share specific names or projects, but I have stuff coming out for both voiceover and live action. I’m just really excited for people to see it.