Body Weather Laboratory, a research forum and training ground for individuals to explore the interaction between movement and the external environment, presents their 19th installment of the Flower of the Season series, which fosters collaborations between dancers, choreographers, artists, and musicians. The season’s performance features dancer/choreographer Oguri (Venice, CA) with dancer Andrés Corchero (Catalonia, Spain) in “Body as Evidence,” an experimental dance work that draws upon Ray Bradbury’s dystopian novel Fahrenheit 451. The show, which was supported by the Los Angeles County Department of Arts & Culture, and the California Arts Council, was performed at the Electric Lodge in Venice, CA, which is also the city where Bradbury lived for many of his formative years. In this era of disinformation and censorship, the performance could not be more timely, drawing disconcerting parallels between the book burning in the novel and the book banning happening in schools today.

The performance is a series of vignettes that explore the usage of books as props, opening with two piles of books scattered on the ground that seem completely ordinary, at least until one of the piles started shifting to reveal Oguri in a fetal position. In this first vignette, which explores the concept of books and knowledge as weight, Oguri crawls around the stage, ponderously dragging the long string of book spines on his own spine as if to symbolize the heavy responsibility that comes with knowledge. Shortly after Oguri steps off the stage, Corchero extricates himself from the other pile of scattered books and proceeds to organize them into three piles. A curious segment follows in which the two dancers interact animatronically with each other like humanoid robots while balancing a small stack of books on their upper back, giving the illusion that they have square robot heads. Even during the less serious scenes, Oguri’s incredible body control lends a mesmerizing quality to his movements. 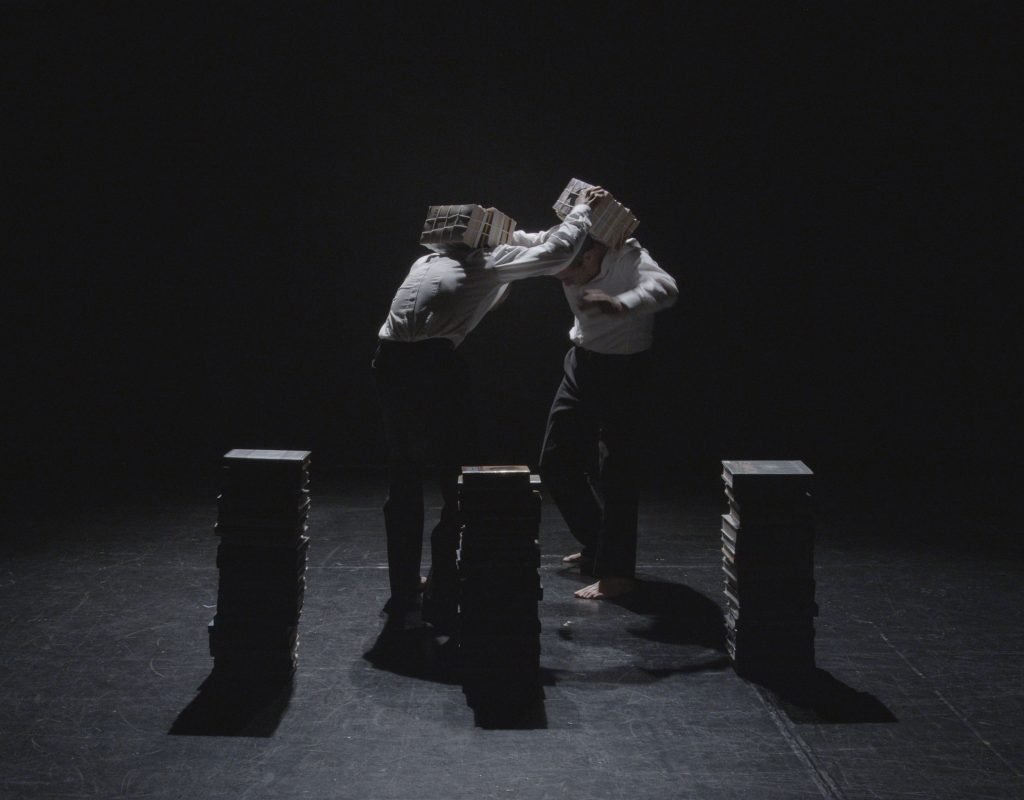 Image selections by Oguri from video by Antonia Lorenzo

In another scene, the dancers arrange the books into a circular, maze-like formation and dart gracefully between the books, gently replacing any books that get accidentally knocked over. Instead of sacrificing freedom in an attempt to attain sterilized predictability, their graceful approach to recovering from these “accidents” acknowledges the reality of imperfection, a bold statement in a world overtaken by Instagram filters and highlight reels.

The performers’ expressive delivery of unexpected moments captivated the audience’s attention. At one point, the dancers held up lit candles unnervingly close to dangling books, eliciting an audible “Oh no” from the audience. Spoiler alert: no books were burned, but it was not until the candles were blown out that the audience collectively exhaled in relief. There were also more humorous, borderline absurd scenes that gave the audience a hearty chuckle, such as when the dancers headbutted and dodged the hanging books like cowardly boxers. The lighting design, while not fancy, further reinforced the impact and mood of each scene. Bright lights illuminated the absurdist, comedic moments. Softer lights bathed the contemplative scene. Strong shadows accentuated the tensest scenes.

The performance can be interpreted as a commentary on our society’s fraught relationship with books and knowledge. On one hand, books offer us different ways to understand our world, create meaning in it, and relate to each other. On the other hand, books that question or invalidate the status quo are increasingly seen as attacks on morals and personal identities. Similarly, knowledge, which has provided our society with the means to help each other and communicate across borders, is being weaponized to drive factions of our nation ideologically further and further apart, to the point where the lines between information and disinformation, between reality and belief, are disappearing. This thought-provoking work explores the interaction between movement and books and creates vignettes that celebrate free speech and creative expression while also warning of the dangers of censorship and inauthenticity.