Released on June 10, 2022, Grown-ups, written and directed by Takuya Kato, was featured at this year’s New York Asian Film Festival. The Japanese film is an intimate narrative about the lives of two college students, Yumi (Mai Kiryu) and her boyfriend Naoya (Kisetsu Fujiwara), as they navigate the difficulties of their relationship.

Grown-ups at times feels like a home movie, foregoing a widescreen aspect ratio and opting for a grainy look with close-up framing. When watching the movie, you feel as if you’re in the room with the characters, peeking in from behind houseplants or through stair banisters, sometimes only seeing the back of a head. At times it’s as if we’re intruding on the couple’s private moments, from the sweet, lovey-dovey flirting to the heated, frustrating arguments. Grown-ups is also sparse in its use of music; in fact, the only song that occurs in the movie is during the scene when Yumi and Naoya share their first kiss, highlighting the magic of a pivotal moment of the relationship. Director Kato does not shy away from letting the silences between dialogue linger like they might in a real conversation, making the characters and events feel even more life-like.

The story itself is told in non-chronological order, although it’s not obvious at first. It skips around from present to past, often juxtaposing certain scenes to show how a character’s situation or perspective on life has changed. For example, we find out early on that Yumi is pregnant and she is unsure of who the father is. Soon after, we are shown a scene from a couple years ago in which Yumi is on vacation with her girlfriends at a resort, gossiping about boys and what it would be like to lose their virginities. Later on, we jump to a moment that occured between these two events, when Yumi and Naoya take their first overnight trip together to that exact same resort and she loses her virginity to him. One’s college years are often filled with major milestones associated with adulthood, but because we’re living day to day, those moments of introspection when we realize how much we’ve changed are rare. With Grown-ups, Kato accentuates these pivotal events that come with transitioning into adulthood by laying moments from the past and present together, end to end, in direct contrast. 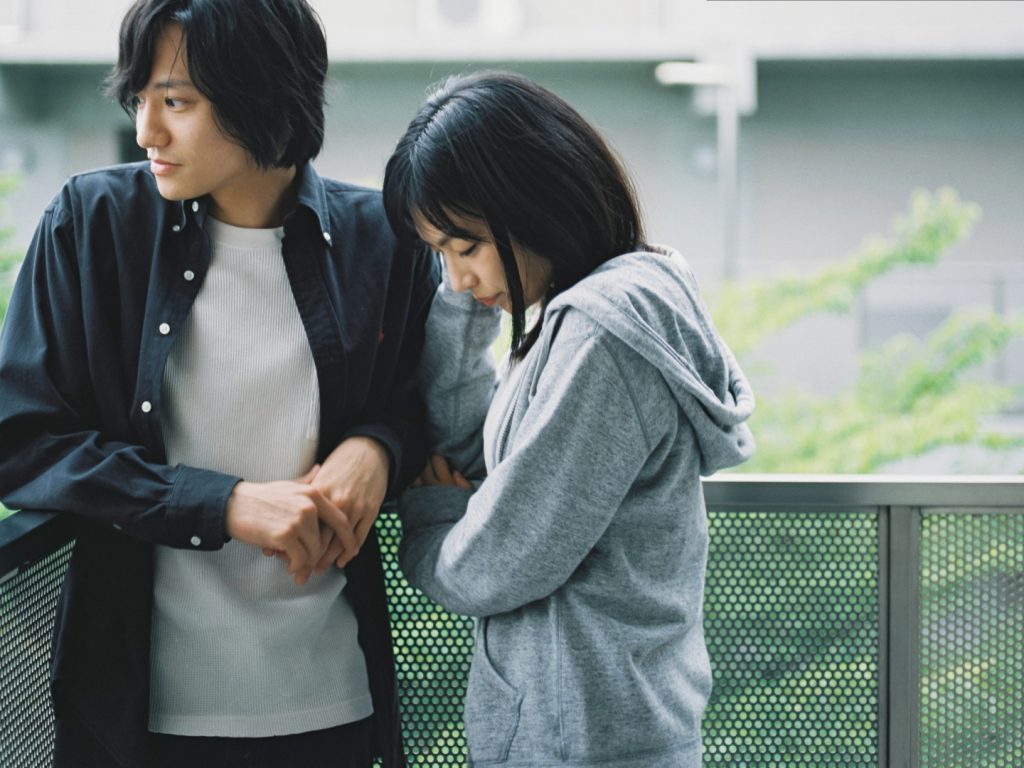 Sexism, misogyny, and the effects of toxic masculinity on women are heavily explored in the film. When Yumi visits a hospital to get a consultation on her pregnancy, she tells her female doctor she is unsure who the father is, to which she receives judgmental remarks. The same sentiment is reflected in her arguments with Naoya, whose line of thinking seems to be that he has no claim to any responsibility in the relationship. He tells her, “You’re upset over your own choices. If there’s other stuff like that, you should sort it out now.” While he offers to stay by Yumi’s side and encourages her to have the child, there are selfish reasons lying under the surface. For one, Naoya is trying to atone for his choices with his previous girlfriend, who he had convinced to have an abortion and also cheated on. The levity with which he treats Yumi’s situation, the complete lack of awareness of what she’s going through both physically and mentally, as well as his continued imploring for her to perform a DNA test on the unborn child shows that he is not as devoted as he tries to appear to be. (TW: sexual assault) Yumi is at the age where the expectation for young girls by their peers flips from purity and chastity to sexual in nature. When it comes to sex, Yumi also finds herself being the one to bear the burden. Both Naoya and Yumi’s one-night-stand partner express their distaste for condoms. With Naoya, Yumi eventually goes on the birth control pill despite her initial hesitancy in order to preserve their relationship. When they are temporarily broken up, Yumi hooks up with a friend of a friend, who rapes her when he ignores her pleas for him not to have unprotected sex.

Because we as the audience see Yumi and Naoya’s story play out non-linearly, it’s easy for us to spot the red flags. But from Yumi’s point of view, she is drawn deeper and deeper in without realizing the hold Naoya has on her. The arguments between the two start off quietly and could almost be regarded as polite in American standards, but as the rifts in their relationship widen, the fights become more intense and borderline violent. The littlest things each once found quirky about their significant other have since soured and fermented into indelible annoyances. The two are on separate paths and must acknowledge that if they continue down where they’re headed, they won’t end up together. Grown-ups is a wonderful character study of two people who appear to be similar on the surface – young, artistic students – but whose core values differ greatly. Naoya exudes the selfishness and indignation of a man who wants to reap the benefits of a romance but not the responsibility, and Yumi encapsulates the fear and exhaustion of a woman who has had to shoulder far too much for far too long.

Kiryu depicts Yumi’s maturation throughout the film beautifully. We see her struggle through her darkest moments essentially alone: she’s unexpectedly dumped by Naoya weeks after they move in together without being given a reason (before they get back together again), finds out she’s pregnant (possibly from a time when she did not give consent), and loses her mother (a forceful coming-of-age moment for any young adult). These are all some incredibly tough scenes and Kiryu does not hold back on her performance. Rather than ending on a dramatic note, Grown-ups comes to a close with quiet confidence. In the final scenes, we finally see Yumi take a stand for herself and break up with Naoya after he admits he doesn’t want to be a father in an argument. The last two scenes display perhaps the strongest contrast in the film. We see the moment in which the two of them moved in together, happy and giddy in a newfound relationship. This is then followed by the scene when Naoya finally moves out and hands Yumi the key, the goodbye between them unsaid but concrete. As the credits roll, Yumi quietly prepares food and sits down at her kitchen table to enjoy a meal she’s made by herself, for herself. She is alone but finally content.