Starting on August 16th, Korean rapper CAMO will be bringing her Wifey tour to Los Angeles, San Francisco, New York, and various stops in Canada in a quick week-long trip. Despite her name meaning to disguise or hide something, the artist had no problem sharing her thoughts, creative process, goals, and more with APA ahead of her tour.

Having debuted in 2020, some may think it’s too soon for the rapper to be touring internationally, but for CAMO, the timing just felt right: “It’s right before my new release, and I wanted to show my energy and some of my new shit to my U.S. and Canada audiences since I never really had the chance to before.” Her most recent song, “Freak Like Me,” was released in January of this year, so the solo rapper wanted to time her tour perfectly to match up with her upcoming album drop. “It’s been so long since I released something, and I’m so ready to show the new side of me [with a full album],” she shared. Regardless of her new music, however, CAMO still holds her older releases very dear to her heart. Upon its release in 2021, CAMO deemed her song, “Wifey,” as her favorite of her own music, and even now, she still feels the same way. “Whenever I listen to or perform that song, I remember those times when I didn’t even know I would be making music as a career. I’m still proud of myself for going through all the shit and the hard times, and for not giving up and believing in myself. I give up really easily, so the song means more to me,” she explained. At the same time, she also admitted she still doesn’t feel like she’s entirely figured out her own color yet: “I do have my style already, but I [also] am still finding it. Trying [things] out and experimenting, I just want to make it way better.”

Taking a relaxed approach to her music, the rapper has mentioned previously she likes to feel her emotions as they come, as the candid experiences help her with songwriting. Elaborating on that, she mentioned how important the overall vibes of a song are to her: “If I vibe with a beat, I hop on, freestyle some flows or toplines, and write lyrics on top of that. Then, I’ll add on some details and adlibs, and keep on going with the development.” Aside from having a laidback creative process, CAMO also doesn’t shy away from working with others. The soloist has released several collaborative tracks thus far, working with artists such as Simon Dominic and JMIN, and even recently announced that JMIN, DJ Yungricain, and Butch Dawson will be joining her on her tour. Despite her star-studded list of past collaborations, if given the opportunity, she would love to work with French-British rapper Octavian: “I have been really into him since last year, and he just released an album, ALPHA. He’s my favorite artist right now.”

In addition to her musical aspirations, CAMO strives to be a positive influence and to provide a voice for those who can’t speak up: “I’ve always wanted to help out people who need it, and I still do. What I can do right now is build up my voice, and use it wisely to help ANYTHING I can.” Speaking on her personal experiences, she mentions the entertainment industry as something she hopes to change for the better. “Even in this K-Hip Hop industry, it can sometimes be a hostile environment, especially for a female rapper or a small artist like me,” she shared.

Fashion is part of how CAMO expresses herself, often wearing daring outfits when making public appearances. Regarding her upcoming tour, she shared that she’s personally taking part of the outfit styling, alongside a stylist. Crediting other female artists around the world as her main inspirations, the rapper also said that she’s leaning away from the oftentimes more risque outfit choices she’s gone with in the past: “Imma keep it quite simple and tasteful this time. I realized I have to be 100% comfortable while performing, but I’ve been kinda neglecting that. Now I know, though.”

To build up anticipation for her tour, the artist revealed that she’ll be previewing some of her new tracks during the tour, confidently stating that her new music is “gonna be game changing.” For those unfamiliar with CAMO, she offered a recommendation: “Listen to “Horizon.” If you fuck with the song, you’ll like my music.” 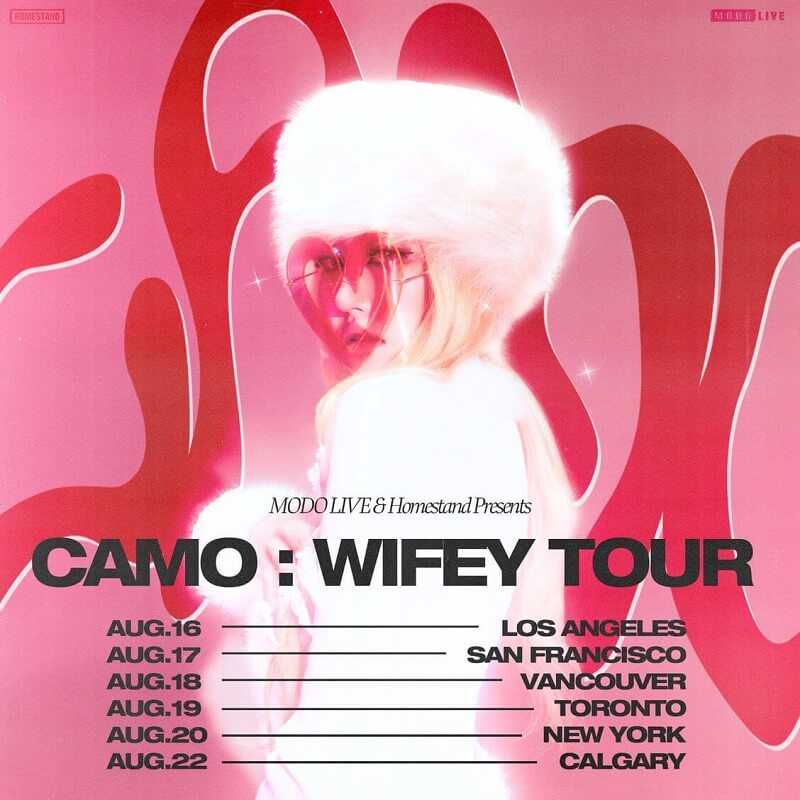