Skip to Content
Home Review Amazon’s new sci-fi show “Paper Girls” is a fun, metaphysical blast to the past

How would you react if you met your future self and she didn’t turn out to be who you expected? That’s the question four pre-teen girls from Stony Stream, Ohio are forced to face when they are suddenly thrust into the throes of a time war. Erin, Mac, KJ, and Tiffany are 12-year-old girls in 1988, biking their route through the Halloween-ravaged neighborhoods of their small suburb to deliver newspapers in the wee hours before sunrise. Soon, the four kids find themselves in the midst of a time war between two opposing forces and are catapulted 31 years into the future into 2019.

Paper Girls is an Amazon Original Series adapted from the comic series of the same name, created by writer Brian K. Vaughan and illustrator Cliff Chiang. With the story’s main characters originating from the 1980s, it seems like Amazon Studios is trying its own hand at recreating the success of Netflix’s Stranger Things. After all, both are about a group of kids battling forces of evil (and at least partially set in the ‘80s). However, Paper Girls takes a different approach to showing what life was like in the ‘80s, shedding light on more of the grim aspects of the decade, including racism, classism, and homophobia. During a San Diego Comic-Con panel for the show, Vaughan mentioned, “We watched a lot of fiction that views the ‘80s through rose-colored glasses. But Cliff and I lived through the ‘80s, and it wasn’t always so awesome. So we wanted to do something that was anti-nostalgic, that was about recognizing we’ve actually made a lot of progress and it’s worth pushing forward and looking ahead, not constantly dwelling in the past. So even though some of our show takes place in the ‘80s, it isn’t so much a love letter as it is a death threat.” That said, Paper Girls does still bring back the nostalgia of that time with its soundtrack of ‘80s pop and rock songs.

In Paper Girls, each of the main characters is a minority in some way, and the girls’ struggles with identity, whether it’s based in race, sexuality, or social class, are amplified when they are provided a glimpse into their future lives.The diverse cast of young, female leads is refreshing. In the first episode, the show introduces each of the protagonists one by one: Erin Tieng (Riley Lai Nelet), Mac Coyle (Sofia Rosinsky), Tiffany Quilkin (Camryn Jones), KJ Brandman (Fina Strazza). The girls are practically strangers in the beginning, bonded only by the singular yet significant fact that they are the paper girls of Stony Stream. For Erin, it’s the first day of her paper route, and although she’s somewhat timid, she’s determined to excel at this job as the responsible elder daughter of her protective, immigrant single mother. Mac is the veteran of the the paper girls — surly but soft-hearted deep down, she has been toughened by the circumstances of her tumultuous home life. Tiffany is strong-willed, ambitious, and embraces her hunger for knowledge, defying the racial stereotypes of the time as a young black girl. KJ, who comes from a wealthy, Jewish family, is seen as the quiet girl, but when all hell breaks loose, her strength and fortitude keeps the others going. Although at times the acting in the show can be a bit over the top, like with Mac’s antagonism and Erin’s brooding, overall the cast’s ability to perform in a range of scenarios from panicky arguments to somber conversations to comedic antics is commendable and keeps the pace of the story flowing. 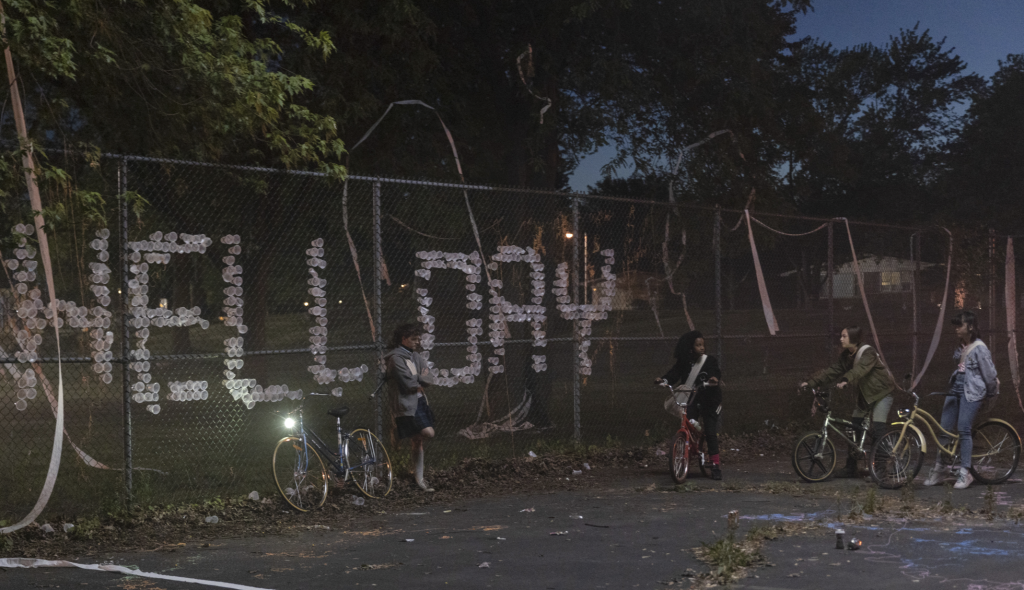 Paper Girls is as much a bildungsroman as it is a sci-fi show, following each girls’ individual journey of growing up as well as touching upon the universal experiences of pre-teen girls. It doesn’t skip over the truly awkward moments of growing up, such as getting your first period and not knowing how a tampon works (one of the most down-to-earth and hilarious moments of the show). Although the paper girls come from different walks of life, there is a solidarity between them that is rooted in their role as underdogs, working a job that’s typically done by boys. The first episode illustrates their unspoken alliance by showing the girls banding together to rescue KJ from a gang of bullies and helping guide Erin through her first day. While the girls’ budding friendships are stress-tested throughout the season, they end up forming an even stronger bond through the trials and tribulations they experience together.

The world of Paper Girls is dictated by two factions with opposing views on how time should be controlled. The Old Watch, who are led by the Grandfather (Jason Mantzoukas) and his right-hand woman Prioress (Adina Porter), believe that rewriting time will unravel everything and are set on maintaining the original timeline to the point that they will wipe people’s memories. The STF Underground, on the other hand, are rebels who believe that the timeline can be changed for the better and keep record of the occurrence of black holes called “foldings,” which act as portals through time. After being launched through one of these foldings, the girls are irrevocably entwined into the time war.

Through the course of the eight episodes, each girl comes to learn the fate of her future. Erin is the first to encounter her older self, who is still living in her childhood home. Young Erin, who has dreams of becoming a Senator, is thoroughly disappointed when she meets Old Erin (Ali Wong), a lonely paralegal freelancer who is essentially estranged from her sister after the death of their mother. By 2019, it’s clear that Erin has gone through many life-forming events but 12-year-old Erin doesn’t understand how she could’ve turned out so far from what she hoped to become. Mac finds her older brother, now a successful surgeon and family-man, and finally has the opportunity to bond with him, although her own future is not what she expected. When the girls later end up in 1999, KJ finds her older self, who is studying film in college and has a girlfriend. Young KJ, who has yet to fully realize her sexual orientation, is taken aback by this discovery, especially considering the lack of progressivness when it comes to gay rights in the ‘80s. Tiff reaches out to her older self for help, who ends up letting the girls crash at her place and assisting them with returning to their timeline. While she has achieved many of Young Tiff’s dreams (becoming valedictorian, attending MIT), Old Tiff has lost the ambition and drive she once had. Faced with the fate of their older selves, the four girls wrestle with the psychological affliction of knowing what will happen to them and ponder the existential question of whether or not the future can be altered.

The first season of Paper Girls ends with many questions still unanswered, with the last episode leaving the audience on a cliffhanger and making it quite clear that this isn’t the end of the paper girls’ route.