K-pop boy band Golden Child performed at The Teragram Ballroom on June 26th on their second stop of their first U.S. tour. Two of the 10 members were absent: Dayeol, the leader who is serving in the military, and Tag, the main rapper who is on temporary medical leave. Meanwhile, the remaining eight members performed on this tour: Y, Seungmin, Jangjun, Bomin, Joochan, Donghyun, Jaehyun, and Jibeom. Despite limited promotions in the US, the group has garnered a robust stateside following. Fans, nicknamed Goldenneses, lined up around the block hours ahead of the show, many clutching the official bowling-pin-shaped lightsticks and handmade signs.

The fans’ anticipatory cheers grew as the house lights dimmed, and an intro video highlighting each member played on the big screen, heightening the excitement of Goldenness. Without further ado, Golden Child emerged from the darkness, their navy button-downs almost blending into the deep blue stage lighting. They launched into their first track, “Ra Pam Pam,” a sultry number with a Latin dance pop beat and flamenco-inspired dance moves. Even in such a dance-heavy song, the main vocalists delivered clear, stable vocals, with Y’s more powerful tone balancing out Joochan’s smoother voice. Continuing with the Latin theme, the next track, “Burn It,” featured a simple, if rather mainstream, Reggaeton beat, but the dynamic choreography formations and melodically robust verses allowed the group to transcend an otherwise generic song. In the final momentous pre-chorus, lead vocalists Jibeom and Seungmin showcased their rich vocal tones, and rapper Jangjun held his own despite the absence of the group’s only other rapper, Tag. While the missing members’ parts were not covered by another member, there were only a few instances when their absence was particularly notable, one of which was Tag’s extended rap sequence at the ending of “Burn It.”

In between songs, the band members introduced themselves and expressed their excitement about their first time back in Los Angeles since KCON 2018. Since then, the members have been busy in Korea; Bomin and Jaehyun have been acting in dramas, Y and Joochan starred in the musical ALTAR BOYZ, Jibeom participated in the popular singing show The Masked Singer, and many of the members have been recording OSTs for Korean shows such as Moonshine and Lonely Enough to Love. To express their gratitude for their US fans who waited for them to return, the group serenaded the hall with ballads “I Know” and “That Guy,” showcasing their top-notch vocals in clean high notes and effortless harmonies as the audience waved their lightsticks and sang along. 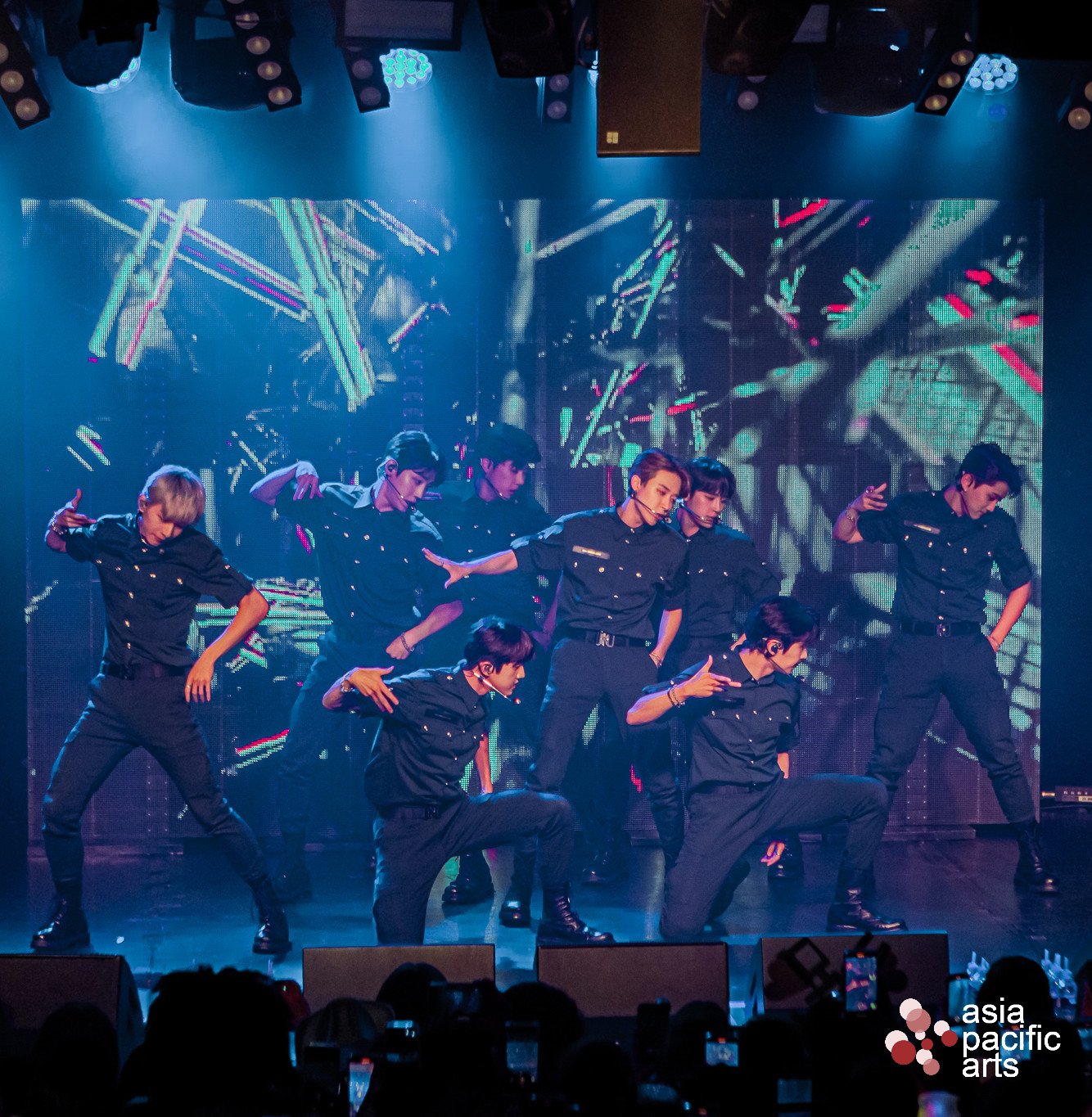 As the members trickled offstage for a well-deserved intermission, the stage screen began playing what seemed like random selection of Korean TV channels–an advertisement, a melodrama, an informercial, a variety show, and a romcom–a video that turned out to be parodies and comedic sitcoms starring the members. The hall erupted into laughter at the members’ straight-faced delivery of nonsensical and over-the-top scenes. This was by far one of the most amusing intermissions in a K-pop concert and a brilliant display of Golden Child’s solid acting skills and chaotic comedic energy.

When the group returned onstage, they switched up the mood, staring intensely into the audience before launching into a captivating dance break and a medley performance of “WANNABE,” “Without You,” and “ONE (Lucid Dream),” their darker and most popular title songs. The erratic bass, tantalizing synths, and striking shifts in texture lend these tracks an alluring, edgy mystique, made all the more irresistible by the band’s electrifying yet suave performance.

Proving their versatility, Golden Child transitioned into several lighthearted and refreshing summer songs like “Pump It Up,” “Oasis,” “Bottom of the Ocean,” and “Sea,” which were complemented by colorful lighting and boyish, playful dance moves. The funky guitar undercurrent in “Sea” and the One-Direction-esque vibe of “Bottom of the Ocean” make these perfect additions to a summer road trip playlist. While there were no fancy outfit changes or extravagant sets in the performances, the band more than made up for the simple production by interacting with Goldenness as often as they could, recording selfie cams on lucky fans’ phones and delighting the audience with special mini covers of English pop songs.

Their official last song, “Crush,” was an energetic and bubbly, albeit overly saccharine, hype song. Thankfully, the boys returned for a gratifying encore, leaving Goldenness with the addictingly singable “DamDaDi” and a soaring fansong “Milky Way.” Holding signs saying “Nothing without you,” which also happen to be the lyrics of the “Milky Way,” the members gave their final words and waved fondly at the crowd, promising to return with better performances and a bigger venue. “You shine bright as the ocean, we love you so much!”

Click on the photo below to see all our photos from Golden Child’s concert in Los Angeles on Facebook! 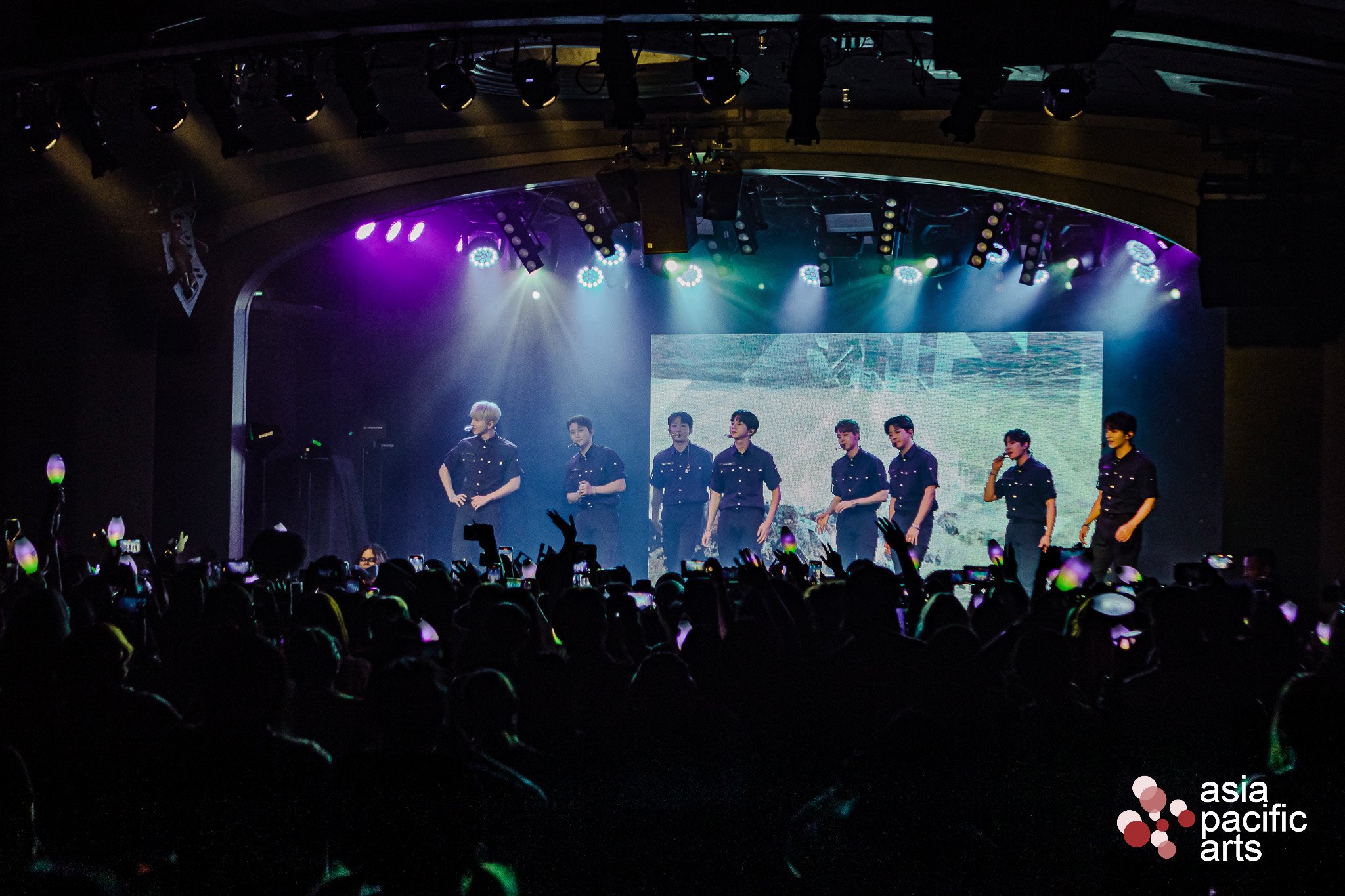