After nearly two and a half years since their last tour in the US, Stray Kids returned to Los Angeles for two sold-out shows at The Kia Forum. Delivering a high production value show and high quality performances, the group performed a three-hour concert that fans, known as Stay, will never forget.

The concert revolved around both their recent album ODDINARY and the theme of being “oddinary.” The various video clips played throughout the night showed the eight members in different situations, becoming infected by the spider’s green venom, alluding to their song “Venom,” and being wrought with frustration and other emotions. This green liquid slowly transformed the members into “maniacs,” but it soon became clear that it was all just a metaphor for finding oneself. In the videos when member Felix was confronted with the question of whether or not he wants to be “oddinary,” he confirmed that he does. This led into the final clip, showing the eight members of the group make their way through various green explosions erupted around the world. The video storyline exemplified the band’s main catchphrase, “Stray Kids everywhere all around the world,” as the members lead the revolution of people becoming their own unique selves. 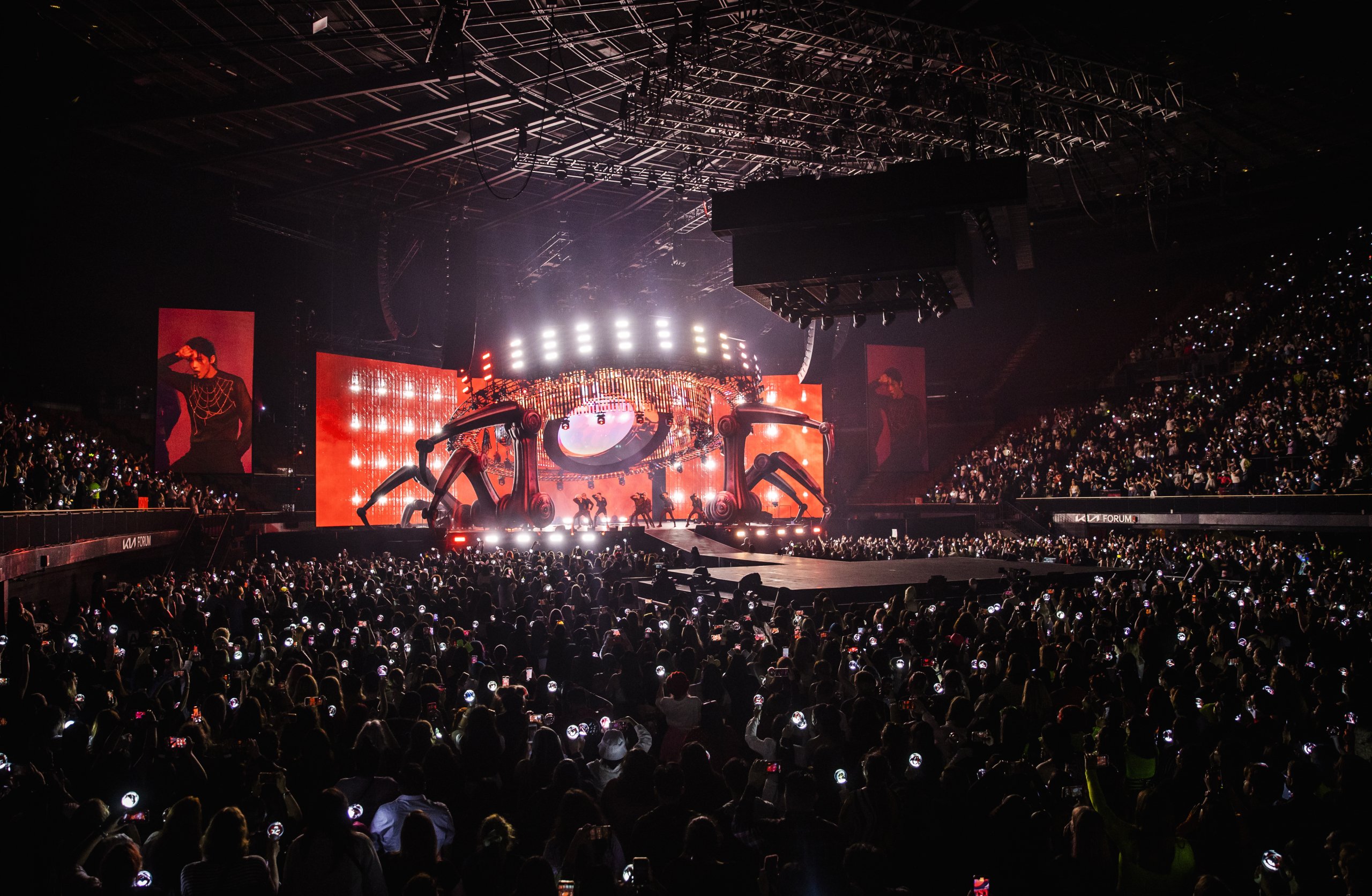 In addition to the storyline woven throughout the show, the group also prepared spectacular performances with stage props and remixes, and even performed some rarer songs to boot. The group paired all of their performances with a live band, adding to the genuine, once-in-a-lifetime feel of the show. Their opening song “Maniac” was followed by “Venom,” which included a simple dance break paired with large inflatable spider legs bursting open on the main stage. Immediately afterwards, the eight members performed a special full group rendition of Bang Chan and Hyunjin’s “Red Lights,” bringing their stage setup of collars and chains from South Korea to the U.S.

The special performances didn’t stop there, as Stray Kids performed concert exclusive remixes for attendees. The main chorus beats were changed for “Side Effects,” and the group also performed traditional style versions of “Thunderous,” “Domino,” and “God’s Menu,” just to name a few. Nearly every touring group cuts down their setlist significantly when touring in the U.S., including Stray Kids, but they also kept some lesser performed songs on the setlist as gifts for their dedicated fans. Mentioning their win on Mnet’s competition show, Kingdom: Legendary War, the group did a simplified rendition of their MAMA 2020 version of “Victory Song,” which at the time served as a prelude to their run on the competition show. Performing Korean versions of their Japanese songs, the group also performed “All In,” “Scars,” and even their song from the anime, Tower of God, “TOP.”

Even with a clearly stacked setlist, impressive stage setups, and a well thought out story line, the group made sure to engage with their fans throughout the night. With nearly every member fluent in English, the translator was rarely needed, and each talking segment was filled with sweet words reminding Stays that they’re the reason Stray Kids feel alive. While Lee Know, Felix, and I.N tested negative the day before the first concert in LA, the members who had contracted COVID-19 the week before were still feeling a little under the weather, yet still performed to the best of their abilities. Mentioning the pandemic and virus several times throughout the show, Stray Kids leader Bang Chan acknowledged how harmful the virus could be, especially to them as performers since it specifically targets the lungs. Speaking candidly about the serious topic to fans, it almost felt as if the leader was discussing it with friends. Keeping these precautions in mind, the group did not get very close to fans even by the side of the stage, but they greeted as many fans as possible. The group also asked for the house lights to be turned on several times, wanting to really take in the crowd and imprint them into their memories, too. Acknowledging every single one of their supporters, Hyunjin even gave a special shoutout to the ASL interpreter in the audience, saying he was nearly moved to tears knowing they were translating all of their lyrics into sign language.

Wrapping the concert with “MIROH” and an encore, each member was equipped with a confetti gun, as they ran across the stage, shooting confetti into the crowd. Despite concerns about show cancellations due to COVID-19, Stray Kids still showed up and showed out. Leaving Stays with countless new memories, the group will be heading north to Oakland and Seattle next, before returning to Southern California yet again to wrap up the U.S. leg of their “Maniac” tour in Anaheim. 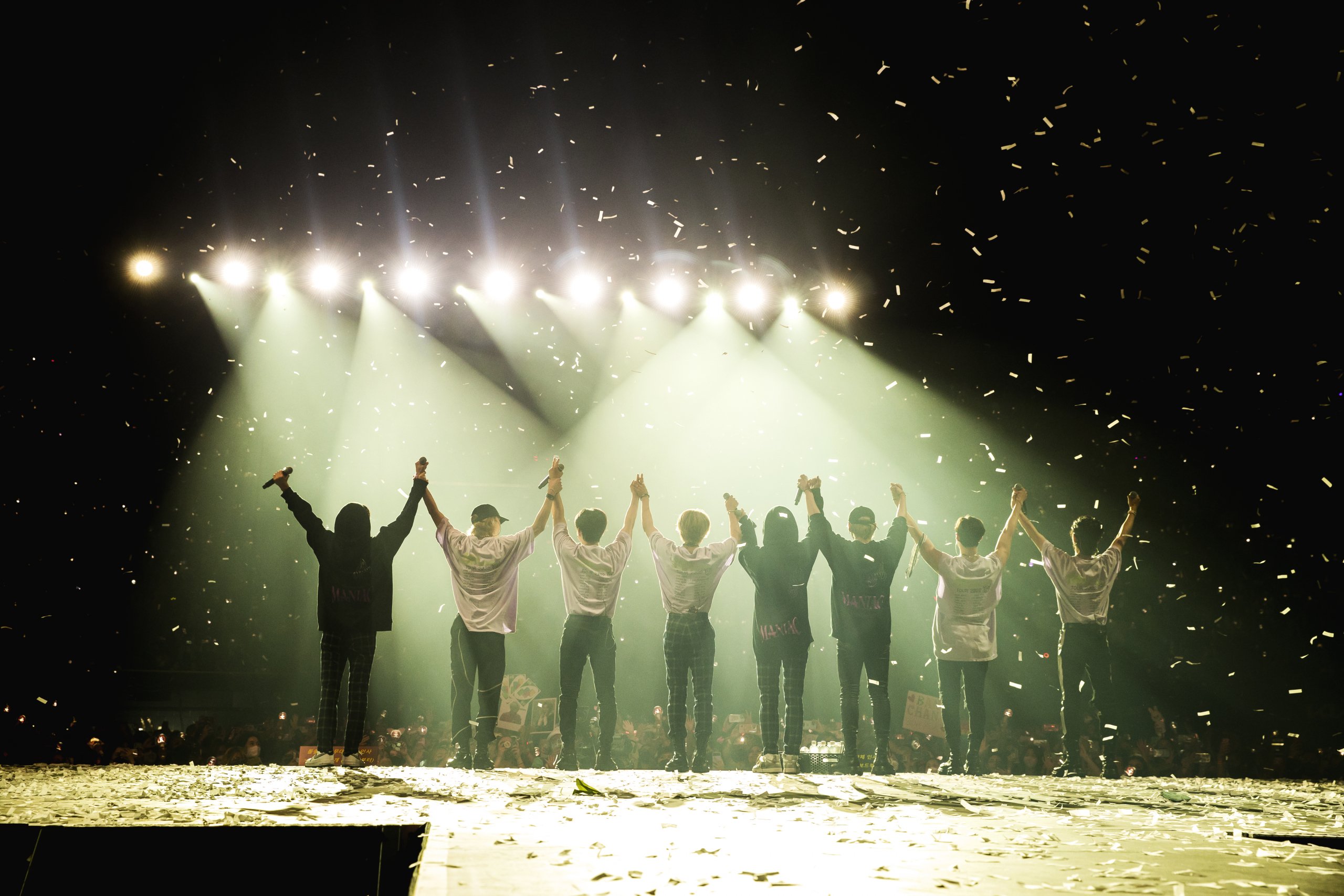