Returning for its fourth in-person event, Goldenvoice and 88rising’s Head in the Clouds music festival will be taking place at the Rose Bowl in Pasadena, CA on August 20th and 21st this year.

The popular music festival focuses on artists under the 88rising label, as well as other artists across the Asian diaspora, making it an event focused on showcasing Asian talent in the West. This year’s lineup features artists from all over the world, including the U.S., Australia, Indonesia, Canada, Japan, South Korea, China, and more.

Headliners for the year include 88rising’s biggest names, Rich Brian and NIKI, as well as a special DJ set, Yebi Labs, to be performed by Joji. Jackson Wang from China will be bringing his Magic Man Experience to the festival. 88rising’s latest rising star BIBI will be returning for her second year. Korean pop artist Chungha will be taking part in her first 88rising event. Also, Korean-American rapper, producer, and entrepreneur Jay Park will be taking the main stage.

Rich Brian and NIKI, who are both from Indonesia, have been 88rising’s top stars since its establishment. Some of Rich Brian’s top hits include “100 Degrees,” “Love in My Pocket,” and “Run It,” which was featured in Marvel’s Shang-Chi and the Legend of the Ten Rings soundtrack, an album entirely curated by 88rising. NIKI’s most popular songs include “lowkey,” “Vintage,” and “Every Summertime,” also featured on the Shang-Chi soundtrack. Most recently, the rapper and singer both performed their own sets at this year’s Coachella music festival. Joji also performed his own set at Coachella, but his appearance at this year’s Head in the Clouds seems unprecedented, as he will be presenting a DJ set. Also affiliated with 88rising is BIBI, who released popular songs “The Weekend” and “Best Lover” under the label. She made her first appearance at last year’s festival, and was part of 88rising’s special performance at Coachella this year. 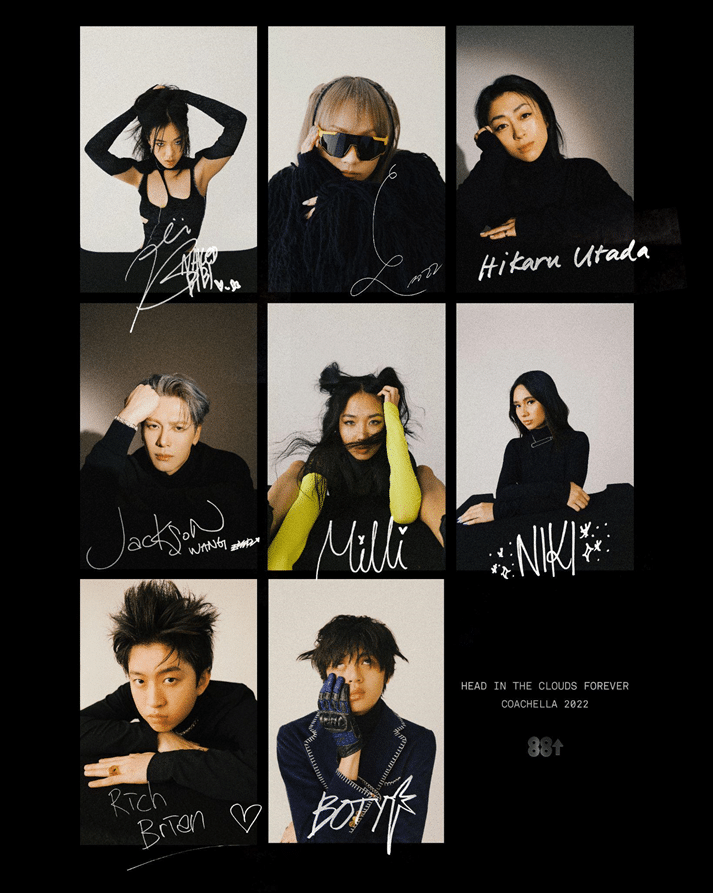 GOT7 member Jackson Wang, Chungha, and Jay Park will all be joining Head in the Clouds for the first time this year, though most of them have prior association with the 88rising label. Jackson Wang has worked closely with 88rising in the past, featuring on songs such as “Walking” and “California,” and performed as part of 88rising’s ensemble set at Coachella as well. Chungha, who released “These Nights” with Rich Brian in 2019, was previously on the lineup for the festival slated for 2020 in Jakarta. The event was unfortunately cancelled due to COVID-19, so this year’s festival will be her first time performing in person with the label. Jay Park, who founded Korean hip hop labels AOMG and H1ghr Music, will also be making his inaugural Head in the Clouds appearance this year. The rapper is known for hit songs such as “Mommae,” “Me Like Yuh,” and “GANADARA.”