Son Lux, a three-piece experimental band consisting of Ryan Lott (keyboard, vocals), Ian Chang (percussion), and Rafiq Bhatia (guitar), shared their artistry with Angelenos at the Fonda Theater on May 15th, 2022. The genre-less trio infuses elements from classical, jazz, post-rock, rock, and more to push the boundaries of musical composition and to create novel soundscapes grounded in the depth and fragility of human existence.

As the band members took their places, the excited buzzing of the crowd calmed into an expectant hush. Ryan let the anticipatory tension fill the silence for a few moments more before breaking it with an improvisatory keyboard solo. One of the many delightful aspects of Son Lux’s live stages was their improvised bits between pieces, which allow longtime listeners to find something new in familiar songs. Seeing the band lean into these unfiltered bits made the show feel like an epic garage jam session, albeit one with incredibly talented friends. The band must have shared this sentiment, sharing that “tonight the stage feels like an old friend, and so do you [all].”

“Vacancy” and “Plans We Made” epitomize their approach to creating music, in which they build lyrics and an auditory atmosphere around a specific sound of interest. The motif in “Plans We Made” is a quick upward glissando–the musical equivalent of a question mark–that complements the hesitation reflected in the lyrics, “I’m afraid to let you go.” This musical question mark serves as the primary anchor of the piece, as if referencing the quote from a Greek philosopher: “the only constant is change.”

As soon as the repeated guitar notes from “Easy” started, the crowd stirred in excitement, pulling out their phones to capture Son Lux’s most well-known song. The track was from their 2013 album Lanterns. The dark message and unnerving yet groovy instrumentation captured the attention of not only pop singer Lorde–who covered the song and collaborated with the band to release another version–but also millions of fans across the world, racking in over 50 million listens over various platforms.

Nappy Nina joined the band onstage to perform a groovy rap number sprinkled with Son Lux’s edgy, experimental streaks. The full force of the band’s sound was unleashed in their next track, “Last Light.” The increasingly frenzied bass drum and lyre-like guitar picking, along with the rapidly strobing lights, created a hypnotic effect, broken only at the end by vocals so distorted one could barely make out the lyrics. Despite the intensely flashing lights, the band’s show did not feel flashy or performative. Rather, the carefully choreographed lighting acted like traffic control signals, directing the audience’s attention amidst a barrage of complex, often syncopated rhythms and layered textures. The lighting also accentuated the already dramatic silences and textural contrasts within songs, one moment bathing the band in soft white light, the next filling the stage with laser-like red beams.

For their next piece, they invited Holland Andrews, an American vocalist, composer, and performance artist, to the stage to perform an original work called, “Transform Forever,” which is from the singer’s latest EP Forgettings. Andrews’ operatic background shone through in their effortless, crystal clear tonality, which is complemented by Lott’s shimmery synths. The lush composition, bird-like sound effects, and soft green lighting transport the listener out of the bustle of Los Angeles and into an enchanted forest.

The setlist consisted mostly of pieces from their Tomorrow’s I, II, and III albums, though the audience got a special treat at the end when the band performed songs from their latest project, the soundtrack to Everything Everywhere All at Once, an absurdist, genre-fusing film starring Michelle Yeoh.

Lott shared a bit about the band’s approach to creating the soundtrack and how they had originally intended to use songs from their discography and create a few new pieces for the film. However, they ended up creating a bunch of new songs and a few reimagined, “alternate universe” versions of existing songs. It was definitely much more work than they had signed up for, “but that’s what the movie deserved.” Fighting back tears, he introduced his next piece, “Come Recover,” a song that marks an important scene in the film, prefacing that the version he will be performing is a stripped-down, improvisatory rendition of the song. This rendition accentuated the inviting atmosphere of the song and enveloped the hall like a soft blanket.

Because the band was involved even before the film was fully cast, they only had the “crazy script” to work with, which they referenced to generate a slew of random crazy sounds and improvisations inspired by the script, finally landing on a cinematic piece, “Unbind,” that would evolve into the theme of the film. Featuring crushed guitar effects and sweeping strings, this last piece was a triumphant send-off to a magical Sunday evening concert. Unequivocal praise could be overheard as concertgoers streamed out of the concert hall.

Son Lux’s music is meant to be experienced live. At first listen, their discography can be disorienting, the multiple rhythmic layers creating an irregular pulse and the wavery voice-like synths lending a ghost-like aura to many of their tracks, but it all clicks into place when the band performs on stage. The spectacular lighting design and the band’s mesmerizing stage presence transport the audience into an otherworldly trance, where the musical elements that felt foreign outside of the concert hall suddenly fit together like three-dimensional puzzle pieces. Each of the band members seemed so lost in the music that it might have been possible they forgot about the existence of an audience, but it is this very “flow state” that drew in the audience’s attention like a magnet. If listening to their recordings is a cerebral experience, attending their concert is a surreal one, one where the precision of a classical concert and the unexpectedness of an improvised set come together to create music that speaks to the soul.

Click on the photo below to see all our photos from Son Lux’s concert in Los Angeles on Facebook! 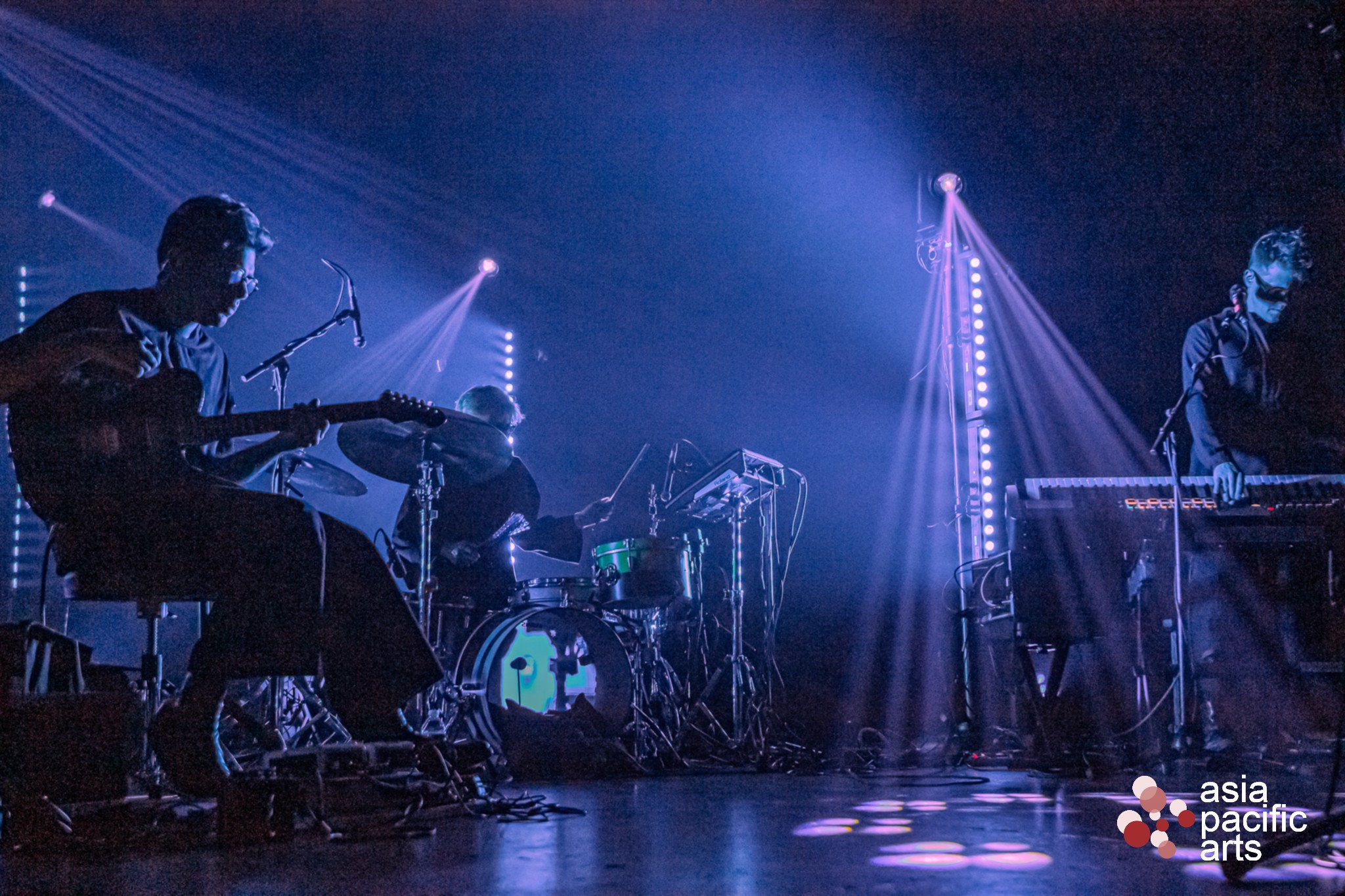