Performing their first ever stadium show in the U.S. on May 14th, TWICE greeted their fans, Once, at an encore performance of their second world tour, III. With an impressive three-hour setlist, the group performed fan favorite songs, prepared unit stages, and employed stage effects bigger than at any of their previous U.S. shows.

Following the same format as the other shows on the tour, TWICE performed in segments based on a different theme. Starting off with a VCR video of the members in colorful settings with “I” in the background to represent Once, the nine girls were lifted onto the stage. Fueled by the loud chants and cheers, TWICE started the show off with high energy tracks such as “Feel Special,” “Fancy,” and “Turn it Up.” The group graced the stage with all white outfits on, with little details and accessories to individualize each outfit for each member. Split between miniskirts, shorts, and long, flowy skirts, the outfits matched the upbeat mood of the music perfectly. Officially greeting Once, the group shared how happy and honored they were to be back in LA again before heading backstage for an outfit change.

From there, the second part of the show began with another VCR only with “II” in the background instead to represent TWICE themselves. Bathed in red lights to match the more mature atmosphere of the songs, the members of the group stepped on stage with hard-hitting choreography leading into their song, “Shot Clock.” The performance finished off with pyrotechnics and fireworks, making the group’s black and silver outfits sparkle under the bright lights. The dark and edgy outfits complemented the cooler songs from this section including, “I Can’t Stop Me,” “Get Loud,” and “Cry For Me.” 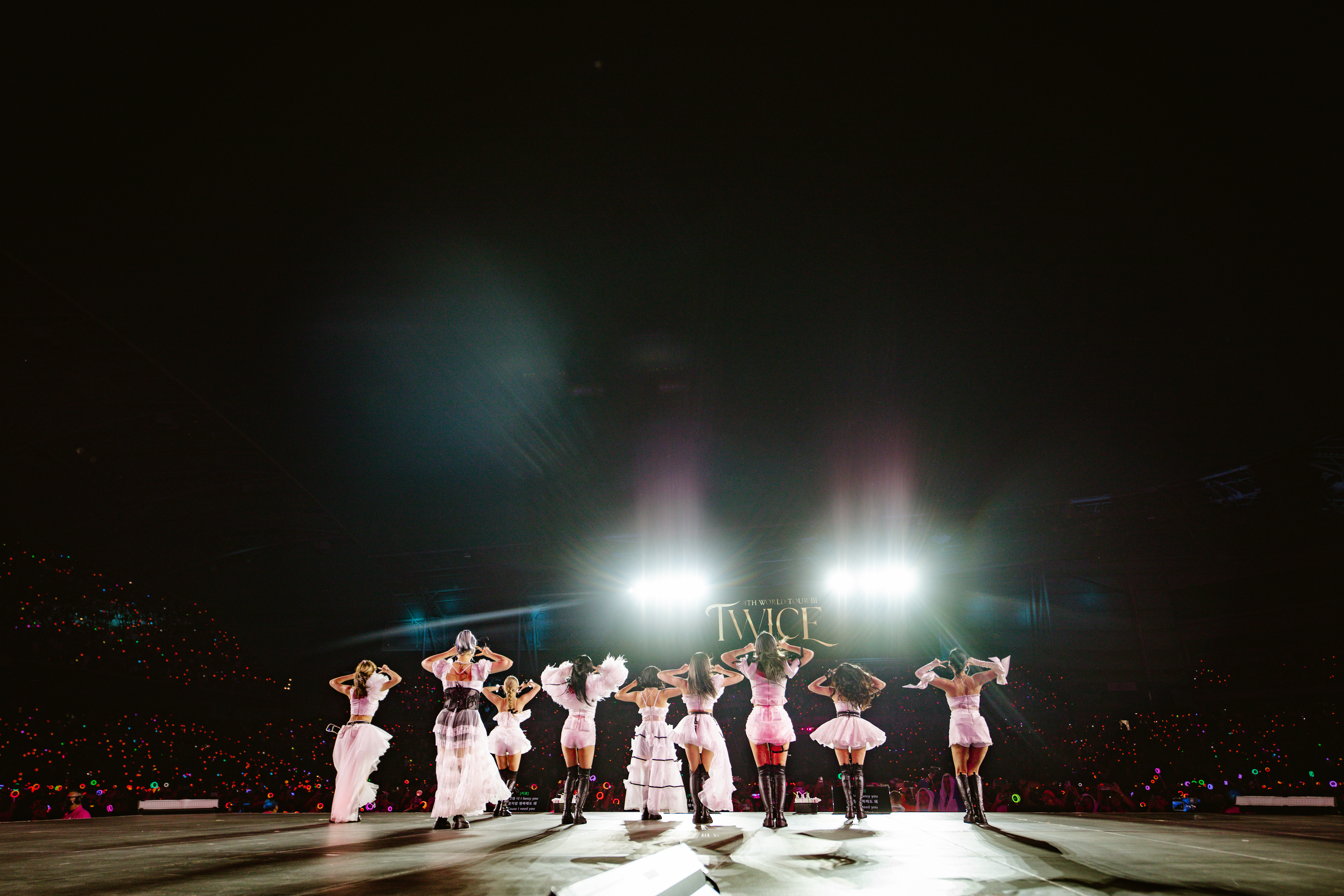 The second segment coming to a close meant another VCR, this time with the title of the tour, “III,” in the background. The members later explained this by defining “I” as representing Once’s love for TWICE, “II” as TWICE’s love for Once, and “III” being the reciprocal love coming together in perfect harmony. With such a meaningful sentiment, the third segment was filled with cute songs such as “Scientist,” “What Is Love,” “Dance the Night Away,” and “Heart Shaker.” Wearing a variety of satin dresses and two-piece sets in pastel colors, the girls looked sweet and adorable during these performances. TWICE also showed off their vocal skills with performances of slower ballad songs, “Cactus” and “Rewind,” calming things down just a little before picking up the energy once again.

The next VCR brought a challenge for Onces to dance along to “Scientist” to show their love for the group, and in return, TWICE prepared unit stages to show their love for Once. Dahyun, Jihyo, and Sana showed their cute charms while performing their catchy song, “Push & Pull,” Chaeyoung, Momo, and Nayeon blew the crowd away with their rapping and cool demeanor during “Hello,” and Jeongyeon, Mina, and Tzuyu showcased their vocals and dancing with their performance of “1, 3, 2.” Completing the challenge, the last mission was for TWICE and Once to work together to create their perfect harmony and dance along together to “The Feels” through one final VCR. Upon completion, the girls returned to the stage again as a full group and began their encore performance wearing a variety of their own tour merchandise. Spinning a wheel to decide the encore songs, the arrow landed on “Sunset,” “TT,” and “Touchdown.”

Sparks, confetti, smoke, and streamers were not enough for one of the biggest girl groups of today, so TWICE made sure to truly end the night with a bang. Adding one final surprise for fans, the girls performed “Dance the Night Away,” paired with a spectacular fireworks show that lit up the night sky. As the audience cheered and stared in awe, TWICE gathered together on the extended stage, arms around each other’s shoulders, and watched the fireworks together. As Chaeyoung mentioned the atmosphere felt like a drama, this ending truly felt like the perfect way to end the night. Dahyun, in particular, left some sweet parting words with the crowd: “Life brings tears, smiles and memories. The tears will dry, and the smiles will fade, but the memories will last forever. Today was a really happy memory, and no matter how much time passes, the happy memories will remain a treasure in our hearts.” 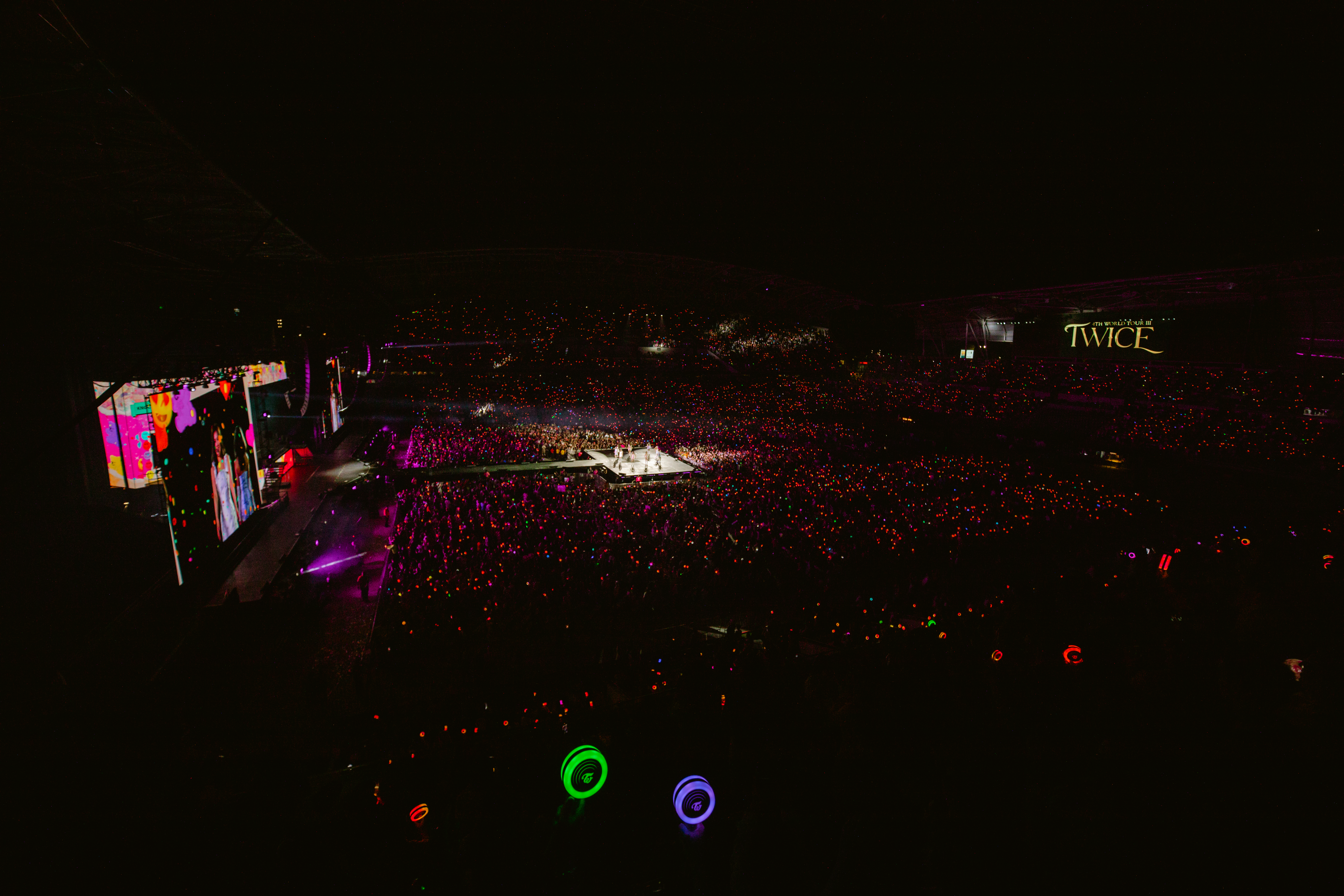