Bing & Ruth kicked off the evening with several expansive minimalist tracks. The band is a Brooklyn-based ambient group consisting of David Moore (piano), Jeremy Viner (clarinet), and Jeff Ratner (double bass). Shortly afterward, MONO set up their extensive pedalboards on stage. Guitarists Takaakira “Taka” Goto and Hideki “Yoda” Suematsu were seated on the outer edges of the stage, flanking bassist Tamaki Kunishi and drummer Dahm Majuri Cipolla. The setlist showcased some of the band’s most moving works from their latest two albums, Pilgrimage of the Soul and Nowhere, Now Here. The band barely made eye contact with the audience before starting their first piece, but don’t be fooled by their unassuming demeanor–they have an extensive 20-year touring history and have been heralded as one of the best live bands in existence. 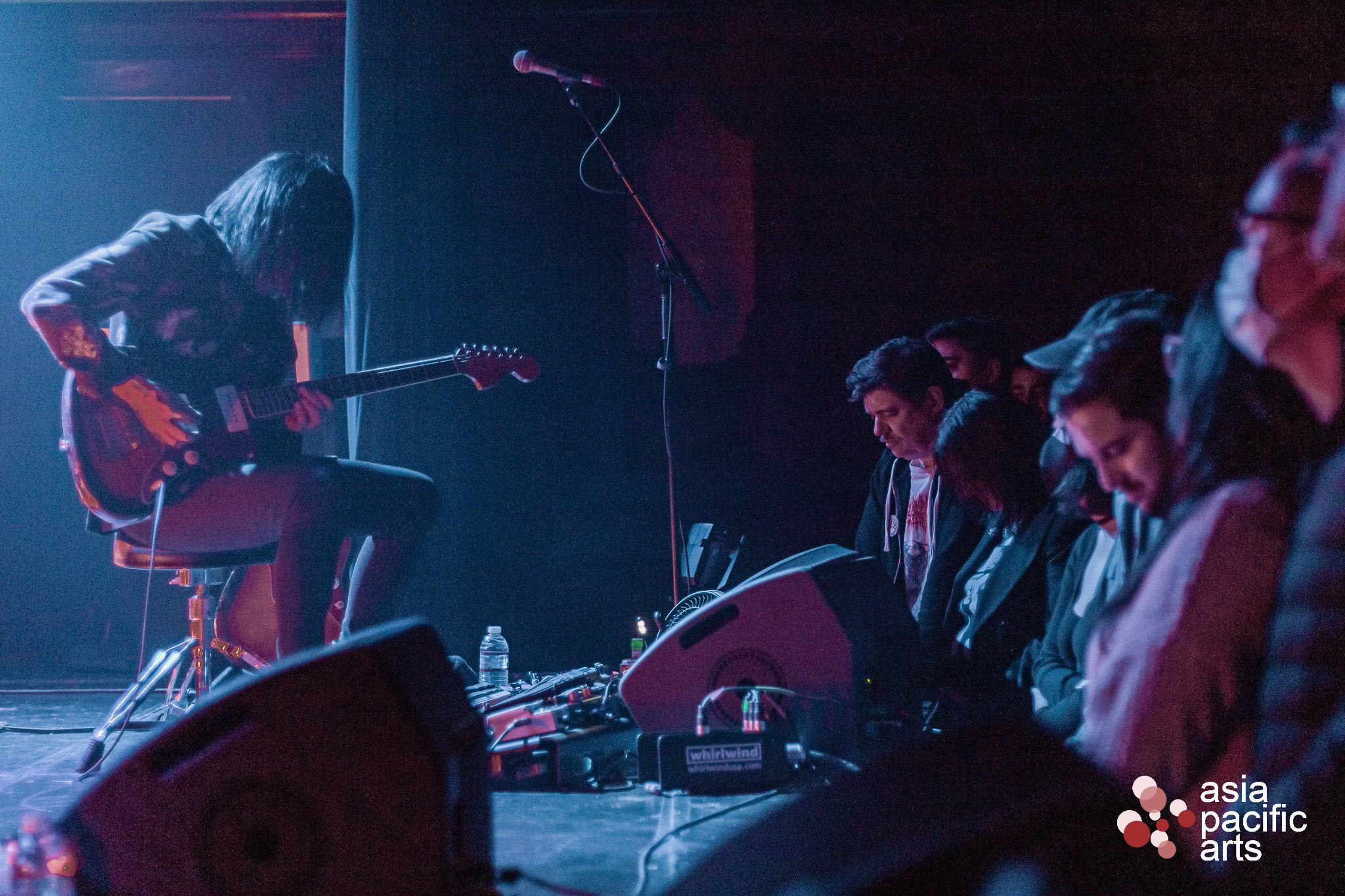 MONO’s first piece of the night, “Riptide,” opened with a barely audible string drone and a gentle guitar solo, but this calmness was short-lived. Abruptly, the band launched into a tour-de-force of sound and headbanging, a sonic and visual spectacle as the guitarists swung their long hair to the beat. The sudden transition wrenched the audience members out of their relaxed trance and into a sonic tidal wave.

Living up to their experimental origins, the band turns traditional musical conventions inside out. Unlike most styles of music, where the melody leads the listeners through the harmonic progressions, MONO’s unique fusion of post-rock and contemporary classical swaps the roles of the drums and the instruments: the drums propel the momentum forward between chord changes, and the simpler, repeated melodic features provide a steady heartbeat. The cymbals contribute an atmospheric quality to the music, and distinct rhythmic patterns serve as guideposts that mark transitions through well-defined musical sections.

MONO infuses classical elements into a characteristic post-rock musical framework. In this structural pattern, a guitar introduces a simple four-bar theme that persists throughout the piece, at times as the main melody, other times as a quiet melodic anchor. Throughout the course of the piece, everything ascends towards a glorious climax, from the dynamics and harmonic shape to intensity of guitar effects–crunchy distortion, gritty overdrive, reverb, tremolo picking–and rhythmic complexity. This all explodes at the end into a serene, shimmering expanse of near-pitchless noise and harmonics that soon fades away to nothingness. “Sorrow” follows this pattern closely, ending with glimmery repeated arpeggios that would not be out of place in an arcade game. This structure can be found across MONO’s discography because it effectively sweeps the listener on an emotionally charged, cathartic journey. But the band proves that they are by no means limited by this structure. “Halcyon (Beautiful Days)” diverges from this established pattern, with an introspective reprise that breaks up the relentless growth in intensity and allows the resurgent “wall of sound” to hit the listeners with even more emotional force.

Kunishi’s delicate glockenspiel solo that opened “Hold Infinity in the Palm of Your Hand” evokes the image of an infinitude of twinkling stars on a crisp evening. The piece is from their latest album, Pilgrimage of the Soul, and its title, like many others from that album, is drawn from William Blake’s poem Auguries of Innocence. The quote is a reminder that even the smallest and most mundane aspects of life are immeasurably profound, an apt descriptor for an evening that, despite only lasting two and a half hours, opened the portal into an eternal, revelatory sonic world.

At the end of the encore piece, “Ashes in the Snow,” the band members made their way offstage one by one. The last to leave the stage was Taka, founder and composer of the band. He shook his guitar upside down to amp up the fuzz and feedback distortion, which, like lingering memories of the show, persisted long after he disappeared from the stage.

For the uninitiated listener, the pieces may feel long and repetitive and the distorted sound quality overwhelming, but to fans of the genre, the long tracks allow for exploration of each instrumental layer, and the effects and distortions generate a luxurious, trance-like atmosphere. The beauty of MONO’s music is that it has aspects that appeal to a wide array of music listeners–theory nerds out there can enjoy dissecting the rhythmic easter eggs and instrumental layers, shoegaze fans might marvel at the artful pedalboard techniques, and those who are there to unwind after a long day will find themselves enveloped in a celestial soundscape.

The evening was more than just a concert, it was a transcendental, nearly spiritual experience. The show was a meditative space where you could sink into the moment, let go of anxieties and expectations, and trust the band to guide you through your own “pilgrimage of the soul.” There was a reverential air about the crowd–the chit-chat that normally goes unnoticed in concerts seemed as out of place as ringing cell phones during a sermon. At any one time, not more than a handful of audience members were video recording, with the majority preferring to enjoy the live performance, well, live. Many were lost in the hypnotic wall of sound, bobbing their heads to the pulse and barely noticing when people tried to weave their way in and out of the crowd.

It is rare for a band to deliver a concert that is simultaneously exhilarating and grounding, but MONO did so with incredible artistry and humility.

Click on the photo below to see all our photos from MONO’s concert in Los Angeles on Facebook! 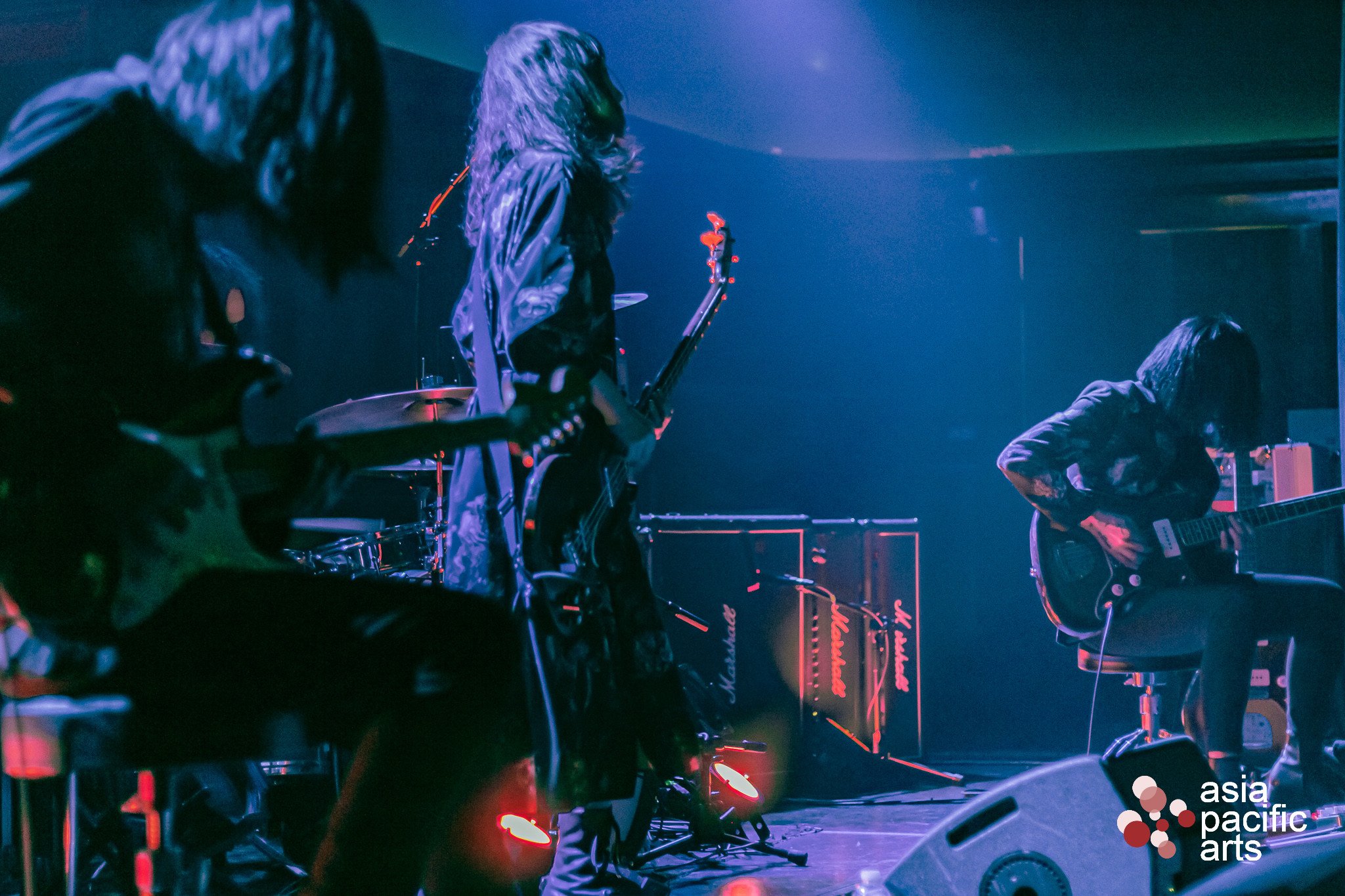