Singer-songwriters Beabadoobee and Luna Li performed a sold out show at The Glass House in Pomona, CA on April 25, following her Coachella debut. As the opener, Luna Li kicked off the night with her soft voice and relaxing music. Donning a red two-piece outfit, Luna’s set was paired with rainbow lights and an overall warm atmosphere. Along with her soothing vocals, the singer played guitar and violin throughout her set. With everyone feeling a bit of the Monday blues, Luna also included a brief segment of instrumental music, calling it her meditation segment. Encouraging the audience to close their eyes and hold hands with their friends, she calmed the audience with the sounds of her violin, reverberating through the venue. While the opening act is usually meant to pump up the crowd, Luna took a different approach, creating a serene atmosphere with songs such as “Cherry Pit” and “Afterglow.” Despite this difference, the crowd was still entranced, singing along and swaying to the rhythm of the music. Luna finished her set with Beabadoobee joining to sing “Silver Into Rain” together. 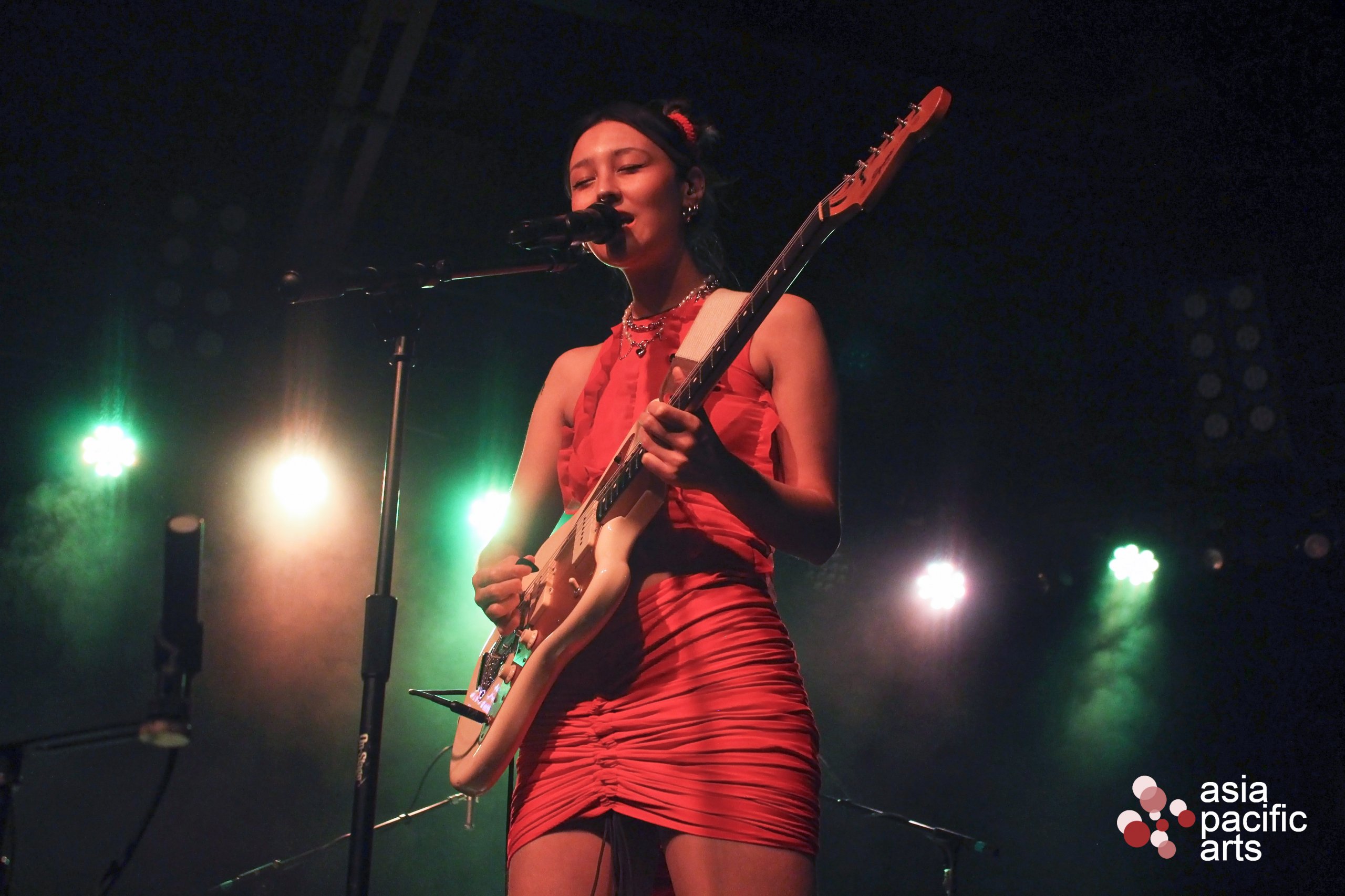 Following a quick intermission, Beabadoobee took the stage, receiving loud cheers from the audience. With an eclectic discography, Bea’s set had music suitable for everyone’s taste. While Luna Li’s set was warm and filled with rainbow colors, Beabadoobee’s stage was paired with darker stage lighting, either in a deep red or blue, which matched the tone of much of her music. The singer kicked off her set with “Worth It,” “Together,” and “Yoshimi, Forest, Magdalene,” all of which are songs off her debut album, Fake it Flowers.

Although she informed attendees that she wasn’t feeling very well, Beabadoobee still gave it her all on stage, only requesting that the audience sing along with her to help her. Switching between guitars for different songs, she performed crowd favorites like “She Plays Bass” and introduced her newly released track, “See You Soon.” Describing the song as one that makes her cry, the singer delivered an emotion-filled first live performance of the song, which was released the day of the concert. However, she quickly picked back up the mood with more crowd pleasers including, “Dye it Red,” “Back to Mars,” and “Talk.”

Beabadoobee only had a few scattered segments when the music paused to speak with her fans. It may not seem like there was much opportunity for her to show her personality outside of her performances, but just one quick glance was enough. With her own little red panda plushie on stage by the drumset, the singer also spotted a fan holding one in the crowd and asked to see it. After excitedly playing with it on stage for a little, she asked if she could keep the plushie, but reluctantly gave it back to the audience member as it was not meant to be a gift. Though short, she was able to show her silly and playful side through the sweet interaction.

Without any mention of it being the end of her show, Beabadoobee walked off the stage after an upbeat performance of “Last Day on Earth.” The crowd, knowing exactly what to do, began chanting her name and cheering as they stayed in place and waited for her to come back out. Bea shortly walked back on stage, only this time, with an acoustic guitar and without her band. “My voice is tired, so you all need to help me sing together,” she said, as she began to strum the beginning notes of her viral song, “Coffee.” As this song launched her to fame, it was only fitting that she ended her show with it. The crowd sang so loudly over Bea’s voice that she couldn’t stop smiling, truly enjoying the moment with her eyes closed. Taking a pause to just look into the audience after the song, her band rejoined her on stage for one final performance of “Cologne,” and the show was over. Making memories with fans until the very end, Beabadoobee walked along the edge of the stage greeting people, taking photos, and gathering an armful of gifts that included a beanie, plushies, and fresh flowers, before making her exit.

Click on the photo below to see all our photos from Beabadoobee’s concert in Pomona on Facebook! 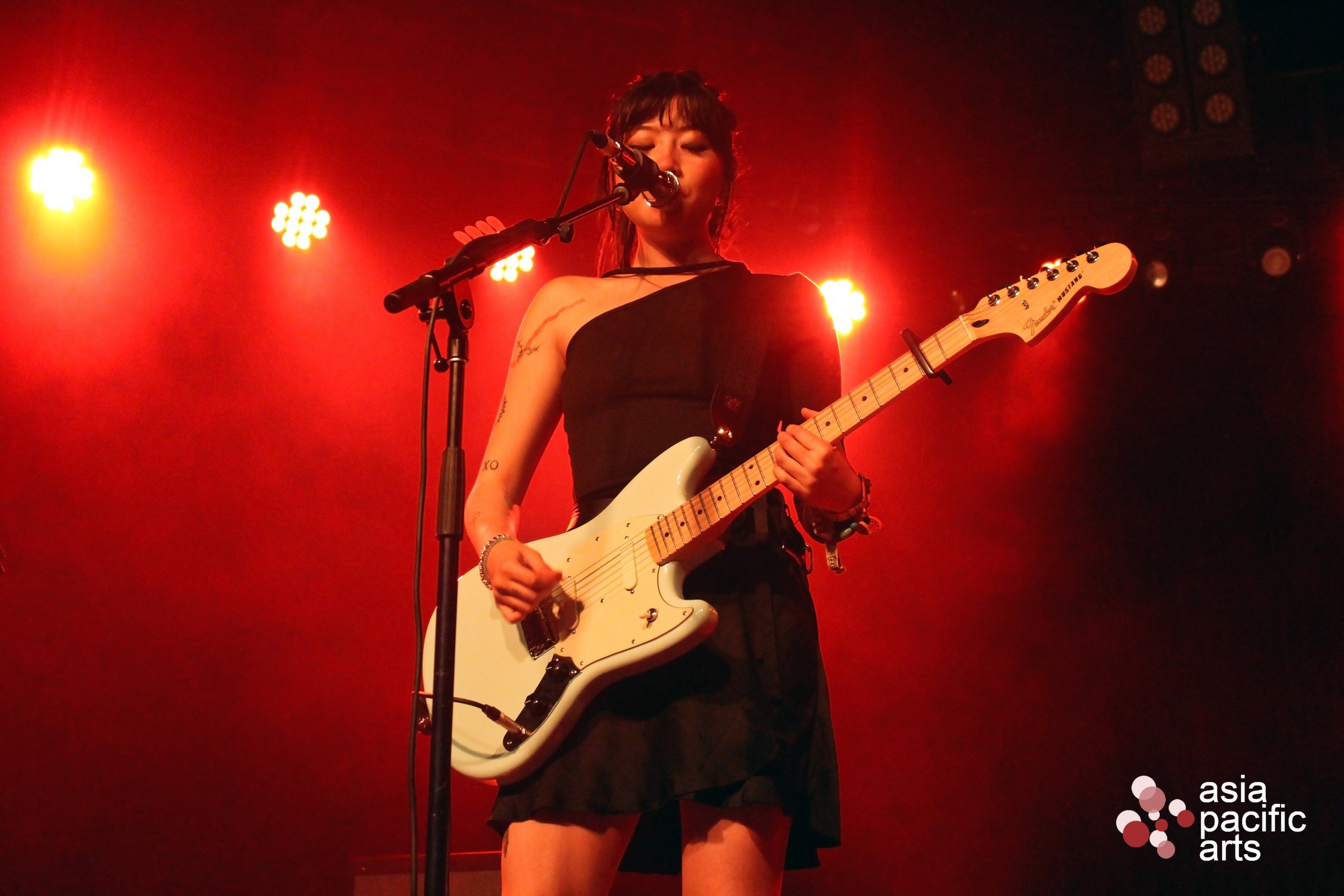