Angry Little Asian Girl: Moments With My Mother is the latest installment of Lela Lee’s Angry Little Asian Girl series. Following the titular angry little Asian girl and protagonist, Kim, Lee charts the interactions between Kim and her Korean mother in a hilarious and yet authentically empathetic way that helps audiences engage with the mother-daughter relationship in a new light.

From grocery shopping conflict to an Asian mother’s rage about being wasteful, Lee examines specific aspects of the Asian mother-daughter relationship. Along the way, she provides social commentary about the ironies and emotional challenges that are associated with being an angry Asian daughter.

Chronicling thoughts about Asian identity and community, Angry Little Asian Girl: Moments With My Mother is a brilliant piece of art and work that insightfully dives into the consciousness of a young Asian American girl and allows her to “talk back,” both in the comics and through this book itself.

APA spoke with Lela Lee about Angry Little Asian Girl: Moments With My Mother about her inspiration, Asian rage, and our Asian mothers. 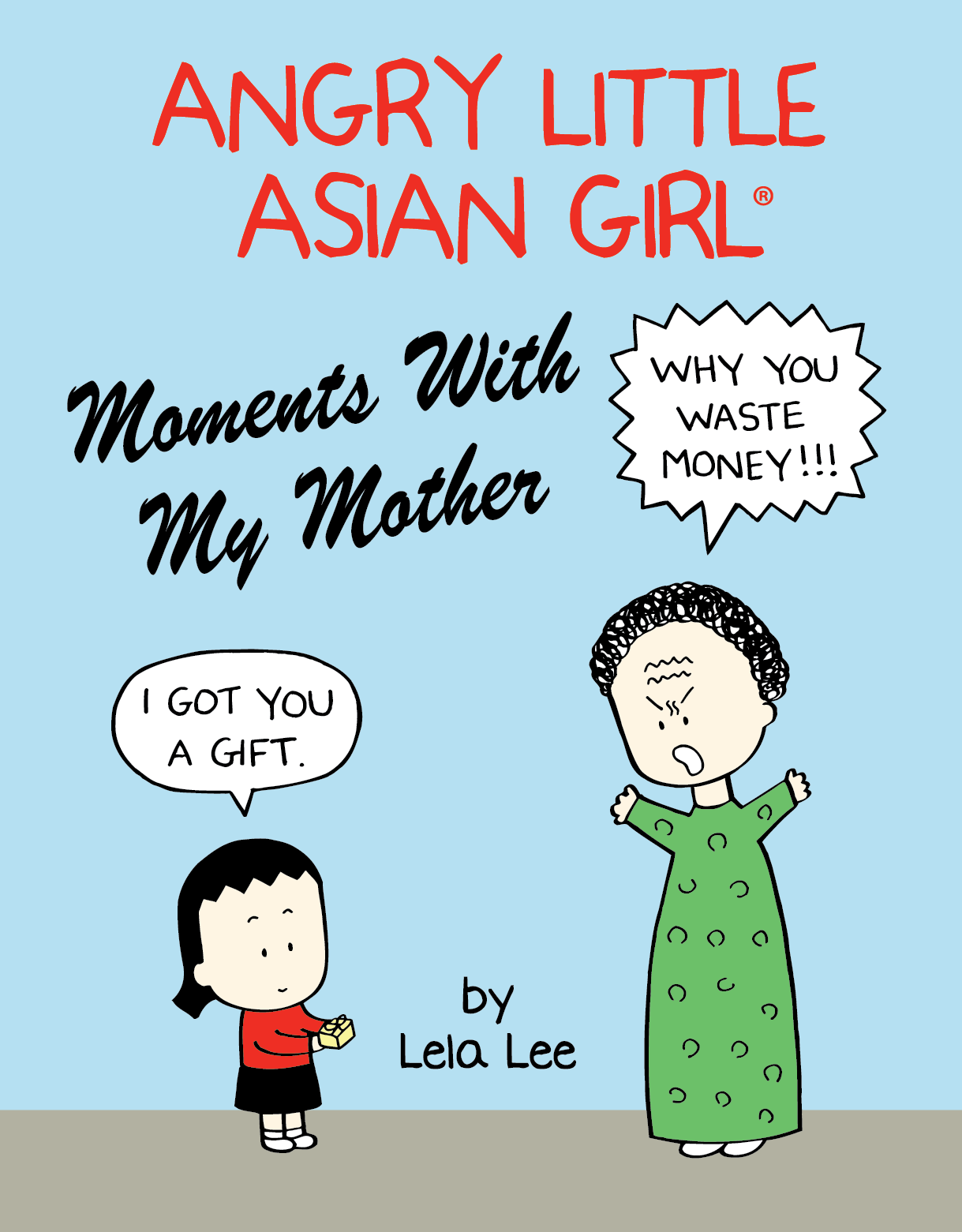 APA: First of all, I just wanted to say thank you for writing this book. I felt so seen, especially when you mentioned all of the different ways that Kim feels like her identity isn’t really understood by her mother. What inspired you to write this installment of ALAG, especially given the fact that this is your first original installment after twelve years?

Lee: I didn’t really set out to make this book. What happened was that I had published since 2006 an anthology, because I had my first son in 2007, in February … so my youngest son started school and then during COVID I was just cleaning and organizing. And I realized I had a lot of comics because I continually drew every week, so I started putting them in different folders. The “mom” one got really full because I just had a lot of rich material to draw from.

I also knew from interacting with my fan base that I have a lot of fans that resonate with that mother-daughter relationship. I think [the mother-daughter relationship] is something so specific that when I [first] started drawing those comics, I didn’t know if anyone would really get it, but as I was doing a lot of in-person pop up sales events before the pandemic, I got so much feedback.

I’d have these really great conversations with Asian American women, moms, and daughters, adults and kids who are just really appreciative of this really specific experience being put in these comics. So thank you for saying that you relate to it, because it really makes me feel seen too.

APA: There are a lot of generational and cultural clashes that occur between Kim and her mother, which ends up creating an emotional divide. I think it’s so creative that you illustrated that through the Asian mother’s interpretation of nursery rhymes. What was the process like writing those from the perspective of Kim’s mother?

Lee: My mom never read me nursery rhymes. It was just something that popped into my head … I don’t actually know when I drew my first nursery rhyme. I may have been a mom, like a new mom, around [that] time because I had a son who was a baby, and so I was given a lot of nursery rhyme books. And I just thought: “Oh gosh, these are cautionary tales.” It would be really funny if it was a cautionary tale from an immigrant mom. So I just did it in her voice, and I thought it was hilarious.

APA: One of the images that really stood out to me was the one in which you combined Asian American Heritage Month with Mental Health Month and channeled that into what an AAPI might be thinking. There’s definitely a lot to be said about the relevance of that visual to challenges of navigating Asian American identity. How do you think AAPI can reconcile this aspect of mental health with the Asian mother’s perspective and the lack of understanding that often accompanies it?

Lee: I don’t know that I have a full solution or answer to this because it’s so layered and so entrenched. Our mothers have also deeply experienced a lot of trauma and they are not equipped to really excavate those because their priorities are really just about survival. They know that they want their kids to do better than them, but then the obedience hierarchy in Asian families doesn’t allow for the children to be smarter than the parents.

So that is, I think, where a lot of the fighting comes from, is when the children who are supposed to be better than the parents, when that actually happens, [the parents] don’t like it and there’s a lot of cultural defenses that happen because they take dialogue as disrespect. I think it’s really super painful … [from] my personal experience, and most of my friends’ experiences, our Asian parents are super stubborn and they’re super hard because life made them have to be that way, and there’s also a lot of fear in what they don’t know.

They come to America for a better life, to have things improve, but their children are also improving and learning and it’s something they want, but that they [also] don’t want. I think it really makes them have knee-jerk reactions that actually just create a lot of pain in the family household.

APA: I notice that you connect all these struggles that Kim faces in the family with the larger struggles of patriarchy and how that all intersects within the Asian family household. How did you come to this decision of using the relationship between Kim and her mother to make a larger statement about social issues?

Lee: I had to analyze a lot of where an Asian mother’s rage comes from because they act really sweet and harmless in public, but they’re completely different to their children. So I had to wonder what was causing all of this. I actually ran into my friend … she’s Taiwanese and she was a parachute kid and she was just so on the straight and narrow. Really good girls, her and her sister, and her mom was never there … so I just asked her because I had been formulating what it was that was making them so angry.

I was like, “Do you think that our moms were so angry because they couldn’t choose who they got to marry, if they got to go to school, how many kids they had to have? Do you think they get angry once they become mothers that they become tiger moms because they finally have power over something? Because they’re not allowed to have power in regular society, in the regular family that they came from, but once they have children they have domain over their kids?” And my friend was like, “I think I’ll point to that.”

We’re really just sad for our moms because they are so angry about not having agency over their major life decisions — schooling, marriage, children  — that their anger is then passed on to their kids, and they don’t know that’s what’s making them angry, or maybe they do know that’s what’s making them angry, but what do they do with that knowledge? How do they reconcile that?

APA: Throughout the book, Kim expresses her internal rage about her mother to her therapist, her friends, and those around her, which I find really interesting because I think there’s often this idea that women, Asian women especially, have to suppress our rage. I’m wondering: do you view Kim’s expression of her frustrations to other people as a means of unleashing her rage or validating it, or a combination of both?

Lee: It’s a combination of both because it’s so human to just lose it, and it also is a reflection of how chronic and heavy the suppression is. Then the tantrum or the outburst has to be as big as the pressure and the burdens that she feels … I think being mad is just a human thing. I don’t know anyone who doesn’t get mad.

APA: At the end of the book, you end with the idea that Kim’s mother must love her very much. Would you describe this book as a love letter to your mother, even despite all the complicated dynamics of the mother-daughter relationship?

Lee: Yeah, because I don’t think Asian moms don’t have the tools to be any different. I think it really scares them to be different from what they have known. The language of Asian cultures is criticism … knowing that, you have to sometimes interpret or translate what [Asian moms] are saying.

Immigrant kids know that behind [their] criticism, [Asian moms] mean well, but [that criticism is] still so painful. So it just ends there because it’s just how [Asian moms] communicate.

APA: In 2017, Angry Little Girls Inc. relaunched as “Anger is a Gift.” In your words, why is anger a gift? What makes you angry today?

Lee: It’s so profound because I’d spent so many years being angry and I stumbled upon this quote [by Aristotle] that says anger is actually a gift … it made me really pause and consider how anger has served to sort of point at the things that need healing. So anger is an alarm, it’s like a boundary that’s being crossed and broken, because you need to say: “Hey, stop it.”

The same things that made me angry starting [out] are the same. Injustices, lying, unfair mistreatment … I think what it is is that females, girls, daughters are raised to be really nice and polite. It blunts their instincts to read a situation or person because you’re not allowed to say, “Oh, this guy’s totally creepy.” Our politeness paralyzes us in these situations … [then] I’m like: “Why did I let someone take advantage of me?” It’s because I’m supposed to be nice and I have that ingrained in me, and so I took it for longer than I should have, I didn’t speak up when I should have. So sometimes the anger is also at myself.

Lela Lee will be at the Los Angeles Times Festival of Books, hosted at the University of Southern California, on April 23rd and April 24th. For more information on the author, visit her website at lelalee.com.