Skip to Content
Home Music An “Above Ordinary” Night with AOMG

Ready for a night full of Korean hip hop and R&B, fans of the music label AOMG gathered at The Vermont Hollywood on a chilly Friday night to see artists Coogie, DeVita, DJ Wegun, sogumm, and Woo take the stage for their first U.S. tour.

The show kicked off with DJ Wegun, who set the tone for the night with his mix of various AOMG artists. Featuring both long-time and fresh label mates in his set, the audience was able to enjoy hearing songs from Jay Park, Simon Dominic, Hoody, Lee Hi, and more, despite them not being physically in attendance. With flashing lights that probably should have come with an epilepsy warning and bone-vibrating bass, DJ Wegun turned the small theater into a house party.

Switching up the tone, the next artist up was singer-songwriter sogumm, who hyped up the crowd in her own way. Bathed in eerie green lighting, she appeared onstage barefoot in her classic blazer and long skirt and transported listeners to what felt like an old eighties movie with her smooth and almost haunting vocals. Enchanting listeners, she finished her set with a more upbeat song, “My Love,” before DeVita took the stage.

DeVita started her set with “Evita!” and immediately began interacting with the crowd by greeting fans and grabbing phones from the audience. Swaying her hips in low rise jeans and a cropped tee, DeVita brought the nineties hip hop vibes, taking the audience yet again to another time period. Her soulful voice was matched with brighter lights than the previous two sets, and fans were finally able to get a clear look at one of the performers’ faces. DeVita performed some of her most popular songs, including “Cheese in the Trap” and “Bonnie and Clyde,” before passing on the mic to the first rapper of the night, Coogie.

When Coogie stepped onto the stage, screams could be heard loud and clear. With a full thirty-minute set, there was never a dull moment during the rapper’s first ever performance in Los Angeles. Songs like “In My Cup” and “Good Night” had the crowd rapping and dancing along to the heavy beats and smooth flow. Despite his focus on delivering a flawless performance, Coogie didn’t forget to acknowledge the crowd either. Taking phones, high-fiving audience members, and even jumping into the crowd briefly, Coogie did a wonderful job keeping fans engaged throughout his whole set.

Wrapping up the solo stages was Woo, who was welcomed with inarguably the loudest cheers. Jumping straight into it, Woo dashed out after a long instrumental introduction and began rapping at the very edge of the stage, getting as close to the crowd as he could. Everyone in the audience went wild, rapping and shouting along to tracks like “R.I.P” and “Devil,” while Woo jumped. The red stage lighting matched his passionate stage presence and was perfect for immersing the fans in his deep voice and strong rap delivery. Fans were also thrilled each time the rapper pointed his mic to the crowd for fans to continue singing, while he cheered them on as he knelt on the stage. Performing a whopping eleven songs, Woo kept up his energy all the way through, and ended with “We Are.”

As the show winded down and the crowd slowly began to make their way out, the AOMG crew surprised fans with a special encore performance, in which all of the artists came out to perform two songs together. Spending almost the entire time taking selfies with fans and even signing autographs at the edge of the stage, Coogie, DeVita, DJ Wegun, sogumm, and Woo ended the night with countless memories.

Click on the photo below to see all our photos from the AOMG’s “Above Ordinary” tour in Los Angeles on Facebook! 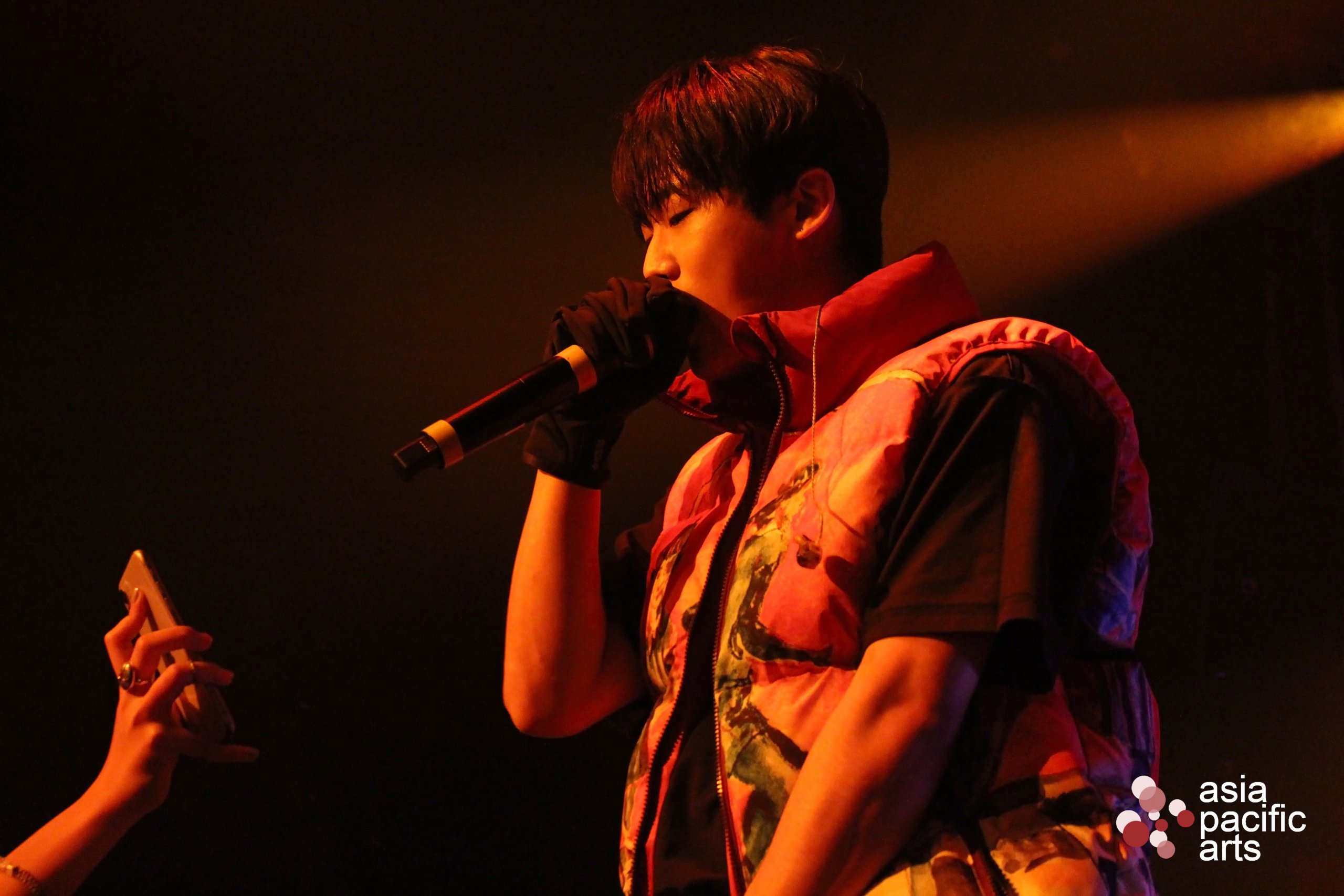