EDM artists JVNA, MVSE, and AWAKEND turned up the heat with their bass-boosted sets on February 27th, 2022 at The Regency Ballroom in San Francisco, the third stop of JVNA’s Hope in Chaos tour.  This is JVNA’s first tour after releasing her debut album, Hope in Chaos, which takes listeners on an emotional journey from despair into hope.

MVSE, pronounced “muse,” kicked off the evening with a mix of high-energy tracks, mesmerizing melodic dubstep and future bass numbers, and remixes of pop favorites. The crowd couldn’t resist singing along with MVSE’s versions of songs by artists like The Killers, Zedd, and Oliva Rodrigo. To warm the audience up for JVNA, he also played an unreleased remix of her new song, “Dystopia.”

Despite running into a few technical difficulties, AWAKEND (Michael Lang) kept the energy going strong, playing tracks infused with driving dubstep beats with breathtaking, trance and future bass lines. The remixes of “Story of My Life” and “Another Way” take listeners on a rollercoaster ride of euphoria through pulsing dubstep buildups and dramatic decompressed drops.

By the time JVNA took the stage, the crowd had grown almost twofold, jumping energetically to the beat and filling the venue with raucous whoops and cheers. She opened her set with “Ghost,” an emotive track that deals with the uncertainty and heartbreak of early love. Despite her petite stature, JVNA’s stage presence filled the concert hall as she alternated between playing the piano, working the turntable, and striding to the edge of the stage to sing directly in front of the audience. Her airy, dreamlike vocals took center stage in “Crazy” and “At Least it Was Fun,” two original songs that capture the crushing longing and nostalgia that come with a breakup.

After the first few songs, the stage lights dimmed momentarily, leaving only two house lights and colorful LED gloves and ribbons from the audience. This was an apt visual representation of the storyline of her album, of solidarity and hope emerging from periods of darkness and hardship. This liminal moment was quickly overtaken by pulsing strobe lights as JVNA continued her set with crowd-rousing selections like “Money” by Lisa from Blackpink, “Where You Are,” and “Best for You” by Trivecta (ft. Selah Ford).

Another track performed from her debut album is “Dystopia,” a particularly catchy yet poignant track. The lyrics lament the unrealistic expectations propagated through social media, while at the same time, the hook is as addictive as an Instagram feed. With the backdrop of a fittingly glitchy screen, JVNA knelt on the stage, gazing at the audience adoringly as she poured her heart into the vocal melody.

During “Fly,” the audience shone their camera flashlights at the stage, creating a sparkling sea of light that JVNA’s voice could soar over. “Just wanna do what I feel is right / Cause I just wanna fly tonight,” she sang, giving permission to herself and to the crowd to let go of their worries, to “finally surrender” into the moment. She then invited the audience to become part of the performance, one moment beckoning the audience to sing along to Shouse’s “Love Tonight” like a well-rehearsed choir, getting the crowd to sway energetically to the beat.

Most of her original songs showcased her cinematic future bass sound and dreamy vocals, which she complemented tracks incorporating influences from dubstep, K-pop, big room, electropop, and psy-trance in the setlist.

One of the most moving tracks in the set was “First Storm”, which featured ethereal bells and haunting vocals that build into a relentless bass anthem layered with heavily compressed synths. This track is a testament to the dynamic and stylistic range that makes JVNA’s music so compelling. Expansive instrumental verses create space for the drops to hit listeners with full force, and the deeply personal lyrics pack another emotional punch.

JVNA also flaunted her mixing prowess by creating unexpected mashups, mixing an upbeat remix of “Dystopia” into P!nk’s “So What” and fusing Blackpink’s “How You Like That” with G Jones’s “In Your Head (RL Grime remix)”.

Even before she left the stage, the crowd was eager for an encore, which she happily obliged, playing “I’m With You,” a  plaintive song inspired by her father’s passing. The show closed with JVNA singing, “Come with me / stay with me,” fitting for a night that everyone wished could have never ended. This show was her exploration of integrating new genres while still retaining her cinematic music style, and it was well received, judging by the crowd’s buzzing excitement even after the subwoofers died down.

Click on the photo below to see all our photos from JVNA’s 2022 “Hope and Chaos” Tour in SF on Facebook! 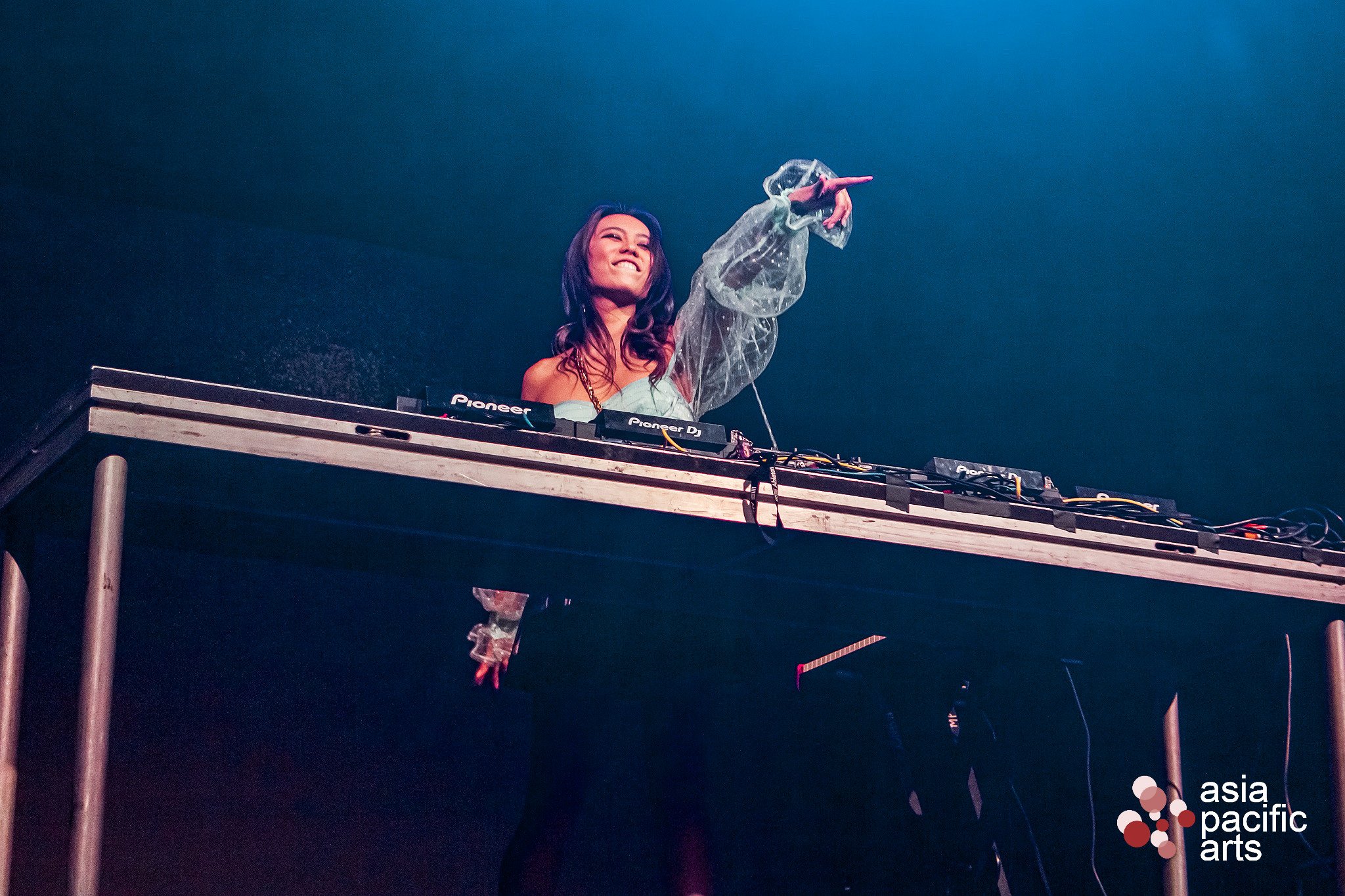