Three Months is a coming-of-age film that follows Caleb (Troye Sivan) who learns that he has been exposed to HIV following a one night stand. But when he rushes to a clinic to get tested, he is told it’ll take three months to get his results. As he anxiously counts down the days, he finds a way to get through the wait with his best friend Dara (Brianne Tju) and his new crush Estha (Viveik Kalra). APA chatted with the cast to explore the making of Three Months.

APA: As “Three Months” is a coming-of-age film that explores the obstacle course that is self-love and self-discovery, how did you get into your characters?

Brianne Tju: It’s so exciting and heartwarming for me to get an audition, read a script and find that the character is written to be Asian American. Overall, the story is just so wonderful, educational, enlightening and funny. To be part of that was my first piece of excitement, and then creating my character with Jared Frieder, the director, was an incredible experience. Surprisingly, I found that I related to Dara so much, as well as Caleb, a young person learning to love themselves and learning the value of themselves in relationships and that they deserve to have the other person reciprocate the same amount of love and care for them. I think learning self worth is really important, and that’s something I’m still figuring out now. So I hope this film can help people with that journey.

Troye Sivan: Yeah, totally. For me, I had it pretty easy because Jared wrote the screenplay, which is loosely based on his experience. I knew him socially before, and we met at like a couple of parties and stuff. He has such a specific cadence to his voice and specific sense of humor that when I was reading the script, I could hear his voice in my head. For me, the character kind of fell into place almost immediately. From there, it was just about working with him to kind of incorporate some of myself into the character. I was really lucky to have real life Caleb pretty much right in front of me.

Viveik Kalra: For me, everything goes off of Caleb. It was really interesting for me to come onto set and play a character that is more reactive and passive. It was fun to dive into that and be young and lovey dovey. 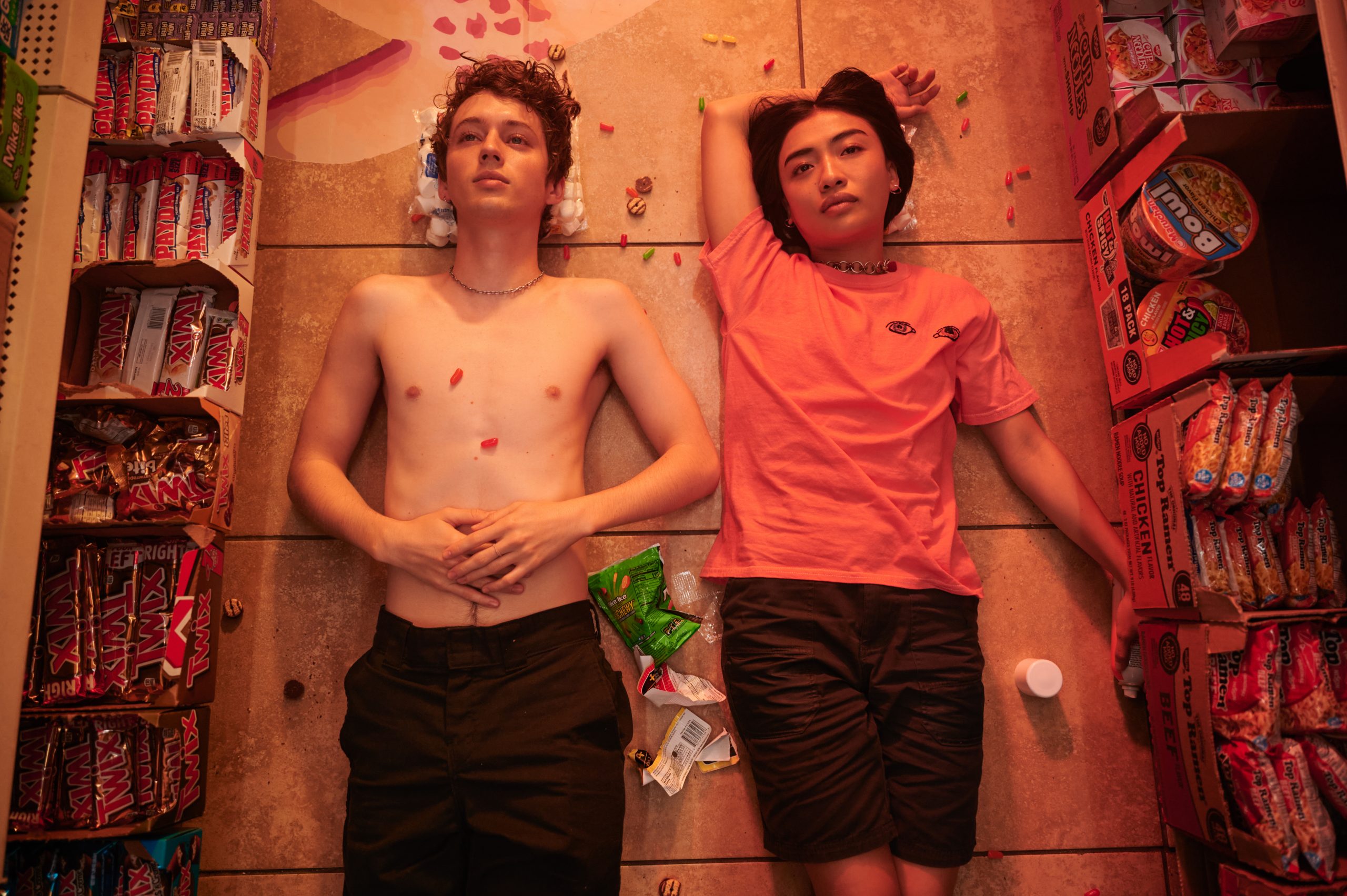 APA: Waiting to find out about a life-changing thing is probably one of the most difficult experiences. Navigating this challenge, Caleb has a deep friendship with Dara and a budding romance with Estha. How was it working onset together and building these relationships together?

Tju: We began shooting in March 2020, which is also when we’re hit with the pandemic along with the rest of the world. And so, we, in parallel to this script, we’re kind of put into this period of waiting, unknown and uncertainty, which came with its anxieties and fears. It was just crazy that this was happening, especially in terms of the health conditions while we were filming this movie, which helped us relate to the script on a much deeper level. We also had to rely on one another. We would check in with each other during our six-month waiting period before we started shooting again. I also stayed at Troye’s house. I actually think that helped me a lot because I just felt like I understood him. We needed each other and it bonded us. I think it strengthened the relationship of our characters on screen.

Sivan: There was already the sense of this movie being made with a level of personal care that is very, very, very rare. Jared wrote the screenplay based on his own experience nine years ago, and it took ages to find a home for it. We really cared about the movie, and for us to go through this massive, traumatic experience together, it kind of made everything a bit more effortless when it came time to film, in a weird way. I was so grateful to have the film as a kind of safe place while everything else felt like it was completely falling apart. It was a really special experience that I think we’ve all been through together, and I think you can even feel that onscreen.

Kalra: As for Estha’s relationship with Caleb, they’re two different people in the same situation. In the same way, my real-life Britishness is starkly different from Troye’s Aussie/Americanness. I feel bad for saying this, but I wasn’t sure if he was doing an American accent because I almost thought his accent was already American. I feel like the Australian must have neutralized somewhere. 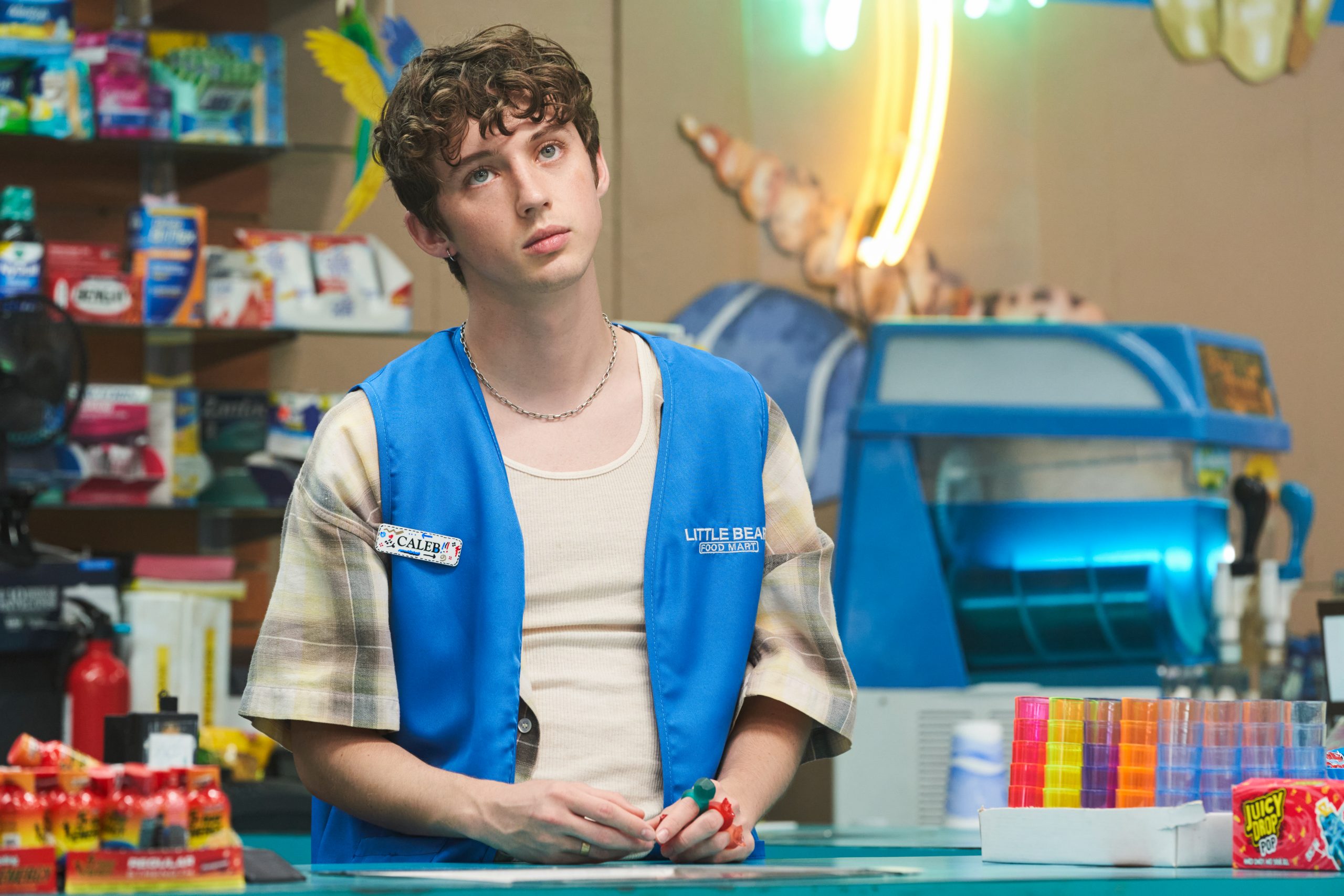 APA: There are so many funny little quirks in this film. I really love that so much of it takes place in a food mart called “Little Bear,” but it’s aquatic-themed and filled with fish decorations. You filmed a very memorable party scene in this food mart, which felt like such a fun take to such a quintessential moment in coming-of-age films. How was filming this scene?

Sivan: Unfortunately, a lot of my memories of this film are kind of tainted by COVID. I do remember there was a day at the mini mart, where the producers were like “Guys, the world is crazy, but we are not shutting down.” And then literally the next day, they were like “Guys, we are shutting down.” When we filmed the party scene, it was such a moment of escape. I was like “Who the fuck knows what’s going to happen tomorrow? Let’s enjoy this and have a good time.” We really did and it was one of the highlights of filming for me.

Tju: I adore that scene. It’s one of my favorite scenes, especially because I know the experience we had filming it was so lovely. It was really quick. We really were running out of time in the day. We were just throwing out these ideas. All of a sudden, I had a hot dog in one hand and I was dunking it in vanilla icing. The next moment, we’re like “Let’s do a shot with Pepto Bismol.” We also came up with the choreography. It was very collaborative, fun and vibrant. I feel like in that scene, we capture the friendship between Caleb and Dara that bleeds through the rest of the movie.

APA: As for Caleb’s dynamic with Estha, there’s this lovely awkward tension and dialogue between your characters as you explore your relationship. Can you talk a bit about filming those scenes and whether there was any ad libbing?

Kalra: I didn’t think the romance was awkward at all. [laughs] Yeah, it is this sort of incredibly awkward, very young and new moment. It was funny to navigate. A lot of it was straight from the script. There is this one scene that didn’t make it into the film, where I was just doing improv with Troye. It’d be hilarious if they had this scene somewhere because I just wouldn’t stop talking and I didn’t let Troye get a word in. But ultimately, it was all Jared and his writing.