Character Media brings back the Unforgettable Gala for its 19th run on December 11th. This year, the event celebrates Asian American talent at the Beverly Hilton with a special 2021 theme — “RISE.”

With an influx of anti-Asian hate crimes during and partially due to the global pandemic, the AAPI community has had to face countless hardships in the past few years. Despite this, the community has fought back and protected its people. Because of this strength and endurance, this year’s Unforgettable Gala is here to recognize and commemorate, so that these instances of rising to the various challenges do not go forgotten.

Aside from the meaningful theme of the year, the dress code was the usual black tie attire, with cultural touches appreciated. While RISE would have been the perfect theme for those walking the red carpet to flaunt their cultural pieces, most attendees opted for the classic black tuxedos and evening dresses. Thankfully, there were still several attendees who opted to wear clothing representative of their culture and heritage. Below is the list of winners honored at the Unforgettable Gala, as well as APA writer Ephney’s choices for Best Dressed in Cultural Flair and Black Tie:

The best dressed of the night was inarguably Maitreyi Ramakrishnan. With a beautiful, well-fitting piece made with what seems to be Zari fabrics, the actress’ dress was the perfect mix of traditional clothing with a modern flair.

Rather than a normal suit jacket, Kung Fu star Eddie Liu chose one that held the pattern of a traditional Changshan. Additionally, the Changshan suit jacket had a wonderful mix of colors with blue, purple, black and gold that worked harmoniously together.

Another beautiful piece was worn by Dianne Doan, who walked the red carpet with fiancé Manny Jacinto. The actress donned a beautiful gold silk Áo Dài, which is a traditional Vietnamese dress typically worn by women on formal occasions.

Filipino American film producer Jeremiah Abraham rounds out this list for the night, with a beautiful outfit representing his Filipino heritage. Abraham described his outfit as a Mindanao tribal look, based on traditional clothing from the Mindanao Island in the Philippines.

Donning a velvet jacket in a deep purple, Alex Shibutani’s outfit was classy and chic, tied together with a bow tie. Although the outfit was very simple, the change in texture with the velvet piece really made the whole outfit pop. The Olympic athlete arrived for the night with his sister and skating partner Maia Shibutani.

Similarly to Alex Shibutani, actress Peyton Elizabeth Lee also opted to go with a velvet piece. In a form-fitting royal blue dress, the young actress’ outfit was well put together, with a fun pop of pink eyeshadow that matched her pink heels.

Winning Breakout in Film and being part of the Vanguard winning film Shang-Chi and the Legend of the Ten Rings, it’s unsurprising that everyone’s eyes were on Simu Liu this year. Symbolizing luck, joy, and happiness, there was no better color that Liu could have chosen for the night as he walked the red carpet in his matte red tuxedo. The suit fit perfectly with his frame and his personality, as he smiled and greeted everyone warmly.

Last, but certainly not least, was Jessica Henwick’s beautiful white gown. Reminiscent of Zendaya’s trending leather dress from the Dune red carpet at the Venice Film Festival, Henwick’s dress was skin tight yet ruched in all the right places. Paired with a slicked back hairstyle and eye-catching gold and white drape earrings, the outfit screamed simple yet exquisite.

While not a culturally inspired or black tie outfit, Ludi Lin’s red carpet wear is also well worth mentioning. Donning the uniform of a waiter with “SUPPORT ASIAN SMALL BUSINESS” and “吃了吗？” (“Did you eat yet?” in Simplified Chinese) written on the apron, the simple piece was perfect for RISE’s theme.

Another one worth mentioning is MC Jin, who brought along his wife and son, Chance. While everyone else walking the red carpet had their masks off for their photo ops, Jin decided to keep his son Chance’s mask on the entire time. Even after a few requests for Chance’s mask to come off even just for one photo, Jin stood firm in his denial. Instead of the artist’s attire, MC Jin’s actions and demeanor perfectly embodied the event’s theme about protecting the community. 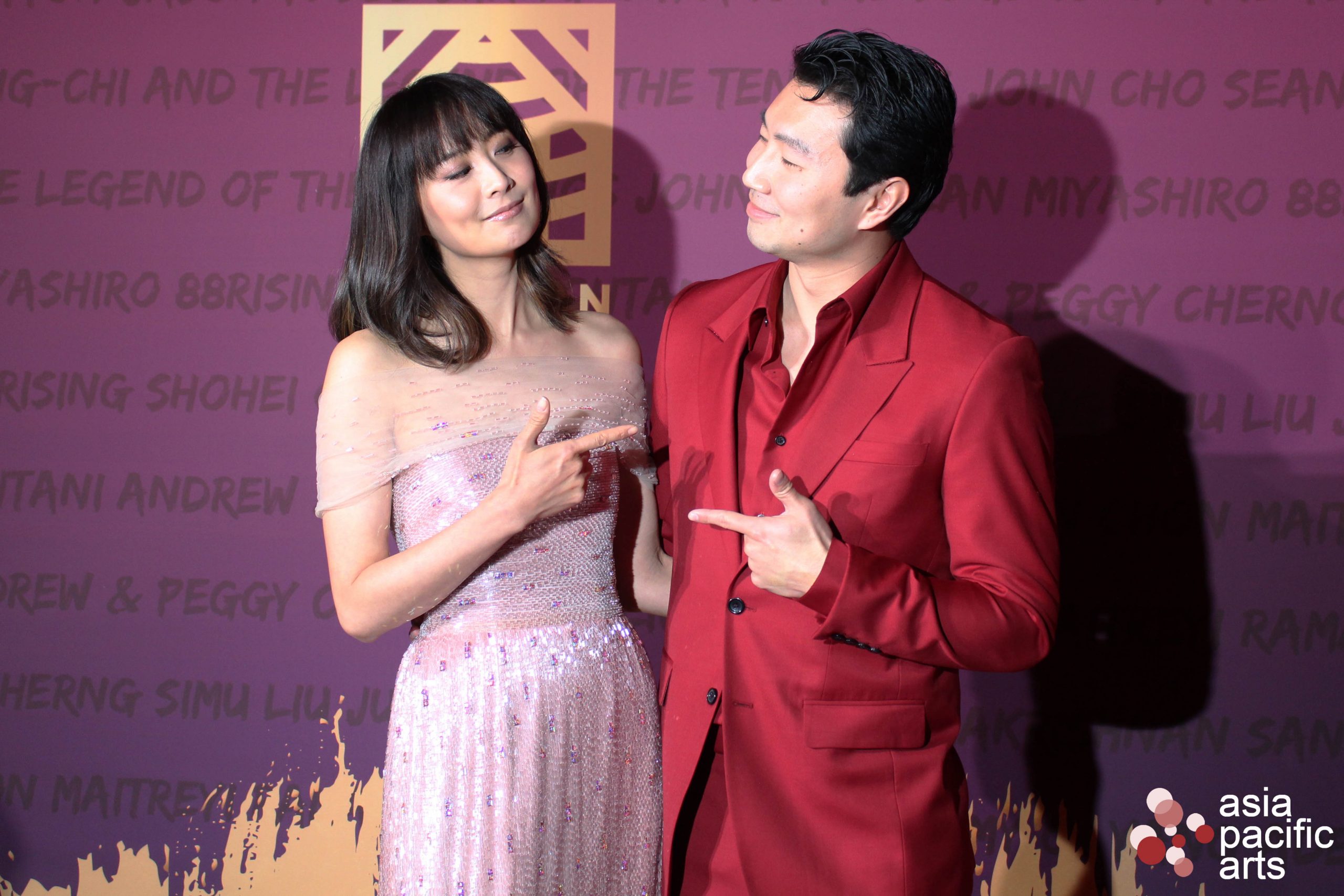