After two postponements, the FF7 Remake Orchestra Concert made an impact in Los Angeles. Without anime or comic conventions for nearly two years, cosplayers and fans of all kinds were hungry to show off their love for the beloved franchise. Hundreds of fans showed up at the Microsoft Theater well before doors opened to mingle and gather with others. During the intermission, audience members with both meticulous and casual cosplays took group photos in the halls.

The concert featured the aptly named Shinra Symphony Orchestra led by award-winning conductor, Arnie Roth. Roth has been conducting the concert tours of Final Fantasy music for nearly 15 years. Also, audience members were greeted with the surprise appearance of Yosh, the original singer for the FF7 Remake theme song. 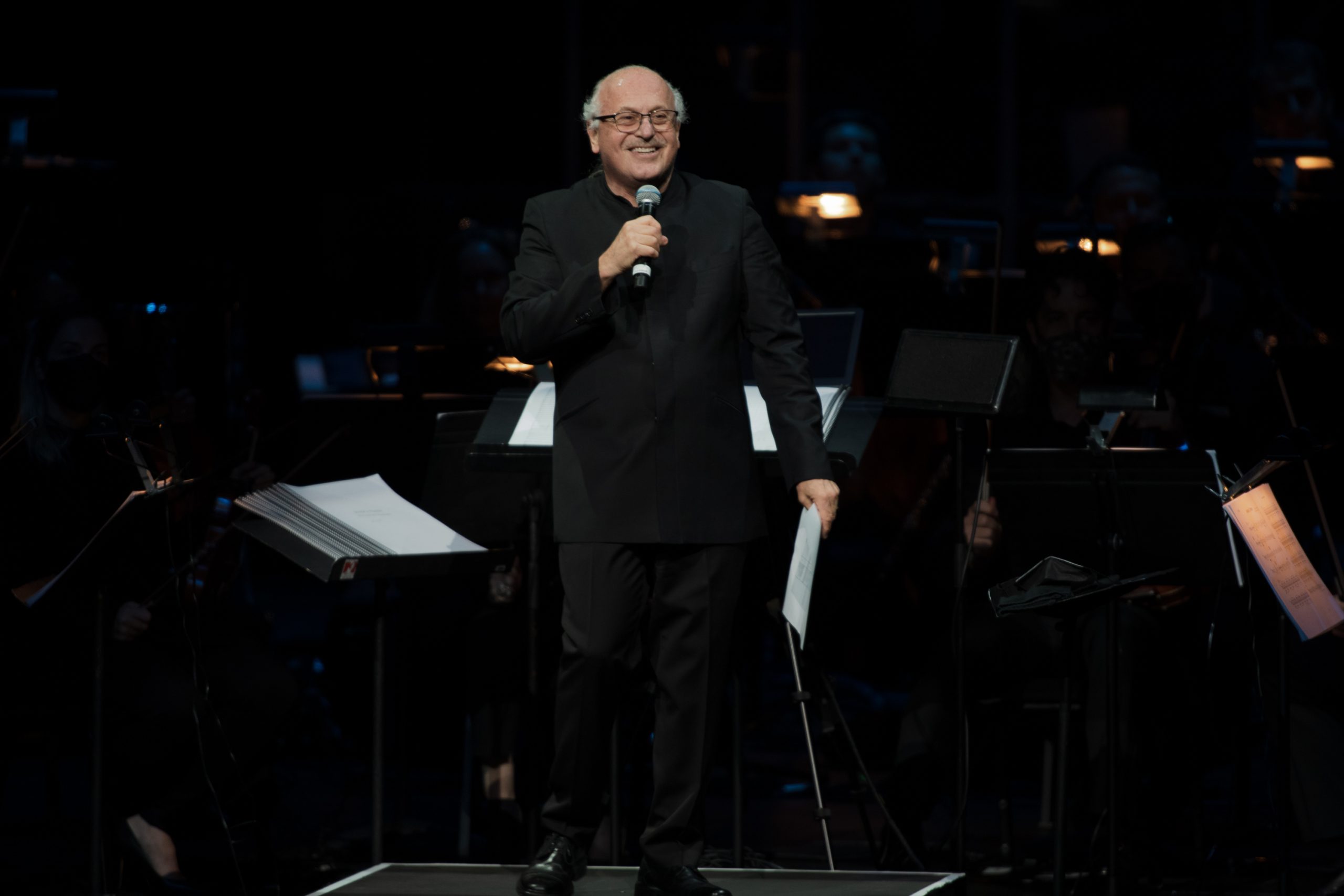 Opening the concert with The Prelude and Midgar, the audience saw various familiar faces and places as the orchestra rose to full swing. Mirroring everything from the game introduction to the urgency of the protagonists reaching the Mako Reactor, the music picked up its tempo to get to the heart of the beginning of the game: Flowers Blooming in the Church. As Cloud awoke in the Sector 5 slums church, the crowd cheered at the sight of Aerith.

But what stole the show in the first half, before the intermission, was the orchestral and vocal performance of Stand Up. The Honeybee Inn song’s live performance had the audience laughing, and clapping, all while dancing in their seats. If COVID restrictions weren’t in place, people would’ve danced on top of their seats as Cloud transformed into his female alter-ego onscreen. In addition to the various emotional video montages of Cloud and Tifa, Cloud and Aerith, and all three together having a grand time, Roth closed off the first half with Let the Battles Begin. The orchestra put on quite a show, going from a cabaret-like theme to one for the gym mini-games.

Several videos with other members of the Final Fantasy 7 Remake team were interspersed before intermission. It showed just how much care they took to adjust the game’s beloved music from a home entertainment game to a grand orchestra arrangement. Orchestral arrangements of pop songs are often very repetitive and is consistent of three rotating chords. But that’s not exactly fun for professional musicians to play nor is it pleasant to hear after a minute. Luckily, that wasn’t the case here; no one was bored at the collection of music chosen for this live arrangement. 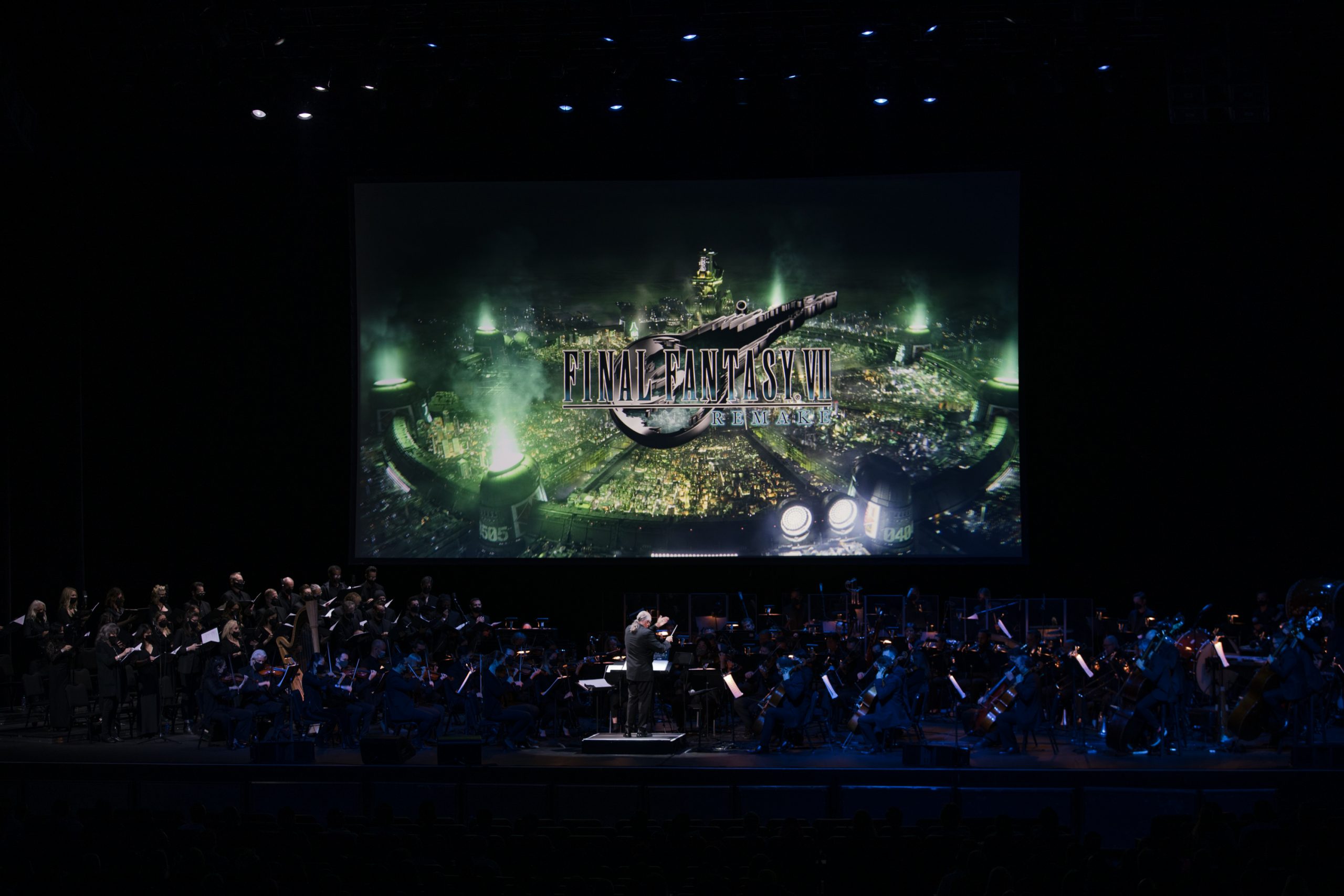 As the second half the concert began, it occurred to me that the concert wouldn’t be a Final Fantasy concert without promotion of its latest release. Yuffie jumped on screen as a new player alongside Descendant of Shinobi to promote Final Fantasy 7 Remake Intergrade, which came out earlier this year. But the standout among the set list in this section was the inclusion of lesser-known themes. Aerith vs. Tifa fans have had their arguments for over two decades, but the Remake made way for a third best girl: Jessie. Roth had stated the team has always wanted to include Jessie’s Theme, and the new game gave them the opportunity to do just that.

Halfway through the second half of the concert, everyone had the same question on their mind: Where is One-Winged Angel? Sephiroth was a transient figure that appeared and disappeared throughout each montage. Much like his actual in-game appearances, he popped in and out as the choir sang a short part of his theme during Arbiter of Fate – Singularity to give the crowd a taste. Rest assured, there was no way the concert would end without both his and Aerith’s theme. However, the latter songs in the setlist focused mainly on the villain’s suite of themes. Cloud, and his allies slashed their way through the inner workings of Shinra Inc. while the villains made their debut.

When the concert came to a close, Yosh appeared onstage to perform the ending theme, Hollow, to mark the “end.” His powerful vocals left fans quaking as they watched the end staff credit roll, making it feel like a Hollywood movie ending. It’s very likely that the delays in the world tour gave Square Enix the extra time to create a themed credit roll rather than a standard list of names on a black screen. 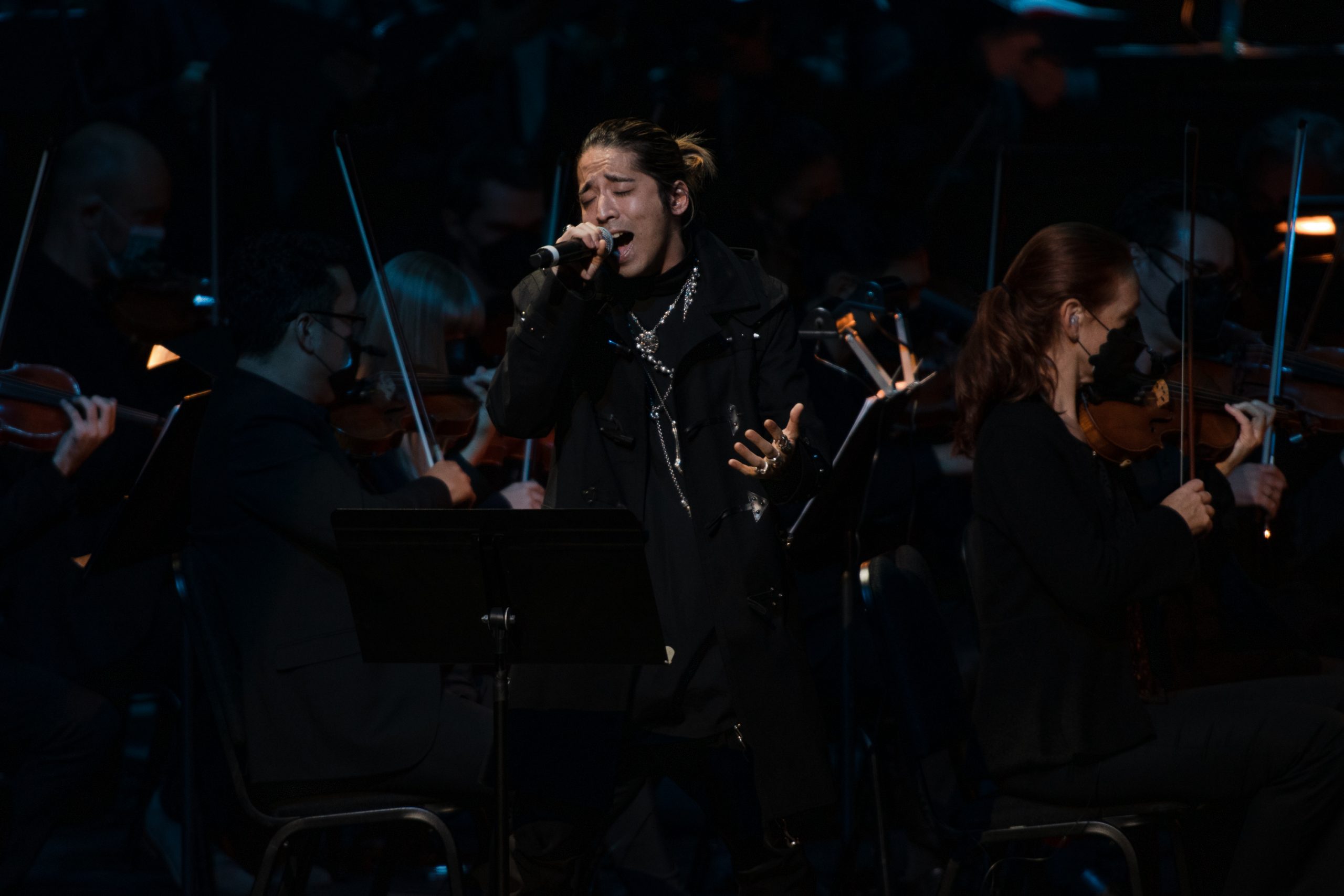 Once Roth and Yosh exited stage right, the crowd clapped and called for an encore, waiting with bated breath for the two fan favorite songs. Almost immediately, Roth returned onstage along with an onscreen transition to the church as Aerith’s theme plays in the background. The crowd mellowed down and let out a sigh as they bathed in the sounds of light strings while the sad theme came to an end.

And then, like a bellow from the depths below, the first whistling combination of violins, violas, and cellos came crashing down. The house lights and stage lights turned blood red as Sephiroth rose onscreen in front of a fiery background. Despite the many, many, MANY times I’ve heard One-Winged Angel, it never gets old. The change in lighting instantly enveloped the crowd in a sense of fire and chaos, making it impossible not to chant “Sephiroth” alongside the choir.

With that, the highly anticipated orchestral concert came to a fantastic end. For those who couldn’t grab memorabilia or want a second viewing, there are several more shows within the United States before the orchestra begins its tour in Europe. Definitely worth leaving home for, if you can!