Samjin Company English Class, directed by Lee Jong-pil, is a comedic drama featured in the 2021 New York Asian Film Festival. The captivating film follows three unfulfilled office assistants, Lee Ja-Young (Ko Ah-Sung), Jung Yoo-Na (Esom), and Sim Bo-Ram (Park Hye-Soo), who come across dishonest environmental reporting at Samjin Corporation. While studying English in the hopes of landing a promotion, the three women stumble, often awkwardly, into the role of whistleblowers and risk not only their promotion, but also their jobs. The film transports viewers to the mid-1990s with its light sepia toning, a dance-pop soundtrack, and a set replete with clunky old-school desktop computers and pay phones. The set is clearly dated, but the film explores issues as relevant today as they were 25 years ago, ranging from the search for fulfillment at work and oppressive workplace gender norms to the sacrifices that come with “doing the right thing,” interspersing social commentary throughout the dialogue and plot.

The opening scenes introduce the main characters walking (or, in Bo-Ram’s case, face-planting) on a busy street on their way to work, the first of multiple scenes at this location. Lee Ja-Young is a dedicated office employee, and despite being consigned to serving coffee and performing other menial tasks, she thinks Samjin Company is “the best company in the world” and believes that she has fulfilled her childhood dream of becoming a career woman. As she unearths more about the toxic waste cover-up that ends up poisoning water resources and the villagers who drink it, her blind faith in the company wavers and is transformed into a personal mission to righting the wrongs committed by the firm. Some of the most poignant scenes in the film involve Ja-Young witnessing the horrific human impacts of the toxic discharge and being wracked by the guilt of her own involvement in the settlement contract. At the end, when asked why she is so dedicated to Samjin, Ja-Young shares that she wants to know that her company is making people’s lives better. “Otherwise”, she asks, “what are we working for? Simply to survive?” While she doesn’t have Bo-Ram’s genius math abilities or Yoo-Na’s intimidating composure, her strong moral compass, iron will, and empathy make her a protagonist viewers wholeheartedly root for. 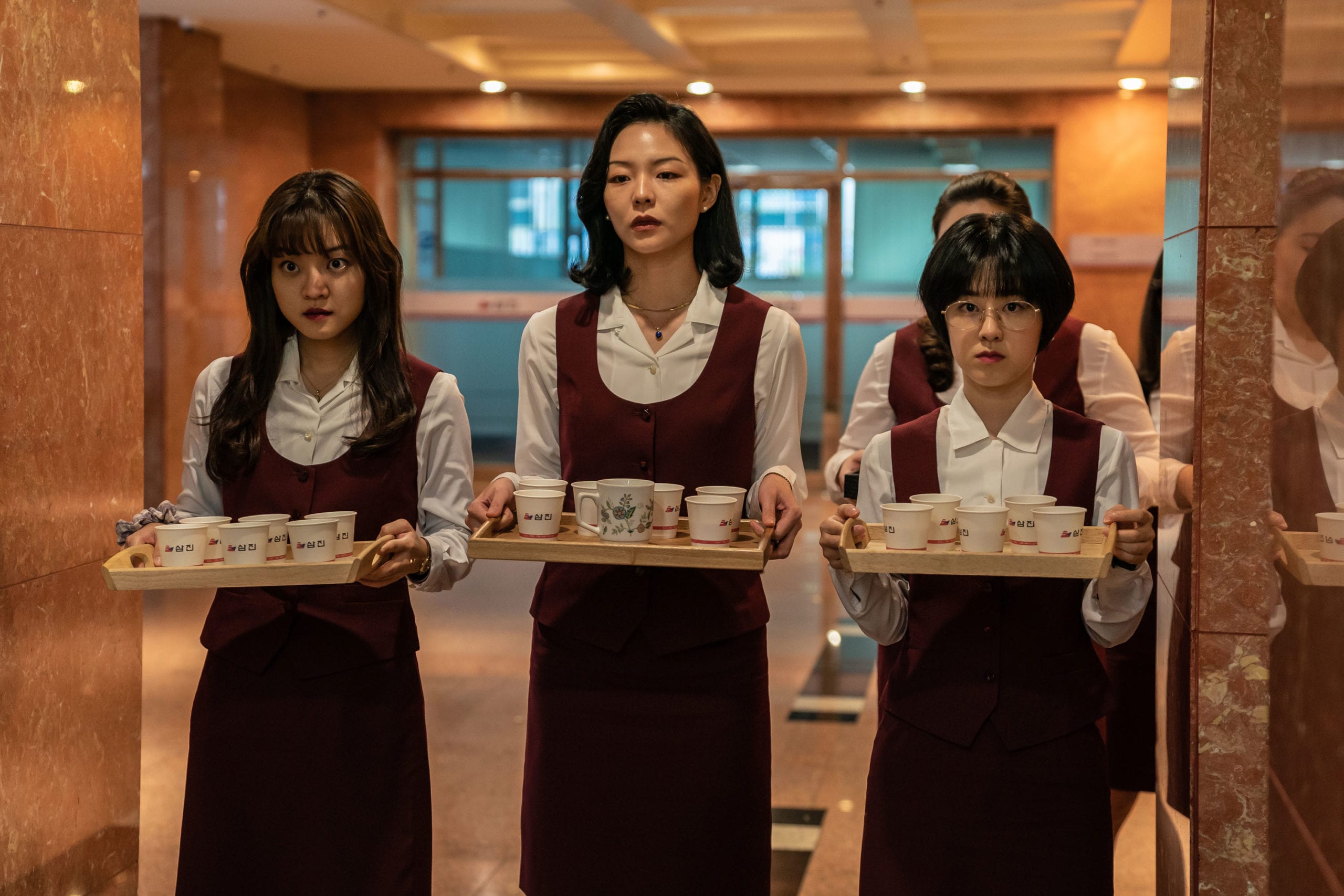 For our main characters, learning English is not only their ticket to professional growth, but also a means for them to stand up for themselves and for what they believe in. Their classmates in the English course become allies in their quest for truth, and their progress in learning the language mirrors their progress in solving the case. However, English, and more broadly, Western influence, is also portrayed as a harbinger of corruption through the forged environmental report supposedly from California and the coercive business strategy masterminded by an American venture.

In many ways, the film proves that “life at work is a series of betrayals.” The company’s coverup is a betrayal of the villagers’ trust, and the whistleblowers are acting against their company’s best interest while, at the same time, feeling backstabbed by their closest coworkers. Even the office assistants’ extremely limited opportunities for career growth is a form of betrayal; despite having spent many years at the company and having talents beyond their current role, the assistants are relegated to menial administrative tasks simply because they did not attend college. In the corporate world, there are no allegiances, only cost-benefit analyses. The film juxtaposes the cold business logic of suits and firm handshakes with its stark human toll, most evidently in the expressions of the villagers when they realize the lies they were told about their water.

The film also explores the theme of invisibility, sometimes literally. For example in the quasi-espionage scenes where the main characters snoop around to find clues and narrowly avoid getting ousted. In one scene, the camera focuses on the shoes, trash cans, and coffee that the assistants provide instead of the assistants themselves, demonstrating how the work of the female office assistants are critical to daily office operations, yet are unseen and unappreciated by the other employees. On the other hand, this quasi-invisibility sometimes serves our main characters well, allowing them access to information and locations without being suspected.

While the main characters are well developed and consistent, the film does not afford this luxury to the side characters and the ending of the plot, instead relying on tropes familiar to any K-drama fan. There’s the sudden diagnosis of a terminal illness, the stereotypical caricature of the heartless Western businessman in CEO, Billy Park (David Lee McInnis), the overdramatized standoff, and the oversimplified resolution. However, the excellent execution of the comedic bits more than make up for these broad brushstrokes. The scene where the whole office partakes in mandatory stretching exercises resembling middle-school dance moves is pure comedic gold, made funnier by its stark contrast with the typically serious, no-nonsense workplace environment. 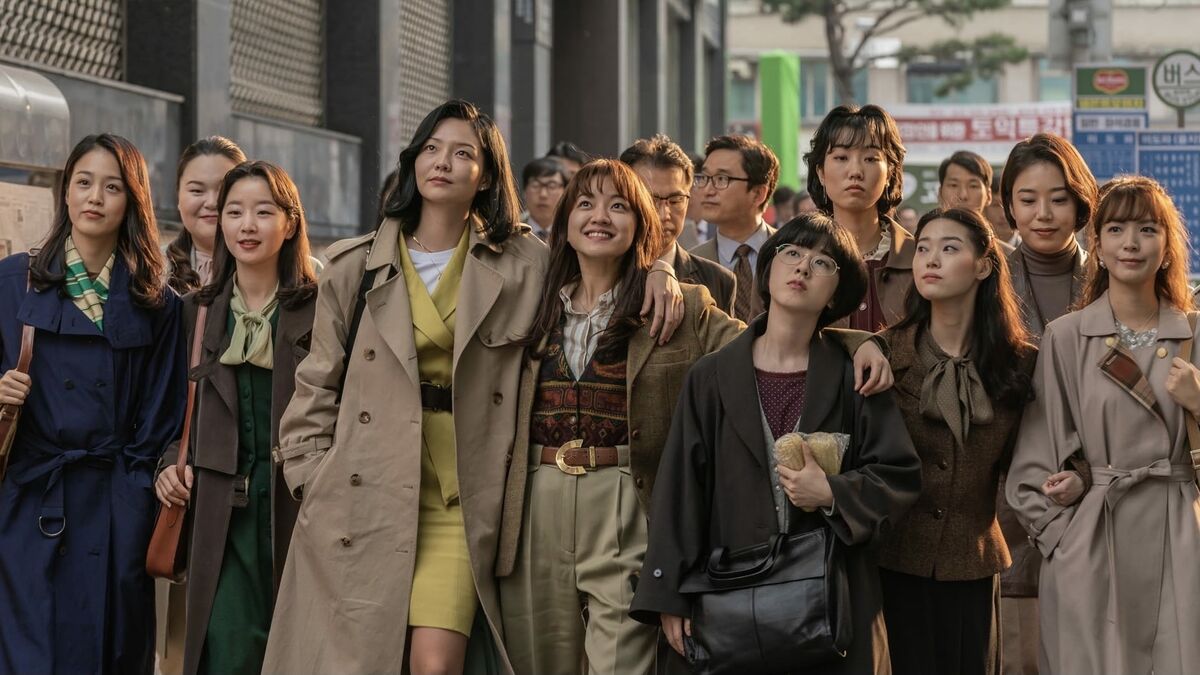 Towards the end, the film returns to the busy street from the opening shot. While this location represents how easily each person blends in with the crowd, the movie subverts this metaphor, instead showing that it only takes a single person to stand up to the crowd and make real changes. The central message is summarized in a poster that Ja-Young sees on the street: “Rather than adjusting to an unreasonable world, one must join forces with others to change the world.” It is a story of empowerment, of the imperative that each “tiny, tiny person” person to do the right thing, but at the same time, it is a warning that there are powerful forces colluding to create an “unreasonable world” where human life is secondary to corporate success.