The Misfits follows a ragtag bunch of good-willed misfits who recruit renowned international thief, Richard Pace (Pierce Brosnan), to infiltrate a maximum-security prison and pull off a major gold heist in order to block funding of global terrorist groups. Among the group is Wick (Mike Angelo), an explosives expert with a goofy side who brings fire power to the crew.

APA sat down with Mike to chat about adding his own flare to Wick, cultivating his do-it-yourself attitude toward work and life, and creating his own future projects.

APA: Congratulations on your debut Hollywood film! Can you share how you selected “The Misfits” as your first project?

Angelo: I personally like action films. When this movie came to me and I saw the beautiful cast, I figured why not? It’s my first English-speaking movie and I was really nervous about it.

APA: How would you describe your character, Wick?

Angelo: Well, Wick is who I would say crazy. He’s into blowing things up, yet he’s always smiling, goofing around and dancing. He’s quite similar to myself.

APA: Was the character originally written that way or were you able to shape his character?

Angelo: He wasn’t originally as funny, but I did some homework on Wick. When I was in my hotel room and reading the script, I thought about how I could make him different, more interesting.

Renny [the director] is always open to ideas, so I often brought up ideas to him. There’s this one scene toward the end of the movie, where we’re all walking in slow motion and I’m the only one who tripped. I get back up like nothing happened and we all stay straight faced. That was a funny scene I came up with that had me laughing when I watched it. 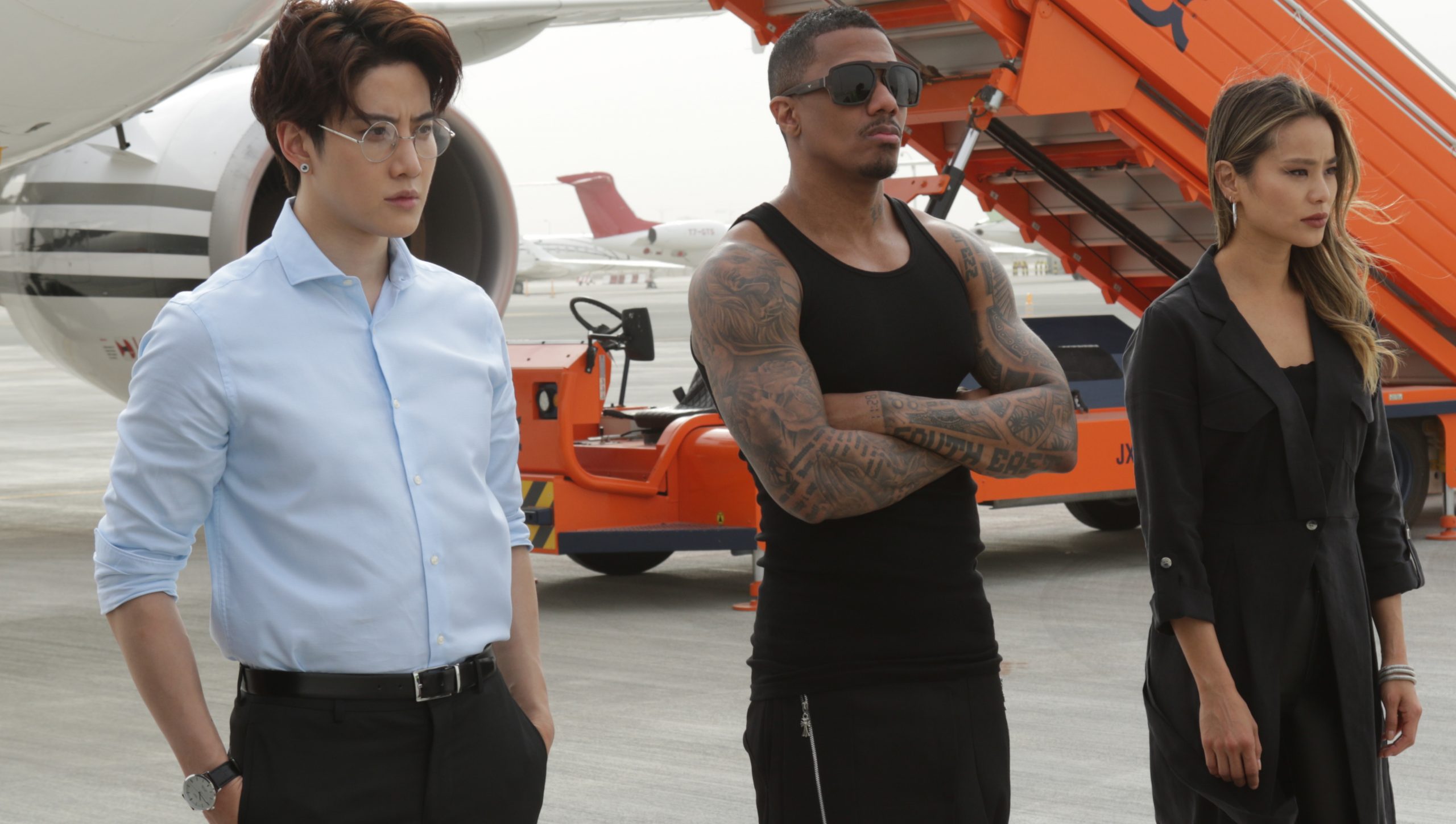 APA: You mentioned that you’re into action films. While most of your past work has largely been focused on romance, was there anything you wanted to do while taking on a different genre?

Angelo: Well, I haven’t really gotten to do a lot of fighting. Most of my previous works were mostly arguments, so people don’t really know what I can do. I can do my own stunts like when I was in China filming this TV series, I did my own stunt getting hit by a car. Being able to do something like that without a stuntman was fun.

APA: Did you have to do any training or preparation to get into action work?

Angelo: I didn’t really do any focused training. I mostly watched stuff on YouTube and just tried to imitate what I saw. I learned a lot from watching YouTube and videos on the internet.

APA: Would you say your approach to acting is also very do-it-yourself?

Angelo: Actually, I would say most of my skills have been self taught like recently fighting and nunchucks.

APA: You filmed “The Misfits” back in 2019, right? That must have felt like so long ago before the pandemic. Can you share what it was like filming at international locations like in Abu Dhabi and Dubai?

Angelo: It was really comfortable traveling around two years ago. It was fun. It was actually my first time in Abu Dhabi and Dubai. It felt like I was on vacation, as if I wasn’t working and just hanging out with friends.

Angelo: Yeah, I love this kind of work. I mean, I was nervous in the beginning but after getting to meet up with the cast and everyone. I was so happy and it was an amazing experience for me.

APA: How was it filming in the desert?

APA: I’m sure they appreciated that. [laughs] While filming, were there any memorable moments or favorite scenes?

Angelo: I personally liked the scene when I’m dancing and about to blow up the vault. It was such a fun scene to be doing something dangerous and silly at the same time. When we were shooting on set, I was actually freestyle dancing to “Treasure” by Bruno Mars, but in the actual movie, we used a different song. When I saw that scene later, I wasn’t expecting it and I was laughing so hard since it just had a different vibe than what I expected.

APA: Jumping off that, there were scenes where you really got to showcase your character more and many of them, if not all, were with Pierce Brosnan. How were your scenes together?

Angelo: Every time I went on set with him, there’s always this thing in my mind like ‘Wow it’s 007.’ I have watched those movies with him since I was really small. I was really nervous about doing those scenes with him, but since he was so friendly, he helped me a lot to stay cool while shooting. 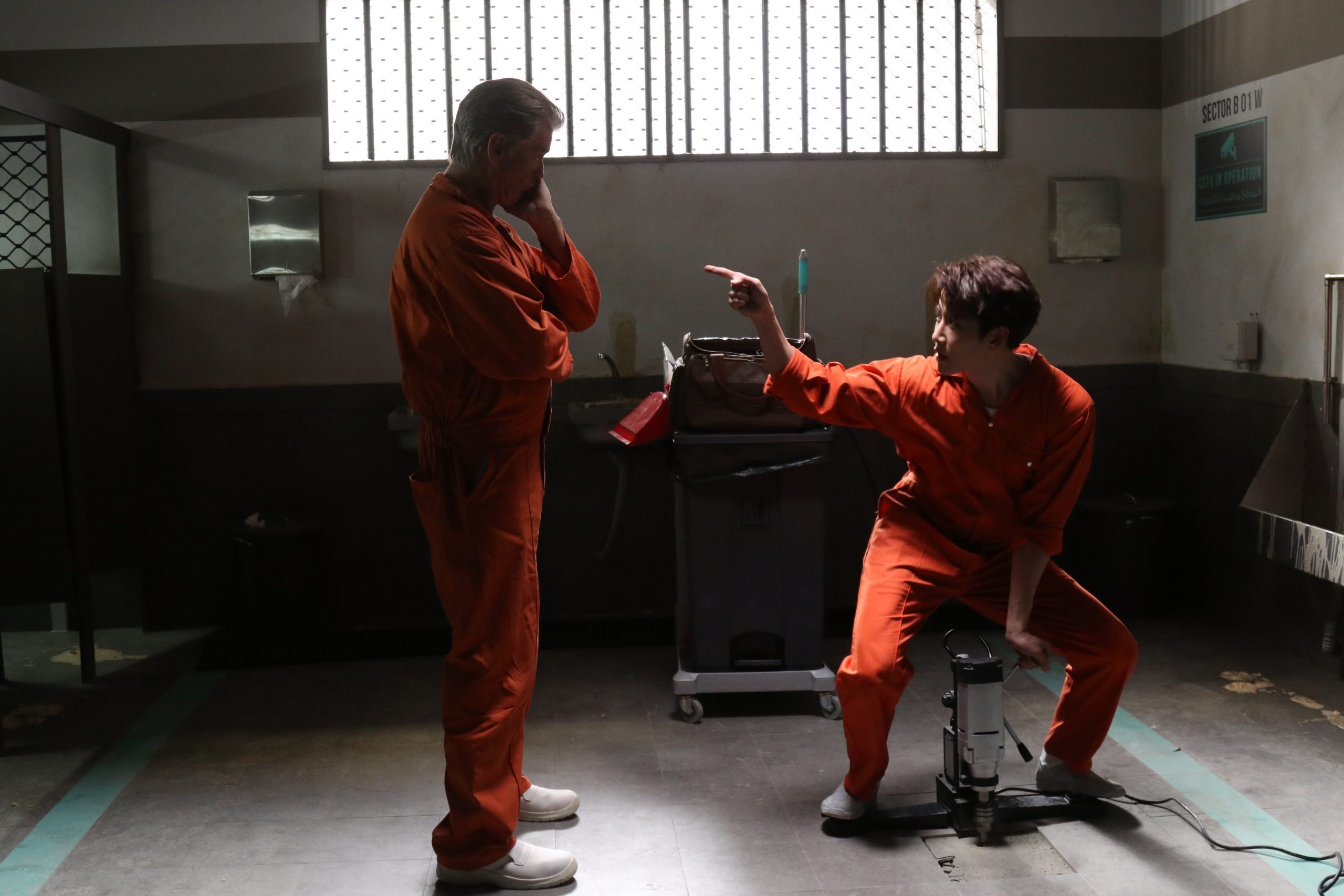 APA: Fast forward to now, is there anything that you’re working on now? What’s your next ideal project?

Angelo: I’m normally based in China, but I’ve been stuck in Thailand for almost three years now. I might be doing another movie really soon. Hopefully co-producing it too. It would be my first time co-producing something, so I’m hoping this can happen.

APA: Is there anything that you can share about this film? Romance? Action?

Angelo: I can say that it’s action, no romance.

APA: OK, you’ve had enough of romance projects. You’re ready for something different?

Angelo: Yes, I want to do something different and let others see me as not just the stereotypical business guy character in a romance.

APA: And will this likely be a Chinese project or Thai one?

Angelo: It’s gonna be a Thai project. I’m gonna be stuck here for a few more months before I go back to China, so I’m trying to find something to do.

APA: This goes back to that do-it-yourself style we talked about when it came to learning how to fight and do some of your own stunts.

Angelo: Yeah, I like to do stuff by myself, so I need to learn a lot in order to be able to create what I want. I’ve taught myself a lot of other things like making music videos, directing, editing and doing CGI sometimes too.

APA: Anything like new hobbies or skills you’ve picked up during the pandemic?

Angelo: Well, I started cooking and realized I’m really good at it.

APA: You know I now have to ask what’s a dish that you’re confident in making?

APA: Something that your fans shared with me is that you’re into robotics engineering and making your own robots. Is that something fans might be able to see incorporated into any of your future work?

Angelo: I guess not anytime soon because I’m still a beginner. I’ve just been learning from YouTube, everything is there nowadays. I started getting into robotics because of Avengers: Endgame. I was so sad when Tony Stark died. I thought there needs to be an Asian Tony Stark. Let’s build a robot. So far, I got a robot arm. No body or head yet, but maybe in the future. Maybe I might have my own laboratory as well.

APA: Any goal you want to achieve by the end of the year?

Angelo: I’m a workaholic, but I haven’t been working for a while. I’m hoping I can go back to China and start working again to get back on track.

APA: To round things off, anything else about “The Misfits”?

Angelo: I hope people go check out The Misfits in theaters. I put a lot of effort into it, so I really appreciate my fans who plan to watch it.