South Korean director, producer, and screenwriter Bong Joon-ho made headlines earlier this year with his Oscar Best Picture win for Parasite, and new fans curious about his earlier works are in for a treat. A remastered version of his 2003 crime drama film, Memories of Murder, is set to be released in theaters and via streaming in late October. A fictional story based on true events, the plot covers the investigation of a string of rapes and murders in Korea in the late 1980s. Re-emerging at a time when serial murder TV dramas and documentaries have been particularly prevalent in the United States (e.g. Making a Murderer, I’ll Be Gone in the Dark, Mindhunter, etc.), Memories of Murder continues to stand the test of time with Bong Joon-ho’s deeply human approach to storytelling.

The movie opens to a group of children playing in the Korean countryside in the fall of 1986, an idyllic scene interrupted by a detective’s discovery of a dead woman’s body hidden in a ditch. Inspector Park Doo-man (Song Kang-ho) and his bellicose partner Cho Yong-koo (Kim Roi-ha) are assigned to the investigation, and they find themselves trying to work amidst a local police department rife with incompetence, including a bumbling forensics team who arrives late to a tampered crime scene. Park himself isn’t exactly a by-the-books kind of officer, but it’s easy to sympathize with him at first as he tries to pull together enough evidence to find the killer despite a blundering crew. Park believes he has a natural ability of identifying guilt or innocence merely by peering into a person’s eyes, but his self-professed superpower is of no help to him in this situation. Song Kang-ho plays this role with vigor, giving dimension to the character in embodying both his comical and antagonistic traits. 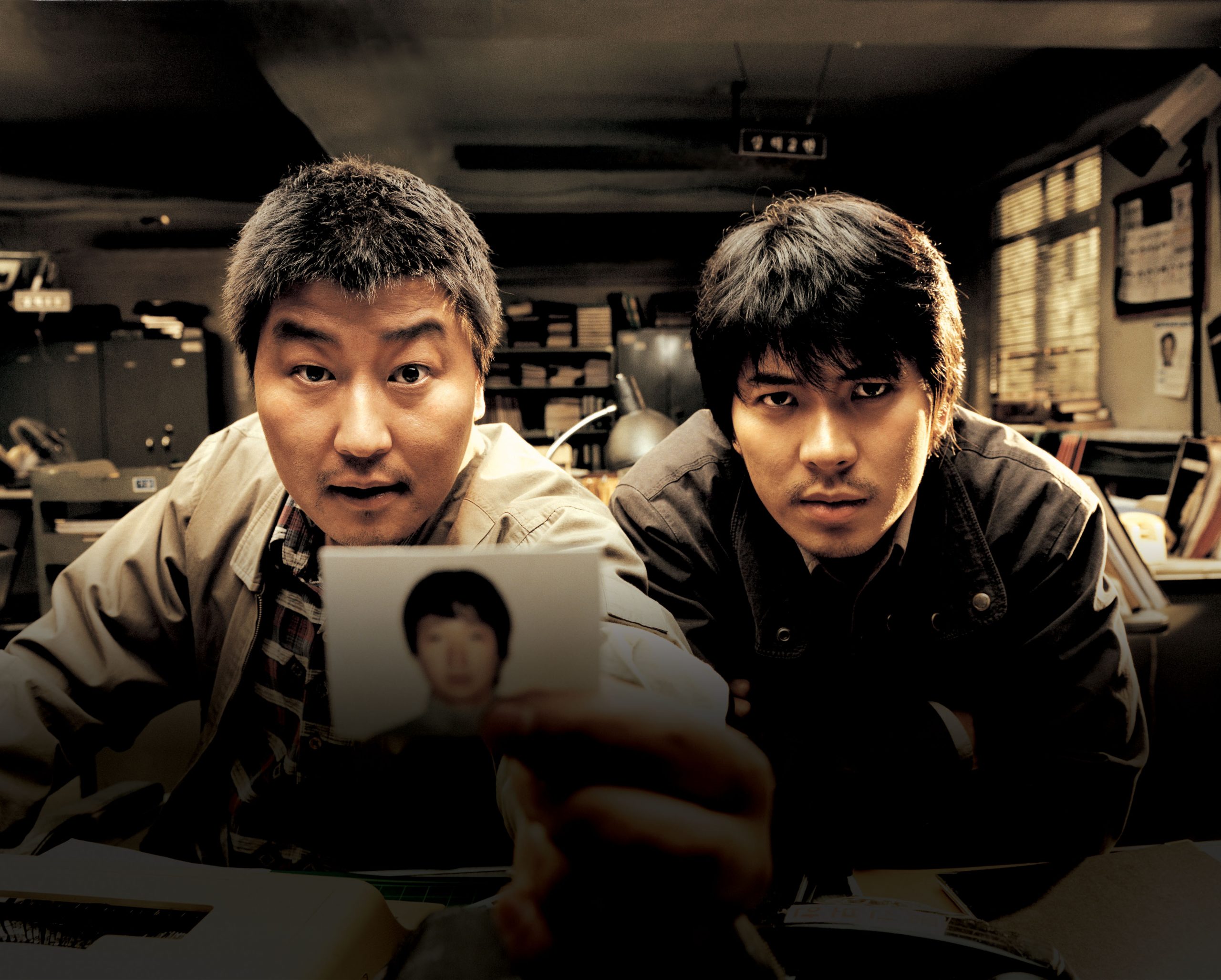 To assist with the case, Inspector Seo Tae-yoon (Kim Sang-kyung) arrives from Seoul and joins the team. Methodical and objective, Seo serves as a perfect foil for Park. With a propensity toward what Park describes as an “American” way of thinking, Seo approaches the investigation studiously, vetting all his options before jumping to any conclusions. At first Seo withholds his reservations as he watches Park and Cho, who are desperate for answers, attempt to coerce a confession out of a mentally handicapped young man named Baek Kwang-ho. Baek can describe the scene of the first murder with enough details that it almost incriminates him as the killer, but Seo proves that Baek cannot have committed the killing because of the state of his hands. The investigation team is shamed in the media for the wrongful accusation, and the detectives find themselves back at square one.

As the case begins to unravel further, and with the murders growing more heinous, the team begins to build up a basic psychological profile of who the killer might be and when he might strike next. Officer Kwon Kwi-ok (Go Seo-hee), an underappreciated female member of the force, discovers that the crimes occur on rainy nights after the killer requests a specific song on a radio station, and his victims are always wearing red. Knowing this, we as the audience become immediately apprehensive when the scene of an incoming storm is set, the ballad begins to broadcast, and we watch as a lone woman walks down a road in the dark. What’s interesting to note is that, throughout the film, rather than delving deeply into the mindset of the murderer, Joon-ho chooses to focus more on the emotions and reactions of the investigators. In the scenes with the killer, who remains unknown, the tension is built up not just by the suspense factor of an anticipated murder, but also because we foresee the inevitable frustration the detectives will experience when they find the body too late. Bong Joon-ho understands how to create characters we become invested in, and with every potential resolution that turns out to be a dead end, we are pulled in even deeper. 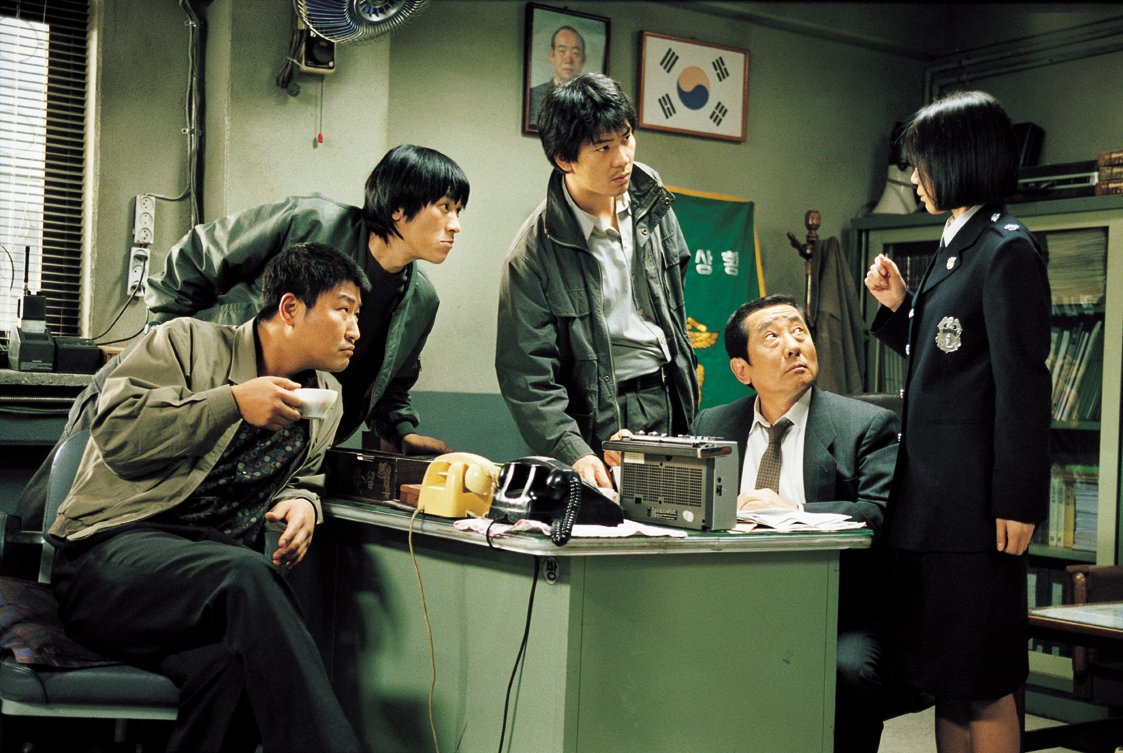 After several dashed hopes, Park and Seo finally land on a promising suspect, and they send the DNA samples to be tested in America, where forensic DNA profiling has been recently introduced. The moment when the result arrives is a pivotal one for these characters as their limits are tested. Throughout the movie, Seo has been determined yet level-headed, unswayed by the idea that justice is obtained through iron fists. However, when a young girl Seo had met during his investigation falls victim to the killer and the DNA results come back as inconclusive, rage overtakes him. The news leads him to chase down the suspect, and he nearly shoots him. Seo is stopped by Park, who tries futilely one last time to determine the suspect’s guilt by staring into his eyes before finally letting him go.

Many years later, Park has moved on from his life as a detective and is now a family man with a sales job. Making a stop on a business trip, he returns to the ditch where the first body was found. A young girl nearby questions why he is there and when Park says that he was visiting a site of importance to him, she remarks that she had heard the same response from a man with an “ordinary face” who had visited the spot earlier. As Park comes to the realization that the killer must’ve returned to the scene of the very first crime as well, he stares directly into the camera, still plainly haunted by the unsolved serial murders after all these years. With Memories of Murder, Bong Joon-ho employs a genre-mix of thriller, tragedy, and black comedy to comment on the faults of the policing system and the fragility of society at large. Through this film, he highlights an unforgiving truth – that sometimes a case is left cold and justice is not always served.

Memories of Murder will be released in theaters on October 19th and October 20th and on-demand on October 27th.