Originally premiering at the Los Angeles Film Festival in 2019, Children of the Sea became available on home entertainment at the beginning of September 2020. The Blu-Ray provides several hours of behind-the-scenes material, including storyboards, staff and cast interviews, as well as the making of the movie at STUDIO4°C. Clocking in at nearly two hours, the movie waxes poetic over every detail as it’s a visual masterpiece without a single background attribute gone unnoticed. The film comes off as a dreamlike mixture of art, akin to Disney’s 1940 Fantasia. Although some viewers at the first American screening leaving theaters puzzled, the film is a must see. Don’t expect answers for questions; you won’t get them. Come for the artistic beauty and stay for the show.

The story follows Ruka, a young girl who has trouble with her peers. Despite her social awkwardness, she befriends two boys, who were raised by dugongs. In fact, their status as social outsiders is what causes their worlds to converge. Aptly named Umi and Sora, which translates to sea and sky, the boys take her on a whimsical adventure. The overarching plot hones in on the search for a “guest” to a mysterious festival, which the trio and all marine life know is approaching.

The visuals of this movie are in a league of its own. Many scenes feel like the animators are showing off their animation prowess, for example, through elaborate depictions of schools of swimming fish, dancing bugs, and cracking open a lobster. There’s also a mix of wide angle and long one-take motion shots that bridge 2D and 3D together. Notably, the color palette changes from bright, saturated tones in the introduction, shifts to a dark and subdued one when the deep sea fish rise from the depths, and returns back to vibrant colors as Ruka explores the sea. 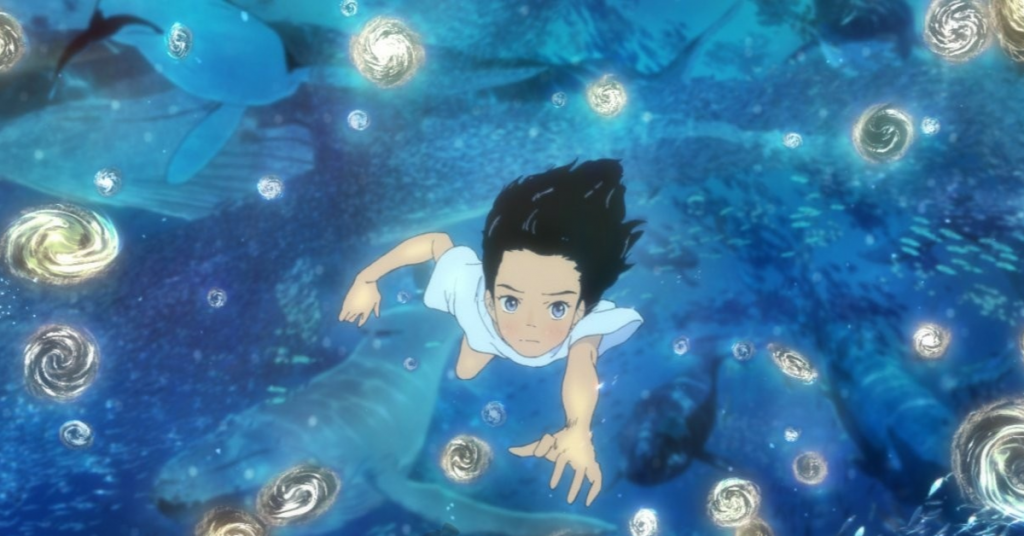 Communication is also central to the story. While the film explores the friendship and friction between humans, the sea and its creatures are all in sync, able to pass on messages through a variety of sounds. The movie presents an interesting perspective on existentialism and the futility of man trying to see and understand everything. The final 30 minutes of the film parallels scenes and musical motifs reminiscent of Stanley Kubrick’s 2001: A Space Odyssey.

All in all, Children of the Sea is a visual balm for those of us who are experiencing existential dread and anxieties about fitting in with our peers. Director Ayumu Watanabe fantastically weaves the material of five manga volumes into one feature length film, reminding viewers that whatever ails you will pass. In the words of William Blake’s famous poem Auguries of Innocence: “To see a world in a grain of sand…hold infinity in the palm of your hands.”

Much like the source material, the film shows that humans are only a small part of the universe and as such can only see a fraction of it. Through the exploration of the sea and the universe, as well as metaphoric representations of the start of life through a zygote, the movie is a call for humility through a visual representation of Carl Satan’s famous line, “We are all made up of star stuff. We are a way for the cosmos to know itself.”