Four years after his first zombie film Train to Busan, director Yeon Sang-ho returns with a sequel, Train to Busan Presents: Peninsula. While set in the same apocalyptic universe, Peninsula follows an entirely different set of individuals as they navigate the aftermath of the apocalypse. The story begins with Jung-seok (Gang Dong-Won), a marine officer, driving his sister along with her husband and son to the docks where a ship is taking survivors out of the zombie-infested territory of South Korea. An infected passenger leads to an outbreak on the boat, and Jung-seok fails to save his sister and nephew from falling prey to the zombies. In the four years since then, Jung-seok and his brother-in-law, Chul-min (Kim Do-yoon), have been barely getting by in Hong Kong, where locals blatantly discriminate against those from the “peninsula.” Hoping for a lucky break, Jung-seok, Chul-min, and two others accept a mission to retrieve twenty million US dollars from an abandoned truck in Incheon, South Korea, on the promise of receiving a portion of the money. 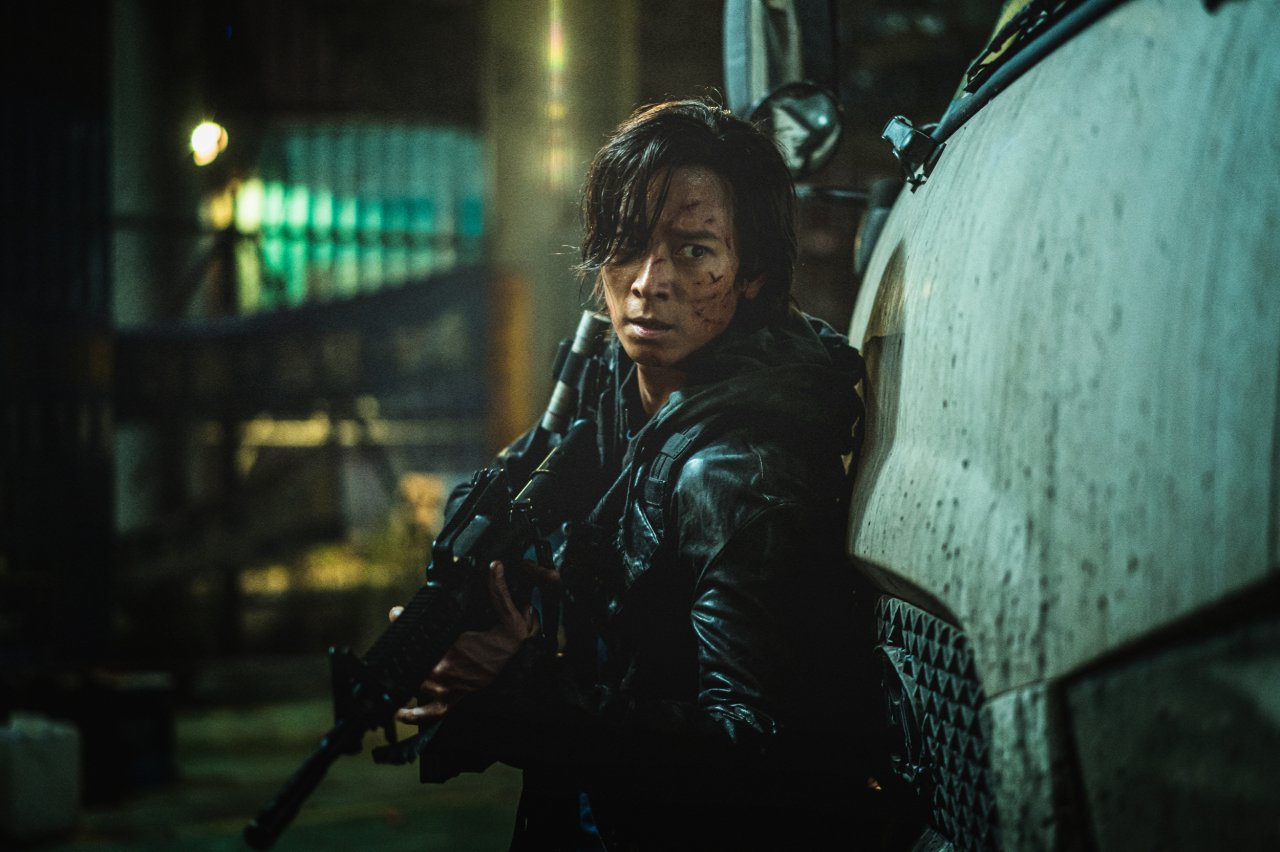 We first see the calamitous effects of the zombie outbreak from clips of news anchors reporting on what has become of the once thriving country, but it’s only when the group arrives in Incheon that we are hit with the visuals of utter desolation. The color palette turns from the bright warm colors of Hong Kong to the bleak, gray tones of an abandoned city. The Korean words “God has forsaken us” are scrawled in chalk on the ground, a stark reminder to anyone who dares to enter. During their retrieval of the truck, Jung-seok’s group is ambushed – not by zombies but by Unit 631, a former military troop who soon proves to be the main threat in the storyline. The zombies themselves are just as disgustingly horrifying as they were in the first film, but they don’t provide the same scare factor as in Peninsula, perhaps because the focus shifts away from these creatures of disease and instead towards the men who are dealing with their fear and hopelessness in savage ways.

The militants of Unit 631, upon failing to complete their task of rescuing survivors, have found themselves stuck on the treacherous peninsula themselves and have created their own “Lord of the Flies”-esque colony in Incheon. The rogue military group is one of the more interesting aspects of the otherwise fairly archetypal post-apocalyptic world. At the top sits Captain Seo (Koo Kyo-hwan), a feared and revered leader who controls everyone’s food rations while chugging down bottles of whiskey in his private makeshift office. The unit’s platoon often makes trips into the city to scavenge for supplies and ransack abandoned areas for food and is led by the violent and ruthless Sergeant Hwang (Kim Min-jae), whom Seo himself describes as even scarier than the zombies. Unit 631 depicts a microcosm of humanity driven to near insanity by despair, living off of their basest desires by hosting gladiator games where prisoners fight alongside each other to see who can last the longest in an arena of zombies. 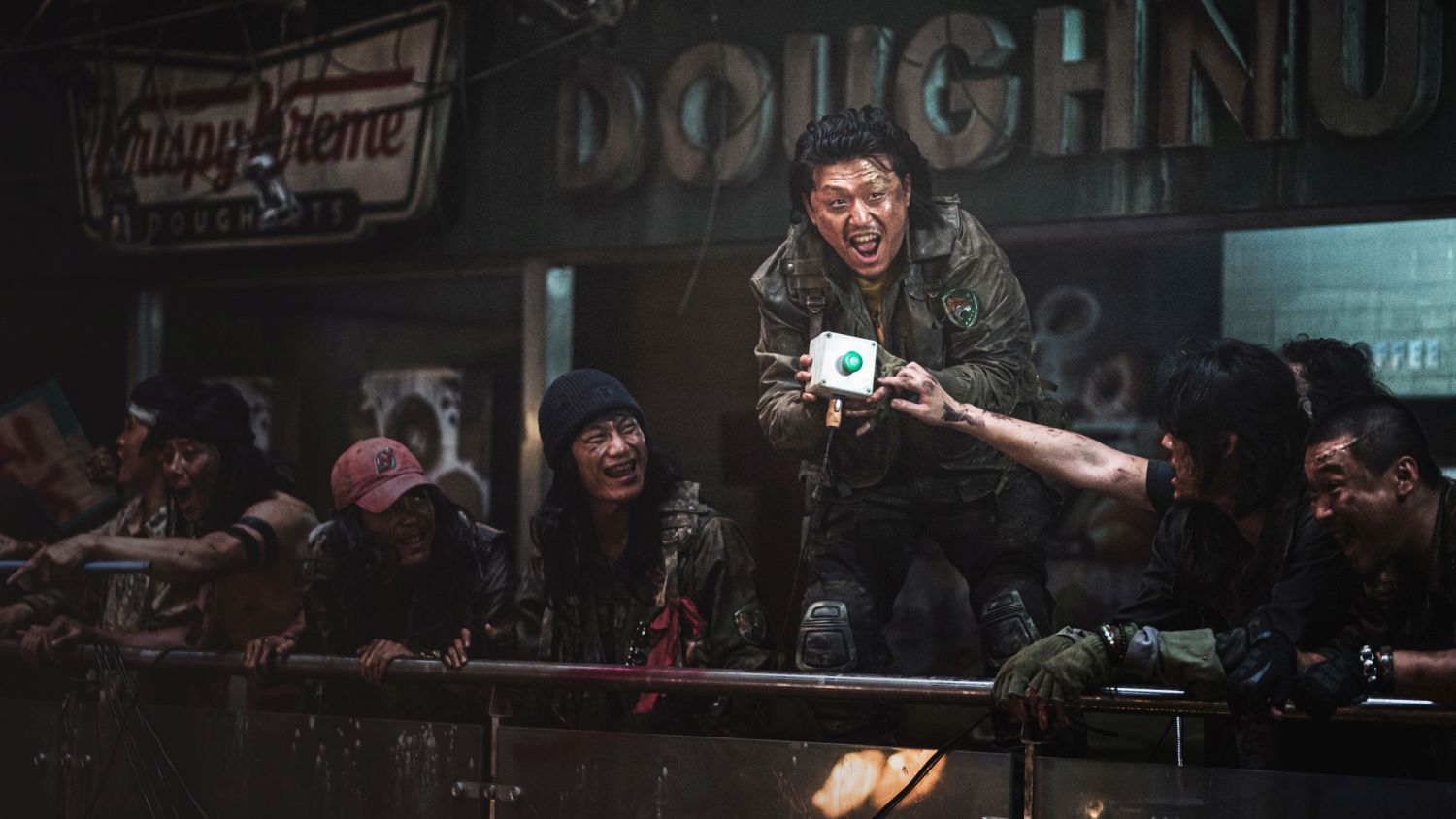 In another part of the city, Jung-seok has been taken in by a family of survivors: Elder Kim (Kwon Hae-hyo), a woman named Min-Jung (Lee Jung-hyun), and her two daughters, teenager Joon (Lee Re) and younger sister Yun-ji (Lee Ye-won). Their backstory is never explained so it’s unclear how they’ve been surviving for so long and whether they’re the only survivors besides Unit 631. When Jung-seok realizes that he had ignored Min-jung, then a stranger, when she had pleaded for him to take her daughter to safety four years ago, his sense of guilt comes back ten-fold. Jung-seok’s character doesn’t hold a great deal of depth, as survivor guilt seems to be the defining trait of his identity and thus his only point of character growth throughout the entire movie. Together, the five of them plan to steal back the truck, which also contains a cell phone they hope to use to contact help.

Unlike the first Train to Busan, the bulk of the action scenes in Peninsula are high-energy car chases. The film relies heavily on these sequences, especially towards the end of the movie as the two groups clash. Joon and Min-Jung are both able to expertly drift down the streets in their souped-up SUV, avoiding Unit 631and weaponizing their vehicle against mobs of zombies. It’s quite a departure from the first film, which mostly depicted close-range, hand-to-hand combat. These action scenes are a reflection of the differences between these two films in general – while Train to Busan offers a tighter perspective, both in terms of storytelling and actual physical environment, Peninsula expands outwards by emphasizing the scale of the outbreak and upping the grandeur of its action sequences. The increased use of English in this movie is also worth mentioning, which, while indicative of the global impact of the zombie epidemic, may also be an attempt to appeal to wider audiences. 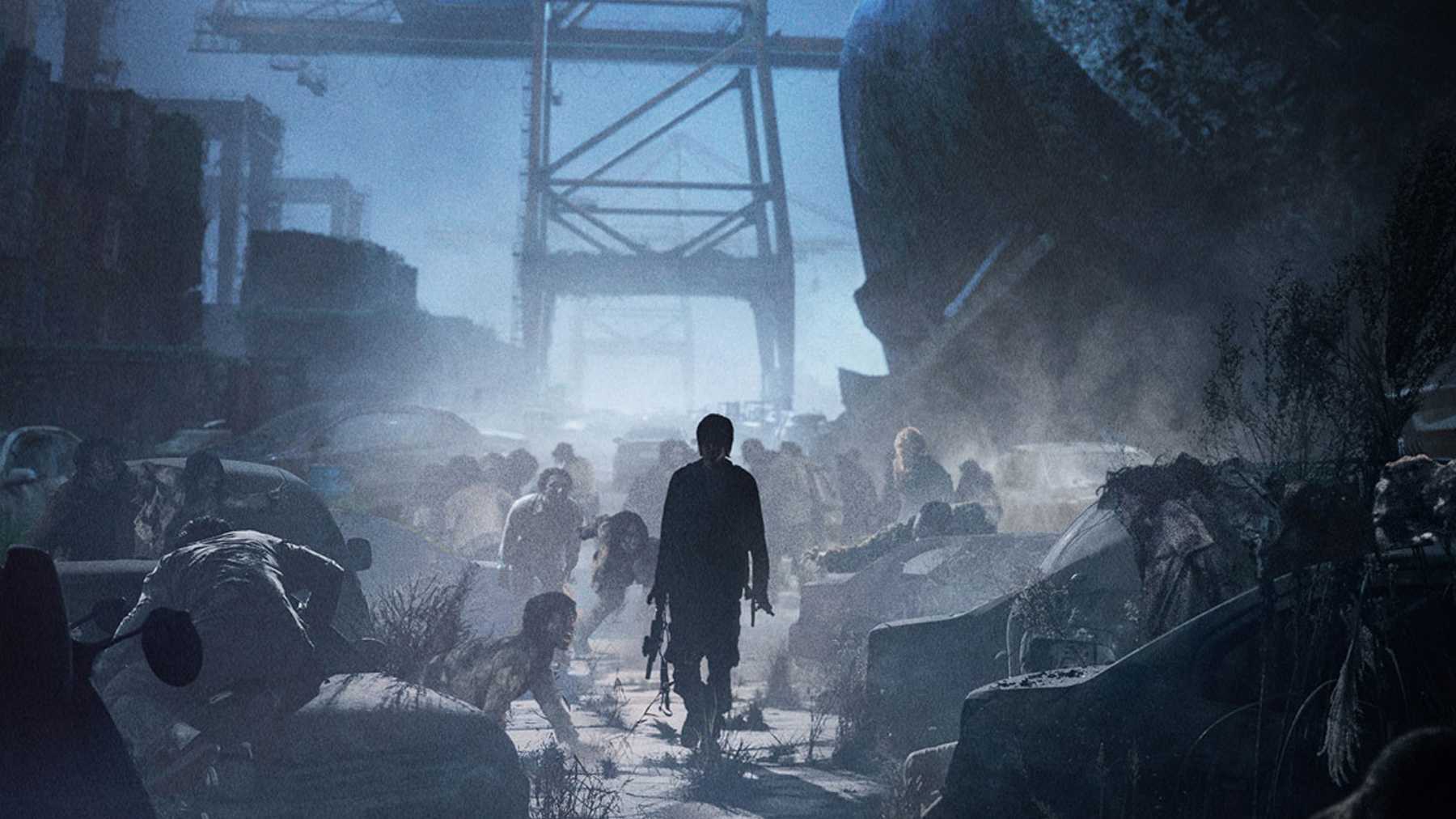 Sacrifice is a running theme throughout the film, from Chul-min protecting Jung-seok from the line of fire to Elder Kim taking a shot for the young Yun-ji. However, this noble concept of self-sacrifice is turned on its head in the final scenes. When the U.N. arrives to rescue the survivors, Min-jung puts herself in harm’s way to lure the zombies away from her kids and Jung-seok. In a scene that recalls the infamous “Martha” moment of Batman v Superman in that it’s a bit too on the nose, a U.N. major tries to assuage Jung-seok that there’s nothing he can do to save Min-jung by calling her action a “sensible decision.” The remark reminds Jung-seok of how the phrase was used to describe his sister’s sacrifice on the boat four years ago, and propelled by guilt and desire for redemption, he runs to stop Min-jung from killing herself. While lacking nuance in the execution of this scene, the film does ultimately drop its romanticization of self-sacrifice, letting the protagonist actually save someone and rid himself of his guilt.

While Peninsula follows a fairly predictable plot, the scarily realistic zombies and fast-paced car chase sequences still make for a high-octane film. Overall, Peninsula is a departure in tone from the first Train to Busan but still an enjoyable watch for anyone looking for a blockbuster movie with plenty of action.