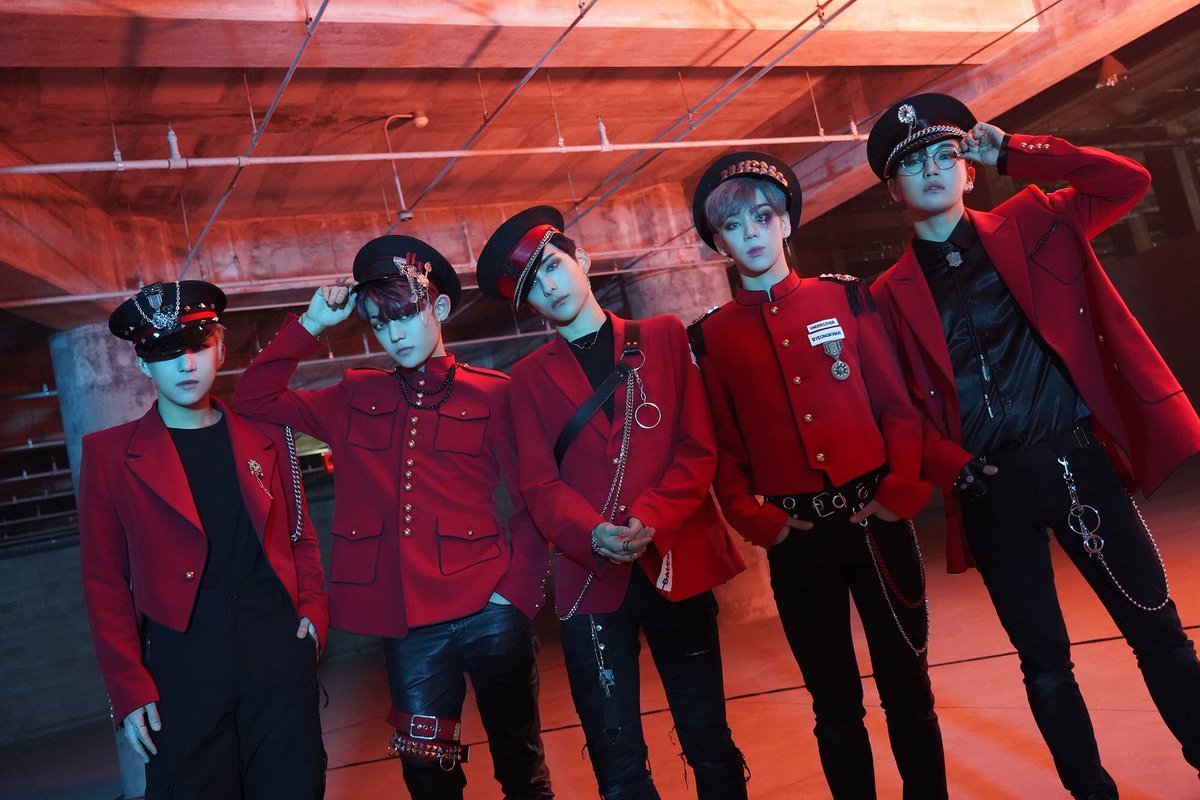 5-member K-pop band A.C.E has returned to San Francisco’s August Hall on Friday, December 20th for their [UNDER COVER: AREA US] tour, one year and two comebacks after their last world tour. This time, they are back with a host of new original songs and choreography, but they also made sure to feature several covers, paying homage to their roots in busking.

Opening the show was a special guest: the winners of MyMusicTaste’s A.C.E cover dance competition. Eclipse, a K-pop dance group based in NorCal, delivered a powerful dance cover of “Savage” to the audience’s excited fan chants.

Before the crowd’s cheers could subside, the silhouettes of the five A.C.E members, Jun, Donghun, Wow, Byeongkwan, and Chan, emerged to a dramatic, string-heavy intro that seamlessly transitioned into “Under Cover,” a relentless fusion of rock and hip-hop that ignited the energy in the venue.

The band sported navy button down uniforms and ripped black jeans that accentuated their commandeering yet rebellious stage presence. Byeongkwan’s look, which consisted of a crop top officer uniform, black waist belt, and a shock of red hair was especially arresting. After a mesmerizing performance of “Do It Like Me,” which showcases one of their most intricate choreography, the band officially introduced themselves and expressed their gratitude to all the fans who showed up.  Their next performance of “Take Me Higher” lightened the mood, not only because of the track’s summery rhythms and refreshing melodies, but also because the bandmates took the song as an opportunity to sneak in heart gestures to show some affection to Choice, their fans.Next, Donghun and Byeongkwan performed their unit song “Dessert,” another breezy, summertime track, and to the audience’s surprised delight, the duo was joined by the rest of the members for the last verse. The band took a break from performing to interact with the fans, expressing their excitement to be in San Francisco and beaming with pride as the crowd sang along to “Take Me Higher.” Byeongkwan commented that “San Francisco is such a cool city,” but his bandmates agreed with the audience’s sentiments that the city is too expensive, joking that “if [they] told their parents they were moving to San Francisco, [they] would get smacked!”  As the audience calmed down, A.C.E continued with their unit cover stages, starting with Wow and Byeongkwan’s rendition of “Old Town Road,” complete with cowboy hats and unapologetic swagger. Jun, Donghun, and Chan showcased their top-notch vocal abilities in a heart-wrenching cover of Lewis Capaldi’s “Someone You Loved,“ in which their harmonies and somber expressions conveyed the pain of loneliness and heartbreak. After their next vocal performance of “So Sick,” a ballad evoking the feeling of a fading relationship, Jun commented that “’So Sick’ is a sad song, but the audience’s reaction was so positive” that it was hard for him to feel sad in the moment.

However, the solemn mood would not last for much longer. “Are you ready to see more sexy performances?” asked A.C.E. The crowd’s wild cheers indicated an undeniable affirmative response, so without further ado, the group launched into “Slow Dive” and “Black and Blue,” delivering the promised dose of sexiness, all the while displaying their incredibly stable vocals. It’s this combination of clean, powerful dance moves and high-caliber vocal technique that keeps fans hooked on A.C.E’s performances, not to forget their palpable love for performing.

To celebrate the holiday season, A.C.E doled out holiday cheer while decked in Santa hats and reindeer ears with their Christmas medley. The members tossed candy to the audience during their performance of “All I Want for Christmas is You” and ended the song with sweet harmonies so perfect that one could mistake them for an acapella group.

As the members exited the stage after “Mr. Bass,” the lights dimmed, and Byeongkwan’s voice gently guided the audience to close their eyes and listen to their story. “It’s okay, you’re not alone,” he whispered. “I’ll be right here.” The members took turns telling an emotionally poignant allegory based on the hardships they faced when debuting, comparing themselves to “a lonely cactus, lost in the desert.” But then they found Choice, who breathed life into them and “made [their] dreams come true,” and they promised to return the favor and sing for Choice “with this voice [fans] have given [them]”. At the end of the emotional narration, several Choice were holding back tears, but their spirits were lifted when, upon opening their eyes, A.C.E reappeared on stage, shining brightly in the stage lights, as if reassuring Choice that they will always be by their side. Their next stage, “Calllin,”was met with fervent fan chants that matched the driving, high energy of the song. The intensity of the atmosphere ratcheted up as the group performed “Savage,” a hard-hitting, trap-based track paired with choreography full of attitude (and multiple jacket removals).

A.C.E’s easygoing personalities made you feel as if you were spending the night with close friends, and the audience’s despair was audible when the band announced that their next stage will be the last for the evening. The members again expressed their genuine gratitude to all the fans for providing such great energy and for giving them a “beautiful memory.”Donghun, who noticed that several Choices were tearing up after their comments, professed his appreciation to the fans: “Thank you for laughing with us, for crying with us, and for supporting us all the way”. A.C.E’s leader Jun shared that his father used to berate him for his lack of emotion while singing, but now, he smiled and said, “Because of you all, I can tell my father that I am a singer who can make others happy.” Normally a jokester, Byeongkwan had a serious expression, confessing that he “is starting to get a little scared” because they work to bring the same level of energy that they receive from the fans. “If we come again next year, I’m scared to see what kind of energy you’ll bring!” Wow wrapped up their farewell message by promising the fans that A.C.E will “take the energy they have received from this concert and will channel it into producing a great album in 2020.”The band took a long look at the audience, as if to memorize each and every Choice’s face, before starting their groovy cover of “Easier,” originally by 5 Seconds of Summer. Their performance of “5TAR,” an emotional song dedicated to Choice, left the audience chanting “A.C.E! A.C.E!” eager to bring the group back on stage. The band happily obliged, performing their debut song “Cactus” and another fan-dedicated song “If You Heard” for their encore. They made sure to end the night with a feel-good performance of “Holiday,” in which Chan lived his rapper dreams by doubling Wow’s rap part while the rest of the members jumped around onstage, infecting the audience with their euphoric energy. With waves and big smiles, A.C.E bid their fans farewell: “San Francisco, until next time!”— Vania Fong