Although he is widely known as a master of horror, Ito candidly shared to a room packed with fans that he harbors many of his own fears and ironically, one of them is speaking in front of large crowds. Although the artist has never specifically researched phobias, his work proves he has a knack for coming up with bizarre ways to strike fear in readers. Ito wondered whether he is subconsciously scared of humans and how they move, which may be why many of his stories depict the human body in strange conditions. 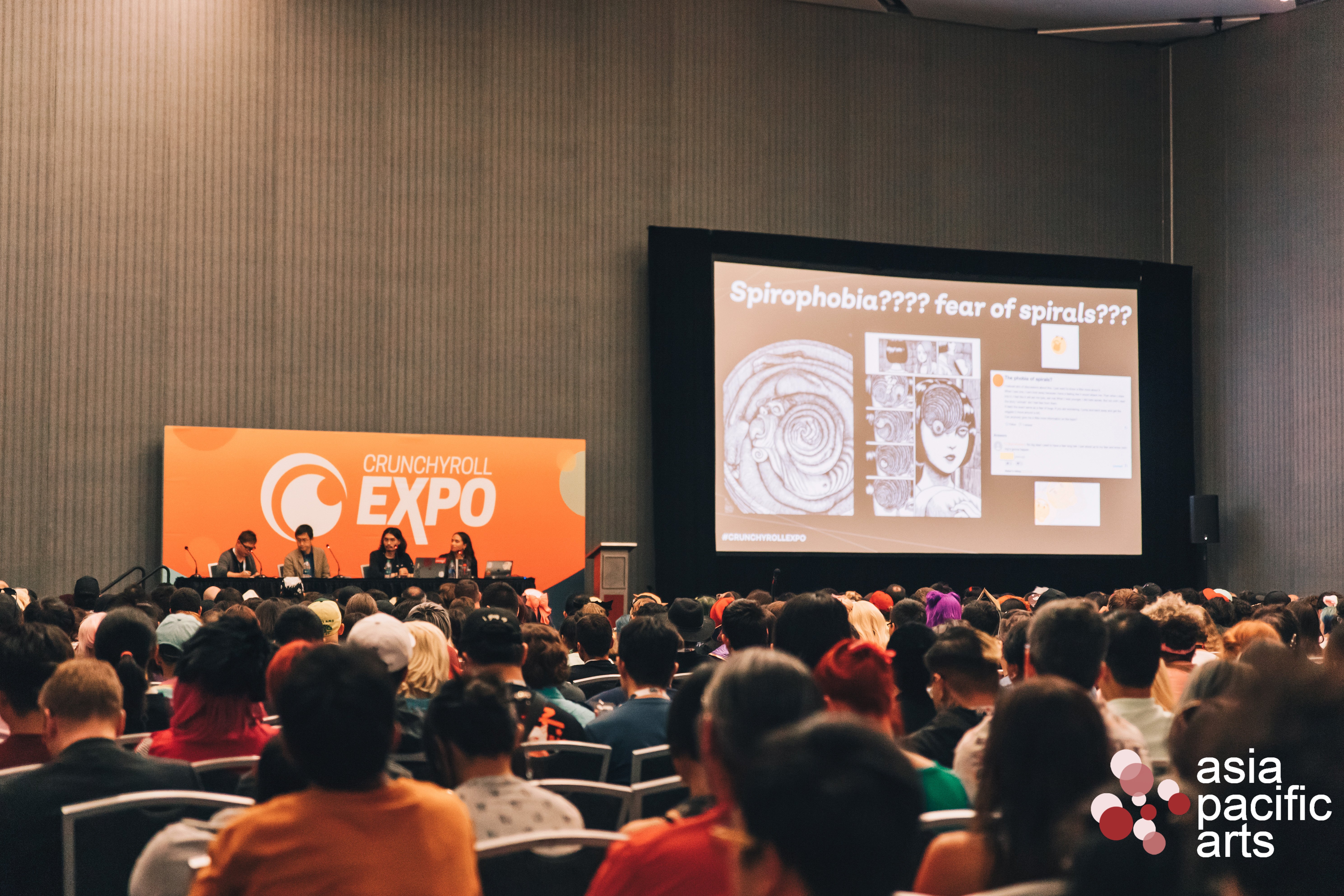 Diving into a few of his works, the creator shared the various ways he came up with these stories. Ito said he’s often influenced by things he’s seen. For Tomie, he was inspired by looking at different fashion models in magazines and the mysteriousness that surrounded them. As for Gyo, his interest in sharks started after he saw Steven Spielberg’s Jaws. He suddenly had a thought that formed the premise of the horrifying sea creature tale: Sharks aren’t all that scary because typically, humans are on land and sharks are in the water, but what if sharks were able to emerge from the sea and walk on land? Although it’s rare for Ito, sometimes his ideas come from dreams. Once he dreamt he was in a large space like an airport where he was approached by a kokeshi doll with a rope that wrapped itself around his neck. Later that became the inspiration for The Hanging Balloons.

While Ito is passionate about horror, he is also known to be a huge cat lover. In a unique panel, Ito rated a number of anime’s most famous cats from My Neighbor Totoro’s Catbus to Sailor Moon’s Luna and Artemis based on cuteness and scariness factors. In judging Doraemon, he said, “I can’t tell if it’s a cat… but its round paws are quite cute,” to which attendees couldn’t help but laugh. As a bonus topic, Ito was introduced to Animorphs, which he rated as definitely scary if it’s possible to get stuck mid-transformation.

The panel wasn’t all about Ito doting on adorable or questionable cats, as he also held a live drawing session of one of his own cat characters, Colin from Souichi’s Beloved Pet. The hair-raising illustration features Colin with a toothy grin presenting a gift: a ghastly creature with countless legs and eyes. Funnily enough, Ito paused momentarily in his drawing of Colin to share what he thinks is most charming about cats. He quickly grabbed another piece of paper to enthusiastically draw a sleeping cat with a double chin. After briefly looking at his quick sketch with satisfaction, he resumed his terrifying depiction of Colin. Seeing Ito spontaneously switch modes when drawing was certainly a highlight moment of the convention. To top it all off, he wrapped up the panel sporting cat ears and posing with limp wrists like cat paws while standing in between both his creepy and derpy cat illustrations.

Additionally, CRX 2019 hosted a gallery exhibiting Ito’s past original works, as well as new artworks specially created for the convention based on themes provided by Crunchyroll: “Scary man,” “Beautiful lady,” and “My cat.” While each piece of work was a sight to behold, the accompanying insightful descriptions were equally a joy to read, with some providing humorous context to frightening illustrations. “Depicting the grotesque is a ton of fun,” commented Ito on an exhibit label. The sentiment was clearly reflected in all of his beautifully twisted work on display.

Ito’s artwork wasn’t just for display, as fans could take home CRX x Junji Ito merchandise, ranging from t-shirts and hoodies to skateboards featuring the artist’s work. Although the convention had to come to an end, the artist didn’t leave without sharing an exciting announcement for fans to look forward to. Set to release in 2020, Uzumaki will be adapted into a four-part anime series. Prepare yourself to see those eerie spirals in motion.

CRX 2019 provided fans unparalleled access to Ito’s work and thoughts through insightful and engaging panels, with some lighthearted discussions about cats to introspective conversations about fear.