On the heels of performances at KCON LA, soloists Kevin Woo and James Lee performed two shows in California, along with band FYKE. On how the joint shows came about, James shared, “My friend Enik from FYKE had been bugging me about getting back on the road. I thought, ‘Well if it’s just the two of us and we’re not promoting regularly [that might be tough]. What if I bring my other best friend, Kevin? Maybe if we did it all together, it could be a lot of fun.”

So what happens when best friends go on tour together? “Well, Kevin has a bigger dressing room than me, but it’s OK,” James said. “Yeah, because you’re always in my dressing room!” Kevin retorted. “Honestly, I don’t even know why we have separate rooms.” Soon after, they both burst into laughter. Actually, our conversation really was all smiles and laughter, and the show was just as fun. 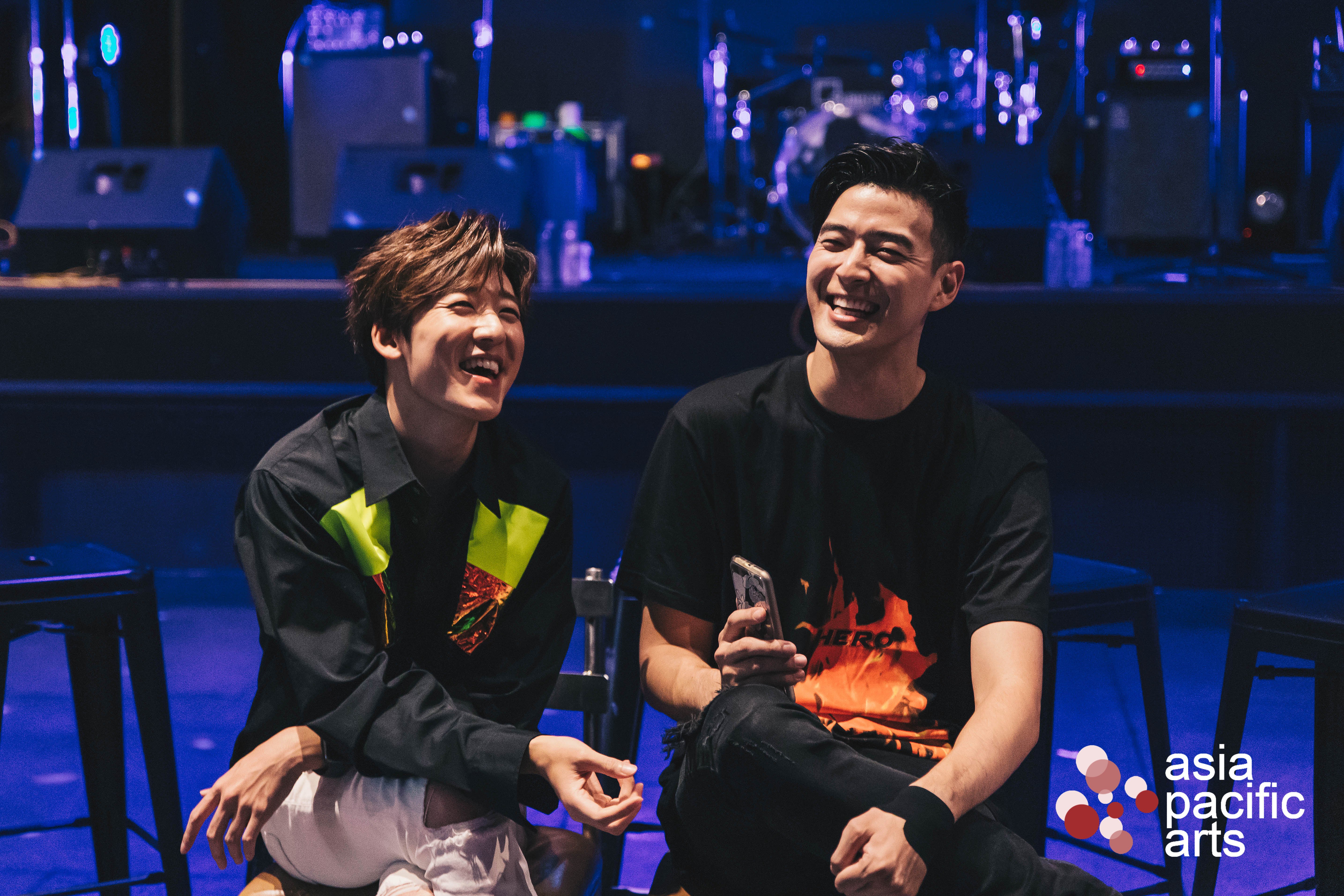 FYKE kicked off the show, taking the audience on a deep dive into introspection. Performing songs off their latest album, “Disorder,” the band explored mental health through a mix of rock, electronic and pop. FYKE’s performance reassured listeners that it’s OK to not be OK. “If you’ve ever thought life isn’t worth living, know that it is. You are loved and we believe in you,” Enik said before launching into a powerful duet of “The Edge” with James.

“James is one of the hardest working artists I know. Despite his accident, he’s never given up. His passion for music has grown even stronger, and I really respect that as an artist. He’s been pumping out songs ever since his solo debut. Every single has been like a hit,” Kevin said before briefly pausing. “For me.” Once again, the pair erupt in laughter. “He is very sensitive to his music, which is a crucial trait to being an artist. I want to write music like he does and there’s more I want to learn from him.”

Moving into James’ set, he took the stage with “Mad.” Clutching the mic stand, he passionately sang about letting go of his anger at the world caused by the life-changing accident that forced him to put his music career on hold, so he can move on to a fresh start. Switching things up, James performed “Automatic,” a slick and groovy track that automatically got the crowd moving along.

James’ music deeply reflects his personal experiences, as he shared how music became his therapy. The singer shared a special performance of an unreleased song titled, “Alright,” which he wrote during a time of hardship. From gentle romantic crooning in “Let’s Get Away” to intense headbanging in synth-heavy “Anxiety,” James showcased his musical versatility through a wide variety of styles exploring different emotions. Finishing his set, James was joined onstage by Enik once more to perform “The Light,” the lead track of James’ first EP. With an extra burst of energy, the pair bounded across the stage to sing to the crowd about the search for light, while struggling through the darkness.

“Honestly, I’ve known Kevin since he was a kid. I’ve known him for almost nine years and he’s remained one of the most genuine guys in K-pop,” James shared. “I’ve seen the inside and outside of the industry, so I know what goes on. Something I can tell you that is surprisingly valuable is my older sister became a huge Kevin Woo fan. She does not listen to K-pop at all; she’s into old school R&B. But she saw his performance and instantly became a fan. One more thing, Kevin has a professionalism about him that’s refreshing. A lot of artists can be lazy; he isn’t one of them.”

Entering the stage with two back up dancers, Kevin showed off his energetic dance moves and endless body rolls in “Freedom” and “Over You.”  When Kevin took a moment to greet the crowd, a fan shouted, “You can move your hips!” Demonstrating said skilled hip gyrations, Kevin cheekily responded, “That’s why I’m in K-pop, girl.”

Inviting James back onto the stage, the pair performed joint track, “Falling,” which they dropped right before the tour. The two have been wanting to collaborate and the stars aligned when James had a trip to Korea. After writing the track, James met with Kevin in Korea and they worked on the lyrics together. “Falling” came to be in only one day of recording, exemplifying their natural teamwork which they also demonstrated on stage.

Kevin’s performances are just as bright and playful as his demeanor. James wasn’t the only person he brought on stage, as Kevin selected a lucky fan for a special serenade. Performing Bazzi’s “Mine,” he lavished the fan with heaps of attention and sweet vocals, topping it all off with a hug and a kiss on the hand.

Powering through the rest of the show without breaking a sweat, Kevin nimbly performed upbeat dance songs like “Camouflage” and “Ride Along,” all with a beaming smile. What makes Kevin a joy to watch is how much he clearly enjoys performing and interacting with his fans.

Wrapping up the show, the three acts entered the stage to greet their fans once more. Enjoying a night of performances spanning a wide variety of musical styles, the crowd enthusiastically cheered upon their return. It would be a shame if the tour ended with only two Californian shows, so let them know if you’d like them to visit your city!