“Based on an actual lie,” The Farewell is a film rooted in the personal experiences of director Lulu Wang. The story centers around Billi (Awkwafina), a Chinese-American woman in her 20s who must confront the conflicting values of her two cultures when her grandmother (“Nai Nai” in Mandarin) becomes ill with cancer. As is customary in Chinese culture, when elderly patients receive a fatal diagnosis, their family members may choose not to inform them of their condition in the hopes of letting them live out their last days in peaceful ignorance. When Billi’s entire extended family reunites in China to spend their last moments with Nai Nai under the guise of a cousin’s wedding, Billi struggles to reconcile her family’s Chinese values with her American upbringing.

The morality of lying has been a long-standing debate in ethics, and The Farewell shines a spotlight on this question through the lens of two different cultures. The film begins with a phone conversation between Billi, walking down the streets of New York City, and Nai Nai, sitting in the waiting room of a hospital in Beijing. During this exchange, Nai Nai warns Billi about thieves who steal earrings. “You’re not wearing earrings, are you?” she questions her granddaughter on the phone, who, with earrings clearly on, assures her she isn’t. Moments later, Billi hears the intercom on the other end of the line and asks her grandmother where she is. Nai Nai brushes it off, neglecting to tell her about the hospital visit. This opening moment, in which each character tells a white lie to avoid worrying the other, establishes a foundational theme of the film. While Billi is comfortable lying about something as small as wearing jewelry, the situation becomes much more complex when she finds out about Nai Nai’s cancer.

When Billi first learns of her family’s plan to hide the truth from Nai Nai, she can hardly suspend her disbelief and is certain that they are making the wrong decision. But once Billi travels back to China and begins interacting with her relatives, she gradually begins reevaluating her initial reaction. Billi asks her aunt whether they should tell Nai Nai the truth and is met with the response that it’s better to lie to allow her to spend the rest of her life happily and worry-free. Later, Billi stumbles into a conversation between her father and uncle, who explain that in telling Nai Nai a lie, they are essentially carrying the emotional burden for her. That, her father affirms, is the main difference between Eastern and Western principles – while the latter values the independent self, the former regards each individual as part of a whole. From a Western standpoint, informing Nai Nai that she has cancer gives her the freedom to decide how to spend the rest of her life. On the other hand, the Eastern perspective poses the question, “Can we shield her from the detrimental consequences of this knowledge by suffering in her stead?” The film never tells us which of these philosophies is “right” or “wrong” but instead encourages understanding both points of view. 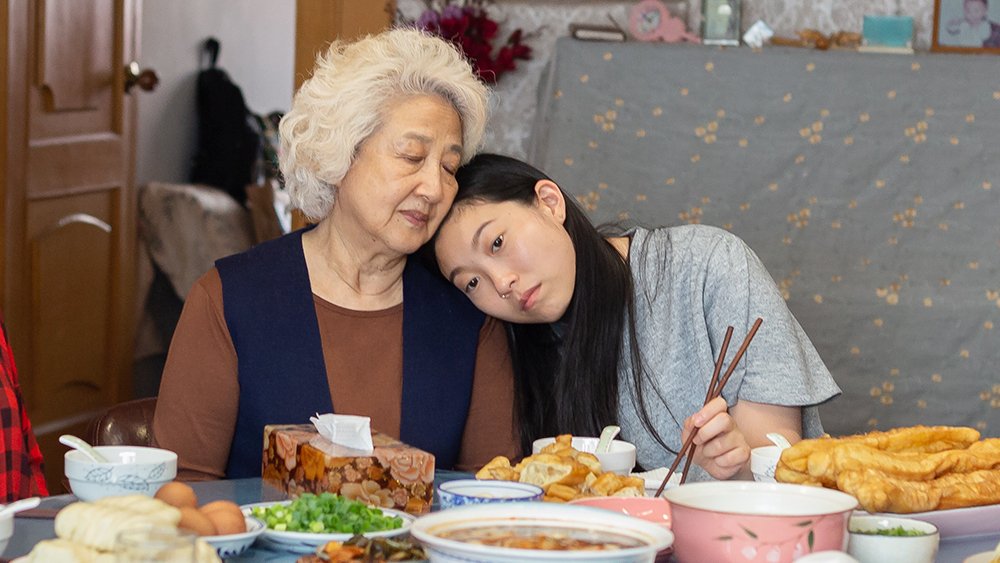 Despite tackling such a heavy theme, much of The Farewell is presented in a down-to-earth, often humorous, manner. The funniest moments emerge in the most unexpected scenes like at an engagement portrait session or during the ceremonial burning of offerings at a gravesite. The film does a fantastic job of displaying elements of Chinese culture in an amusing yet respectful way. Never relying on tactics of melodrama or slapstick, Wang merely tells it as it is, and the realness of such scenes is what makes them even more strikingly hilarious. Similar to some of A24’s other films, such as Eighth Grade and The Lobster, The Farewell reaches into the ordinary and sometimes uncomfortable moments of life and exhibits them in a self-aware, comical light. To convey the visceral emotions underlying pivotal scenes, the film makes prominent use of music and cinematography. Featuring a haunting voice over the lilting melody of a string quartet, the orchestral score’s main theme imparts an ominous, foreboding sentiment. Wang also hones in on certain moments by literally focusing on the individuals on screen, centering them in the frame Wes Anderson-style and sometimes blurring out the background in bokeh or playing sequences in slow motion to induce a dream-like effect.

Throughout the story, Billi struggles to reconcile the duality of her cultural identity. Having immigrated from China to the U.S. when she was young, she’s able to communicate in stilted Mandarin with her relatives but speaks almost completely in English with her parents. At a family dinner, she defends America against her aunt’s debasing remarks while still pointing out to her parents that it’s not exactly the golden land of opportunity that it’s made out to be. When an overly-curious hotel employee repeatedly pesters her about whether she thinks China or the U.S. is better, all she can muster is, “They’re different.” Awkwafina’s signature comedic nature shines through in many moments, but particularly of note is her ability to convey the turmoil of a character who is forced to suppress her turbulent emotions. In one scene, unable to verbally express her feelings in front of her grandmother, she hammers away her frustration at the piano while the conversation continues around her in the living room. Awkwafina’s earnest performance makes Billi a universally empathetic protagonist, and the confusion and rumination the character goes through is especially familiar to those who grew up identifying with more than one culture. Through Billi, The Farewell paints an intimate portrait of the Asian-American experience, and as a Chinese-American myself, watching the film felt like a homecoming of sorts.

For most audience members, this was likely their first time sitting in an American theater and watching a movie that not only included a full cast of Chinese descent and a Chinese-American director but also a script mostly in Mandarin. The romantic comedy Crazy Rich Asians spearheaded the revival of AAPI representation on the silver screen in 2018, and increasingly, Asian-Americans are making strides in the film and TV industry, both in front of the camera and behind the scenes. However, the path forward is not without obstacles, as evident in Wang’s journey in bringing The Farewell to fruition. Adamant against any white-washing of her project, Wang turned down many opportunities due to creative differences, and her story was initially presented as an episode of the podcast “This American Life” before finally debuting as a full-fledged film at the Sundance Film Festival.

The Farewell doesn’t have the grand mansions and lavish costumes that captivated audiences in Crazy Rich Asians, but the true beauty of Lulu Wang’s film lies in the authenticity of its characters and their relationships. Garnering critical acclaim and holding the record for highest per-theater average in 2019 so far, The Farewell proves to be not only a stand-out film in its own right but also a major step forward in giving a voice to one of the many stories of the Asian-American community.