Brought by Tokyo Direct, live manga artist Shinnosuke Uchida makes her debut U.S. appearance at Anime Expo 2019, creating her largest work to date. Working tirelessly at AX’s Artist Alley, attendees were able to watch Uchida spend 25 hours over the course of four days to complete the manga on an 8 ft by 15 ft canvas. On the final day of the convention, the piece was sold at AX’s charity auction for $400.

Experiencing AX for the first time, Uchida describes it as “a huge festival, where it feels like the entire city of Los Angeles is celebrating Japanese culture.” She was even able to meet one of her greatest inspirations, Akira creator Katsuhiro Otomo, at the convention. Sitting down in front of her large canvas, APA chats with Shinnosuke Uchida as she closes in on her final hours of finishing the large manga piece.

APA: Before becoming a live manga artist, you’ve faced rejection from publishing companies when trying to make it as a traditional manga artist. How did you decide that drawing bigger was the way to go for you?

Uchida: As you said, I wanted to become a manga artist before, so I sent my profile to different publishing companies. I couldn’t find the right place and nobody saw me as an artist, so I became a regular company employee. But four years ago, I decided I still wanted to do manga. I thought drawing big manga was something unique and something I’ve never seen before, so I thought I’d try it.

APA: What do you enjoy most about drawing big manga? 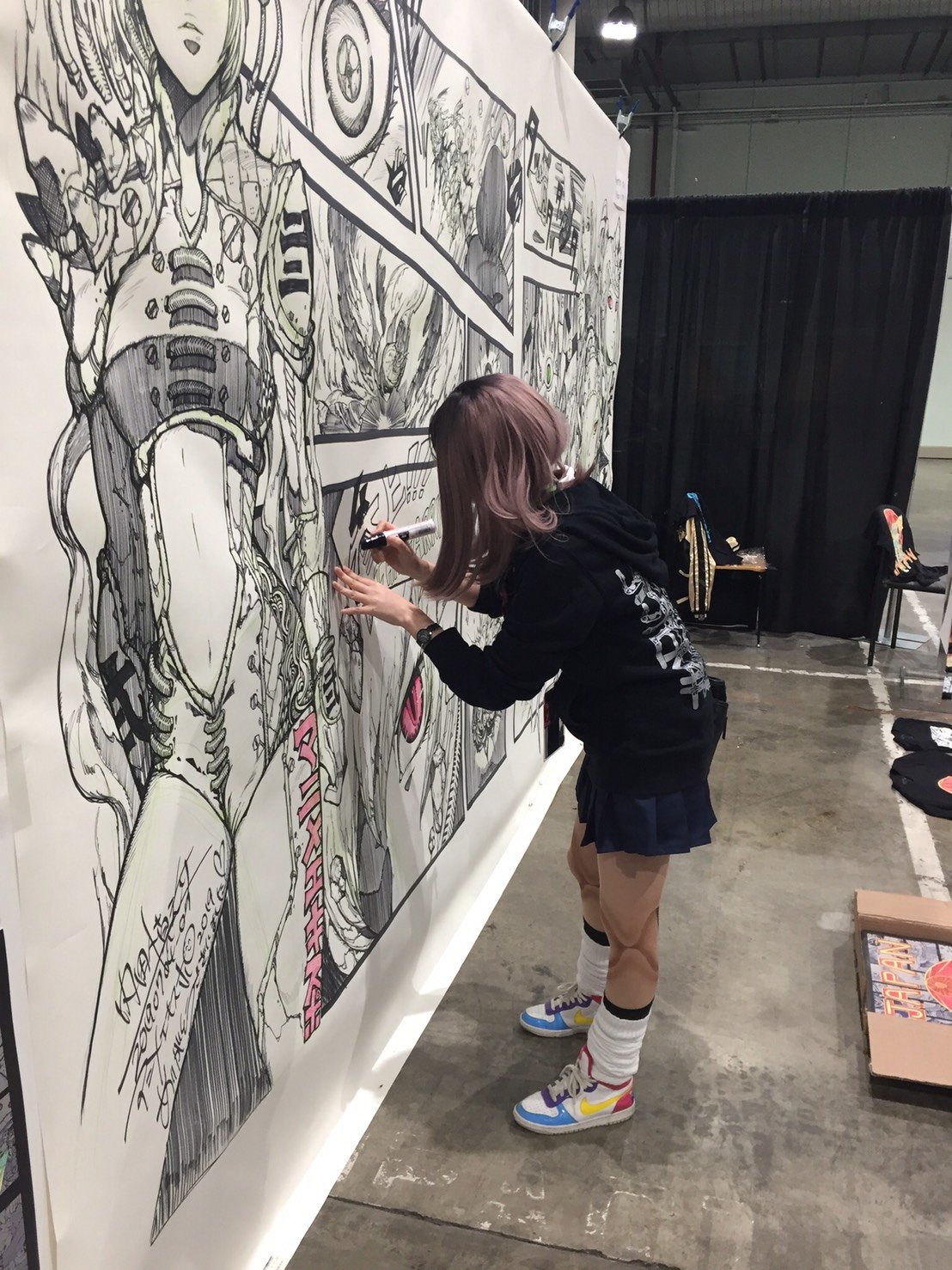 APA: I think most people see your work from far away, but sitting here up close, I can really see how detailed and dynamic it is. What tools do you use to create your work?

APA: It’s pretty amazing you can draw all these details with only one marker. Did you prepare any ideas or plans prior to getting started?

Uchida: No, I usually come out and see the canvas I’m working on first. Then, I’m able to visualize what type of manga I want to create.

APA: You’ve created so many large manga pieces in different cities and locations. Do your live manga pieces connect with each other?

Uchida: The drawings I do in Japan connect with each other in terms of the story. But the ones I do internationally are not connected.

APA: Can you tell us what the story is here? 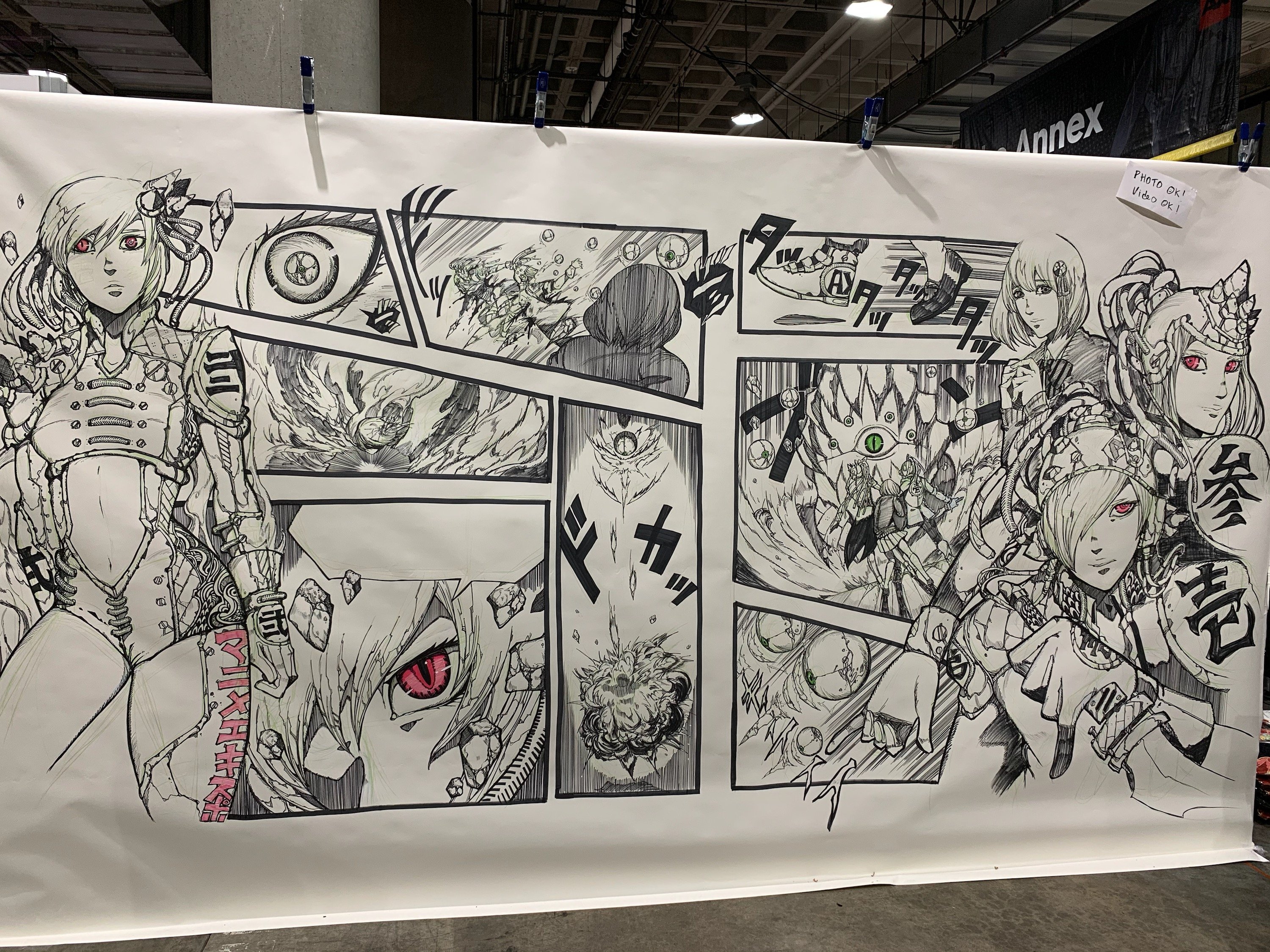 APA: I noticed that one of the heroes has “AX” on their shoe. Do the heroes represent anybody?

Uchida: Actually, I didn’t really think about it. [laughs] I often just put the logos on the back of character shoes. But well, you see the heroes getting defeated here, so maybe I’ll get in trouble if somebody finds out that AX is on the shoe. [laughs]

APA: No, no, I think it looks great! With where you’ve left off so far, you’ve already filled up the entire space with panels of the characters fighting. Does dialogue come last for you?

Uchida: When I draw overseas, I don’t think much about the dialogue since I only know Japanese.

APA: I noticed that you have an empty dialogue bubble here in the final panel. Will this be left blank?

Uchida: Actually, I’ve left that blank for now because this piece will be auctioned. The winning buyer can decide what they would like the character to say in that space.

APA: That’s a really fun way to personalize this piece. To wrap up, what would you like to challenge next as an artist? Creating a piece of work even larger than this?

Uchida: I would not want to draw manga taller than this. [laughs] But, I would definitely want to draw on a wider canvas. I want to do a world tour, where I can show people my live drawings in other countries as well.