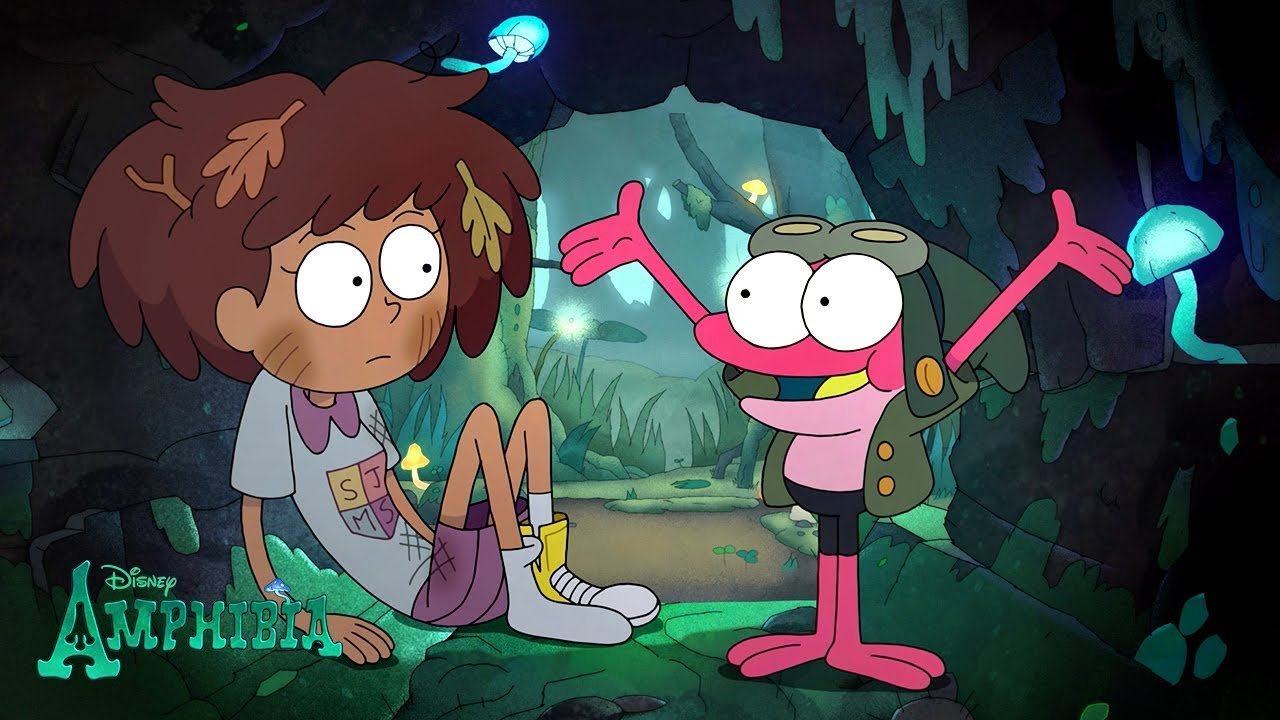 Following the advanced screening of Disney’s Amphibia, APA sat down to talk with series creator Matt Braly. The upcoming series features a Thai American girl named Anne, who finds herself in a mysterious new world and needs to find her way back home. Anne, voiced by returning Disney Channel veteran Brenda Song, marks yet another milestone in Song’s career. As for Braly, Amphibia is his first series after  working on popular titles such Gravity Falls, Big City Greens, and Steven Universe.

APA couldn’t be more excited to discuss Braly’s work as well as his insight into the creative process behind developing a series that explores one’s culture.

APA: How are you feeling after that screening?

Braly: I thought it was a great screening! I loved it! CAPE is such a supportive community. I cannot tell you how many people went to the event who were so excited about Anne as a character!

APA: And this is your first show where you’re leading the entire team.

APA: You’ve been in the animation industry for a while, working on other Disney shows such as “Gravity Falls” and “Big City Greens.” What are some lessons learned from past projects that you’ve taken to “Amphibia”?

Braly: Every show I’ve worked on, I’ve learned something different; it’s amazing. Working on Gravity Falls was a very different experience from working on Steven Universe, and that was a very different experience from working on Big City Greens. And all three of them had amazing insights to offer. For Gravity Falls, the biggest thing was just the nuts and bolts of storytelling. I really learned everything I know about it from my four years on that show. Alex Hirsch, the creator, is a great friend and mentor of mine. He was so good about making sure that you cared about these characters and what they were going through in every episode. So, those lessons I’ve taken with me.

APA: Can you tell me a little more about Anne? Will we get to see her friends sometime this season?

Braly: We have this awesome roll-out of the first season that you’ll be able to watch really soon. So I’ll say, absolutely. You will discover very early on in the show that her friends are, in fact, trapped in this world together and that they will, of course, meet.

APA: Going into Anne’s heritage, she’s Thai-American and her appearance is partially inspired by your grandmother. Within the episodes we’ve seen so far, she’s in this fantasy world. Other than the Lily Pad Thai restaurant episode, are there any other moments where we’ll see more of her culture?

Braly: You will! There are opportunities for flashbacks. We do have little peeks to her life back home before she gets zapped to Amphibia. One of which, we hear her mom speaking to her from off screen in Thai. Another one is a middle school flashback, so you’ll get to see her interact with other kids and learn more about the kind of girl she was back home versus the kind of person she is now in Amphibia.

APA: In the first episode, there was a praying mantis monster, and also the town that the Anne now lives in is filled with a variety of amphibians. You can tell by their clothing that some people have a little more money than others. Is there a message of environmental awareness and class?

Braly: Yes, absolutely! You are right to have keyed in on that idea. The characters that Anne interacts with will come from all walks of life. She’ll meet wealthy frogs and not so wealthy frogs and she’ll get to know each of them and get to know their stories. In terms of an environmental message, in a show like this, one can’t help but feel it regardless of it being overt. The idea of this character that doesn’t have technology anymore has to stop and appreciate the natural world around her. When she first gets there, she’s not really an outdoorsy type, didn’t really love camping back home, maybe didn’t really like getting her hands dirty. But by the end of the first season, you will see this character transform into someone that really appreciates her surroundings.

APA: She seems to be adapting pretty well to it, maybe not in the first episode, but definitely in the later episodes. Anne is very comfortable talking to the townspeople and revamping an entire restaurant by herself.

Braly: And they’re not blinking at her either by that time!

APA: Side question: she’s got leaves stuck in her hair and she’s still missing a shoe. Is this consistent throughout the entire season?

Braly: It absolutely is, and I’d love to speak on that. It’s funny because I had no idea who this would be a big sticking point to, but I’ve gotten so many questions like “Does she get the other shoe and when?” like it’s really important to them. What I will say to that is the idea that she has leaves and sticks in her hair and a missing shoe is all to support the idea that she feels out of place and that she feels bewildered. When you looked at her, you could conceivably think, “Oh, this is a person that’s been zapped to another world!” If she had clean hair and both shoes, if you saw her separated from the backdrop of this world, you would just be like “Oh! She’s an ordinary schoolgirl!” from a cartoon that takes place in a school hall. So for me, it was a conscious effort to make sure that Anne always felt a little bit out of her depth.

APA: Let’s dive more into the Asian-American cultural movement that’s happening, especially with this show. She’s Thai-American, but she’s also not light skinned, which is often what we see in media. This show is not afraid to show it, but at the same time it’s not put on a pedestal in the sense that it’s not uncomfortably highlighted. It’s very natural and seamless. Anne herself is just a normal character, just like everybody else.

Braly: That’s a great way of putting it and I think Brenda put it beautifully in an interview once. She did mention that what Anne really does is normalize the idea of this dark skinned, Asian-American character. Hopefully, you won’t even think about it, you’ll just enjoy the show, enjoy the adventure, that you’ll like the character, and that will be it! And then the icing on the cake is that her culture does come through occasionally on the show. Her tanned skin was something that was incredibly important to me. I’m mixed; my father is Caucasian, and I myself am not, but my mother is incredibly tan, as are my cousins, my aunts, my uncles, my Thai side of the family. And it’s something that my mother was a little self-conscious about growing up.

APA: It was really exciting to see the pad thai episode, and during the screening, I think the people in the audience were very thankful to see that in the show.

Braly: I think you put it really well when you said it’s no big deal. It’s very organic to the story. We’re not awkwardly trying to shine a spotlight on something; it just happens to be this.

APA: “Amphibia” seems to have a lot of cross media collaborations, such as the YouTube shorts later this year and the game that’s coming soon. How involved are you with the entire universe of “Amphibia”?

Braly: We did produce the shorts ourselves. There was a department at Disney TV that primarily dabbles in shorts content, and they’re the ones who approached us with “Hey! We’ve got this great idea for your shorts! Would you be interested?” and we said, “Yes!” and so we produced together with that team. I’m really happy with how they turned out! They’re 30 seconds each; they’re very physical comedy oriented, and we got to do some visual gags and jokes that I don’t think we would’ve been able to do in a full 11-minute episode. So to that end, they were really exciting.

Now the game, full disclosure, I’m a huge gamer. I love that stuff. It’s my one hobby and guilty pleasure. It’s really funny because a lot of people ask me if I want to work in video games and I just say, “No, absolutely not!” When your hobby turns into your work, it just becomes something entirely different. The game was made by a studio called Working Man Studios, and they’ve created this game that has a self-contained story. They pitched it to us and we really liked it! It feels like a lost season 1 episode of sorts and is quite a lot of fun. Our involvement was a little bit lighter; we basically just looked at some designs and provided some dialogue to them, which I’m very proud of. It’s very snappy, provided by one of our writers, Adam Colas. I’m excited for the game to come out! Basically, we did produce the shorts, and the game we lightly supervised, but it was generally handled by the developer who did a great job!

Special thanks to Vivian Phu for transcribing the interview.