The series already has a second season green-lit even before the premiere of its first season, and from what I saw of the episodes, it’s a show worth getting cable for. Song’s comedic delivery of Anne’s quirky personality will draw in sharp contrast with the dramatic reveal of how Anne finds herself in a new froggy world. 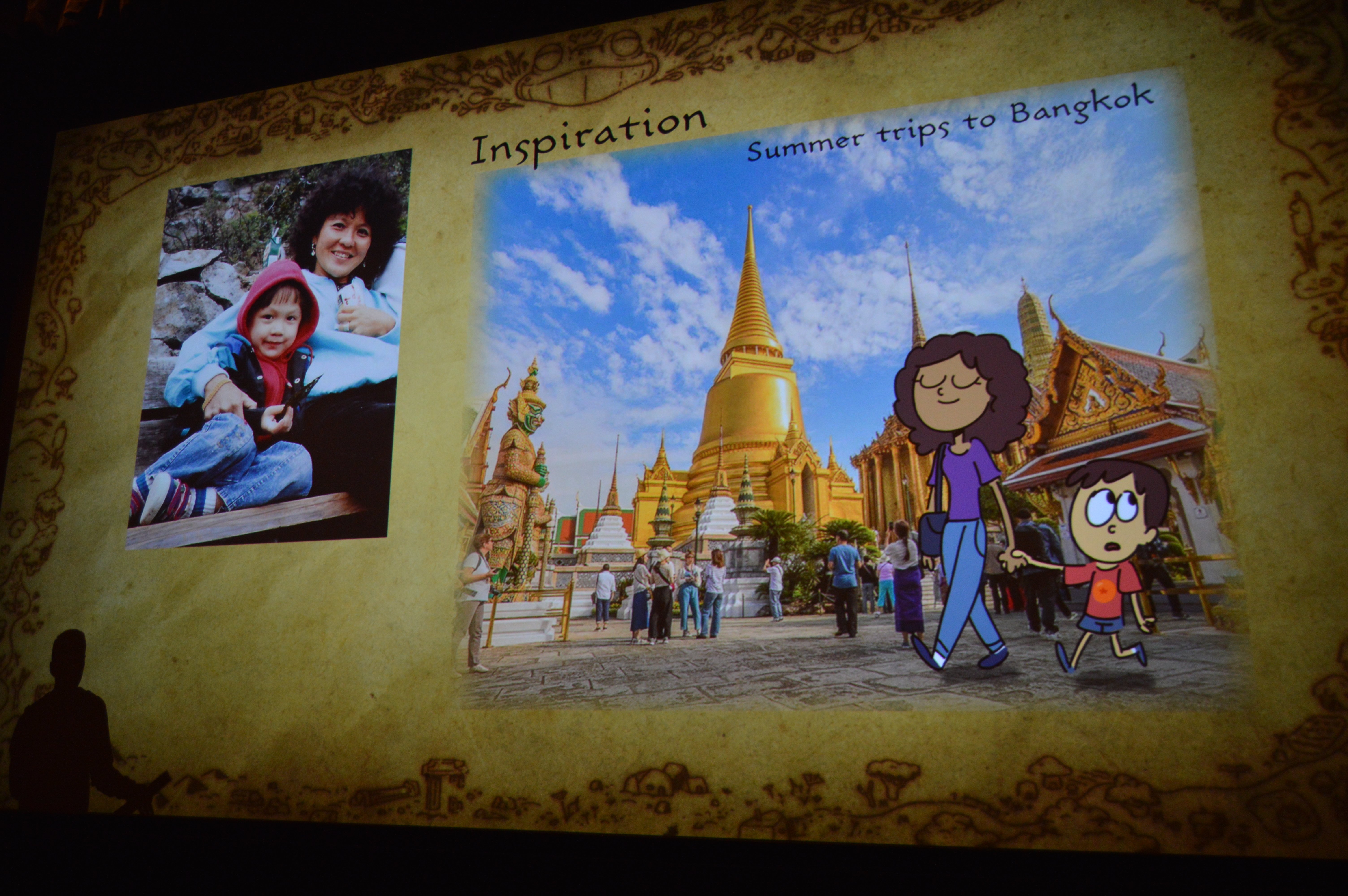 At an advanced screening for Braly’s new series, he shared anecdotes about his summers in Thailand and the relatable experience of feeling like a fish out of water around his relatives. As a mixed-race Thai-American, Braly is proud of his heritage and his experiences were a major influence in Amphibia. Family is central to Braly’s work, as Anne is loosely based off Braly’s own grandmother when she was a child, and later episodes will feature his mother speaking a line in Thai.

The core inspiration for the project was my family. My mother is Thai, and every summer she would take me to Bangkok, Thailand for these summer trips. And as an American kid from Sacramento, California, I was very much a fish out of water every time she’d bring me. I don’t know who’s been to Bangkok before, but it’s a very different place. The humidity hits you like a brick wall once you get off the plane. The food is incredibly spicy, I am very bad at eating spicy food, which is very embarrassing for a Thai person. The language, my cousins all spoke Thai and didn’t speak much English. As a kid, going there really was like being transported to a completely different world. So, when I was looking to start my own show, looking for inspiration, I looked back on those days and this magical experience that would happen without fail. I would arrive in Bangkok, I would be very unsure of myself and very uncomfortable, but by the end of the trip, I didn’t want to leave. It was a little bit like magic and it was a transformation that happened every year.

I was looking to bottle up that sensation and make a show out of it about this character who lands in this very unfamiliar environment, in Anne’s case, a completely different world. And slowly, but surely, she becomes accustomed to it. It grows on her, you could say. Not only that, but some inspiration from the main character’s design, especially her hair, is from my a photo of my grandmother from the 1920s. My grandmother passed away four years ago, she’s no longer here and unfortunately can’t see the show, but she lives on very much through Anne. What I’ve always loved was her wild-child hair and the fierce look on her face. I always had this photo on me and thought “Man, what a great character!” So this really was a great source of inspiration for me when moving forward with Anne and her character design. My grandmother was an amazing woman. She was a woman of very few words, but her laughter could light up a room.

In the two episodes shown at the screening, Amphibia introduced the audience to a fantasy world, where praying mantises are as big as trees and amphibians live in a class system. Braly mentioned he was heavily inspired by Jim Henson’s “The Dark Crystal” and The Hobbit animated series, stating that those fantasy elements were translated through “the grimy, earthy, crunchy feel” seen in the world of Amphibia. 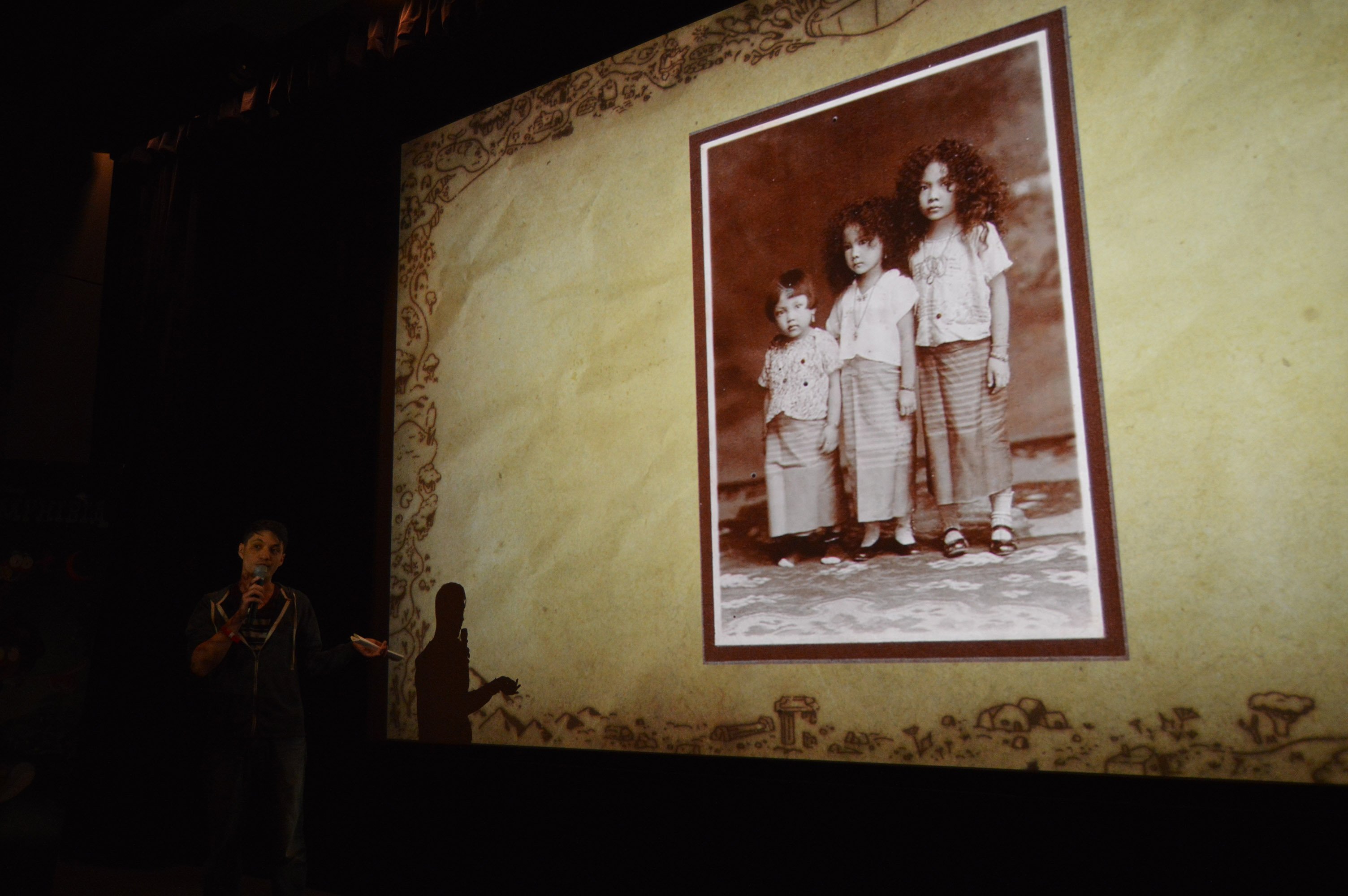 Through some subtle jokes involving food critics, Braly elegantly highlighted some of the common experiences that Asian Americans face in America, which is something the audience (filled with CAPE members) could easily relate to. A Thai audience member shared how grateful and thankful she was to see a Thai person on screen, proving once again that #RepresentationMatters.

Writer Gloria Shen talked about her experiences growing up as the only Asian in her town, contrasting the experiences of people who grew up in SoCal’s San Gabriel Valley. As one of the few Asian women in the writers circle, Shen spoke to how her writing reflects her childhood and how she views the marshland setting in the animated series. After the screening, both Shen and Braly opened up questions from the audience. APA was lucky enough to ask the one below:

Gloria Shen: I really gravitated towards it. I started out writing for adults and I think I resisted writing for kids for a long time, feeling wrongly that it was not as rich of a world. I think it’s almost more fun because I can drop in those winks to the audience. All of my friends with kids are asking if I can write something that they can show to their kids without ripping their hair out, so I’m definitely thinking about that. My background isn’t in gaming or animation. I like sports and pop culture and all that stuff so I like to drop in those kind of reference for anyone that’s watching. So anything that kids and adults will get and enjoy. Kids are much more mature in their understanding than we sometimes give them credit for. So I don’t feel like I’m dumbing down my writing, I’m just writing something that’s funny. I think that you have to try extra hard to not be lazy about your jokes and write something that’s well crafted that’ll make anyone laugh who’s watching it.

Matt: Gloria is the master of slang. I’ve learned so much new slang from you from reading your scripts. I didn’t know this was an expression! Like when you go “Obvi” when something’s really obvious and it makes sense, but reading it, it’s like “I think there’s a typo.” Your writing is incredibly specific and that’s what makes it so good. For my part, I will say that even though our comedy is broad, we do our best to write stuff that we also think is funny. I’ve always gravitated towards that Pixar mentality of “everyone should be having a good time”. Kids should be challenged and adults should also be engaged. If it’s just for one and not the other, someone’s going to leave the room, and that’s sad.

Amphibia will be the newest edition to Disney’s lineup of Asian led stories: from Andy Mack (which will sadly be ending in July 2019) to Mira, Royal Detective (coming 2020). The series premieres on Monday, June 17th at 10am, where audiences can watch on Disney Channel and DisneyNow. For those who are interested in more sneak peaks, Matt Braly’s Twitter account (@Radrappy) shares the hard work that goes behind the show.

Special thanks to Vivian Phu for transcribing the panel and the Q & A session.