Better known as Dumbfoundead, rapper Jonathan Park hosted his first live podcast, Fun With Dumb, at the Hayworth Theatre in Downtown Los Angeles. On his weekly podcast, Dumbfoundead interviews prominent entertainers and media figures. On May 31st, the special live podcast was hosted for the Spotify Asian Community Engagement (SpACE) to celebrate the close of Asian Pacific American Heritage Month. 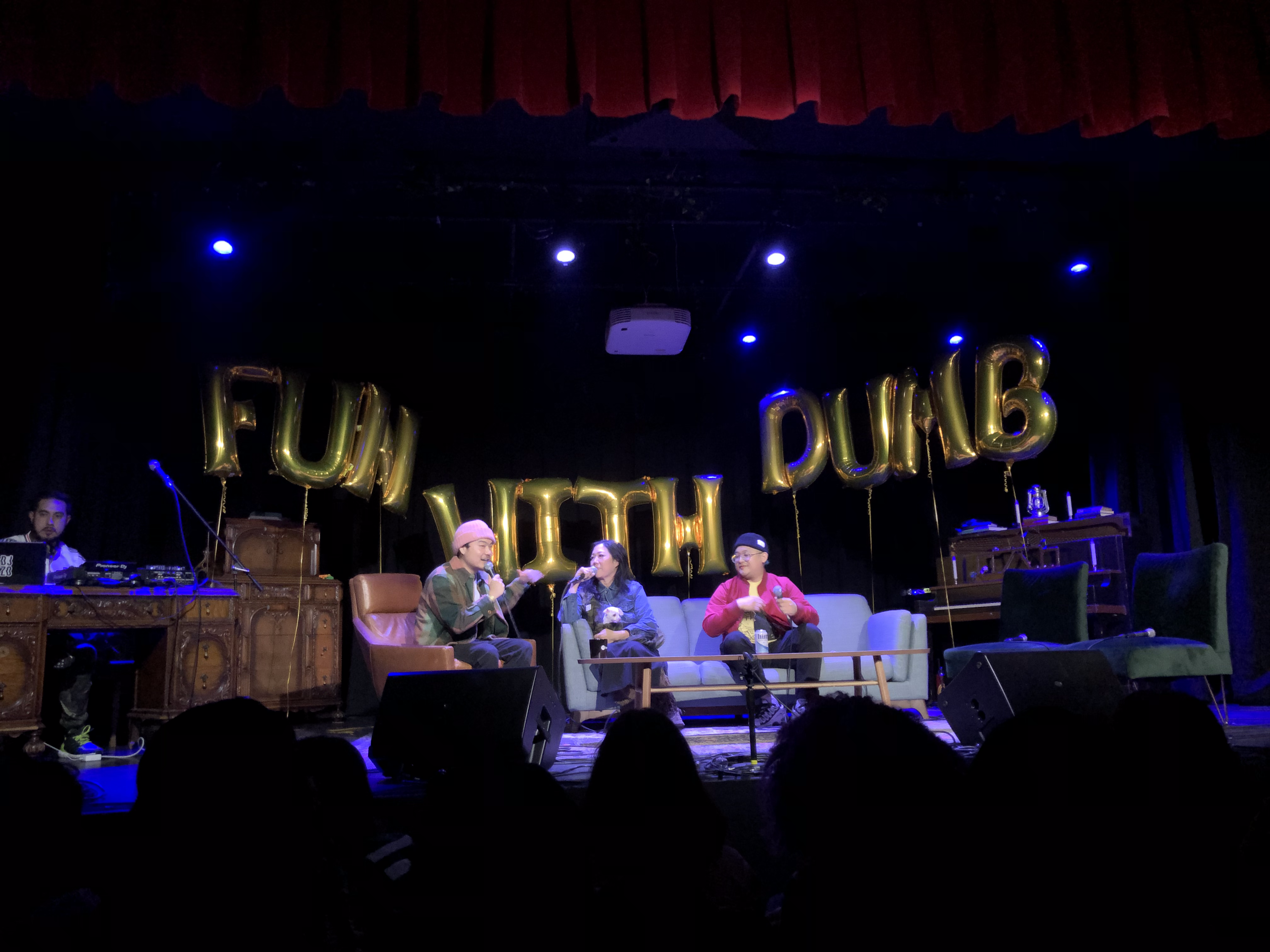 Guests Margaret Cho and Far East Movement (James and Kev) opened the show with anecdotes on their experiences as Asian Americans in a space dominated by non-Asians. The vibe was casual as fellow rapper Rekstizzy vaped on stage and the crowd laughed along with his questions. Dumb then steered the conversation into a story from his childhood when his mother first caught him with a bong. Fortunately, he stopped her from smashing an important piece of equipment by reminding her, “Mom, that’s expensive.”

Returning the conversation to Asian American experiences, Cho opened the discussion on APAHM with the 15-year celebration of All-American Girl, which was the last time America had seen a sitcom with a leading crew of Asians. Joy Luck Club also fell within the same year, to which Cho mentioned she was excited for the growth and blossoming of Asians in entertainment since then. After nearly a decade and a half later, this is clearly not the case as this potential somehow fizzled out. But Cho and Dumb sounded hopeful with the rise of Crazy Rich Asians and the worldwide sensation of K-pop, emphasizing the sustainability that the community didn’t have before.

On the opposite end of the spectrum, Cho and co. shared their challenges with being Asian American in the entertainment space. In a tough exchange with ABC staff who wanted to change Eddie Huang’s Fresh Off the Boat, due to the title sounding “racist,” Cho jokingly suggested they could rename it Dimsum Lose Some. Thankfully, Cho and Huang had won the battle and convinced the network to keep the name.

Halfway into the show, James and Kev from Far East Movement approached the stage to join the conversation. Their first big break had come from Justin Lin who fought tooth and nail to keep their song in The Fast and the Furious: Tokyo Drift. Despite the popularity of the track within the movie, general audiences would often mix up Far East Movement’s “Round Round” and Teriyaki Boyz’s “Tokyo Drift.” What’s worse is that security would sometimes not allow FM into their own concert because they didn’t look the part of headlining musicians at the time. 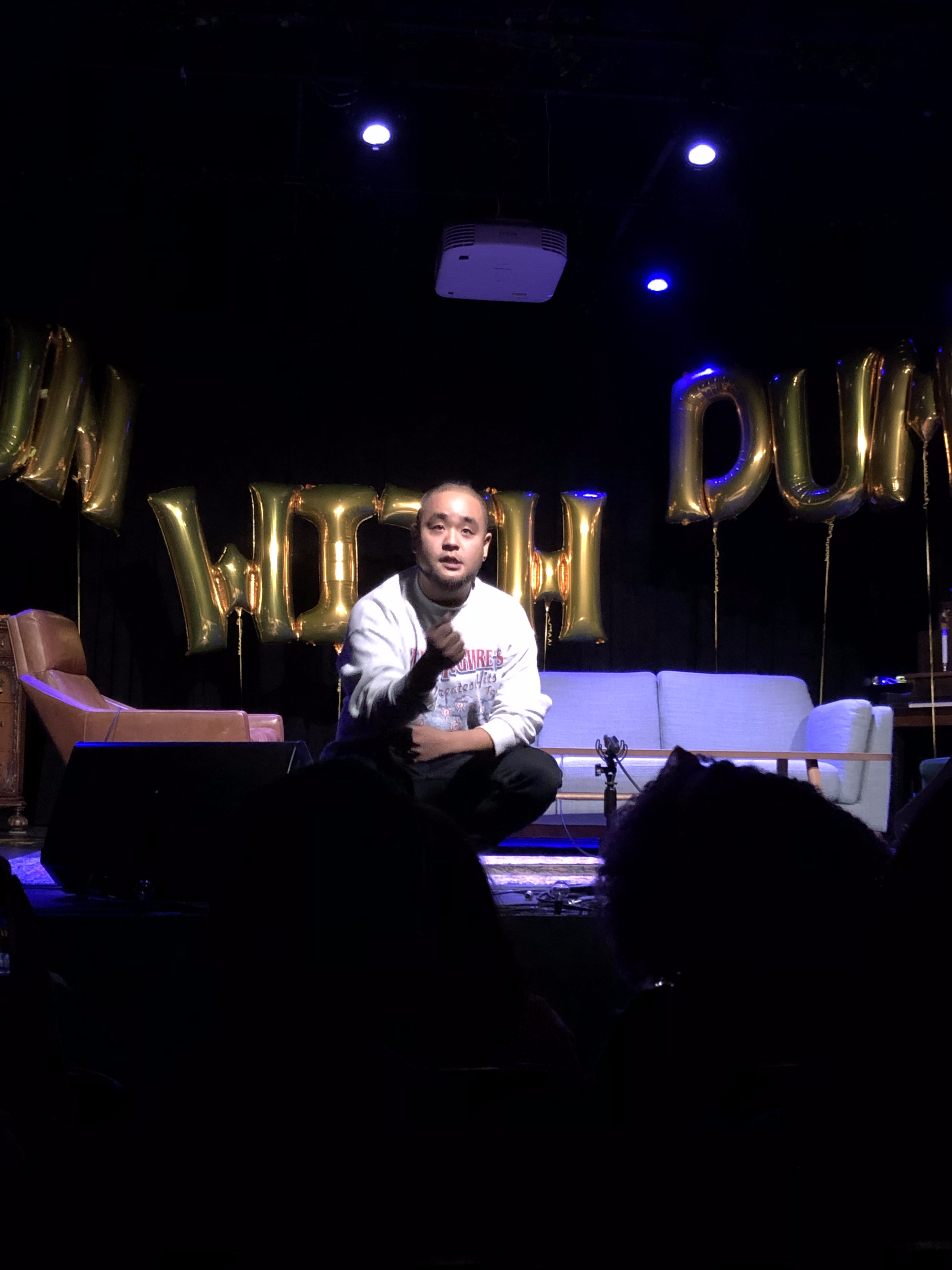 The hosts closed the show by sharing their thanks of the popularity of Asian American led movies/shows, and asked for the continued support of the audience, so that these projects can keep succeeding. The show closed with two live performances by guest artists, G. Yamazawa and rapper dup YEAR OF THE OX. Both artists delivered powerful acapella raps with lyrics heavily dipped in meaning. Words cannot describe how emotionally moved the crowd was, however, you can take a listen for yourself as the show is now up on Spotify under Fun With Dumb.

There’s no word yet on whether another live show will happen, or if Spotify will continue this trend of supporting live creative shows such as Fun with Dumb. In a world where clicks and voices are power, the only way to let Spotify know is to listen in and throw suggestions their way.