Skip to Content
Home Interview FanimeCon 2019 with The Beat Garden

As headliner at FanimeCon 2019’s MusicFest, four-member Japanese group The Beat Garden made their debut overseas performance at the City National Civic in San Jose. Comprised of three vocalists and a DJ, the group made their major debut in 2016. While embarking on their largest national tour, the group finished up a show in Japan on Friday night before flying into California to put on their first show in the states the following night. Despite the tight turnaround, the members enthusiastically took the stage and brought the crowd to its feet with their infectious energy and melodies.

After completing a successful show, APA chats with U, Rei, Masato and Satoru of The Beat Garden to discuss their origins, first U.S. performance and new music. 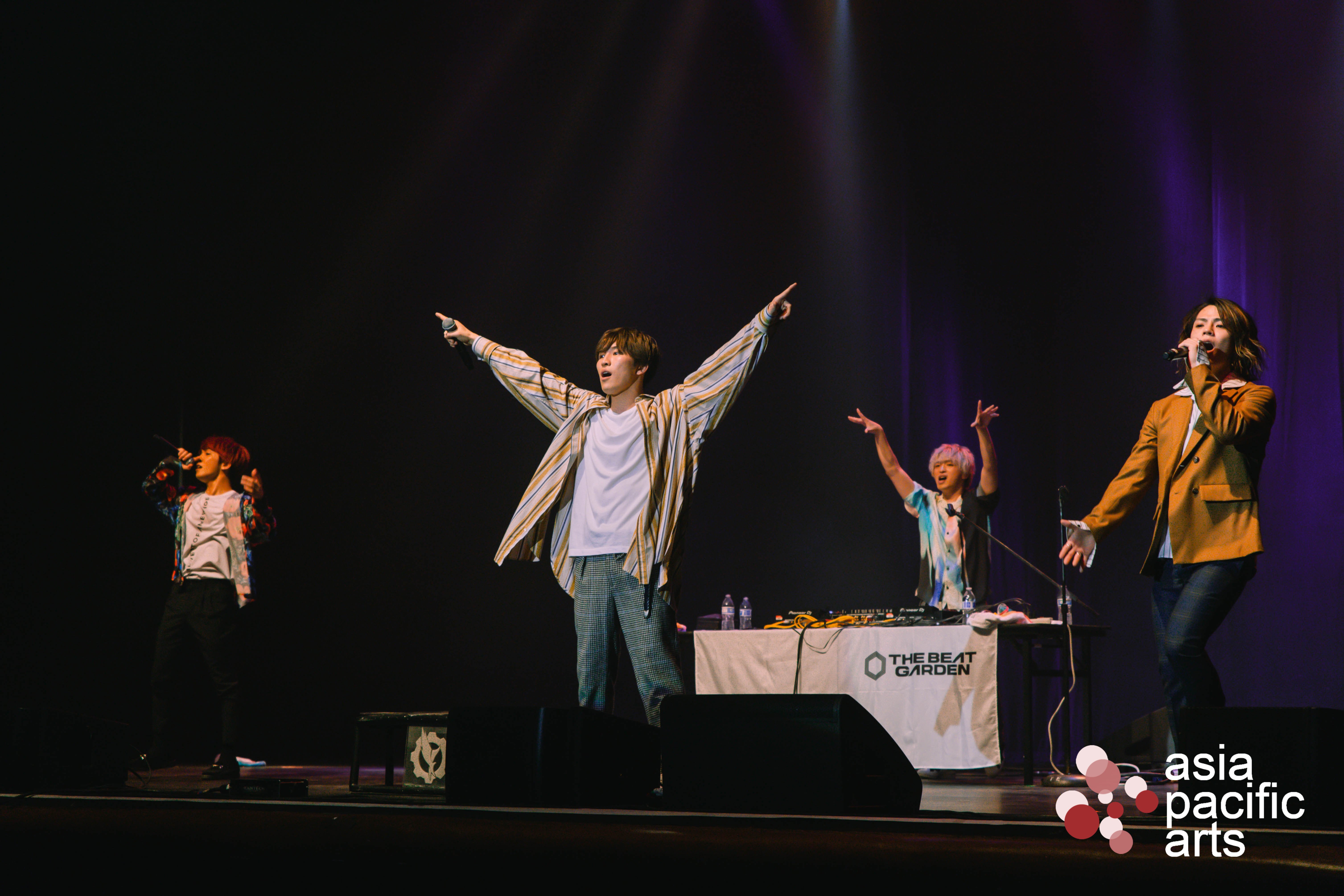 APA: You’ve had a packed first day in California. How was the flight over? Any jetlag?

U: It was totally fine. We always travel around by car for performances in Japan. Sometimes we sit for 15 hours straight, so we’re doing fine.

Satoru: Actually last night, I only slept one hour. My eyes suddenly opened after an hour and I took a shower.

APA: Congratulations on completing your first overseas performance! How are you guys feeling?

Masato: In one word, it was the best.

APA: The crowd was really fired up. Now that you’ve met your Californian fans, did you feel like they were any different from your Japanese fans?

U: We call all our fans Beemer. Usually Japanese people are shy but Beemer are very energetic. It’s like they feel our music more. Californian Beemer were always cheering with us, whereas Japanese Beemer have times when they are quietly listening, but they also cheer at times. Regardless of these slight differences, we are really happy to see Beemer enjoy our performance.

APA: In “Side Dish,” you taught these moves you called “hamburger” and “fries.” The audience really took a liking to that. 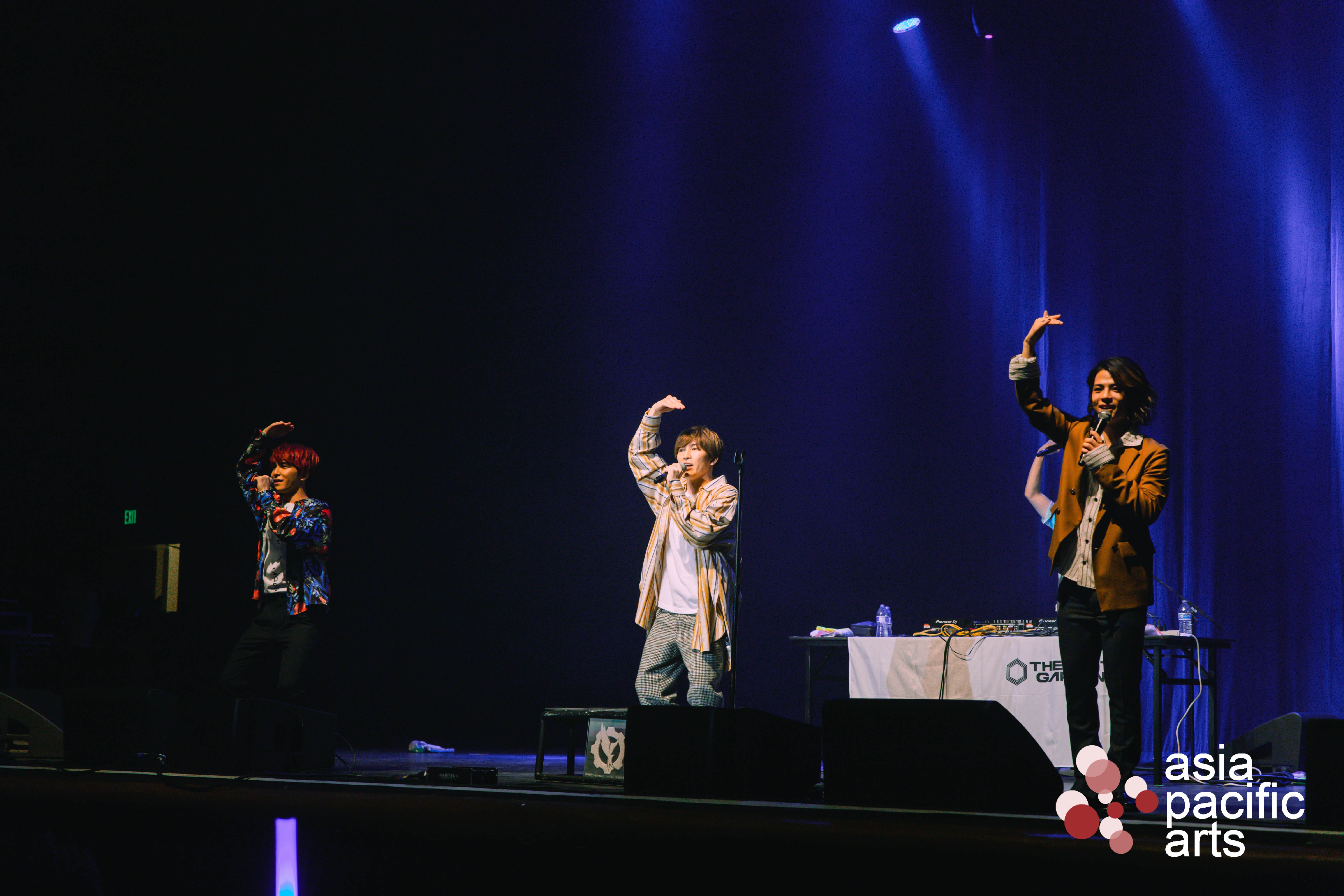 APA: During the show, you performed a song that was not yet released at the time, “Start Button.” That song is on your new single titled, “Nukumori (Warmth).” Can you tell us more about this single?

U: “Start Button” is a song that will be featured in the Final Fantasy XIV live action film titled, “Dad of Light.” The theme of the lyrics is that everyday in your life, there will be good and bad things, but you won’t stop. This is a song we wrote about how everyday we begin another day by pressing the “start button.”

The other song is “Nukumori (Warmth),” which will be the first time we’ve had a song feature as a theme song for a drama. The show is titled “Toritsu Mizusho: Reiwa” and it’s about a teacher who tries to help delinquents at a trade school. As the teacher is very strict and straightforward, the students find him persistent and annoying, but the students begin to realize the warmth they receive from their parents and teacher. We wrote a song that would reflect these feelings.

APA: After last night’s performance, I’m sure you have a number of new fans. Let’s make a playlist for them! What songs do you recommend for listeners when they’re happy?

U: Can we start with sad?

U: I would say “Dancing Man” because when you listen to it you can’t help but feel happy! Like for Japanese people when they are on their commute to work on the train, I think it would really bring their energy up. And another song would be “Ano Ne.” The song is to let people who feel like they are no good know that their existence is meaningful. I think that if you’re feeling sad, this song will make you feel happier.

APA: What about when you’re happy?

U: Hmm… that’s tough… I’d say “Side Dish”? It’s actually a song we don’t perform often in Japan, but we thought it would be perfect for America. It’s a song that we really like and even we wanted to hear it. I think it’s a song people would want to listen to when they’re happy.

APA: When you exercise?

U and Masato: We’d say “Flower” and “Answer.” They both have high BPMs, which would match well with running.

APA: When you want to confess to someone you like?

Masato: It has to be “Hanabi (Fireworks),” right?

U: The song’s pretty straightforward. [sings] “I like you~” 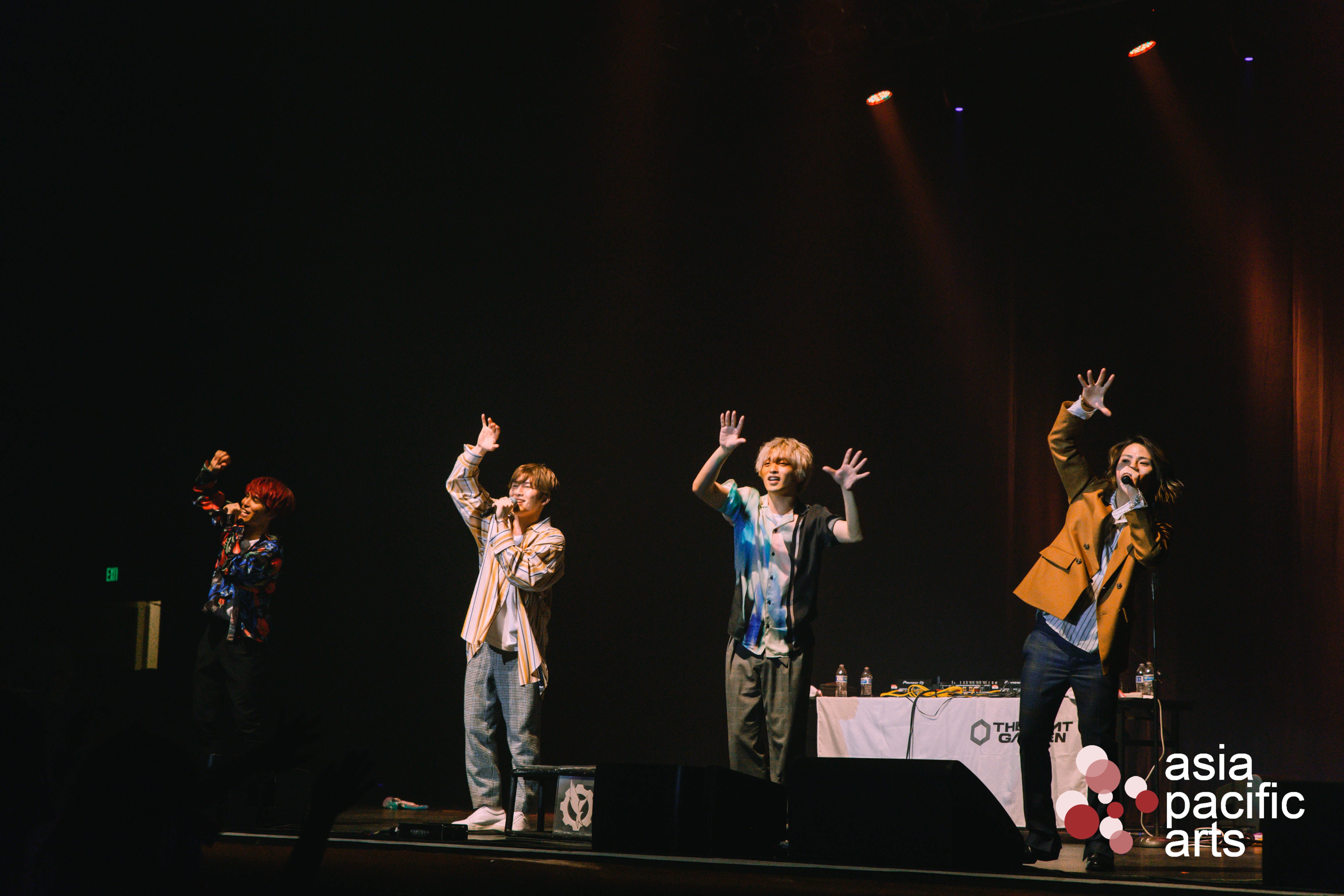 APA: Since you’re all here for Fanime, do any of you like anime?

Satoru: I like Detective Conan. I watched it a lot since I was little and I still watch it now. [laughs] I haven’t become an adult yet. [everyone laughs]

Rei: Did you see [any cosplay at the convention]?

Satoru: I didn’t see any!

APA: Unfortunately, Detective Conan isn’t as big in America as it is in Japan.

Masato: I’m really into foreign shows like Game of Thrones. Yesterday, I saw some people cosplaying as characters from the show and their outfits were really cool.

Masato: Really? There were tons!

APA: What about anime?

Masato: Well, I like Pokemon. I’ve also liked that since I was a kid. They have a live action film of it now, don’t they?

APA: That’s right. Detective Pikachu! Has anyone seen it?

APA: The American take on Pokemon is really different, isn’t it?

Rei: It was really fresh.

U: As for me, it’s Dragon Ball Z. I have Goku’s outfit. On my birthday, my friends gave it to me as a present, so I wore it and we drank a lot. [laughs]

Masato: How about doing a Kamehameha now? [laughs]

Rei: I like Attack on Titan and One Piece. I watch it every week. I also watched all of Tokyo Ghoul on Netflix. It was really interesting.

APA: You’ve released a song for an anime before titled “Walk This Way.” If you were to make another anime song, what series would it be for?

U: We actually talked about this yesterday. We thought that it would be even more fun to write an opening song for an anime that we all like. Naruto would be cool. Tokyo Ghoul? Hmm… that might not be fit. Shall we pick Naruto?

U: OK, so Naruto? What about Pokemon?

Masato: That would be good too. Kids would like it.

Satoru: What about Ashita no Joe? [laughs]

U: Not Ashita no Joe. [laughs]

Masato: That would be good for 50-year olds. [laughs]

U: OK, we’re picking either Naruto or Pokemon. [laughs] or Gundam. 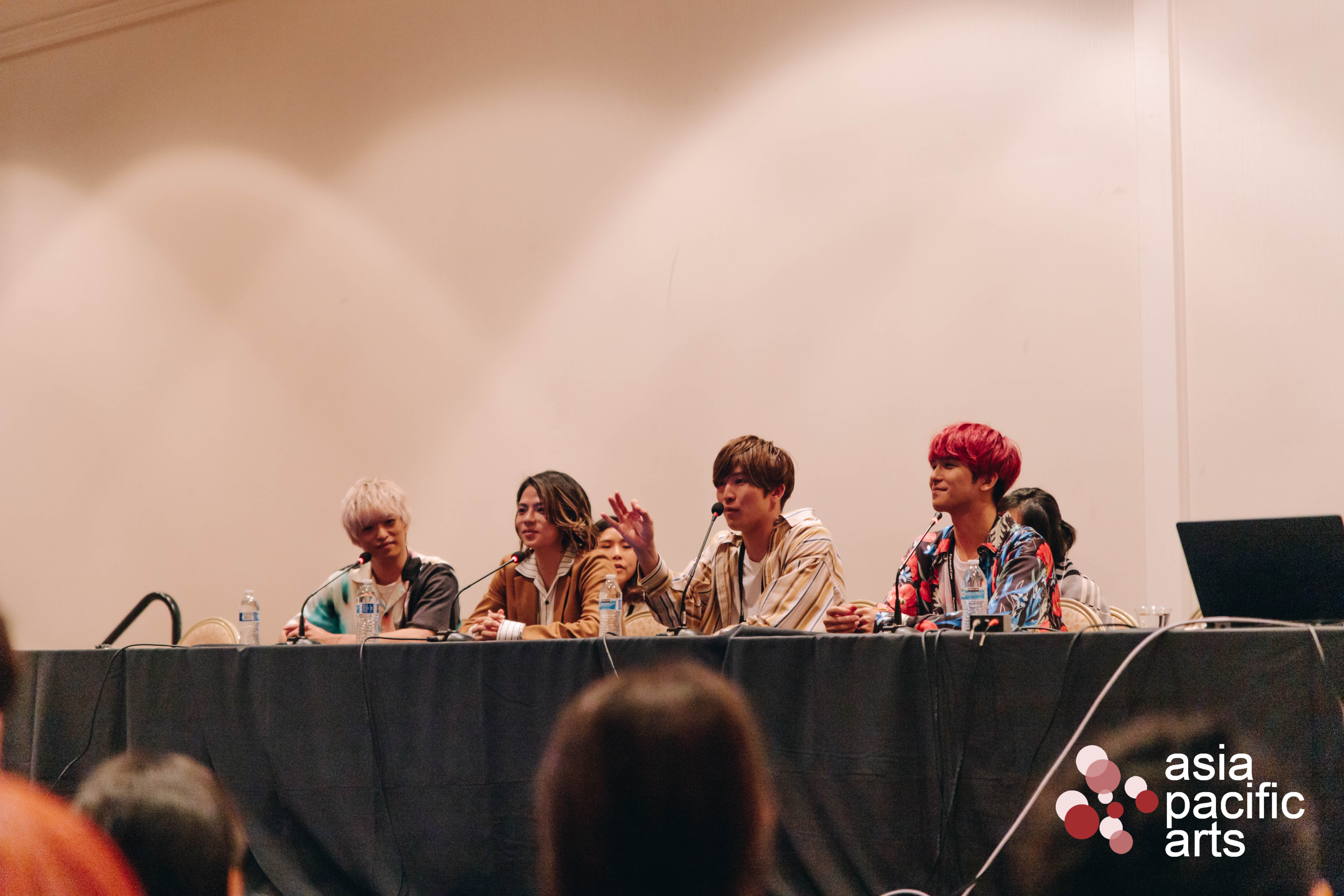 APA: For American fans to get to know you better, let’s talk about your beginning. How did the group form?

U: We actually were all friends. Rei, Masato and I met at a music school in Osaka. We made one song together that was received really well and we decided to form a three-member group and go to Tokyo. Satoru is a junior from my hometown and originally, he wasn’t of the DJ style. He did a variety of genres of music like electric and rock, but wanted to be a DJ and I invited him to join the group.

APA: What were your first impressions of each other? Be honest. [laughs]

Masato: To me, Rei had the aura of a star. [laughs]

Rei: That makes me happy. [laughs] Since I’m the youngest of the group, when I met these two [U and Masato], I thought they were like my older brothers. I would always depend on them like “Masato, Masato~” “U, U~”

U: I remember when I showed my lyrics to Rei back then, he’d say “No!” and reject my work. He very much so goes at his own pace. He’s a “my pace” boy.

As for Masato, I think we were at some burger place talking about love.

Masato: Ah, talking about who we liked.

U: They really were my friends. They were like my younger brothers. As for Satoru, we met in high school. What was that like? Well, he’s really good at driving. [laughs]

Satoru: For these two [Masato and Rei], I met them when I was helping out with their live performances as staff. We would just greet each other and we were a bit shy around each other.

As for U, well, I didn’t like him that much at first. [laughs]

U: We worked together part-time before. I didn’t really work hard. [laughs]

Satoru: He just played around and didn’t work at all. [laughs] But, we eventually became friends.

APA: Has anything changed from then?

U: I’d say that nothing’s really changed, right? Well, I’m actually really selfish, but when we first met, I didn’t let them know about it. Now that we’re close, they know my selfish side and they say they’ve been deceived by me. [laughs]

APA: Can each person tell me what they think they’re the best at in the group?

Masato: I am the sweatiest!

Masato: When we’re performing live like one song into the show, I start sweating.

APA: Can you drift?

U: In Japan, he does hold a circuit record for an artist though.

APA: That’s pretty cool. Masato, do you want to change your answer to something cooler?

APA: That’s right. Because you’re confident in yourself. [laughs]

Rei: I can sleep anywhere.

APA: Wow, me too! [everyone laughs] What’s the weirdest place you’ve slept?

Rei: Once I slept on a stairway with only my head against the wall.

U: As for me, I’m the kindest. [everyone is silent]

Masato: He’s the most selfish.

APA: Of course, as the leader.

U: I really like talking. Even in Japan, I’ll talk to foreigners really easily. 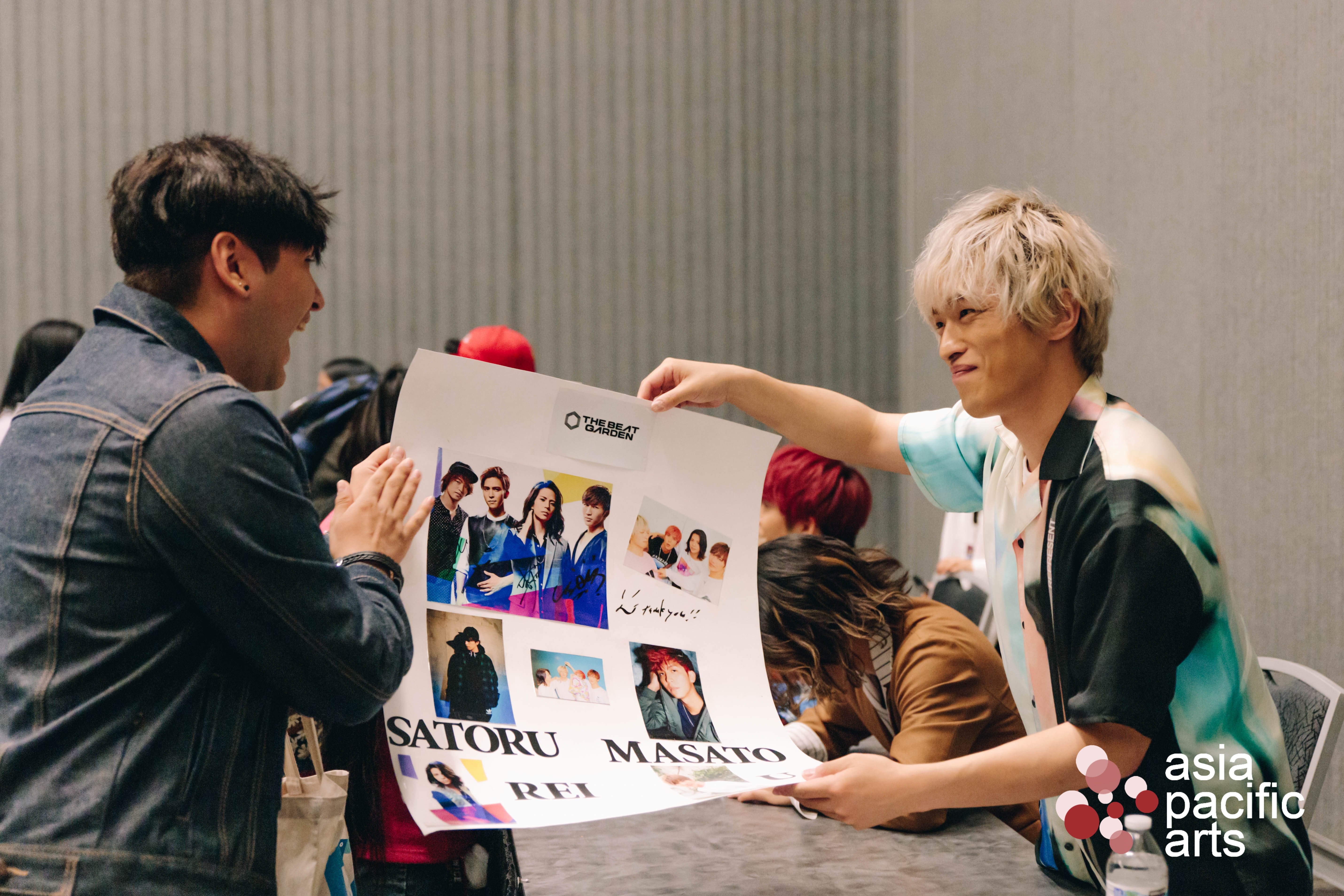 APA: You’re working on so many different projects already with the new single and tour. Anything else in the works?

U: We’re working on producing more music. After we finish the tour, we hope to perform at a really big livehouse. We’d also like to learn more English and return to the U.S. or get invited to perform here again.

APA: Would you say that’s a plan?

APA: After wrapping up Fanime, is there anything else you’d like to do in California?

Masato: I’ll have to come next time!

Satoru: I want to see Major League Baseball. There isn’t a game tomorrow, but I think there are minor league games.

APA: Will you be going to San Francisco tomorrow?

Satoru: We’re flying back the morning after tomorrow.

Rei: I want to eat famous food here. Do you have any recommendations?

APA: For San Francisco, it would be seafood like crabs or clam chowder.

U: I want to go to Blue Bottle and Starbucks.

Masato: We have that in Japan though.

U: Yeah, but it’s different here. Like the sizes. Venti, tall, grande and trenta! The trenta! I want to try it.

APA: Hopefully, you’ll have time to enjoy California a bit before you head back! To wrap up, can you send a message to your American fans?

U: To most of the American fans, I think all of our music is very new to you. Despite that, we’re really happy that you enjoyed our music with us. Now the goal we’re thinking about is creating a song for an anime you all like and returning to see you all. It’s a promise that we’ll be back to see California Beemer, American Beemer. We really look forward to seeing you again!

Click on the photo below for more of our photos of The Beat Garden from their concert and activities at FanimeCon! 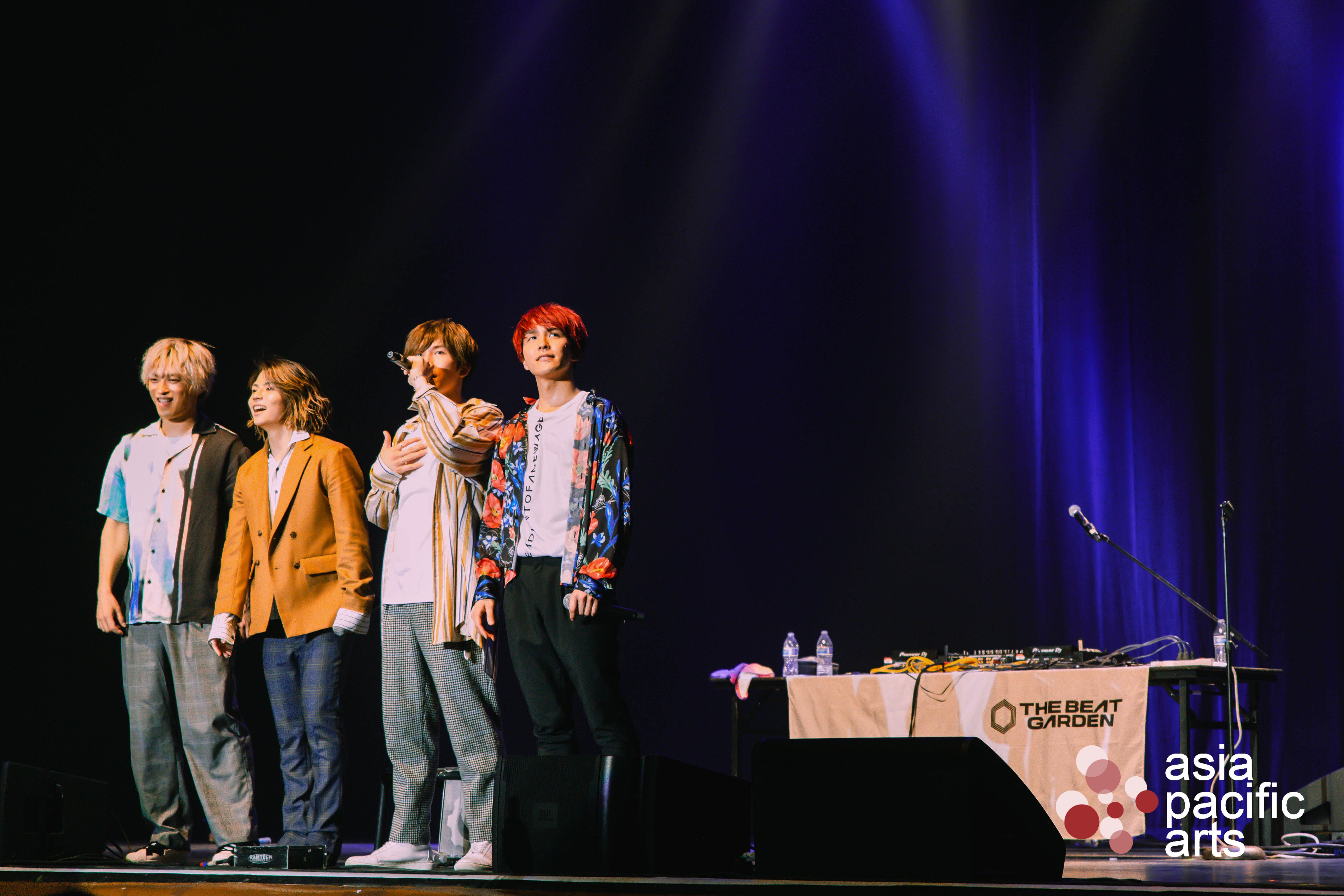