As Perfume makes history as the first female Japanese group to perform at Coachella, the trio takes some time in between their music festival performances to put on their first show in San Jose at the City National Civic.

Opening with a glitching video of a moving timeline, it takes attendees through Perfume’s discography since their major debut in 2005. As it moves progressively closer to the present, the robotic voices and beeps start coming together into a rhythmic melody that gradually speeds up, seamlessly leading into the show’s first song and title of the tour, “Future Pop.” Wearing long sleeved blouses underneath dresses made of silver and blue vinyl, the group literally looks like they came from the future. Performing in front of screens projecting digital versions of themselves dancing from constantly changing angles makes the girls seem larger than life. The stage production is overwhelmingly big, bright and loud in all the right ways which naturally envelopes you into the group’s unique “Electro World.” Sure, you might have been to a rave before, but Perfume’s futuristic world is truly from another dimension. Simply put, nobody puts on a show like Perfume does.

With captivating visuals lighting up the stage, the group turns up the bass and has the crowd feeling vibrations in electro pop-meets-future bass track, “If You Wanna.” The girls entice attendees with their smooth yet sharp moves for a dance performance to “Fusion” that is perfectly synced to projected visuals. The girls then sang “Tiny Baby” to the crowd through phones mounted on mic stands, which were projected on screens as if the girls were Facetiming with the audience. On top of that, digital effects interacted with the girls like Snapchat filters, demonstrating Perfume’s efforts to incorporate the latest technology to their shows.

One of the highlight performances of the night was “Butterfly,” which perfectly embodies Perfume. As the song is all about the beauty of a butterfly, the group represents the fragile creature through gentle, fluid choreography, yet the autotuned delivery of the song is matched with screens displaying the word “butterfly” repeatedly in monochromatic and pixelated font along with the romanized lyrics as if typed on a computer in time with the song. Although the girls leave the stage in the middle of the song, production takes the spotlight, delivering entrancing visuals and a light show that effortlessly holds viewers’ attention.

Perfume returns to the stage in gorgeous new outfits, dresses stitched together with geometric pieces of crimson, fuchsia and lavender fabric, to perform “Secret Secret.” After traveling through all kinds of futuristic worlds, Perfume takes attendees soaring over one familiar place, Tokyo, with “Tokyo Girl.” Over lit landscape and towering skyscrapers, the group performed among beaming lights, spanning across the venue. This marks the move into the final songs of the show, with production focusing more on hyping the crowd excitement through shooting intense lasers into the crowd.

Moving through the some of the group’s top hits, Perfume performs “Pick Me Up” and surprises fans when they tear off their dresses to reveal all white dresses underneath and perform “Fake It” in red lights blanketing the stage while lasers blast into the venue. Without missing a beat, the group jumps into “Flash” and gets cheerful with “Chocolate Disco” as rainbow lasers color the crowd.

In response to calls for an encore, Perfume returns to the stage with renewed energy to perform “Magic of Love.” In a rare moment, the group performs with simple lights onstage revealing the girls as they are with no bells and whistles. To end the night, Perfume yells into the crowd, “We are all a part of the future!” and finishes off with the emotive “Mugen Mirai (Endless Future), leaving the audience excited for what Perfume has in store for the future. 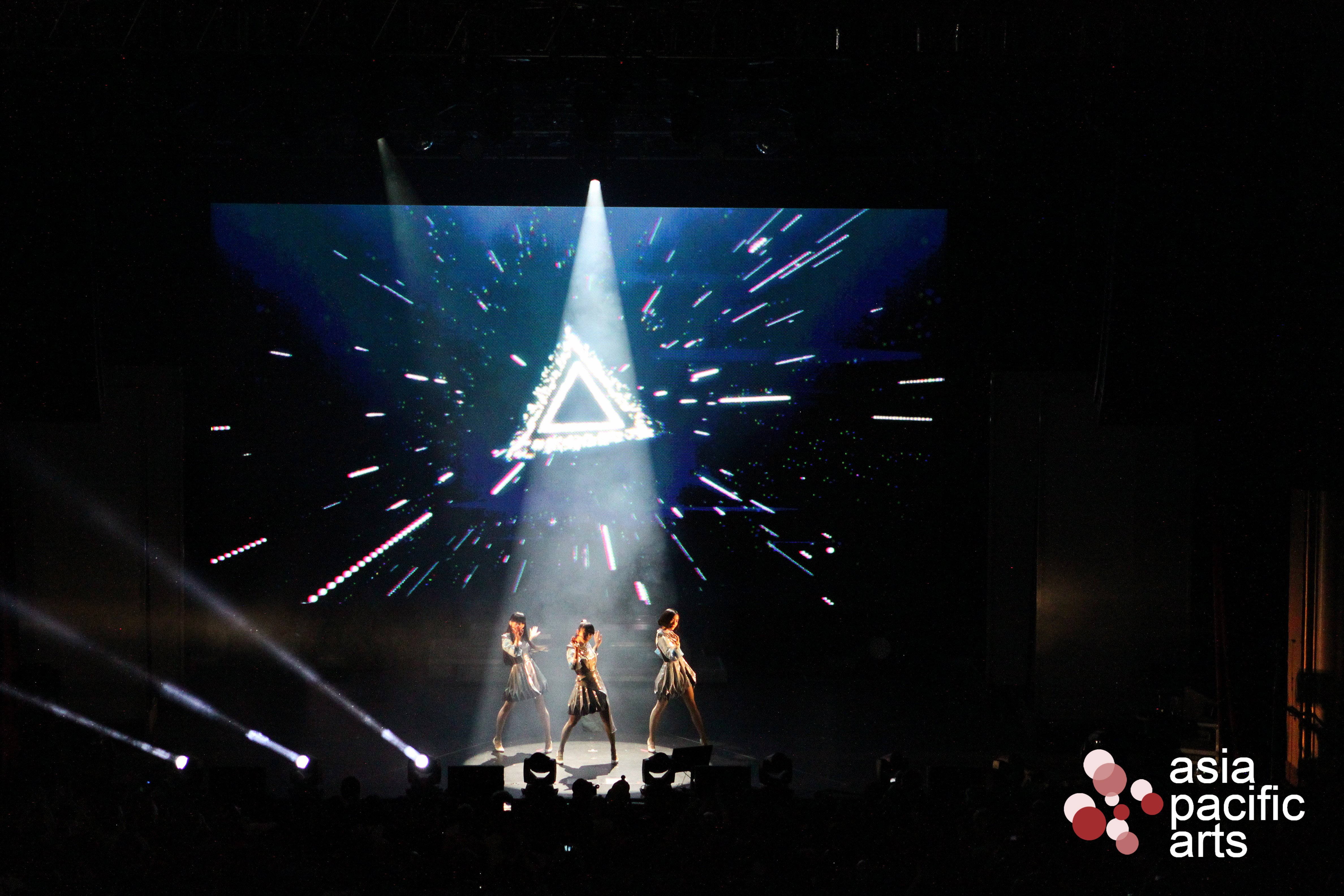