Eisner Award winning mangaka Naoki Urasawa spoke at Japan House on January 23 to kick off his exclusive exhibition with Japan House Los Angeles. The accomplished artist has traveled around the world many times, but has never hosted an exhibition in the United States before. Fans were not only treated to Urasawa’s creative process, but also to his more personal opinions on the manga industry, music, and his own work. 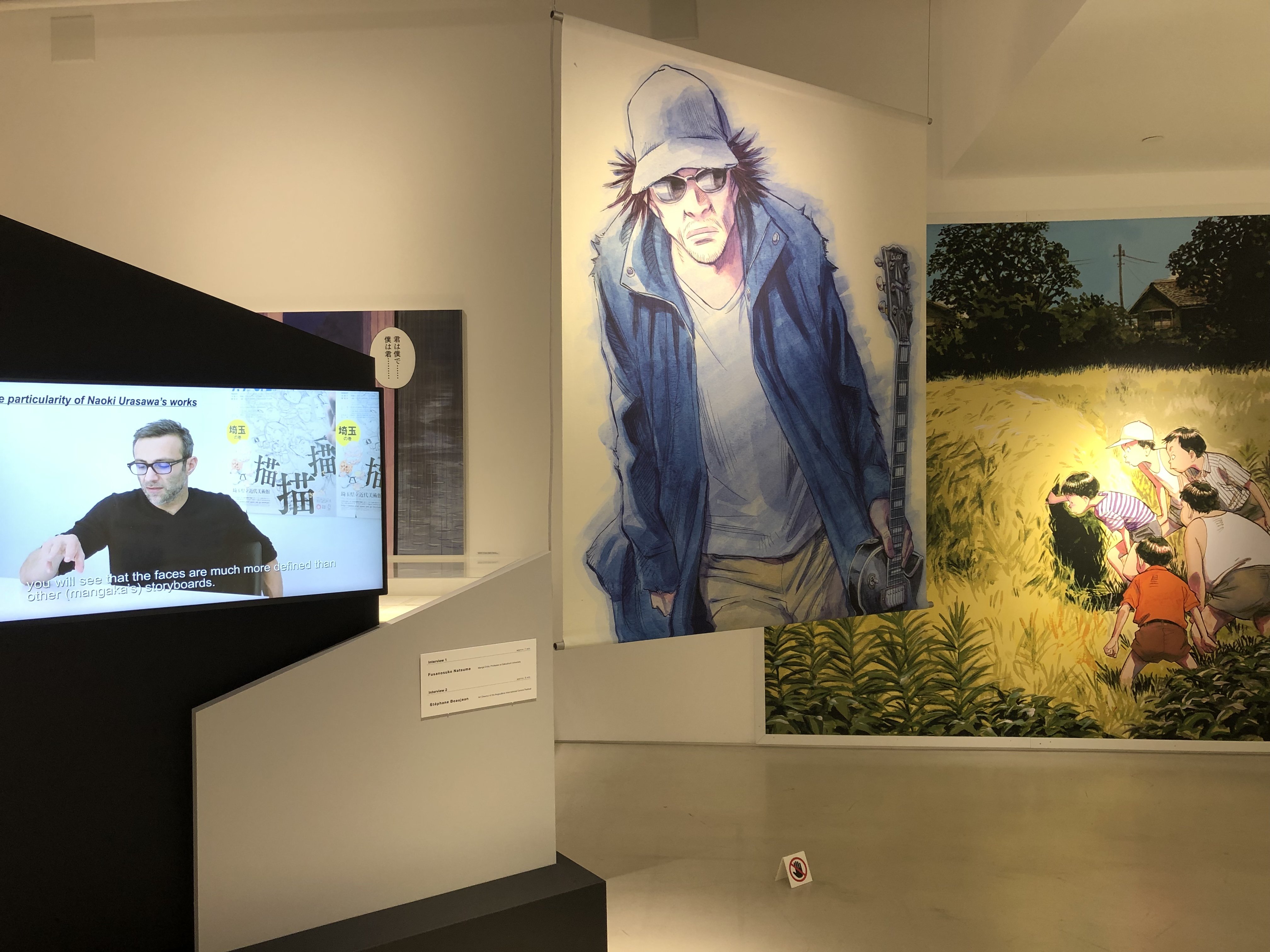 Inside the exhibition holds drafts, finalized copies, and a variety of all of Urasawa’s work. From 20th Century Boys to MONSTER, new and old fans can enjoy the detailed artistry of their favorite series or series that haven’t been available in English like Yawara! and Billy Bat. But with all the work on display, some of the most interesting pieces in the exhibit were the detailed explanations of how he came to draft the stories from start to finish. Frederik L. Schodt, who was the original translator for Urasawa’s PLUTO, hosted the talk, and both acquaintances discussed their experiences and Urasawa’s strong opinion on digital manga.

Below are highlights from the talk taken from live tweets at the event.

Q: Some people have as many as 16 assistants. What do you have your assistants do?

Urasawa: Inking, spotting, framing is the most fun part, so I reluctantly give it to someone else. Especially for the hair, I’ve done that for the past 20 years. 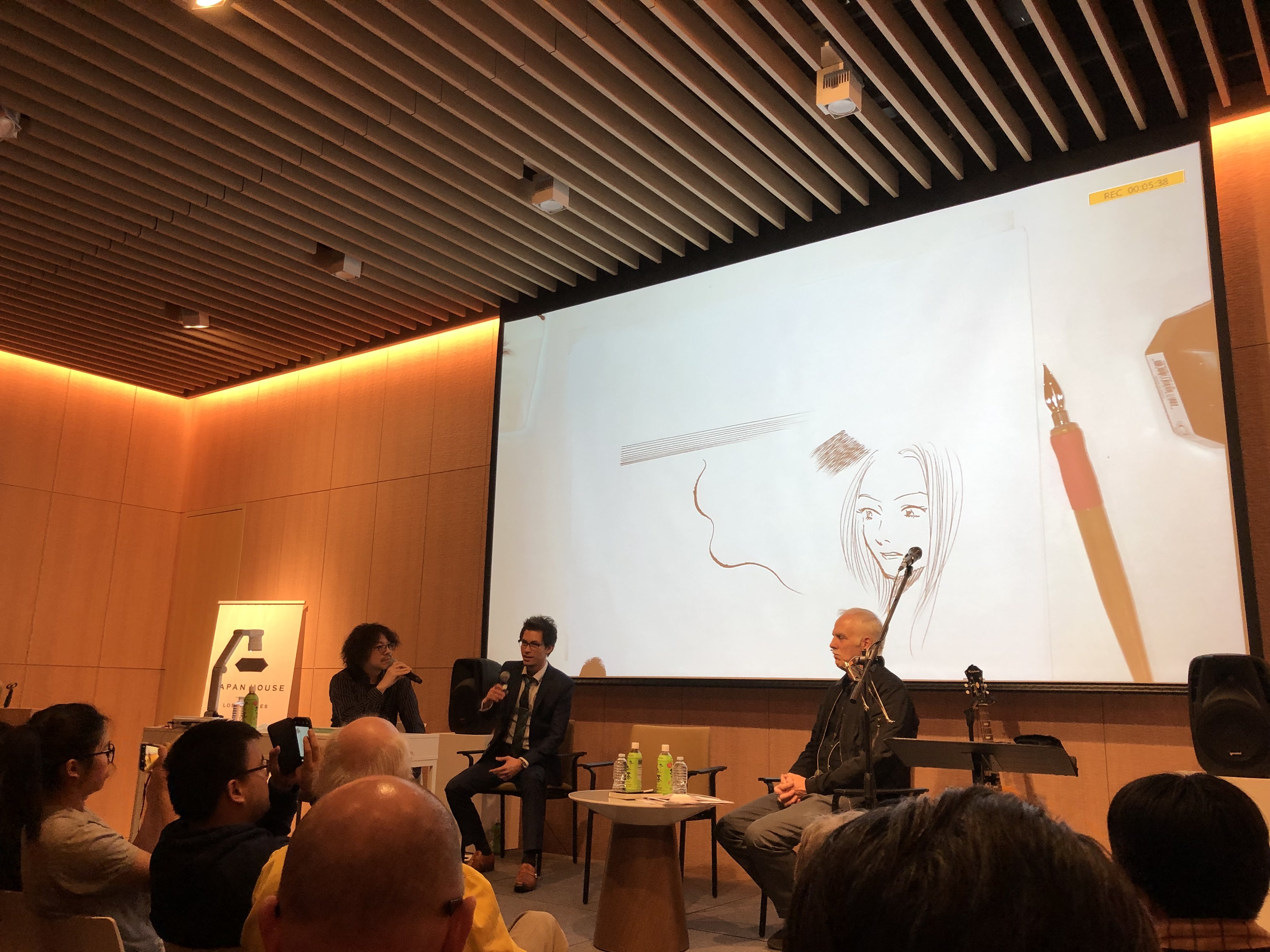 Q: What is it like to work for you at your studio?

Urasawa: Until you can draw and have the edges fade out beautifully, this is the drill if you work at my studio. The other is when you draw them to make the lines look identical. Until you’ve mastered this, I don’t let you touch my manuscript. Assistants don’t work more than 3 years. We don’t want to take care of them in their 40s. But this colleague of mine tells his assistants, “If you really can’t find a job, we’ll help you.” He has 13 assistants now. Takao Saito, who’s now about 80, told me one of his assistants has a grandchild now. Some of my assistants have moved onto very successful jobs. All those drills I showed them did not go to waste.

Urasawa: 20th Century Boys happened when I was taking a bath. Some UN rep over the radio was saying “If not for them, we would not be in the 21st century right now.” So I wondered, “Who’s they?”


Q: Do you ever feel like the gods of manga are controlling your hand?

Urasawa: There are moments that it feels like it’s not my own hand that’s doing illustrations. After I’ve seen certain lines, I think, “There’s no way I could’ve drawn something so good.” 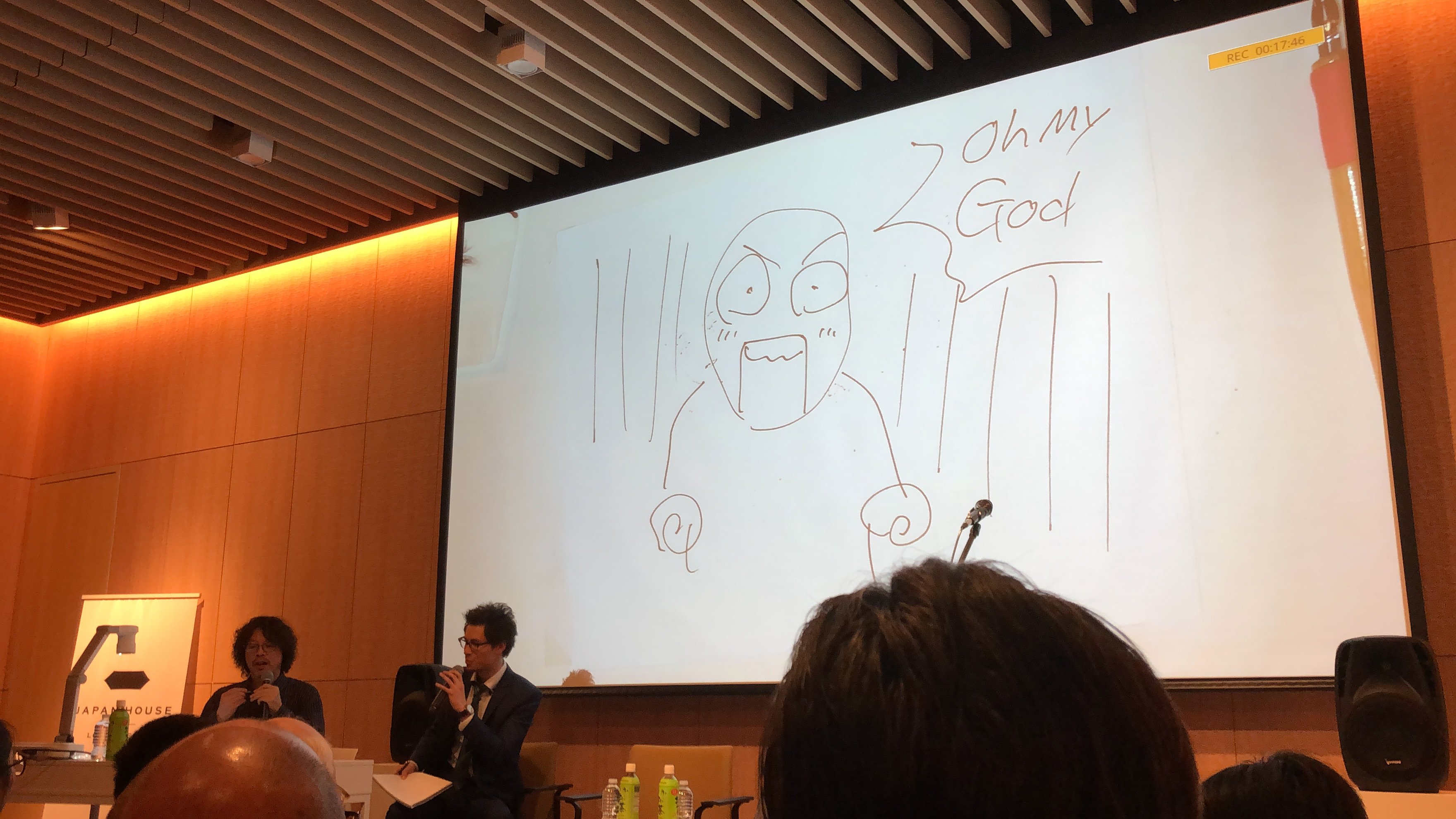 Q: People are reading manga on a pound basis rather than a page basis due to digital manga. How do you imagine manga going forward?

Urasawa: There are artists who actively deny digital like Inoue Takehito, Morikawa Jyoji, and Mizushima Shinji. In manga, when you’re on the bottom left, the reader is going to want to turn the page, which is why that panel is so important. For a weekly manga, you have to make people want to read the next page, so we have to be able to have an exciting last page. Typically, this image would be a two page spread. So when you’re flipping from that first page to here, it’s towards the most amazing scene. On a smartphone, it looks like this. I can’t imagine it being exciting. So although it’s a huge technological advancement, the art you see inside of it is devolving.

Q: Many of your works have been made into anime and live action films. Your manga is like a movie to those who read them. Do you have anything you can say about your opinion on any films in development?

Urasawa: I believe that when I complete a manga, it’s complete in its form. We get a lot of offers, but I can say with confidence that I don’t think they’ll make it better than my manga. During lunch, I met with some Hollywood people who will go unnamed and talked about this subject. What happened is a secret. 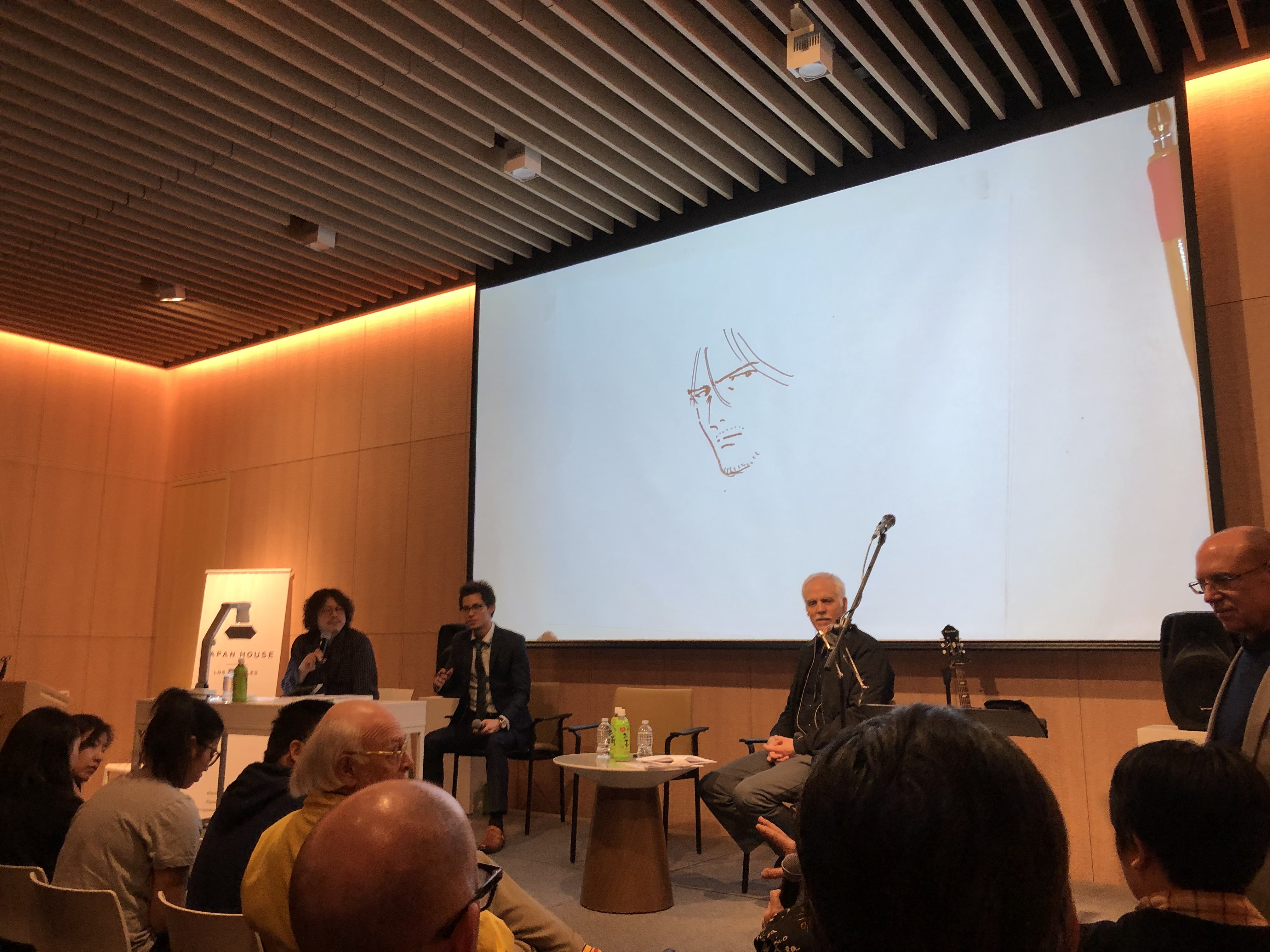 Q: Why did you switch to a female character for Mujirushi? The previous work you had was a male lead.

Urasawa: When I was drawing Kasumi, I had a lot of fun. It put things into perspective, that I drew a lot of hard boiled dudes. Maybe I should try females. I can’t tell you how many times I’ve drawn something like this. I want to give my eyebrows a break.

Q: When you talked about letting characters talk and write themselves, when you build those characters, are they coming from people around you?

Urasawa: The way I see it, I ask them (characters) what they would be doing in these scenes. There’s a small reflection I see in these characters. It reminds me of Shogi, like the Knight, this piece is the most fascinating. He can’t attack this enemy and using the piece is a huge pain but makes for a fascinating setup.

Q: What will it take to translate some of your works that haven’t been translated yet?

Urasawa: I can’t help but agree with you. I think the power is in your hands. Fans should write to their representatives, the White House, etc.

In the last 20 minutes of the talk, Urasawa performed a small concert for the crowd. Before he began strumming his guitar, he noted that he feels an “opposing wind” at times, because people question why a manga artist would be playing music. He claims that music is what he grew up with and what he knows, and continues to play at his leisure. While he let some of his guitar chords play on loop, he drew a visual to represent the image from his song, titled “Red Berries.” Unfortunately, the song is currently unreleased but will probably be available on iTunes in the future.

Ending the show, Urasawa encouraged the crowd to sing along to “Gutalala Sudalala,” a simple song sung by Bob Lennon of 20th Century Boys and of which he also performed in France at Japan Expo. Waving goodbye to the crowd, he gave an “otsukare (good job)” to his LA fans for not losing to his fans in Paris.