For any artist, to be a panelist at San Diego Comic Con is a dream come true. For Kohei Horikoshi, the manga author behind the world renowned My Hero Academia, it was an adventure of a lifetime. At his first official U.S. convention, he wanted to tell the crowd a little bit about himself, while sketching some of the characters from My Hero Academia. Enthusiastic fans lined up early in the morning to try and get his autograph, and immediately after, they ran to line up for his panel. Unfortunately, the panel room was not large enough to accommodate all the people who lined up, leading to more than half the line being turned away. Luckily, Horikoshi drew a special sketch to the SDCC attendees who couldn’t make it into the panel.

Despite being a shy person, Horikoshi energetically greeted his fans without his usual mask on. After a Q&A with representatives from Viz and the American voice actors, the rest of the panel was devoted to introducing the man behind the mask. While he was answering questions, he sketched an image of Deku who was raffled off in a game of rock, paper, scissors at the end of the panel and one lucky cosplayer took it home. 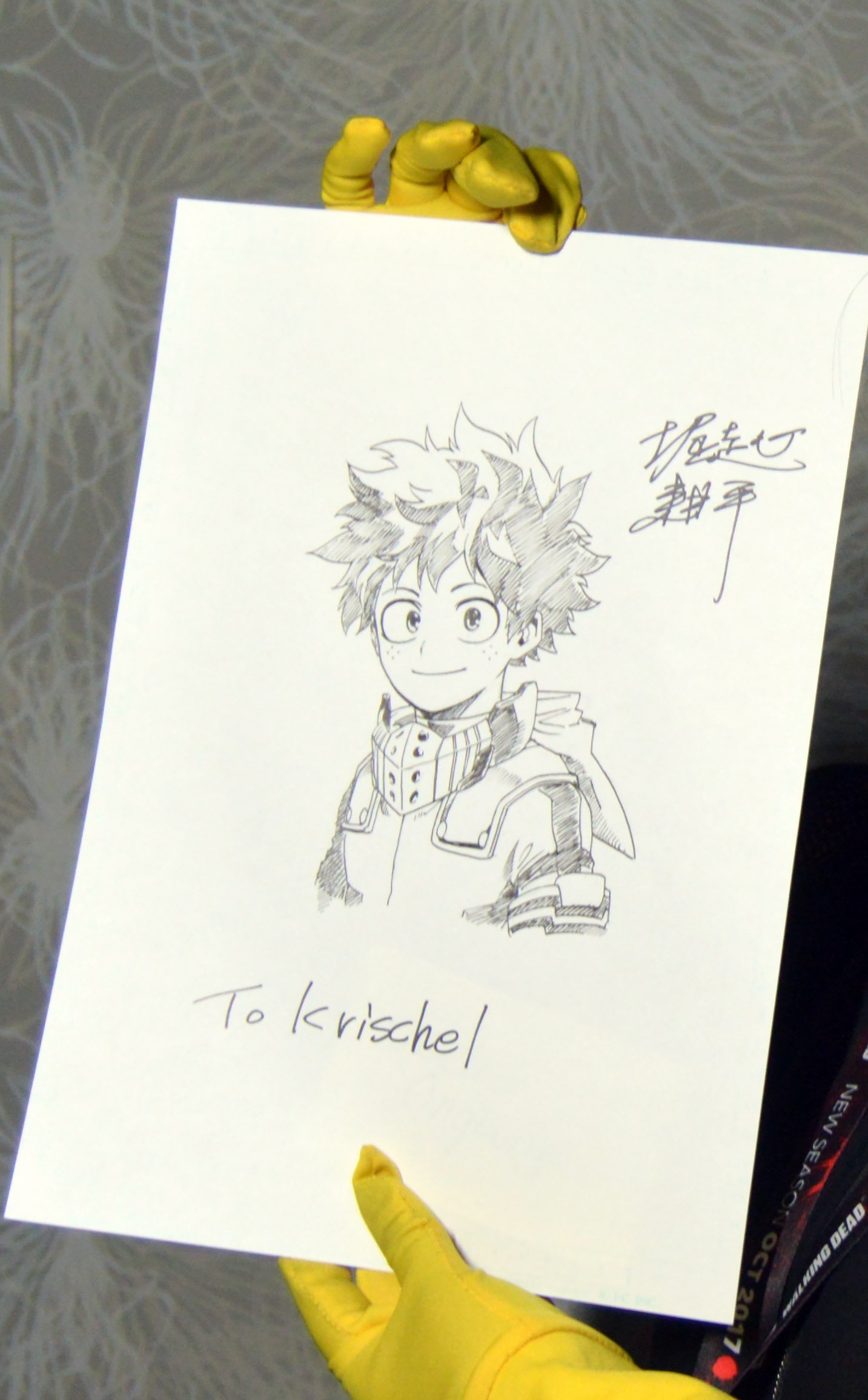 Q: You have one of the hottest manga and anime in Japan and in America right now, which is hard to do. How does success feel?

Horikoshi: Actually, I’ve had to put myself into the reality of this. But now that I’m in this room and seeing all of you, it’s starting to really to dawn on me that I have so many fans over here.

Q: Why did you want to become a manga-ka?

Horikoshi: I’ve always liked drawing ever since I was in grade school. I wondered, “What is a career that involves drawing?” And I found out that manga-ka get paid to draw and that was a job, so that’s why.

Q: How did you get on the idea of making a manga about superheroes?

Horikoshi: I grew up watching superheroes, anime, manga. Those characters are something that I look up to. So naturally, I would make my manga about them.

Q: Who is your favorite American superhero and why?

Horikoshi: Spiderman. First and foremost, the character design never gets old. They always keep his design fresh. The second thing about Spiderman is that he’s very relatable.

Q: Your character designs are superb and very distinctive. Can you tell us about your design process? Where do you start?

Q: Which character in the series do you most relate to and why?

Q: How the heck did you come up with a character like Mineta? Where did you find inspiration?

Horikoshi: I thought that a hero is someone who gives you anti-anxiety just from their presence, just from their existence. However, over the course of my work, that’s changed. The more I work on the series, the more I think the answer to that will change.

Q: If a rock-looking character married a bird-headed character. What would it look like?

Q: If you could have a quirk from a character in the manga, whose quirk would you choose and why?

Horikoshi: Todoroki. I hate the heat, so instead I would have a built-in A/C. It’s helpful for cooking too!