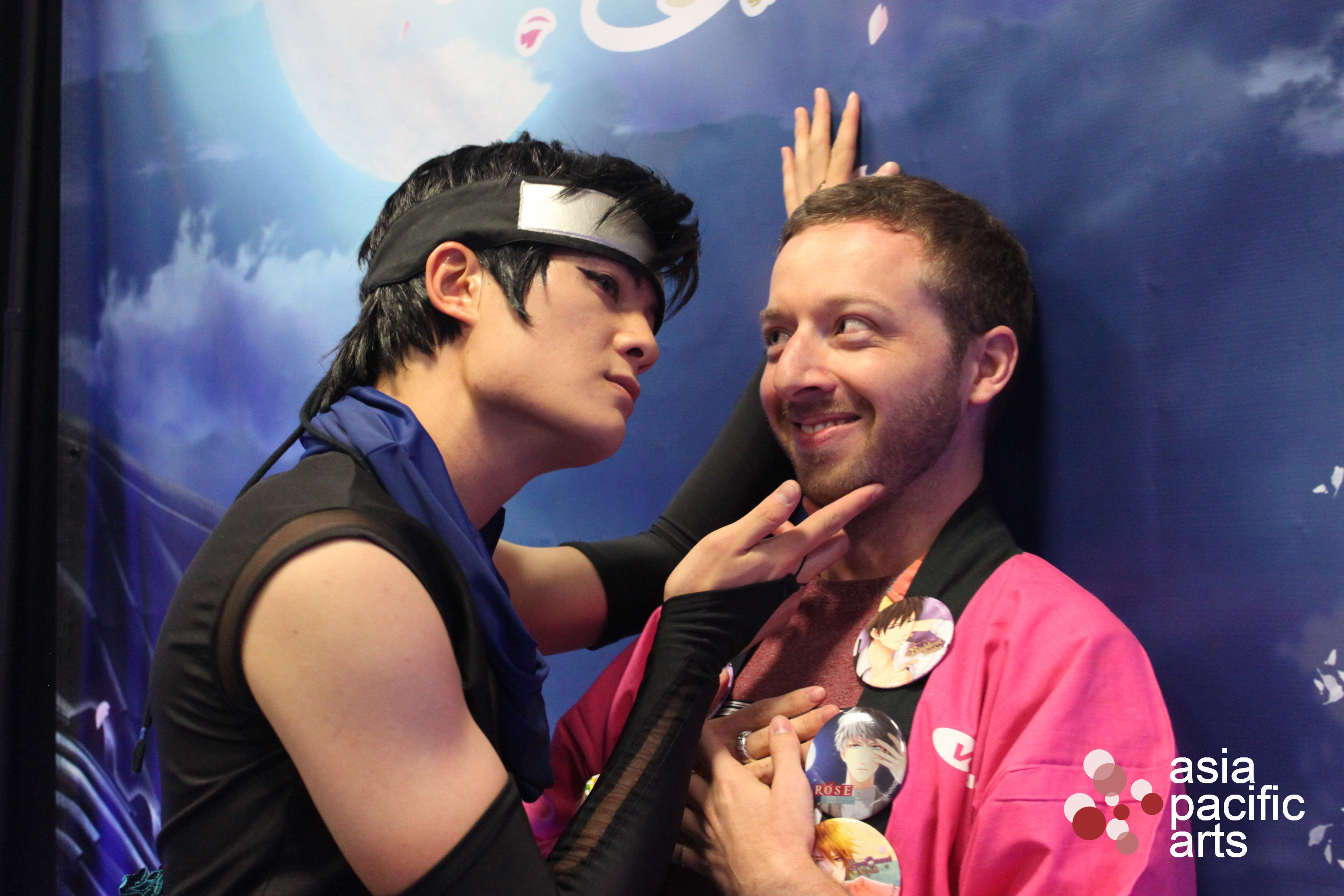 Ranked among Japan’s top buzzwords in 2014, kabedon continues to remain prevalent in pop culture, though some might consider it cheesy. Experience it for yourself and you might feel differently.

At Anime Expo 2018, otome game developer Voltage decided to bring their game experience to life by sponsoring the convention’s Butler Café. Upon entering, laughter and chatter spilled through the open doors, as charming men entertained attendees with performances and games. A snaking line of eager people around the room leads to a kabedon booth where Sakuya Fujibayashi, a stoic ninja from Voltage’s “Samurai Love Ballad Party” pins people to a wall and delivers intimate one-liners.

Why would you want a random guy to pin you against a wall? That sounds kind of weird, right? The long line of people would say otherwise. A girl stepped forward for her turn, as Sakuya advised her friend on where best to stand for the best angle to film. He leaned forward to gaze into her eyes, naturally placing one hand on the wall behind her. Using his other hand, he plucked her glasses off her nose and casually tossed it to the side. The line audibly gasped and in a deep voice, he whispered something that likely nobody remembers because of how intimate and tense the moment was. And with that, her turn was over. Her friend who was simply a spectator filming could barely utter, “I’m shaking.”

We chatted with Ryan Patterson, chief localization producer at Voltage, to learn more about kabedon, other power moves and what’s setting hearts aflutter in otome games. On kabedon, Patterson shared, “So, I’m not really a romantic person. I love my fictional romances, but I wouldn’t say I’m a romantic person in real life. But when we were practicing for the kabedon booth and he pinned me against the wall, my knees actually went weak. And I was like I get it. It’s an incredibly intimate moment. You can’t go anywhere, he’s so close to you, he’s looking into your eyes, he’s got his hand on your chin and it’s all just a lot. You don’t know what to do with yourself and your mind goes blank. I’ve never had an experience like this in my life.”

With the popularity of kabedon, other moves have also been hits with otome game audiences. “Don is the sound of hitting something, so sometimes we’d have the heroine leaning on a table or sitting on a chair and have the male character lean over the female character who would ‘don’ things a different way. Another good one is agokui. It’s basically when the male character grabs your chin and brings you closer to his face. It’s so sexy, it’s really good,” said Patterson.

Kabedon is just something that isn’t common in regular life, so butler cafés like this one and otome games are spaces to experience the unique heart-racing situation. Voltage now offers their otome games in one portal app, Love 365: Find Your Story, where players can select which games to play from numerous options all stored in one place. Let us know if you find that kabedon makes your heart skip a beat.