Set in a charming and colorful storybook-esque world, Little Dragons Cafe has players farming, harvesting ingredients and preparing meals for various customers — all while a cute dragon follows closely behind. 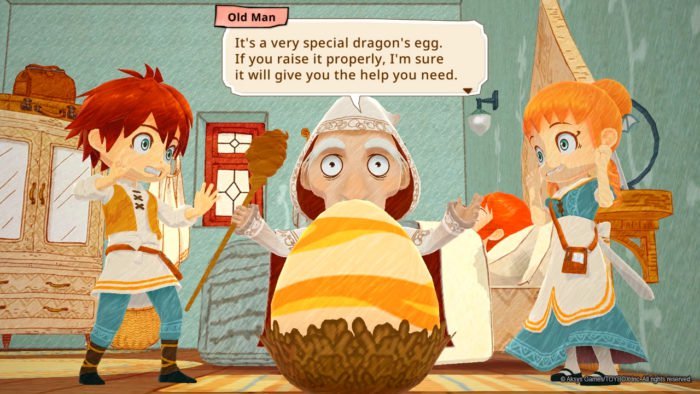 APA: After creating numerous Harvest Moon games, what have you learned from those games that you used to do something new or better in Little Dragons Cafe?

Yasuhiro Wada: Rather than to make it better, I changed the way I make games.

APA: From the interior of the twins’ house to the lush greenery of the world outside, Little Dragons Cafe is so colorful and warm. Can you share with us how you went about imagining and building this world? Were you inspired by anything?

Wada: In regards to the art style, I worked long and hard with the character artist Igusa Matsuyama to create it. I wanted to express this game in its own unique way that is neither photorealistic nor like that of a normal cartoon. I wanted to make use of the picture book-like hand-drawn art style as much as possible, and turned that style into 3D.

APA: In addition to farming and cooking, the game progresses through your character building relationships with the customers you serve and taming monsters. I feel like this approach to advancing in the game really helps fuel the warmth of the game. Unlike other games where you kill monsters, why did you decide to have players tame them?

Wada: I’ve always loved dragons, but in most games, they only appear as enemies. So I thought, “Why not have a game where the dragon is your important pal that you go on adventures with?” and that’s how the game turned into the way it is now. I believe the game heavily touches upon the theme of “coexistence” as well.

APA: With all the cooking that goes on in the game, is cooking something you enjoy in your personal life? If so, what are your favorite dishes and are those recipes included in the game?

Wada: I love eating all kinds of food, but unfortunately, I’m not very good at making them myself. Creating things is what I put my time into the most, however I do other things like play games, play the guitar, watch movies, read books… A-Anyways, there’s so many things I want to do, so I’m usually just eating food gratefully.

APA: What aspect of the game are you most excited for players to experience and why?

Wada: I touched upon it earlier, but I put the most strength into the art style and the story of the game. I think anyone can immediately tell how much effort I put in regards to the art style by looking at it, but as for the story, I don’t think people will understand without playing through the game. I would really like for people to play the game until the end, and to love the characters that appeared in the world of Little Dragons Cafe.

For North America, Little Dragons Cafe is coming to Playstation 4 and the Nintendo Switch on August 24.