Illustrator and manga artist Bisuko Ezaki made his first visit to LA as a guest at Anime Expo 2018. Even from a distance, you can easily spot Bisuko, dressed from head to toe in pink. But what you might not realize until you’re face-to-face is that his pastel pink pants have a white noose on one leg pant and a trail of pills on the other. Bisuko’s fashion style is called “yami kawaii,” which directly translates to “sick cute” in English. In other words, it’s a style that appears cute with something a bit darker, often including imagery related to mental health. Bisuko not only expresses yami kawaii through fashion, but also in his visual art. He is also creator of Menhera-chan, a manga that follows Menhera-chan, who transforms into magical girl by wrist cutting and fights with a box cutter knife.

APA sits down with Bisuko Ezaki to discuss his yami kawaii fashion style, Menhera-chan and what projects he’s got planned next.

APA: How has your time at Anime Expo been? How was it modeling for ACDC RAG at the AX fashion show?

Bisuko Ezaki: It’s been so much fun. I was very nervous since I didn’t have walking training and hadn’t yet decided on what poses to do, but people cheered me on and I was able to pose naturally. People praised me, so I was glad that I was able to do well.

APA: Can you tell us about your outfit today?

Bisuko: As usual, I’m dressed in all pink. Even if everything’s pink, I like to wear a lot of different tones of pink.

APA: What does pink mean to you?

Bisuko: Out of all the colors, pink is definitely the color that represents cute. No matter who looks at it, people think pink is cute. Also, pink has the image of love and happiness. When I wear pink, it lifts my mood and makes me happy, so that’s why I like it.

APA: Aside from kawaii, how would you describe your style in three other words?

Bisuko: I’m not interested in things that are simply cute. To be kawaii, I think it has to be cute plus something else. For me, I like to combine cute with dark-themed things because mixing the good with the bad results in something interesting. It’s like haraguro, something that looks cute on the outside, but it might be totally different and dark inside. I also like to combine cute with the elegant look, so sometimes I have accessories with gold chains or glitter. And I’d say, my style’s gender free. 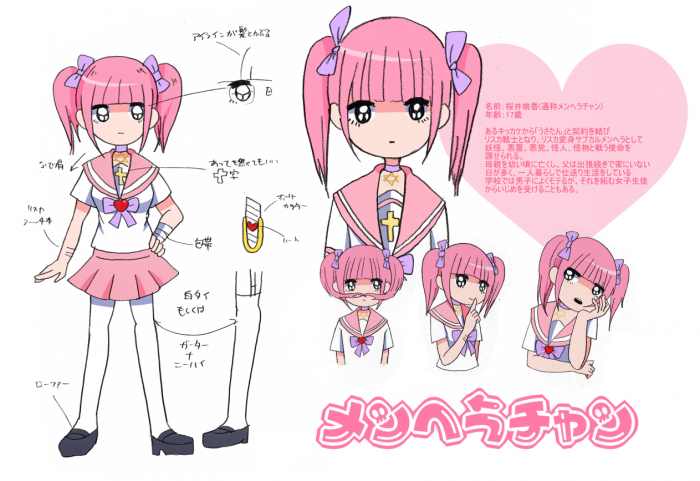 APA: How did your comic Menhera-chan come to life?

Bisuko: Menhera-chan was a character I created when I was preparing for my college exams. At the time, I was living more out in the countryside and things weren’t going well with my personal life, which is how wrist cutting Menhera-chan came to be.

APA: I saw a photo of your room and saw that you have an impressive Powerpuff Girls collection. Your comic Menhera-chan also features three girls who fight evil. Do you like magic girl-type characters?

Bisuko: Like what I mentioned before about cute plus something else, I like that the Powerpuff Girls are cute, but they’re cool because they can fight. I like that gap, which makes their characters so much more impactful. That’s the same way I look at Menhera-chan. She’s small and cute, but she’s strong.

APA: Many of your fans like that your comic addresses depression and suicide. How do you go about doing that through your comic? 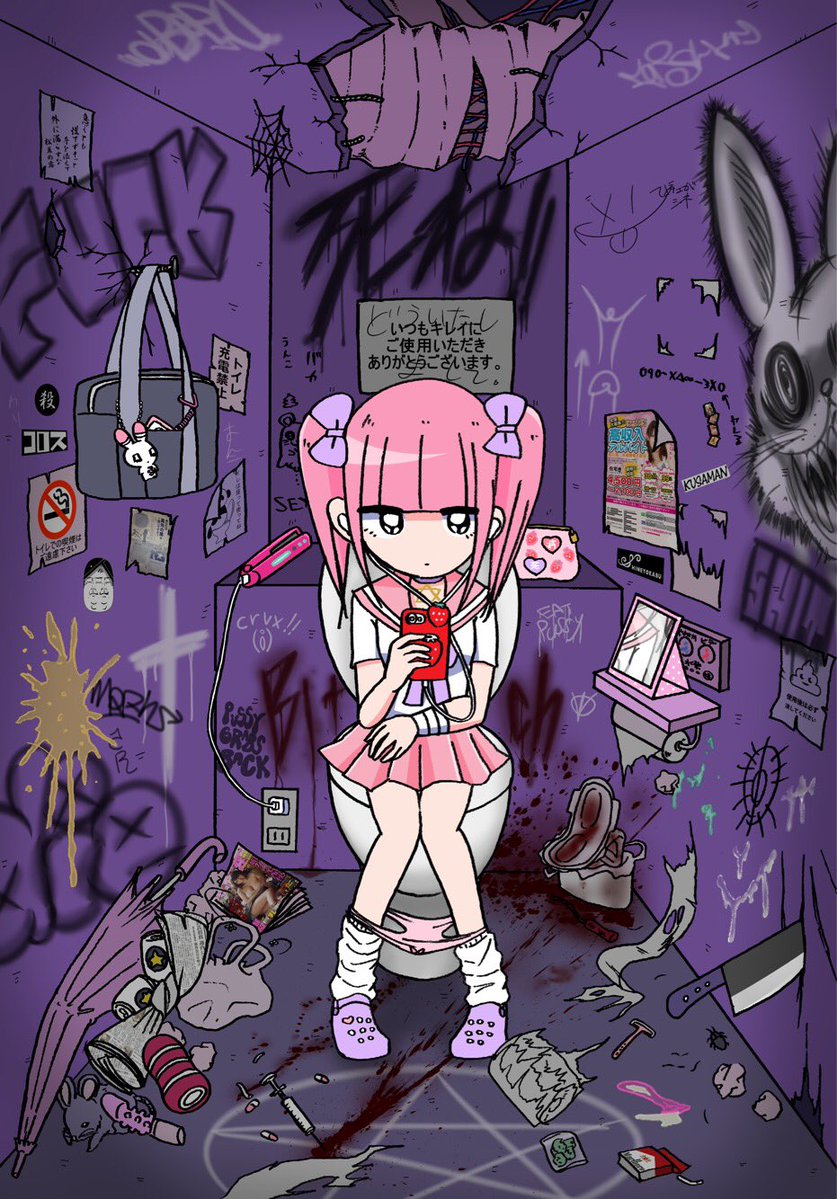 APA: I’ve read some English comments on the Internet from people who are concerned that your comic might be glamorizing suicide and depression by depicting them through cute characters. What are your thoughts?

Bisuko: I don’t worry about that. I think that it takes a very deep pain and a lot of courage to commit suicide and I don’t think my work inspires that. My fans usually pay attention to the dark, underground culture of yami kawaii, so they understand my concept and take the good parts of it.

APA: What do you have planned next?

Bisuko: Maybe Americans only know about myself and Menhera-chan, but I’m working on a few other projects. My boyfriend and I made an essay about ourselves, which will publish around the end of this year. I hope to continue making more characters and make a big family like Sanrio. 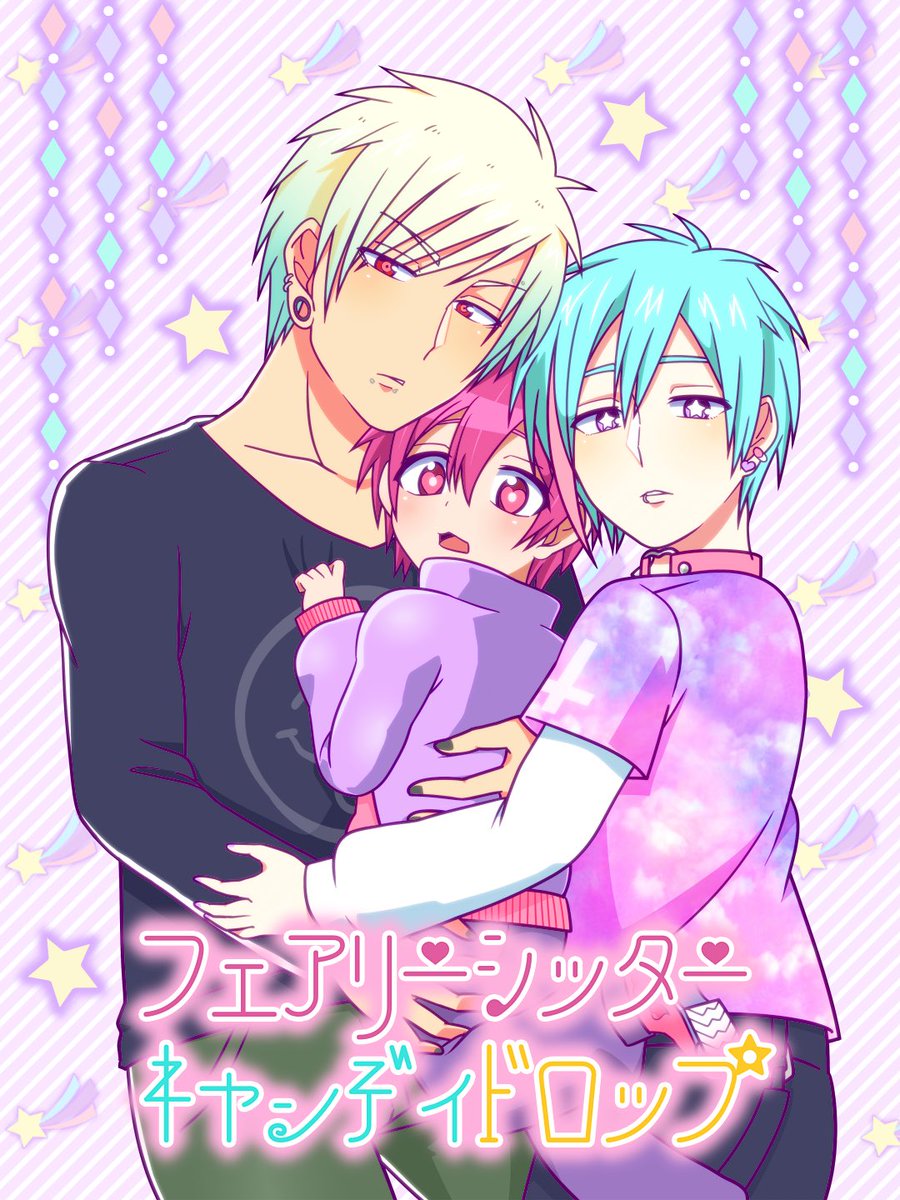 Bisuko: My favorite is Menhera-chan, but I also really like my character from Yumekawa Boys, a comic I started a while ago, but haven’t been able to write recently. I want to hurry and finish Menhera-chan, so I can focus on Yumekawa Boys.

APA: Can you tell us what Yumekawa Boys will be about?

Bisuko: The two main characters have been trying to get into a university for fairies, but failed the entrance exam. So, they are sent to earth to babysit a child, who gets kidnapped. It’s up to them to save and protect the child. It’s cute, but it’ll also have some action too. I’m really looking forward to working on this story.