Japanese pop singer Kyary Pamyu Pamyu, well recognized for her eccentric kawaii style, made her umpteenth return to San Francisco this June bringing her Halloween show “The Spooky Obakeyashiki ~ Pumpkins Strike Back~.” The show opened with a video of Kyary getting ready for the concert in her dressing room, all dolled up in a cute pink dress. Suddenly, three Japanese demons appear in her room and request that she use her show as an opportunity to let the world know about Japanese demons. They jealously point out that Kyary has featured Western monsters like Frankenstein in her music videos, but not any Japanese demons. She initially refused their requests in favor of holding a cute show, but since they threatened to curse her and the entire audience, Kyary reluctantly complied. With that, they transformed the stage lighting to an eerie purple and transformed Kyary’s outfit into something more spooky.

The curtains parted to reveal a traditional Japanese haunted house with the three demons looming over the roof. Raising a lantern staff, Kyary appeared on stage in an ornate red lantern-patterned dress with a large matching hairpiece. Fittingly, she opened the show with “Fashion Monster.” Keeping the high energy up, Kyary moved into “Invader Invader” and “Candy Candy.” She was also joined on stage by a dancing Nurarihyon, the demon who takes the form of an old man with an elongated head.

Dancing with a lantern light stick in hand, Kyary had the crowd jumping along to “Saigo no Ice Cream.” The audience was at its most synchronized when the singer performed “Harajuku Iyahoi,” as fans chanted the lyrics and waved their hands to the infectious beat. The performance that perfectly fit the show’s theme was when Kyary sang “Koi Koi Koi,” while dancing with Kyuubi, the nine-tailed fox demon. The song’s tinkling and hypnotic melody coupled with Kyary’s dance duet with the fox looked like something out of a haunted fairytale. 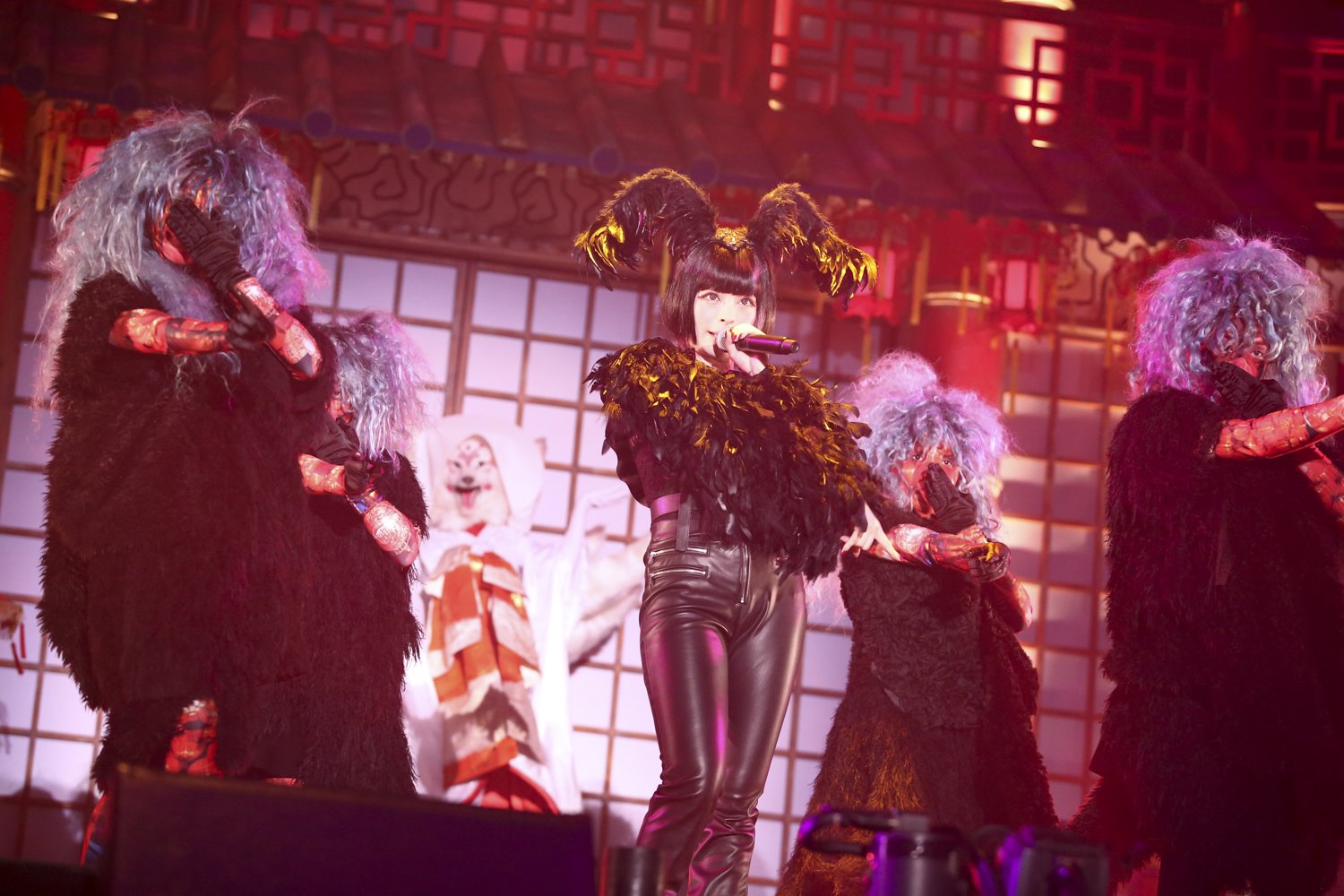 As always, Kyary’s backup dancers were incredibly energetic and let loose during a dance break to a bass heavy remix of a traditional Japanese melody. Returning to the stage, Kyary appeared in a black crow-inspired outfit of skinny pants, feathered sleeves and a headpiece shaped like wings. This particular outfit was quite striking as it largely differs from Kyary’s usual bright and colorful dresses. The singer continued to surprise as she suddenly tore off her feathered sleeves and jumped into a breakdance routine before performing “Mondai Girl” and “Ninja Re Bang Bang.” Heading toward the end of the show, Kyary batted her lashes in “Tsukema Tsukeru” and taught the crowd the dance moves to “Sai & Co.” To cap off the night, there’s no better song to close the show than her Halloween-themed song “Crazy Party Night.”

After a very long call for encore, Kyary returned in her cutest outfit of the night; she calls it “the happy exorcist,” as she’s dressed in a pink top with a skirt adorned with multi-colored iridescent shide, zig zag-shaped papers that are often seen at Japanese shrines and used for purification rituals. She showed off a new side to herself with her latest song “Kimi no Mikata” and finished the night off on a high note with her hit debut track, “Pon Pon Pon.” 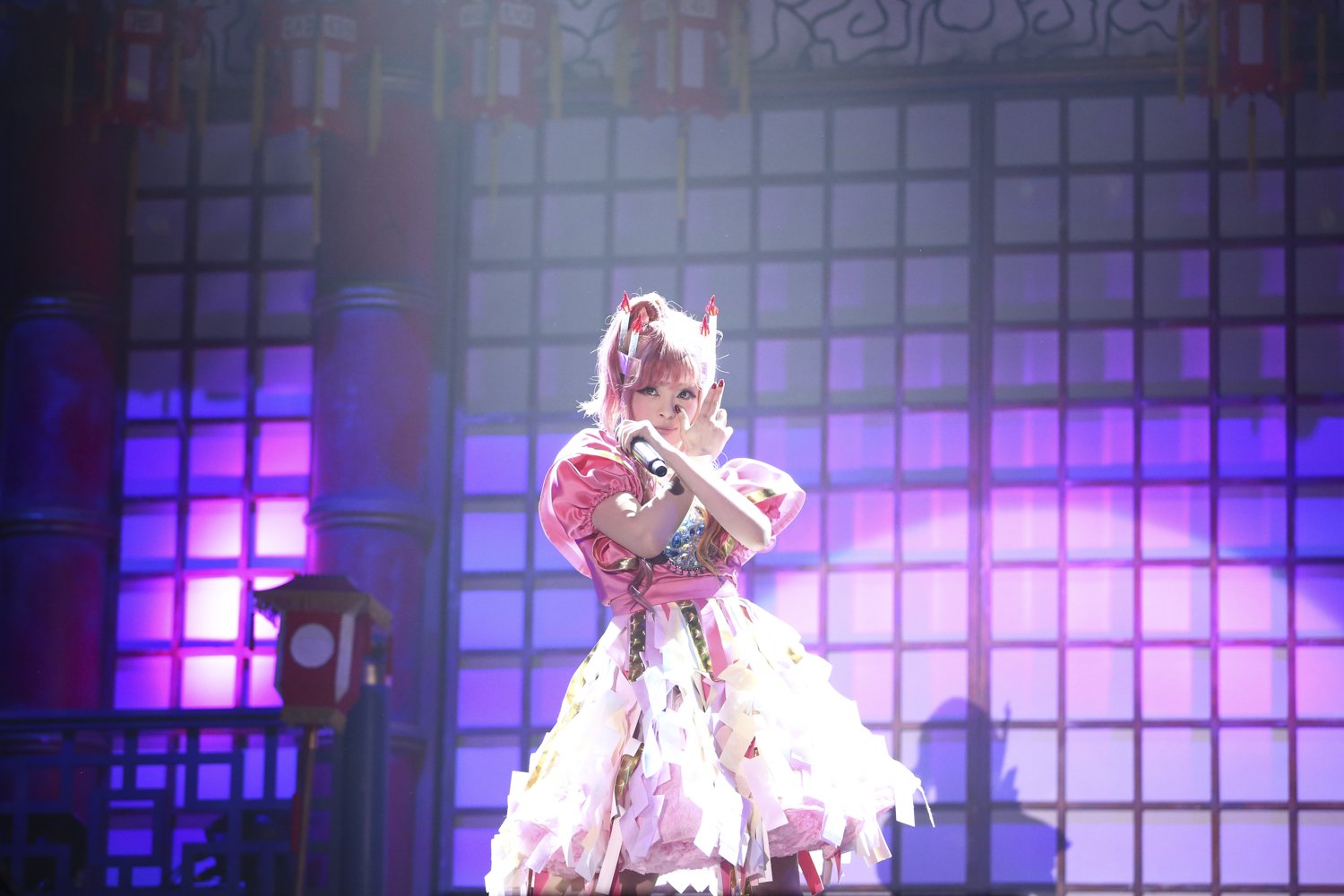 Each time Kyary has returned to San Francisco, her shows have grown more spectacular and this year’s was her most captivating yet, putting on a show with an intriguing theme and telling a story through an impressively designed set, creative costumes and most importantly, engaging performances. Frankly, Halloween has never looked this cute, yet weird. Kyary’s unique concoction of adorable and bizarre keeps pushing the boundaries of kawaii and we’re excited to see where else she’ll take us.

All photos courtesy of Asobi System